Major news networks such as CNN, MSNBC, and ABC pushed back on the idea that the country is in a recession and touted strong economic indicators.

Media outlets that are engaged in semantics over whether the U.S. is in a recession are “missing the boat” and hurting their own credibility, economic experts tell Fox News Digital.

The Washington Post, CNN, The New York Times and others embraced the White House definition of a recession on Thursday after GDP numbers showed consecutive quarters of negative growth as the U.S. economy enters a recession, and pundits on CNN, MSNBC, CBS, ABC and elsewhere also played up the notion of “fears” of a recession, rather than acknowledging the U.S. was now, by definition, going through one.

“They’re playing the game of are we in it or aren’t we? And that is totally missing the boat. And because people have been living through it, they know that the media is missing the boat,” said Brian Brenberg, a professor of business and economics at The King’s College in Manhattan and a Fox News contributor. “So that’s why it hurts their credibility, because this isn’t theoretical. This is very practical.”

CNN’s front-page headline described the news as crossing a “symbolic recession threshold,” and its report also used “fueling recession fears.” The report described the technical definition of a recession as the “unofficial” definition. A Business Insider story Thursday, headlined, “Today’s GDP numbers don’t tell us if we’re in a recession – and we won’t know for sure until we’re already in the middle of a crisis,” said the GDP figures didn’t provide “clarity” on the state of the U.S. economy. 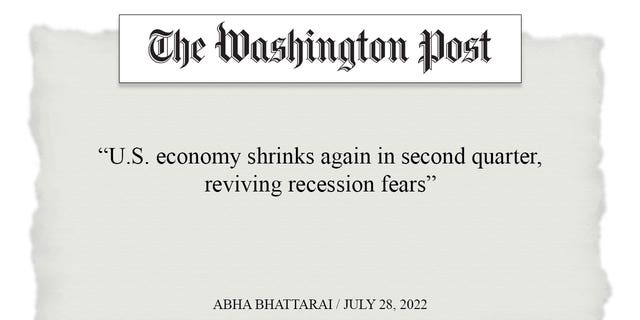 CNN’s left-leaning White House correspondent John Harwood was criticized after he retweeted a Politico article this week, whose author Ben White commented, “The White House is pretty obviously right that even two quarters of shrinking GDP would not show the economy is currently in recession.” Yet, Harwood, then with CNBC, tweeted during the Trump administration in 2019, “recession = economy shrinks for two quarters.”

“Under Trump, it was important to speak truth to power and not have alternative facts,” the conservative Media Research Center’s Scott Whitlock told Fox News Digital. “But now we see a willingness to just accept what the Biden administration says. A recession would be very bad news for Democrats going into the midterms. So journalists are all too happy to help Biden avoid using the R-word.”

On-air news segments from the liberal media saw anchors and guests push back on the notion that the U.S. economy is now in a recession, and instead made note of other strong economic indicators. In addition, some figures claimed the negative growth was a feature, not a bug, of the Federal Reserve’s plan to slow down inflation.

“This is going to be hard for people to hear,” John Berman told the table on CNN Newsroom. “This is the kind of reaction that Jerome Powell might want to see, which is things cooling off a little bit.”

MSNBC “Squawk Box” co-anchor Andrew Ross Sorkin made similar statements when he claimed that the negative GDP growth was “supposed to happen.” He added the word “recession” has become a “political football” that would determine midterm advertising against the Democratic Party. “CBS Mornings” co-host Nate Burleson similarly referred to the recession as a “buzzword.”

Other segments on CNN, CBS News, MSNBC, NBC News, and ABC News largely refrained from saying that the country is in a recession, pointing to job growth and consumer spending. ABC’s “The View” pressed White House press secretary Karine Jean-Pierre on the subject Thursday, saying there was a “disconnect” between how Americans feel and Biden’s rhetoric about there not being a recession.

“We had this strong economic growth because of the work that the president has done in the past 18 months, and now what we’re seeing is a transition into stable and steady growth,” Jean-Pierre said.

Fox News Digital previously reported on figures from the New York Times, Bloomberg, Associated Press, Washington Post, CNN and elsewhere who appeared to embrace talking points from an array of Biden economic figures attempting to preempt the likely poor second-quarter report. It found Thursday GDP shrunk by 0.9 percent on an annualized basis from May to June. 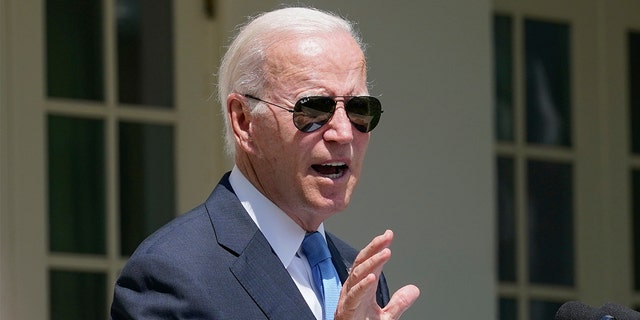 Brenberg said media members “splitting hairs” about the definition were damaging their credibility.

“I think the best indicator of recession is two consecutive quarters of negative GDP growth, because what that means is you’ve had a slowdown, a significant slowdown in the economy,” Brenberg said. “And I think, you know, all of the media hubbub about whether it is or isn’t is missing the point. If you’ve got two quarters in a row of the economy shrinking, you’ve got an economic problem. And everybody outside of the media knows that, everybody who’s not splitting hairs over definitions knows it. And so to try to play games with that, to me, one is not helpful, but two is not credible. People lose confidence in leaders who spend time splitting hairs about definitions.”

Brenberg said a recession happening in 2022 wasn’t inevitable but was a result of “big policy mistakes,” such as the $1.9-trillion American Rescue Plan President Biden signed after taking office, as well as the Fed not taking action on inflation last year, when many officials were still calling it “transitory.”

As Biden economic adviser Brian Deese noted last week, the GDP figures are “backward-looking,” but Brenberg said the notion that the figures stoked “fears” of recession fundamentally miss the point.

“Remember, the data we got today is backward-looking. It’s telling us what’s already happened. This is the point I think the media misses… The data today is saying recession has been here. It’s been here for six months,” he said. “So it’s not that people’s fears are getting stoked because you’re telling them about things coming. People already know. They already know how they’ve been spending. They already know how stretched their budgets are. They’ve been living through it.”

He called on the press to ask policymakers instead what’s the path forward to get out, rather than fighting a rhetorical battle.

KARINE JEAN-PIERRE SAYS U.S. NOT IN RECESSION ON ‘THE VIEW’: ‘A TRANSITION INTO STABLE AND STEADY GROWTH’

PRICE Futures Group senior market analyst Phil Flynn, a FOX Business contributor, said if it isn’t a recession, perhaps it should be called a “Bi-cession” in honor of Biden. 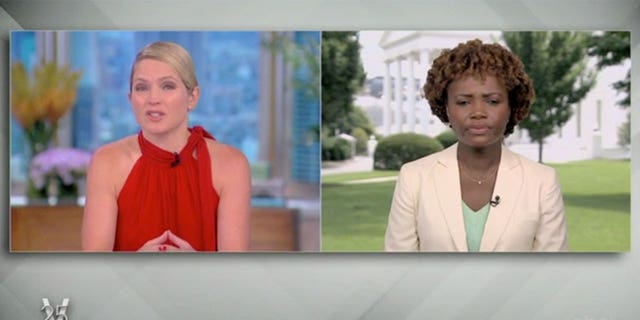 “I think it’s a silly argument, right? I mean, there’s no doubt that the growth is slowing. I do think there are certain sectors that are doing better than other sectors. But the sector that matters most to America, you know, is the average everyday American, right? And how are they doing?” Flynn said. “You’ve got record inflation. You’ve got a situation where you have people trying to make the decision whether they can afford gasoline or food. And, that’s really, you know, taken away from the fact that this jobs market is still relatively strong and wages are still relatively good. But, you know, it doesn’t matter if your wages are good, if everything’s more expensive.”

The recession news came the same week the Federal Reserve hiked interest rates 75 basis points for a second straight month, in an effort to cool down the economy and the record inflation hurting Americans. Flynn said Federal Reserve chairman Jerome Powell, who like the rest of the Biden administration seemed caught off-guard by inflation that’s dogged the U.S. for a year, seemed hopeful the recession would be temporary.

“He’s hopeful that the recession is mild,” Flynn said. “And if that’s the case, then the Fed’s going to look a lot smarter, I mean, in a few weeks. But if things start getting worse, you know, if we start seeing layoffs, if we start seeing, you know, companies like Walmart that are saying that earnings are bad or Target or some of these other firms start to lay off workers, that could put a real scare in the economy. We could get a much deeper recession, and the Fed can’t do anything about the government spending, right?”

The semantic battles over the term “recession” are secondary to how Americans actually feel, Flynn argued, and polls repeatedly show Americans list high prices and the economy as their chief concern.

“I don’t think they teach economics in school the way they used to, and I don’t think the average American cares, you know, what the technical definition of a recession is,” he said. “They don’t. They want to see if their lives are getting better.”