The map that reveals the American dream is over? Salary needed to buy the median US home is now $76K – and the typical family cannot afford a house in 35 of country’s 50 biggest cities

A family making the median national income can no longer afford the typical house in 35 of the country’s 50 biggest cities, according to a new study.

Based on home price data from the first quarter of the year, the salary needed to afford the median US home stood at almost $76,000 – roughly $8,500 more than the typical household actually makes, according to an analysis from Visual Capitalism.

The study found that San Jose leads the nation in unaffordable homes, with the median home priced at $1,875,000, requiring a salary of at least $330,758 to afford the expected monthly payments of $7,718.

The top four markets for median home prices were all in California, with San Francisco, San Diego and Los Angeles following San Jose. New York City ranked seventh on the list for home prices, coming in slightly below Boston.

Meanwhile, the median household income across the country stood at just $67,500, which would be enough to afford the typical home in only 15 of the cities on the list. 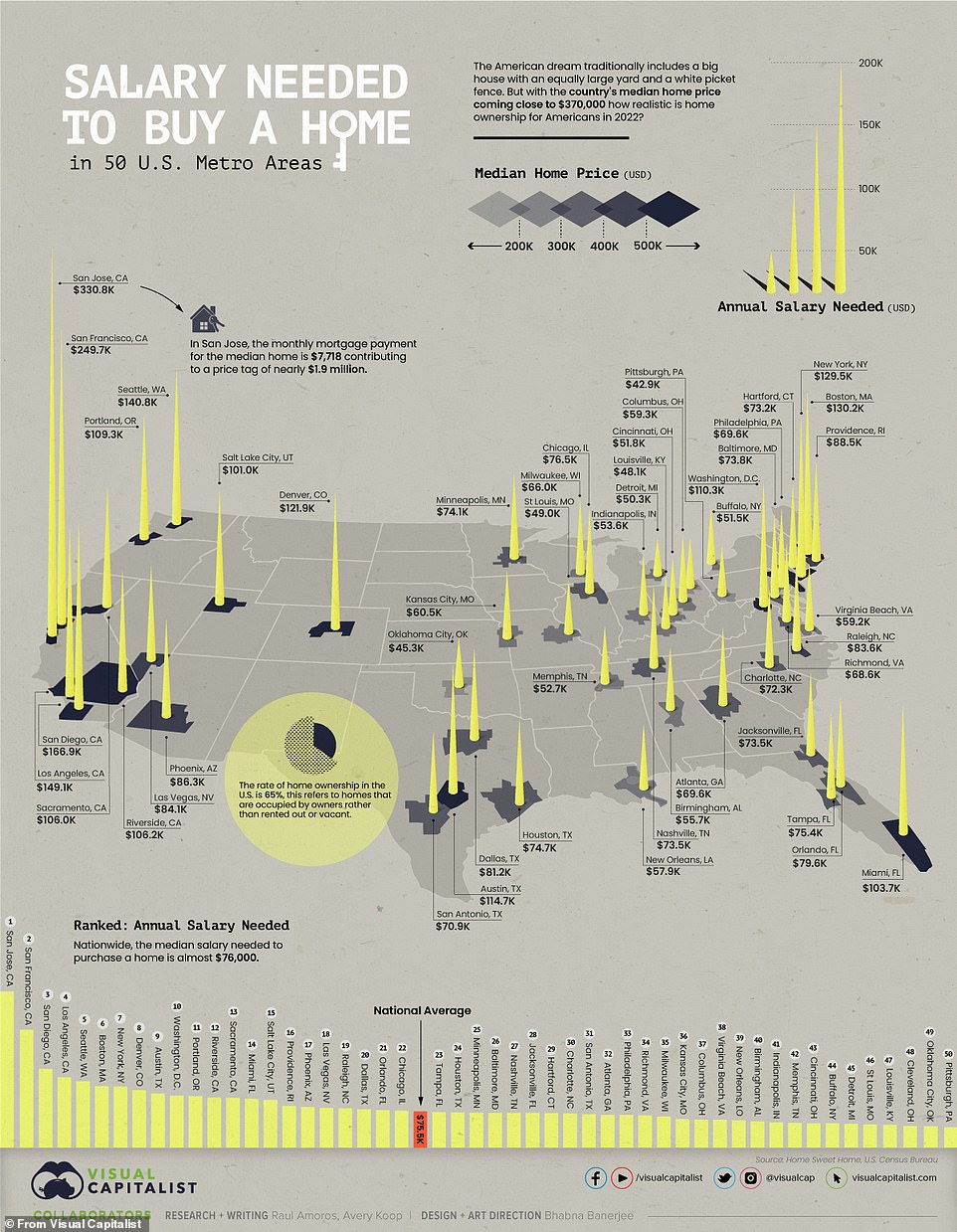 A new study shows the median salary required to afford typical home payments in 50 major US cities. Median home payments are now unaffordable for the typical American family in all but 15 of the cities

Most of the more affordable cities were located in the Midwest. Pittsburgh ranked the most affordable, with a median home price of just $185,700, requiring a salary of just $42,858 to afford monthly payments.

In addition to Pittsburgh, a family making $50,000 a year or less could afford the median home payment in St. Louis, Louisville, Cleveland, and Oklahoma City, the study found.

Typical income does vary across the country, and the cities with the most expensive homes usually have some of the highest average salaries.

Still, median home payments outpaced median local salaries in many of the cities on the list — a symptom of the broader unaffordability issue that has seen prices outpace wages for some time.

Consumer prices have soared 9.1 percent over the past year, the biggest yearly increase since 1981. Housing costs, which make up a third of the consumer price index, were up 5.6 percent in June from a year ago — though that data is only collected twice a year, and likely lags behind real costs.

The new home affordability study assumes a down payment of 20 percent, and assumes that no more than 28 percent of a family’s income would go toward monthly home payments.

The report was based on data from Home Sweet Home for the first quarter of 2021, which set the median US home price at $368,200 and the average fixed mortgage rate at 4 percent.

Home prices and mortgage rates have actually increased since then, meaning that the study might even be underestimating the salary needed to afford a home in many markets. 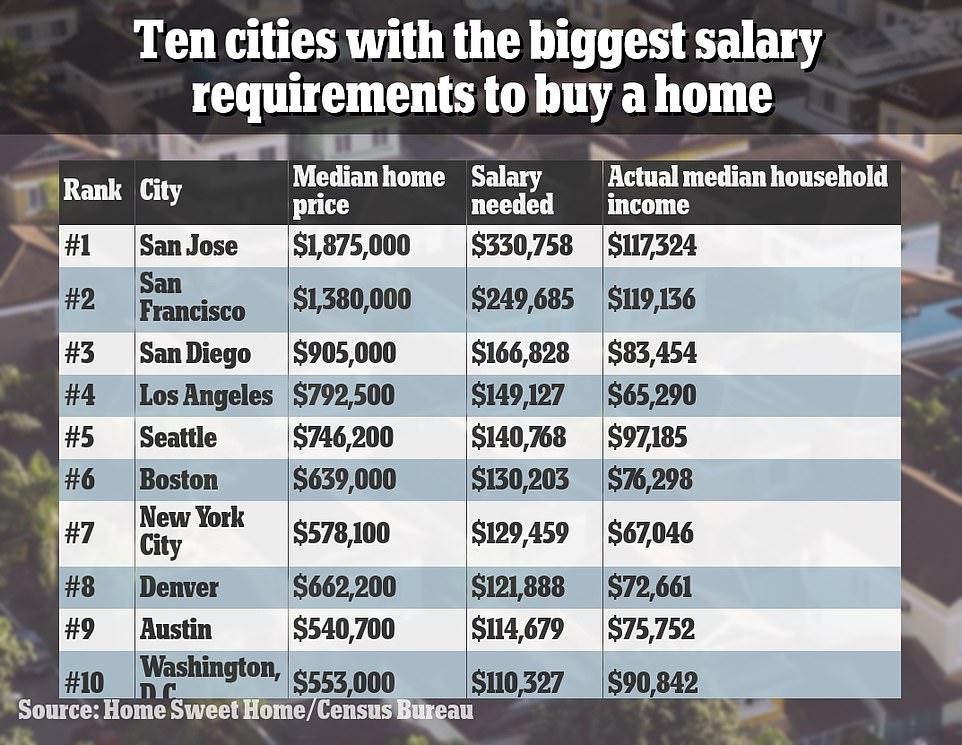 The study found that San Jose leads the nation in unaffordable homes, with the median home priced at $1,875,000, requiring a salary of at least $330,758 to afford the expected monthly payments of $7,718 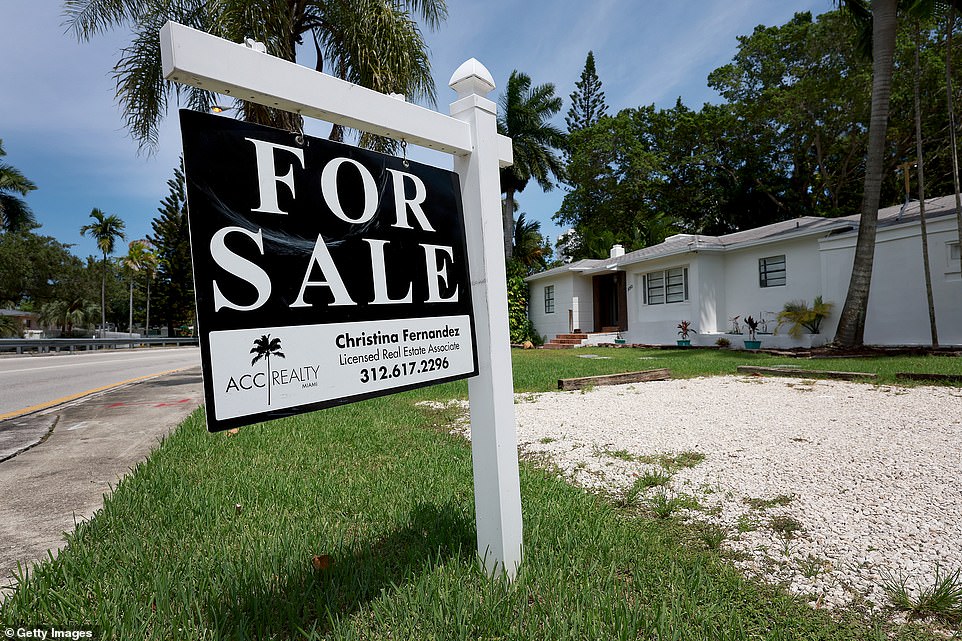 Though the housing market has cooled off in recent months, prices continue to rise, albeit at a slower pace than last year

The national median home price jumped 13.4 percent in June from a year earlier to $416,000. That’s an all-time high in data going back to 1999, according to the National Association of Realtors.

That’s still nearly double the rates seen as recently as January, as the cost of mortgages has been rising with higher benchmark rates from the Federal Reserve.

The Fed last week ratcheted up its main borrowing rate by three-quarters of a point, the second such increase in less than two months, and bringing the policy rate to 2.5 percent, up from near zero at the beginning of the year.

But even as interest rates rise, home prices have yet to fall back to earth after rising faster than wages for some time.

Though the red-hot housing market has cooled off somewhat, the most recent data showed that they have continued to rise, with demand outpacing tight supply.

A report from S&P CoreLogic Case-Shiller showed that national home prices increased 19.7 percent in May from a year ago, after surging 20.6 percent in April. 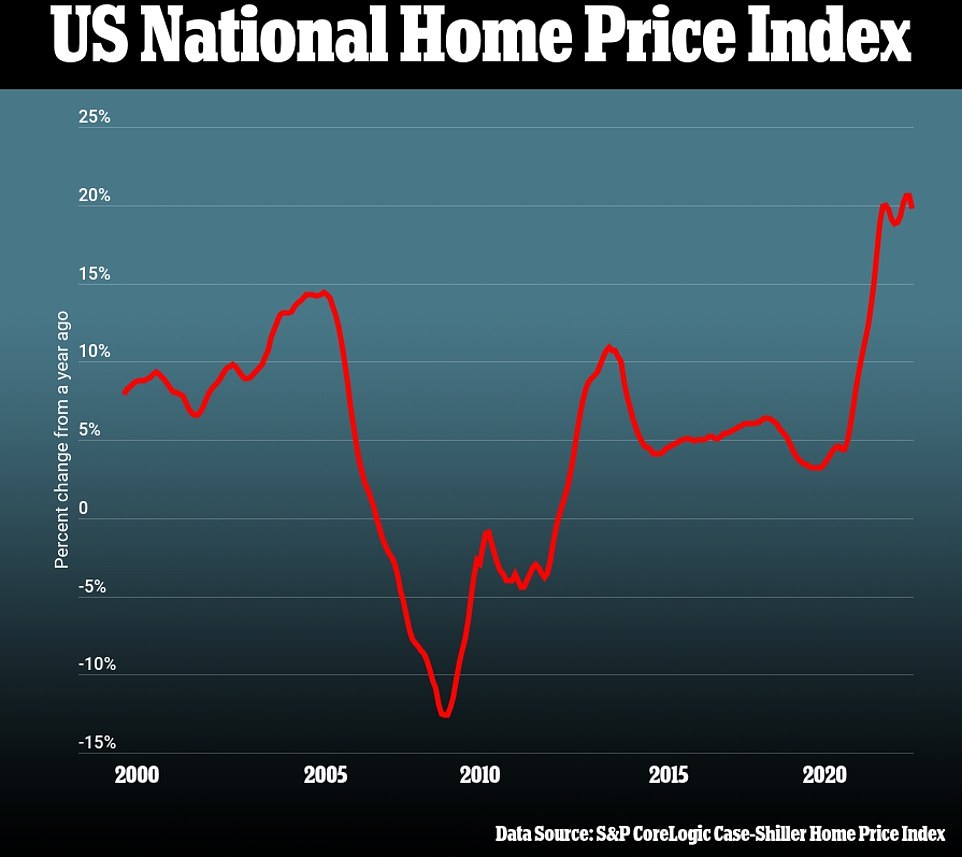 National home prices increased 19.7 percent in May from a year ago, after surging 20.6 percent in April 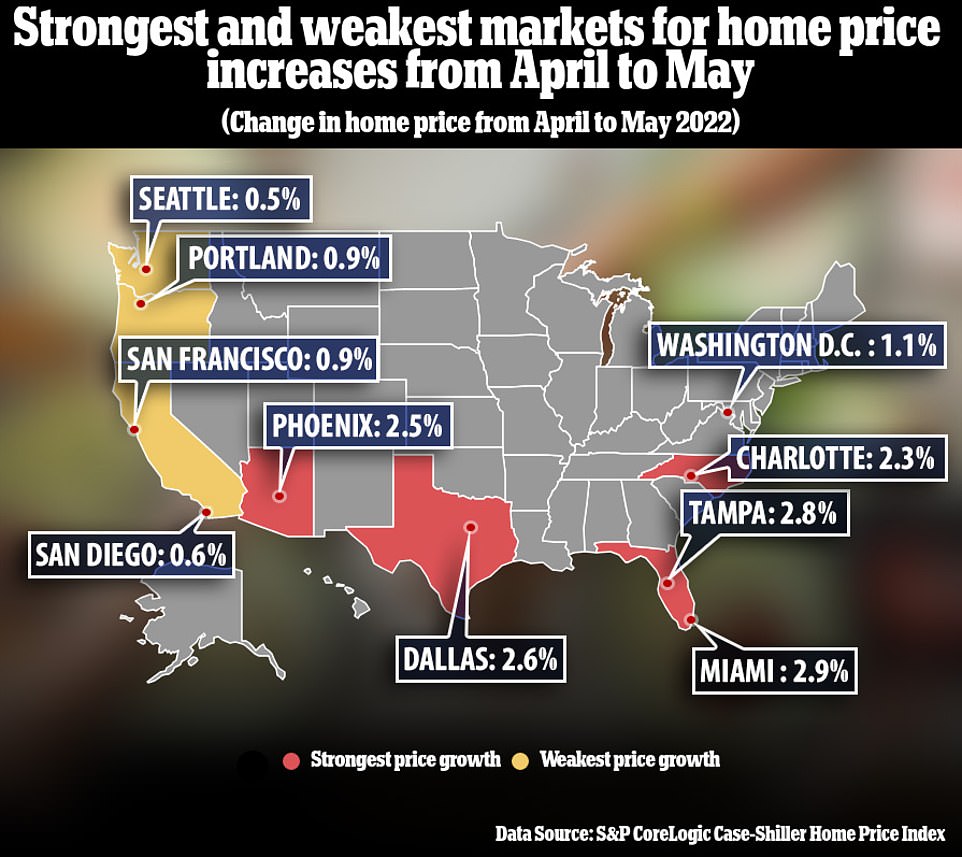 A report from S&P CoreLogic Case-Shiller showed that home prices continue to rise in 20 major US cities, but that the increases are starting to decelerate on the West Coast, where prices are already highest

Home prices remained up double-digits from a year ago in every city covered by the index, even as the increases began to decelerate in many markets.

On an annual basis, Minneapolis had the smallest increase in home prices from a year ago at 11.5 percent, followed by Washington DC at 12.2 percent and Chicago at 12.9 percent.

‘However, at the city level we also see evidence of deceleration. Price gains for May exceeded those for April in only four cities,’ he added. ‘As recently as February of this year, all 20 cities were accelerating.’ 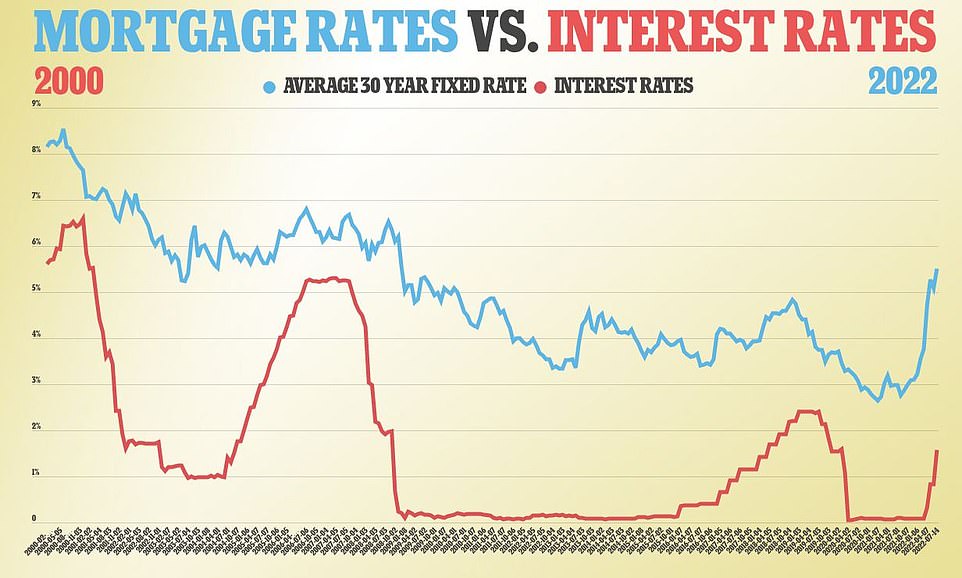 The contract rate on a 30-year fixed-rate mortgage was averaging 5.54% in late July as the Fed’s key policy rate rises

In another sign of a slowdown in the housing market, the NAR said last month that pending home sales dropped 20 percent in June from a year ago.

‘Contract signings to buy a home will keep tumbling down as long as mortgage rates keep climbing, as has happened this year to date,’ said NAR Chief Economist Lawrence Yun.

‘Home sales will be down by 13 percent in 2022, according to our latest projection,’ Yun added, forecasting that mortgage rates will stabilize near 6 percent and that home sales will begin to rise again in early 2023.

Layoffs in the housing and lending sectors have already begun. Among those reporting job cuts in recent months are the online mortgage company loanDepot, online real estate broker Redfin, and Compass.

The nation´s largest bank by assets, JPMorgan Chase, laid off hundreds from its mortgage unit and reassigned hundreds of others.