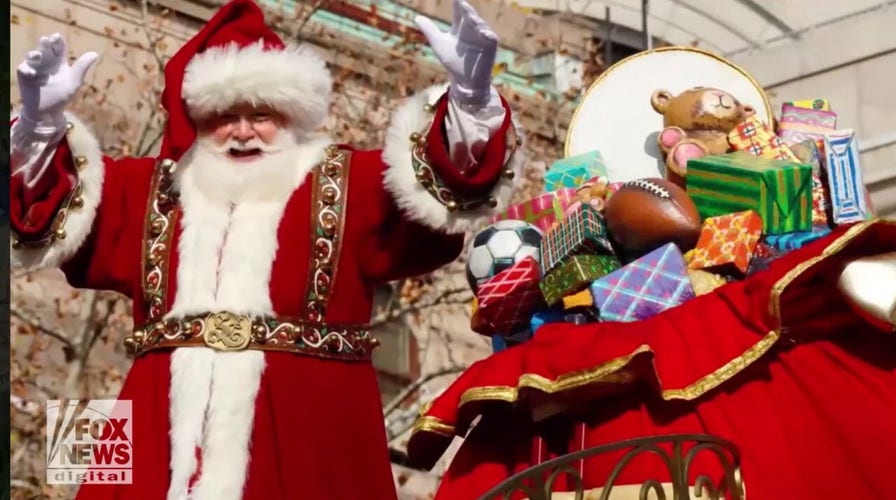 Scottish-born James Edgar arrived in Massachusetts in 1878 and began dressing as Santa in 1890 in his own department store.

James Edgar channeled entrepreneurial spirit and a gift for making people smile into changing the way the world celebrates Christmas.

An immigrant from Scotland, he opened the James Edger & Co. department store in downtown Brockton, Massachusetts in the late 1800s.

He had a knack for clever promotion, a love of children and a patriotic zeal for hs adopted homeland, said Johnny Merian, a longtime Brockton businessman, who lights up like a child seeing Santa for the first time when he discusses the local legend.

MEET THE AMERICAN WHO WAS THE FIRST PAID PROFESSIONAL FOOTBALL PLAYER: PUDGE HEFFELFINGER

Merian has long championed the cause of James Edgar. He’s working on a book about the first department-store Santa, discussed him at length in the 2011 documentary “Becoming Santa” and has found ways to honor him around the city.

Edgar “was a real-life Santa Claus. He loved his community. He wanted to make people happy,” said Merian. 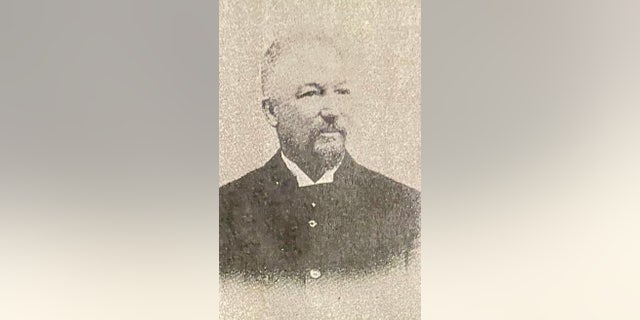 James Edgar was born in Scotland in 1843 and became a prosperous Massachusetts businessman. At his own store, he often greeted customers while dressed as various child-friendly characters, including a sea captain and even George Washington.
(Courtesy Johnny Merian)

“He lived the universal spirit of Christmas. That spirit still lives here in Brockton today.”

The 19th-century entrepreneur often greeted customers while dressed up as various child-friendly characters: a sea captain, a clown, even George Washington.

He donned a Santa Claus suit at his department store for the first time in 1890.

“Children from as far as Boston and Providence came by train to see Edgar as Santa.”

“He got the idea to dress up as Santa Claus based on an 1863 illustration of Santa by artist Thomas Nast,” writes the International Santa Claus Hall of Fame, which made Edgar one of its charter members in 2010.

THE HISTORY OF SANTA CLAUS, HIS RED SUIT AND STAND-OUT POP CULTURE MOMENTS

Nast’s version of Santa Claus appeared in national magazines such as Harper’s Weekly during and after the Civil War. 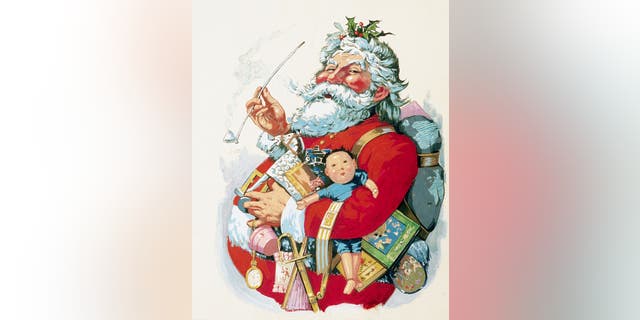 The same image appeared in the front door of Edgar’s department store, with the owner wearing a custom-made red Santa suit.

It proved to be an instant sensation.

“Within days,” adds the Hall of Fame, “children from as far as Boston and Providence, Rhode Island came by train to see Edgar as Santa.”

“Seeing Santa for the first time was a memory I have treasured all my life.” — Brockton resident Mr. Pearson

An old-timer identified only as Mr. Pearson described the experience to local historian Bob Kane many years later.

“I can still remember seeing Santa fo the first time,” said Person. “Nowadays Santa Claus is everywhere. Back in the 1890s, we saw drawings of him in the newspaper and magazines. But we never thought we’d see him in person.”

‘THE ELF ON THE SHELF’: IS AN ELF MAKING AN APPEARANCE IN YOUR HOUSE THIS HOLIDAY SEASON?

It was a memory, the man said, “I have treasured all my life.”

“Jim Edgar deserves a pedestal all his own up there alongside Paul Bunyan, Johnny Appleseed and John Henry,” Yankee Magazine wrote in 1969, in one of the few major pieces written about the Brockton businessman. A Christmas tree ornament recognizing James Edgar, a businessman in Brockton, Massachusetts, as the first Santa in a department store in 1890.
(Courtesy Johnny Merian)

“His wonderful life of Americana is the caliber that inspires legends. Yet for some reason Edgar … has never received the credit he deserves.”

James Edgar was born on a farm in Duns, Berwickshire, Scotland on March 5, 1843, to John and Margaret (Lithgow) Edgar.

He “pawned his watch to pay his fare to America, arriving in Boston in 1865 with a total capital of one $2.50 gold piece and 25 cents,” wrote Kane, the Brockton historian, in a short 1992 Edgar biography.

“Jim Edgar deserves a pedestal all his own up there alongside Paul Bunyan, Johnny Appleseed and John Henry.” — Yankee Magazine

“After 10 years [of] working for the firm of Callendar, MacAusland & Troupe … James Edgar came to the conclusion that he could make more money working for James Edgar.”

He opened his first department store with a partner in Brockton in 1878. 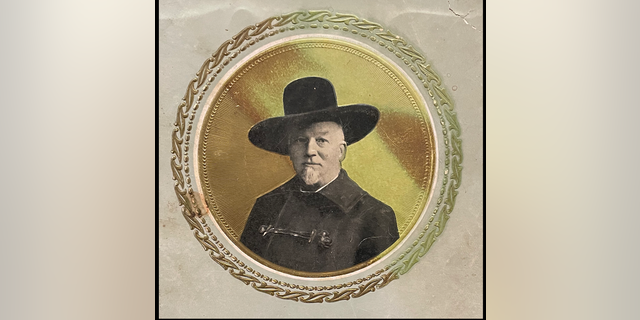 The city of 100,000 people south of Boston is best known today as the home of the only undefeated heavyweight boxing champ, Rocky Marciano; and of the 1980s middleweight champ Marvelous Marvin Hagler.

In Edgar’s era, Brockton was in its glory as an industrial little powerhouse. Among other claims to fame, the city was the nation’s biggest shoe manufacturer in the 1800s.

SHOPPING FOR MADE-IN-AMERICA PRODUCTS FOR CHRISTMAS? HERE ARE 3 COMPANIES TO CHECK OUT

“We pretty much shoed the whole Union army in the Civil War,” said John McGarry, who has portrayed Santa Claus in the city’s Christmas parade for many years.

Thomas Edison used energetic Brockton as the vehicle to demonstrate the power of his latest inventions. 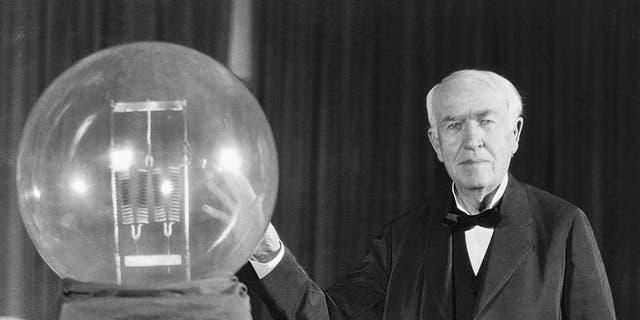 Thomas A. Edison exhibits a replica of his first successful incandescent lamp. The famous American inventor pioneered many of his advancements in Brockton, Massachusetts.
(Getty Images)

But like many small industrial cities across the country, Brockton has fallen on harder times in recent decades as American manufacturing fled overseas.

ON THIS DAY IN HISTORY, AUGUST 12, 1877, THOMAS EDISON INVENTS THE PHONOGRAPH

“We’re wealthy in people if not on the financial ledger,” Mayor Bob Sullivan told Fox News Digital, citing Edgar as one of many Brocktonians who has made a lasting impact on the nation.

Edgar reminds local residents of the city’s grand past — and what it can become again in the future, said Merian, the downtown businessman.

While James Edgar is recognized by the International Santa Hall of Fame as the first department-store Santa, he’s certainly not the most famous.

That honor goes to Macy’s, with its flagship location in New York City.

The beloved 1947 Hollywood classic “Miracle on 34th Street,” and decades of relentless, hugely successful marketing by the retail landmark has forged an ironclad affiliation between Macy’s and Santa. 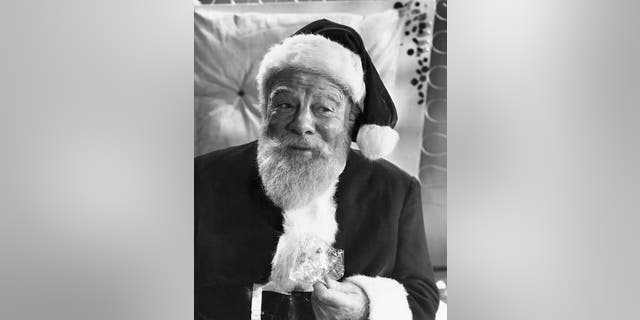 Kris Kringle (Edmund Gwenn) gives out candy to the kids at Macy’s, where he plays Santa Claus in "Miracle On 34th Street," a 20th Century Fox production. Gwenn, like entrepreneur James Edgar, is a charter member of the International Santa Hall of Fame.
(Getty Images)

Edmund Gwenn, the actor who played the mysterious midtown miracle worker in the movie, is — like Edgar — a charter member of the International Santa Claus Hall of Fame.

But a Macy’s historian, Bob Rutan, told the Boston Globe in 2008 that “Brockton is [the] home of the first retail Santa.”

R.H. Macy, the department store titan, was a Massachusetts native who opened his first namesake outlet in the Bay State mill town of Haverhill in 1851. 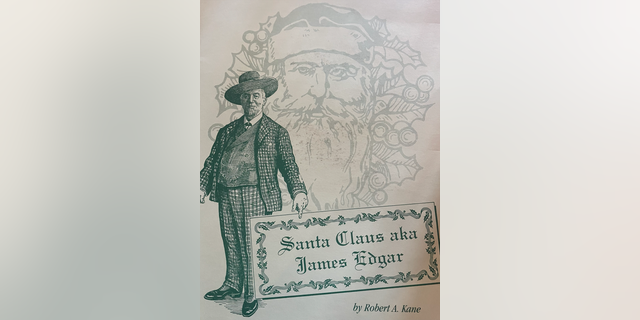 He moved Macy’s to Manhattan in 1858. Macy died in 1877, the year before Edgar opened his Brockton department store.

But Merian suspects that the company, with its Massachusetts connections, quickly learned of the idea and brought the department-store Santa to Manhattan.

“Santa first became part of Macy’s holiday season when the store advertised that Santa came to stock their counters with his finest gifts” in 1861, claims the Macy’s website. A spokesman confirmed the 1861 date over the phone.

Santa appeared in Macy’s for the first time the following year, the company claims. 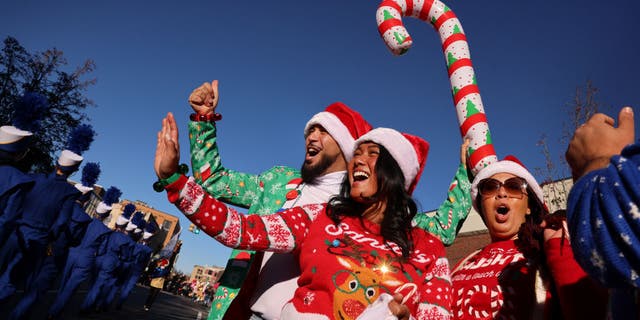 In Brockton, Massachusetts, on November 26, the annual Christmas parade. The parade was back to a pre-pandemic size and this year’s theme was Back Together for the Holidays.
(Craig F. Walker/The Boston Globe via Getty Images)

Regardless of any dispute, the real Santa Claus loves his global army of department-store doppelgängers as much as the children who flock to see them, claims McGarry, Brockton’s parade-day Santa.

“Kids can now put in their request right in their hometown, instead of hoping to get a message to the North Pole,” said McGarry.

“It has streamlined the whole process and made life much easier for Santa Claus.”

Department-store Santas have since been joined by a legion of mall Santas, airport Santas, street corner Santas — even a few bad Santas.

TOP CHRISTMAS MOVES IN EVERY STATE IN AMERICA 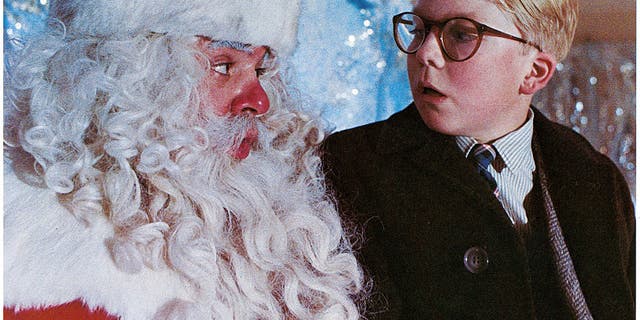 Peter Billingsley sits on Santa’s lap in a scene from the film "A Christmas Story," 1983.
(Metro-Goldwyn-Mayer/Getty Images)

“You’ll shoot your eye out, kid,” Bad Santa barked, while pushing Ralphie away with the bottom of his dirty boot.

James Edgar, the immigrant from Scotland who reshaped Christmas in America, died on Sept. 20, 1909, at his summer home in nearby Lakeville, Massachusetts. 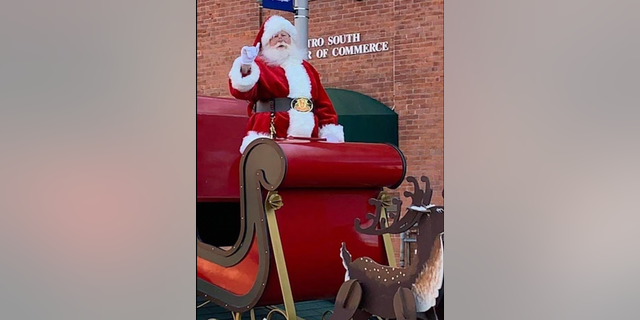 John McGarry has played Santa in the annual Brockton Christmas parade for many decades. He said the city has a unique claim to Santa’s legacy thanks to James Edgar.
(Courtesy John McGarry)

Edgar had suffered a stroke five years earlier, which limited his mobility. But he was able to enjoy the opening of a new retail outlet in 1907. It was the first concrete department store in America — an innovation meant to save lives by reducing the chances of fire.

Edgar is buried beneath a giant mausoleum in Brockton’s Melrose Cemetery.

His spirit lives on in malls and department stores around the country and around the world — and in the Christmas dreams of young boys and girls all year long. 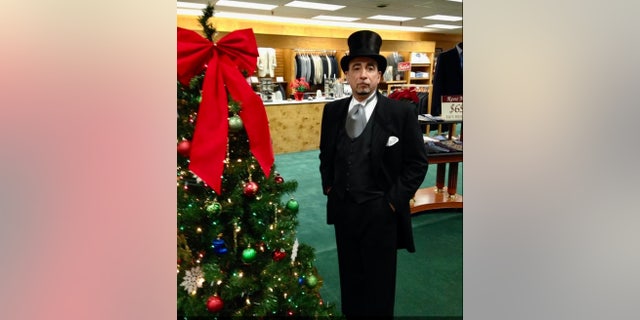 Aplaque downtown marks the site today of Edgar’s outlet, where he introduced the store Santa. The plaque incudes the names of annual winners of the James Edgar Community Service Award.

The city hosts an annual reading of “The Story of James Edgar” — much like other communities do “A Visit from Saint Nicholas” — and celebrates his legacy in its Christmas parade held in Edgar’s honor each year.

Brockton held the Guinness World Record for the most people wearing a Santa hat in one place (800) as recently as 2010. It was surpassed following a promotion a Major League Baseball game in 2014.

Some local children grow up believing that Santa Claus was born in Brockton and that he visits their community before any others. 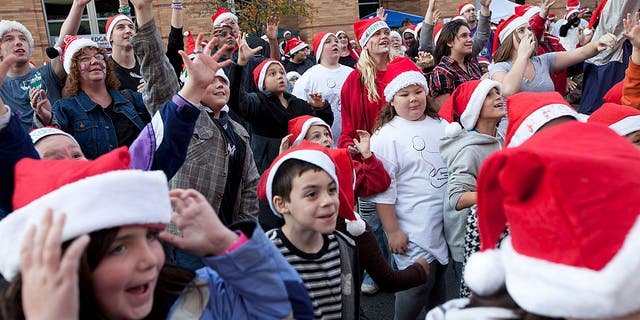 People in the crowd reach out to try to grab the free T-shirts that are thrown during the event. The city of Brockton competes for the largest number of people wearing Santa hats in one place in downtown Brockton, Massachusettes, on Sunday, Nov. 20, 2011.
(Yoon S. Byun/The Boston Globe via Getty Images)

It’s a belief that has not been disproven by any scientific evidence, notes Brockton Santa John McGarry,

“I think I have finally figured out the real purpose and message of James Edgar,” Johnny Merian, the downtown Brockton businessman who has championed Edgar for nearly four decades, shared in a text to Fox News Digital late Thursday.

“I think the message of his Christmas story is one of hope for all children — and here in Brockton it’s a message of rebuilding this community once again.”

To read more stories in this unique “Meet the American Who…” series from Fox News Digital, click here.