Naomi Biden, 28, married her fiancé Peter Neal on Saturday, Nov. 19, at a private 11 a.m. ceremony outside the White House, on the South Lawn.

Naomi Biden is President Joe Biden’s eldest grandchild. She is the daughter of Hunter Biden and his ex-wife Kathleen Buhle.

This is believed to be the first White House wedding to take place on the South Lawn.

AS JOE BIDEN’S GRANDDAUGHTER IS MARRIED TODAY, HERE’S A LOOK BACK AT OTHER WHITE HOUSE WEDDINGS

Naomi Biden and Peter Neal exchanged “I do’s” during a chilly late-morning ceremony — temperatures were in the low 40s — in front of guests seated in white folding chairs, the Associated Press noted.

The South Portico of the White House, facing the lawn and the Washington Monument in the distance, was decorated with wreaths and garland bearing white flowers. There was no tent. 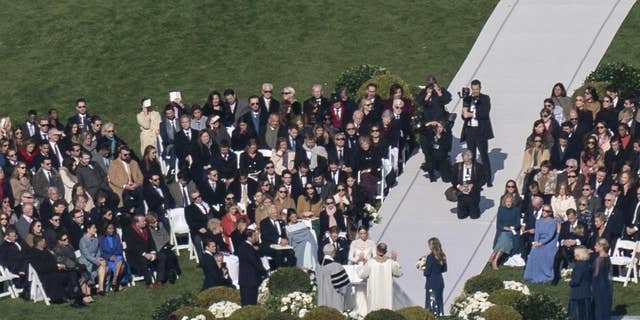 Naomi Biden and Peter Neal decided to keep journalists out, although the ceremony was outdoors on the grounds of what the president and first lady call the “people’s house.”

“The wedding of Naomi Biden and Peter is a private one,” Karine Jean-Pierre, the president’s chief spokesperson, said on Friday.

“It’s a family event and Naomi and Peter have asked that their wedding be closed to the media and we are respecting their wishes.” 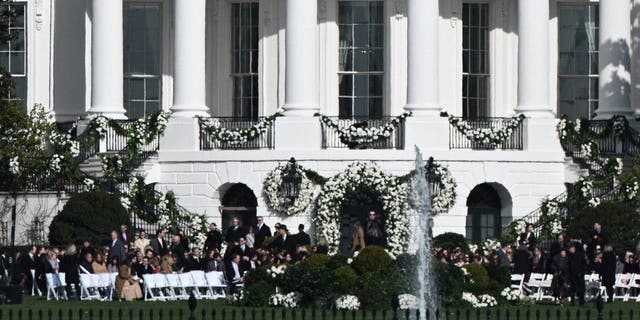 Guests arrive at the South Lawn of the White House in Washington, D.C., for the wedding of Naomi Biden, 28, granddaughter of President Joe Biden, and Peter Neal, 25, on Nov. 19, 2022.
(Photo by BRENDAN SMIALOWSKI/AFP via Getty Images)

Three weddings have occurred in the Rose Garden and the other 15 documented weddings at the White House took place indoors, according to the Library of Congress.

“The wedding of Naomi Biden and Peter is a private one.”

The wedding was paid for by the Biden family, said Elizabeth Alexander, communications director for Dr. Jill Biden, in an email reported by The New York Times.

WEDDING WINNERS 2022: THE BEST 10 STATES FOR WEDDINGS THIS YEAR (DID YOUR STATE MAKE THE LIST?)

“Consistent with other private events hosted by the first family and following the traditions of previous White House wedding festivities in prior administrations, the Biden family will be paying for the wedding activities that occur at the White House,” she said. 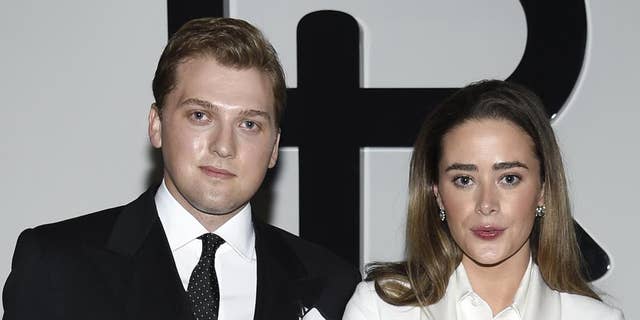 Naomi Biden, right, and fiancé Peter Neal are shown during the Ralph Lauren Fall/Winter 2022 fashion show at the Museum of Modern Art on March 22, 2022, in New York.
(Evan Agostini/Invision/AP, File)

Naomi Biden shared the news of her engagement earlier this year on her Twitter account. She also shared other updates along the way.

In April, Naomi Biden thanked her “Nana and Pop” in a tweet announcing that her wedding would be held at the White House.

“Peter and I are endlessly grateful to my Nana and Pop for the opportunity to celebrate our wedding at the White House. We can’t wait to make our commitment to one another official and for what lies ahead,” she wrote.

The pair, who both work as lawyers in Washington, live on the third floor of the White House, reported The New York Times.

Ahead of their wedding ceremony, Neal shared a sweet photo of the two holding hands under an arch at the Washington, D.C., Marriage Bureau on his Instagram account on Nov. 17, 2022.

“Gotta nail the money shot to secure the license to wed,” wrote Neal in the post.

Neal, 25, of Jackson Hole, Wyoming, recently graduated from the University of Pennsylvania law school. He works at Georgetown University Law Center in Washington. His parents are Drs. Mary C. and William “Bill” C. Neal of Jackson Hole, the AP reported.

Naomi Biden is named after her late aunt, who died in a car accident at age one. That same accident also killed President Biden’s first wife, Neilia, the White House website notes.

The Associated Press contributed reporting to this article.