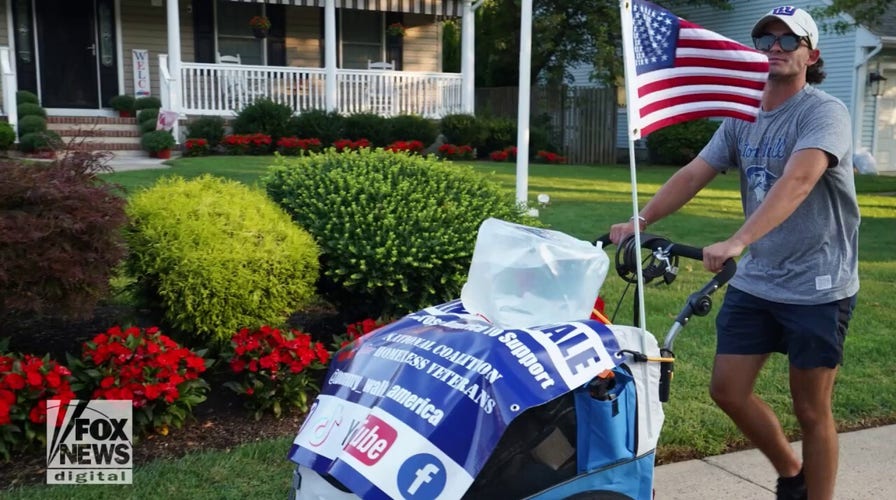 Tommy Pasquale of Randolph, N.J., shared with Fox News Digital that he’s on a mission to support America’s veterans by walking to Venice Beach, California.

A New Jersey man is walking across the country for a very good cause.

Tommy Pasquale of Randolph, New Jersey, is on a mission to trek all the way to Venice Beach, California, from New Jersey to raise money for the National Coalition for Homeless Veterans.

“I think it’s not too much to ask that when they get home, they have a good place to live and rest their hat at the end of the day,” he said.

Pasquale revealed to Fox News Digital that his mission is a journey “from sea to shining sea” in true American fashion. 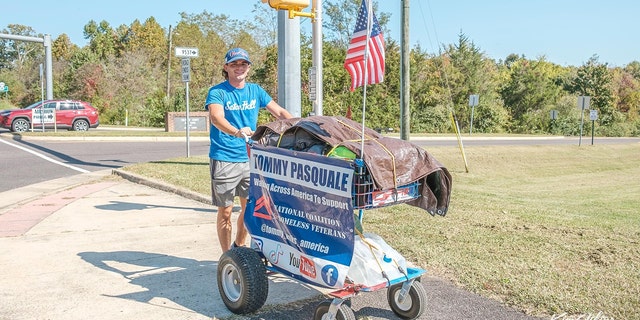 Tommy Pasquale is on a mission to walk from Manasquan, New Jersey, to Venice Beach, California, to raise money for America’s homeless veterans.
(Tommy Pasquale)

Ever since the COVID-19 pandemic, when the world was forced into lockdown, Pasquale said that it’s been a dream of his to “do something crazy” such as walk across the country.

“I decided if there’s ever a point where I’m going to do it, the time is now when I’m young, I’m strong and I’m healthy,” he said.

“So, I went for it and I’m glad I did, although it’s definitely a little crazy.”

Pasquale quit his job — he worked in software sales in New York City. He also sold his car, using the money he’d saved to take the trip. 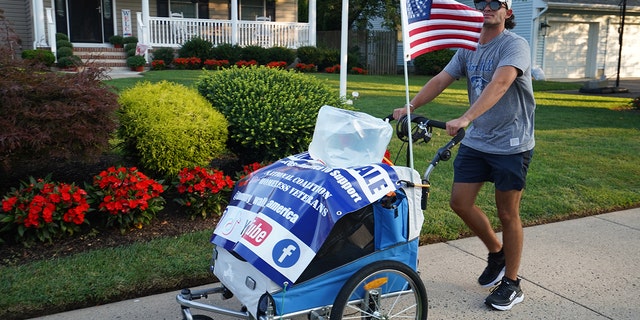 “It should last me until I get there,” he said. “But currently, I have no income.”

Pasquale decided to pair the cross-country walk with the “good cause” of fighting veteran homelessness. He has several veterans and active-duty military in his own circle.

“I’ve always been passionate about helping out veterans in any way I can because they’ve given so much to us,” he said.

Pasquale is calling the journey “Tommy Walks America” — and he’s been keeping his followers in the loop through social media.

Before the trip, Pasquale trained by walking every day. Although he was fit enough for the job, he realized the journey would be physically and mentally tough.

“I was definitely nervous. I was excited, cautiously optimistic — but until you go out there and take the first step and start doing it, it’s all unknown.”

He added, “Sometimes you just got to send it.” 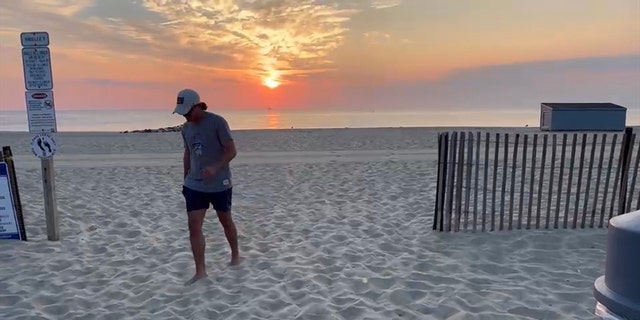 Tommy Pasquale takes a final walk on one of his "favorite beaches" in New Jersey before leaving for his cross-country trek on Sept. 19, 2022.
(Tommy Pasquale)

Pasquale said he walks at least 20 miles each day, following county highways and small back roads, while pushing a shopping cart full of essentials such as clothes, non-perishable food, toiletries, water, a journal, books and chargers.

The traveler spends most nights in a tent with a sleeping bag that he’s brought along with him.

But he’s been able to bunk with friends, too — and even people he’s met along the way — who live en route.

Since traveling about 925 miles to Nashville, Pasquale revealed that his trusty pairs of New Balance and HOKA sneakers are just about spent. 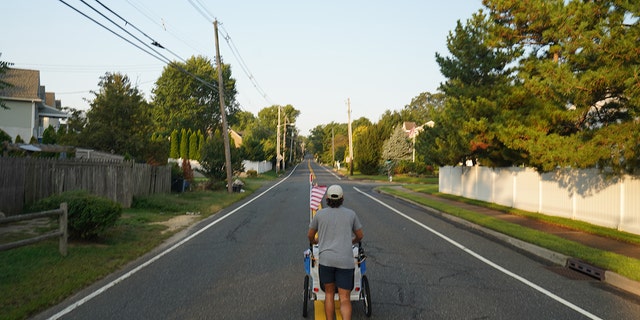 “They have served their purpose,” he said. “Definitely need some new sneakers now.”

Pasquale has received “a lot of support” so far from people he knows, as well as from strangers, he said — including country music star Parker McCollum, who offered Pasquale tickets to the Country Music Awards while he was in Music City on Nov. 9.

“Any time I get to stop and see something cool or stop in a cool city like Nashville, I definitely want to take my time and enjoy it,” he said.

While Pasquale is a third of the way through his journey as of right now, he revealed that he’s learned a lot about himself and the world around him, especially in a nation that seems so divided. 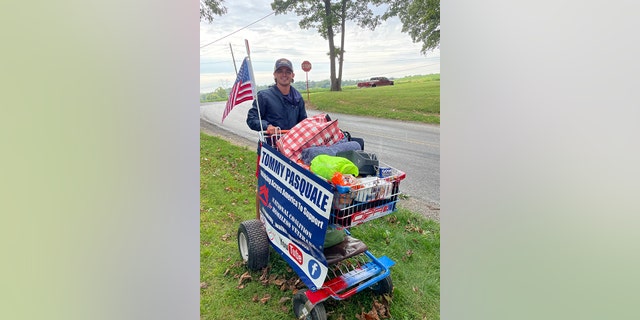 Twenty-four-year-old Tommy Pasquale poses with his new cart — after the first cart broke — filled with essentials for his walk across the U.S. on day six of the trip in Pennsylvania.
(Tommy Pasquale)

“There are so many good people that are out there still — like, genuine, good people,” he said.

“At the end of the day, most Americans just want to help out their fellow Americans any way they can, and I think it’s a pretty special thing.”

SECRETS OF GETTING INTO THE HOLIDAY SPIRIT THIS YEAR: GIVE BACK TO OTHERS

He also said, “Different parts of this country are so different, but people are genuine wherever you go.” 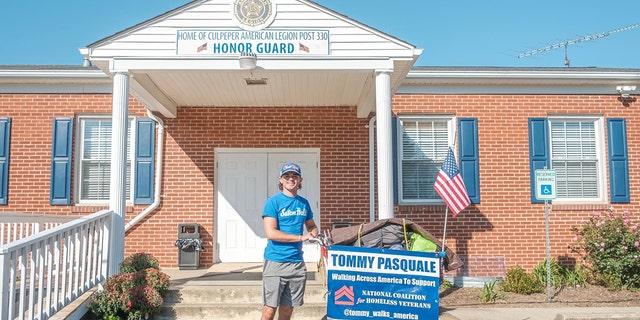 Tommy Pasquale stops at American Legion Post 330 in Culpeper, Virginia, as he walks across America on behalf of America’s homeless veterans.
(Tommy Pasquale)

Pasquale’s goal is to raise $100,000 for the National Coalition for Homeless Veterans, but he believes he’ll be able to raise much more.

“I don’t think it’s out of the question to think that we could raise $1 million,” he said.

He added, “Any time you get the chance to meet a veteran, make sure you shake their hand and give them a hardy ‘thank you’ for what they do for this country.”

Pasquale said that 100% of all donations he receives will go to the National Coalition for Homeless Veterans.

Pasquale added that he plans to fly back home to New Jersey once he makes it to his final destination in California.

“When I get home, I might park it on the couch and not take any steps for about a month,” he said, laughing.

Donations can be made at GoFundMe and the Tommy Walks America info page at linktr.ee/tommy_pasquale.