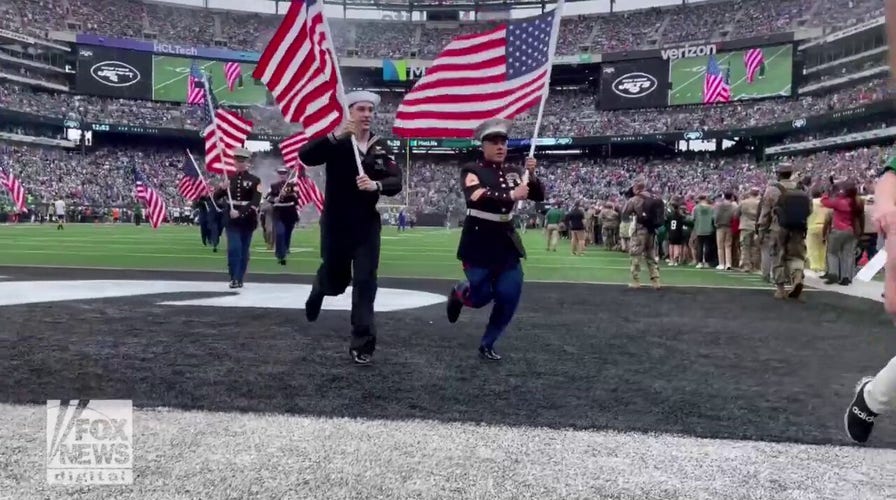 When Ernest Albert “Andy” Andrews Jr. died in 2016, hundreds packed into an auditorium in the tiny mountain town of Montreat, North Carolina, to pay their respects to the 92-year-old World War II veteran.

“He was an old man living in this little community in the mountains, and about 700 people showed up to his memorial service,” Andy’s son, Al Andrews, recounted to Fox News Digital. “It was crazy, wild.”

When he was 20 years old, Andy Andrews was among the third wave of troops to land on Omaha Beach in Normandy, France, on D-Day, June 6, 1944. He would go on to fight in other key battles of the conflict, such as the Battle of Aachen, the Battle of Hürtgen Forest and the Battle of the Bulge.

Andrews’ war memoir, published last summer and titled, “A Machine Gunner’s War: From Normandy to Victory with the 1st Infantry Division in World War II,” recounts in graphic detail his experience as a U.S. Army machine gunner — a position with a life expectancy in combat of approximately seven minutes. 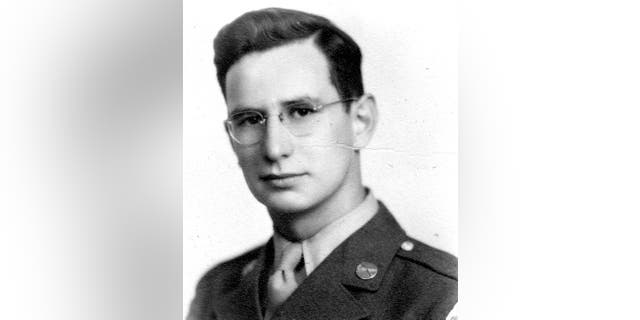 Andy Andrews was among the third wave of troops to land on Omaha Beach in Normandy, France, on D-Day, June 6, 1944.
(Casemate Publishers)

Author and historian David B. Hurt worked for 15 years assisting Andrews with assembling his extensive memories of the war into a book.

“For Andy, this experience as a soldier was defined by his Christian faith,” Hurt told Fox News Digital. “In that sense, you might say that the book’s central theme is about Andy’s commitment to preserve his faith and humanity amid the war’s horror and brutalization.”

Born July 27, 1923, in Chattanooga, Tennessee, Andrews grew up in nearby Signal Mountain, the fourth of six children. The first part of Andrews’ book details his devout Christian upbringing, which he credited with sustaining him through the war. He earned four Purple Hearts and four Bronze Stars, and suffered several close calls, including once when his glasses were shot off his face. 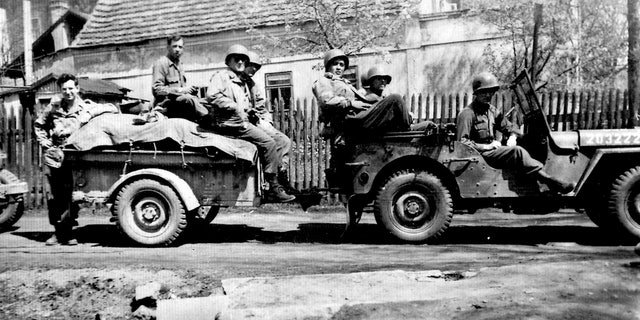 Andy Andrews, far left, and his squad with their Jeep in Europe.
(Casemate Publishers)

Hurt pinpointed several portions of the book where Andrews’ faith and humanity shined through amid the deep darkness of World War II.

100-YEAR-OLD WWII VET BREAKS DOWN, SAYS THIS ISN’T THE ‘COUNTRY WE FOUGHT FOR’: ‘I AM SO UPSET’

In one instance, Andrews was ordered to lob a grenade into machine gun nest that was spewing fire at them.

When he got closer to the dugout, Andrews heard children sobbing and discovered that three German boys no older than 7 were pulling a rope to keep the machine gun going. The Nazis had apparently ordered the children to maintain that position as they retreated. He embraced the terrified boys, offered them chewing gum and ensured that the Americans took care of them. 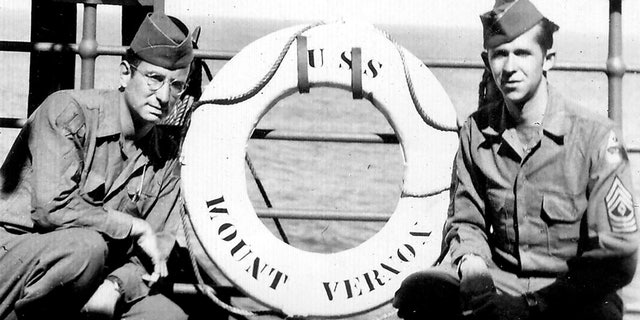 Andy Andrews, left, with a friend aboard the USS Mount Vernon in October 1945.
(Casemate Publishers)

In another incident, Andrews disobeyed a direct order from a lieutenant when he was ordered to gun down 10 Germans who waved a white flag of surrender. “You can go to hell,” Andrews told him. “You can get someone else to do your dirty work for you. Damned if I will do it!”

The lieutenant, who Andrews speculated was unusually angry after having been wounded with shrapnel, later calmed down.

Andrews’ most harrowing and poignant battle took place on Nov. 18 and 19, 1944, when his unit was tasked with maintaining a piece of high ground dubbed Hill 232 outside Hamich, Germany.

When the enemy attacked, they decimated all but five of 35 Americans. Andrews had to shoot the Germans point-blank in the head with his pistol as they crested the bluff. 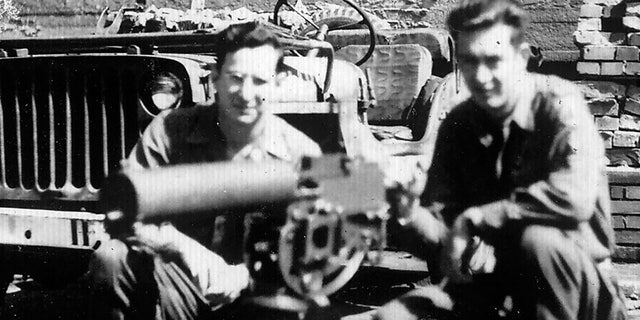 Andy Andrews, left, and a fellow soldier with a machine gun and Jeep.
(Casemate Publishers)

Andrews’ closest friend was shot through the head and killed during that battle, helplessly gasping for breath in his lap as blood spilled from his mouth, nose, ears and eyes.

After the four gunners before him had been shot in the face, Andrews was ordered to take over the machine gun. He shot at a German soldier who had wounded him in the shoulder after tossing a grenade at him.

Silence lingered for 30 minutes, during which time Andrews thought the soldier was dead until a white handkerchief emerged in the early-morning darkness. 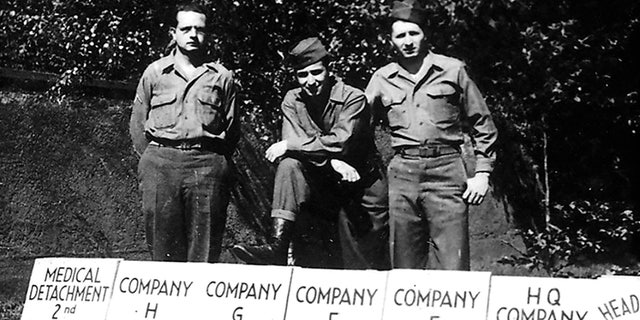 “May I surrender? Please, may I surrender?” the badly bloodied soldier cried out to Andrews in broken English as he crawled over to him.

Andrews recounted how he picked him up and asked him his name. The German soldier named Erich was 17 years old, he learned, and was afraid Andrews would kill him. After Andy explained he would never murder anyone because he is a Christian, Erich said, “I Christian too!” The two of them, both wounded by each other, hobbled together to the nearest aid station.

Erich gave Andy a small golden cross, which he kept for the rest of his life.

After returning from the war, Andrewsmarried his wife, Hellon, and had two children, Al and Sarah. Al Andrews said his father struggled throughout his life to reconcile his faith with the horrific violence he had experienced and carried out as a young man.

“Back then, if you were called up, you went to war,” Al Andrews said. “And I feel like as he talked about it, he was doing something that needed to be done because of the horrors of war. But I don’t know if he ever really reconciled it. It was a tension in him, as I think it probably would be for any person of faith.”

When Al Andrews and his father visited Normandy in 1994 to commemorate the 50th anniversary of the invasion, he remembered that Andy kneeled down and wept among the graves of the Germans, pleading for their forgiveness.

“It was just so moving to me, because his deepest grief was not what was done to him — and he was wounded several times — but what he did to them,” Andy’s son noted. 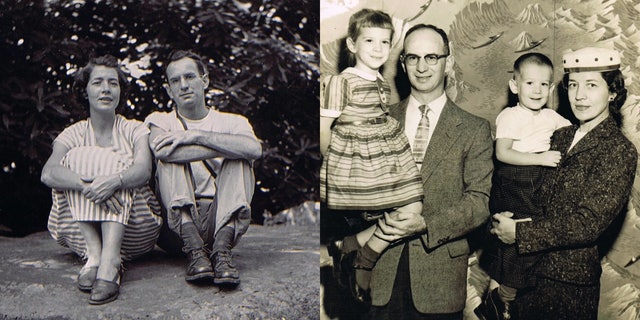 Left: Andy Andrews and his wife, Hellon, in 1949; right: Andy and Hellon with their children, Sarah and Al, in the 1950s.
(Casemate Publishers)

Andy Andrews would go on to serve in Christian youth ministry for many decades, a vocation he noted came upon him when he encountered the young German boys in the machine gun nest.

In the concluding remarks of his memoir, Andrews reflected on the healing he experienced by recounting his war stories to many audiences over the years, and he urged other veterans to do the same.

“Many former soldiers simply do not believe an audience will be able to grasp the terror of combat and the horrors they have witnessed on the battlefield,” he wrote. “Other veterans may simply believe they were not heroes and have no stories worth relating.”

Andrews encouraged such veterans to overcome their reticence. 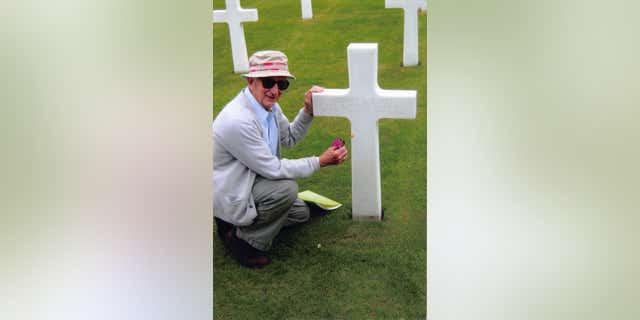 Andy Andrews paying his respects to a slain soldier at the Normandy American Cemetery in Normandy, France.
(Casemate Publishers)

“By helping to bring to light the terrible suffering and horrors that inevitably accompany all wars, I also believe we veterans can perhaps prevent history’s repetition,” he said.

Speaking at his father’s memorial service, Al Andrews said, “During the last year of his life, when you asked Dad how he was doing, he would always say, ‘Well, I can’t hear, and I can’t see, but God is good.’ And he told us that in the midst of pain and trials to look for God’s goodness. It’s always there.”

“As I watched him day by day going about his hopeful, gentle, joy-filled life, caring for and loving everyone he came across, he taught us that if you love, people will see Christ,” Al Andrews added.