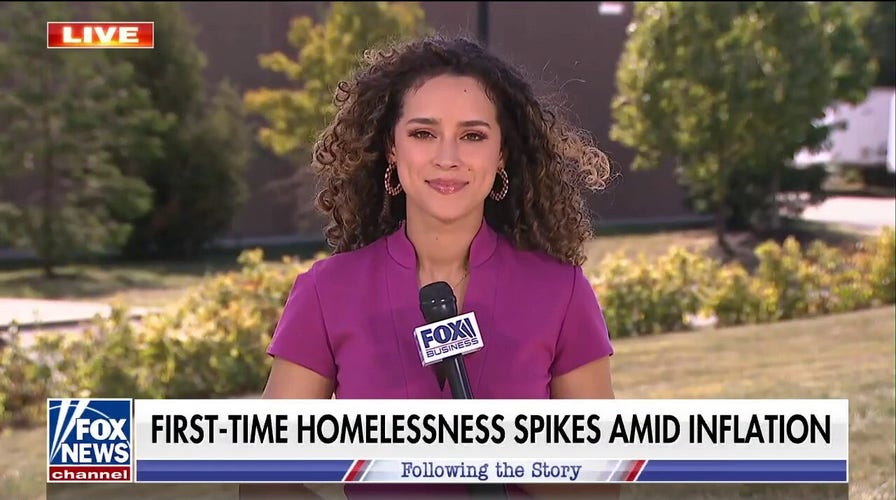 FOX Business correspondent Madison Alworth reports from the streets of New York City, where she interviews Raul Rivera, who is newly homeless on ‘The Story.’

The humanitarian crisis of homelessness festers in broad daylight today just steps from the tourist-packed heart of Manhattan.

One man slept on a sidewalk in the rain with trash, food and filth littered around him on West 43rd Street this past Sunday morning, exactly two blocks from where New York City drops its iconic New Year’s Eve ball in Times Square.

A toaster oven sat next to the man, which he apparently used to heat his food on the sidewalk by plugging it into a light pole. New York City utility poles have an accessible box at the bottom, which contains ordinary household electrical sockets.

The man slept in front of the Westside Theatre, the home since 2019 of the off-Broadway hit and tourist attraction “Little Shop of Horrors.” 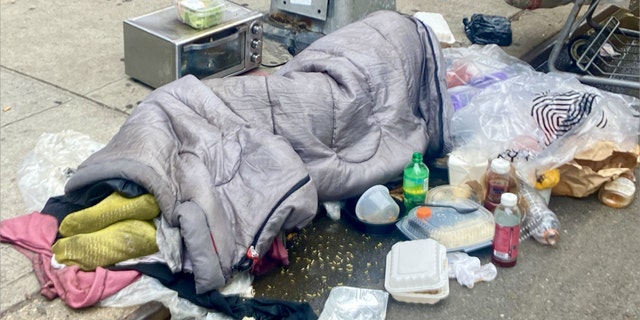 A man sleeps in the rain on the edge of the sidewalk at West 43rd Street in Midtown Manhattan on Sunday, Sept. 11, 2022, just two blocks from Times Square. He had a toaster oven by his side, which he apparently plugged into the base of a city light pole to heat his food.   (Kerry J. Byrne/Fox News Digital)

“This is the greatest city in the world and this is unacceptable,” said Salomon.

The theater of the absurd proliferates even as the city’s Dem leaders dump billions of taxpayer dollars into failed programs and shelters that are run by private contractors.

Salomon says he spent years living on the streets and also time behind bars in state custody.

The city shelters, in his opinion, “are worse than prison” — that’s one reason why so many people prefer a hard life on the streets, he suggested.

“Prison workers have supervisors and are trained to respect the privacy of the men in prison,” he said. “Shelters are run by some loudmouth from the neighborhood who knows the mayor and hires their friends with city money.”

ON 9/11 ANNIVERSARY, FAITH LEADERS NATIONWIDE OFFER PRAYERS, COMFORT AND HOPE FOR OUR COUNTRY

“They’re unsafe and inadequate,” he added.

“When you make that decision to lie down and sleep on the sidewalk, it means you’ve given up. It means you’re not getting the help you need,” said Salomon. 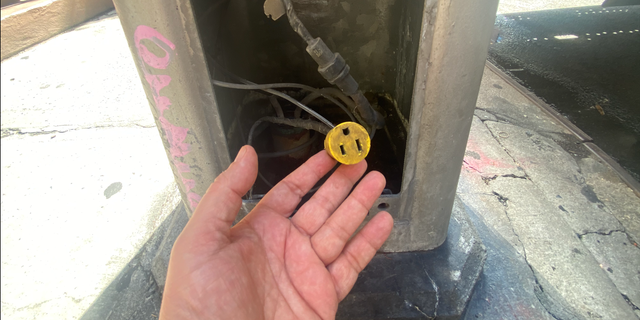 Containers of food littered the street in the gutter next to man with the toaster oven, along with a shopping cart full of empty cans and bottles.

Homelessness in the neighborhood “is an ongoing problem and we’re highly concerned about the welfare of these individuals,” Westside Theatre general manager Terry Byrne told Fox News Digital in an interview.

NYC spends about $43,750 per year per homeless person — 50% more than it spends on each schoolchild.

New York City’s homeless population has surged in recent years to 80,000 people, according to The Bowery Mission, a 150-year-old agency serving the hungry and homeless, citing federal data. 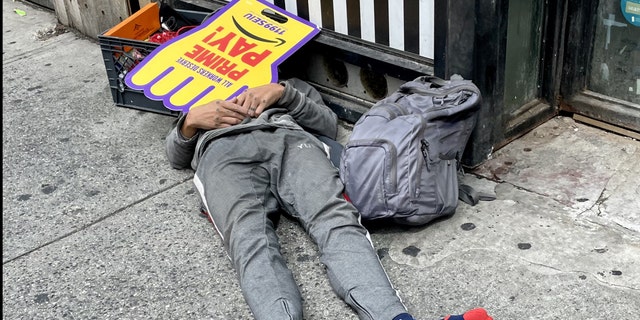 On midday this past Monday, Sept. 12, 2022, a man slept on Eighth Avenue in Manhattan just one block from Times Square. His face was covered by an SEIU Local 1199 sign demanding "prime pay!" for workers.  (Kerry J. Byrne/Fox News Digital)

“Homelessness in New York City has reached the highest levels since the Great Depression of the 1930s,” the Coalition for the Homeless reports.

The New York City Department of Social Services and Homeless Services website says that 55,338 people, including more than 18,000 children, slept in city shelters on Sept. 11, 2022, the same day the man with the toaster event slept outside Westside Theatre.

“There are many people making money off this tragic situation but not delivering the services that the city needs,” he said.

The crisis comes despite billions spent on failed programs.

New York City’s Department of Social Services and Homeless Services boasts an annual budget of $2.1 billion, while former comptroller Scott Stringer reported last year that the Big Apple spent a total of $3.5 billion on homelessness in 2020.

That adds up to an annual spending of $43,750 per homeless person — about 50% more than the city spends per child on education. 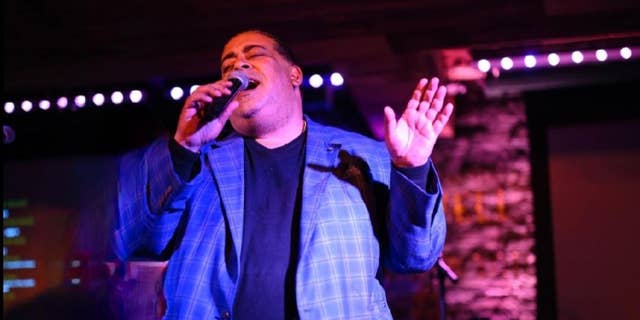 One Vanderbilt, New York City’s newest luxury skyscraper that towers 1,401 feet over Midtown Manhattan — 151 feet taller than the Empire State Building — cost about $3.1 billion for private developers to build, according to industry sources.

That total is less than the city’s annual spending on homelessness. 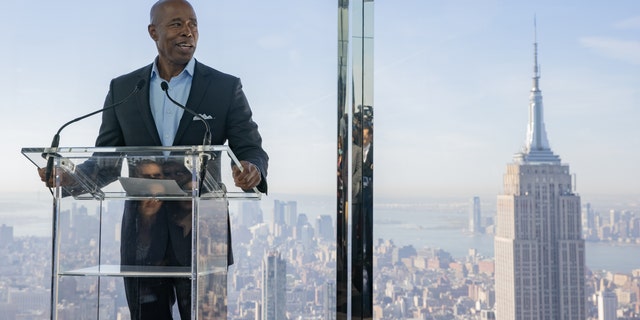 Yet heartbreaking images of the homeless living in deplorable conditions on the streets shock visitors who have flooded back to New York City this year — especially in high-visibility marquee locations in and around Times Square.

In recent weeks, “The Crossroads of the World” has welcomed more than 350,000 pedestrians each day, according to the Times Square Alliance. That matches and even exceeds the pre-pandemic numbers of 2019.

A person slept outside an empty storefront at the corner of Eighth Avenue and West 45th Street on Monday, wearing socks and sweatpants. 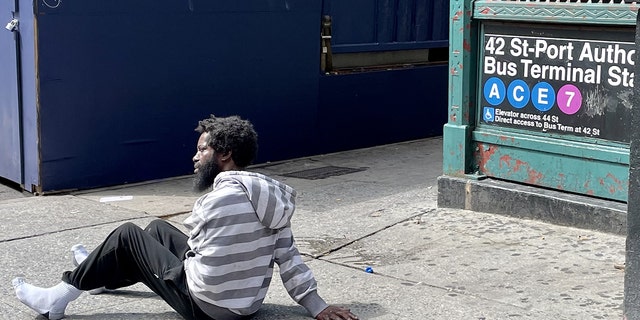 A man sat bleary-eyed on the corner of Eighth Avenue and West 44th Street in Midtown Manhattan on Monday, Sept. 12, 2022, outside one of the entrances to the Port Authority subway station. Some 350,000 visitors pass through Times Square each day just a block away.  (Kerry J. Byrne/Fox News Digital)

The person’s face was covered by a cardboard sign from New York City Local 1199 of the Service Employees International Union (SEIU) touting “prime pay!” for workers.

One man, also without shoes, sat bleary-eyed outside an entrance to the 42nd Street/Port Authority subway station at the corner of Eighth and 44th Street.

“Everybody needs to grow up and fix the problem.”

His right hand rested on the filthy sidewalk, while his left arm was wrapped up inside his jersey. 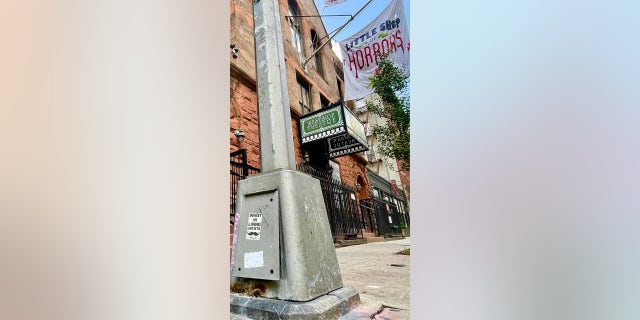 Westside Theatre in New York City has been the home since 2019 of "Little Shop of Hours," a popular Theater District tourist attraction. A man slept in filth just outside the theater on Sunday Sept. 11, 2022 and used a New York City utility pole for his toaster oven. (Kerry J. Byrne/Fox News Digital)

Steps away, a pile of debris spilled out of a trash bin at the corner of West 43rd Street, one of the busiest pedestrian intersections in Manhattan.

She cited a long list of reasons for the city’s homeless explosion.

“They emptied the jails, they shut down Broadway and business for two years, they ruined education for children, they made drug use aspirational, their mandates forced people to lose their jobs, they flooded the city with illegal immigrants — and now we have the cost of the Biden economy,” said Toboroff.

Fox News Digital reached out to NYC’s Department of Social Services and Homeless Services for comment.

“Everybody needs to grow up and fix the problem.”