New York’s iconic bus terminal, often held up as a forlorn reminder of the seedier elements of the city’s past, could be transformed into a state-of-the-art facility by 2031 under plans detailed Thursday.

It could cost as much as $10 billion to overhaul the 72-year-old Port Authority Bus Terminal, with plans for a new terminal on the site of the existing one. The design calls for an adjacent staging and storage area for buses when they aren’t in use, and for this staging area to be used to continue transit operations while the old terminal is demolished in stages.

About 3.5 acres of public green space would eventually cover up an enclosed ramp system connecting the terminal to the Lincoln Tunnel.

About $3 billion for the bus terminal project will come from the Port Authority of New York and New Jersey’s capital budget, said Richard Cotton, the authority’s executive director. The authority will seek federal dollars, and it also plans to sell the air rights to four proposed towers to help pay for the new terminal. Cotton added that the project will be built on Port Authority land and won’t require the taking of private property.

Architectural designs for the project will be handled by a joint venture comprising the London-based firm Foster + Partners and Chicago-based A. Epstein and Sons International, the Port Authority announced.

The bus staging area would alleviate congestion and pollution from intercity buses idling as they wait to pick up passengers on the street, and accommodate buses that originate in New Jersey which currently park in on-street lots or drive back out through the congested Lincoln Tunnel before returning to Manhattan for the afternoon commute. 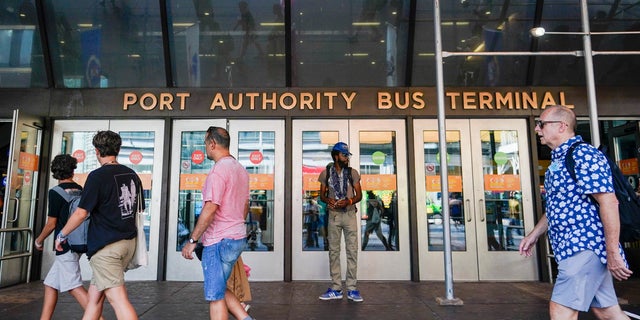 Pedestrians pass an entrance to the Port Authority Bus Terminal in New York. New York’s iconic but decrepit bus terminal could be transformed into a state-of-the-art facility by 2031. Officials on Thursday detailed plans for the $10 billion overhaul of the 72-year-old terminal.  (AP Photo/Mary Altaffer)

“This design will get intercity buses off our streets, create park space and greatly improve the street level experience for the neighborhood,” said Rep. Jerry Nadler, a fierce opponent of earlier plans that would have relocated the terminal a block west in the Hell’s Kitchen neighborhood.

A similar Manhattan megaproject, the multibillion-dollar redevelopment of the aging Penn Station rail hub, has drawn criticism from neighbors over its plans for new commercial and residential buildings around the station.

Over the years, the bus terminal has been held up as a symbol of New York’s grittiness. A statue of Ralph Kramden, the wisecracking bus driver from the 1950s show “The Honeymooners,” stands outside its main entrance, and the area provided an apt backdrop for “Midnight Cowboy,” the 1969 film that delved into the underworld of hustlers and addicts.

It has also been the butt of jokes for its leaky ceilings, faulty air conditioners, dirty rest rooms and frequent delays. Cotton on Thursday called the terminal “outdated, undersized and completely ill-designed for the number of people who want to use it.”

Pre-pandemic, the terminal handled more than 250,000 passenger trips on weekdays, making it the busiest in the world, according to the Port Authority.