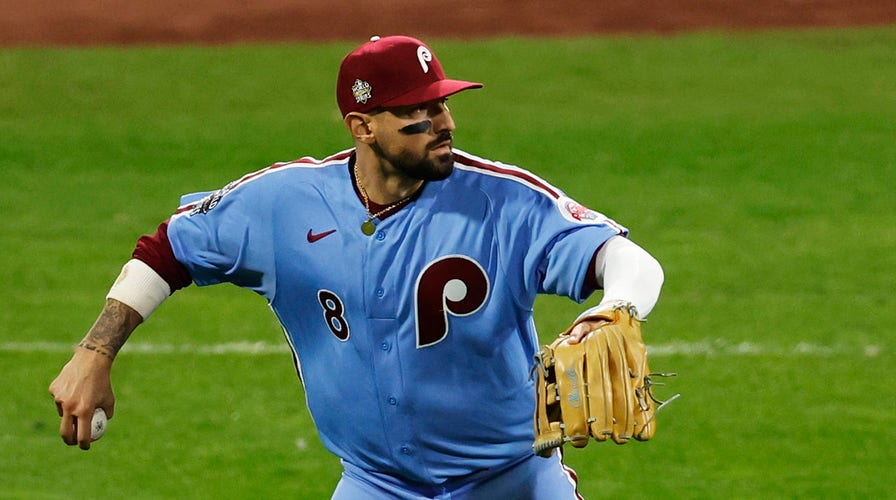 Houston Astros star Justin Verlander talks to reporters after the team defeated the Philadelphia Phillies in Game 5 of the World Series.

Citizens Bank Park was the place to be Thursday night — until it wasn’t.

The crowd was raucous all night, but when the Houston Astros earned a 3-2 win to take a 3-2 series lead, all went sour. 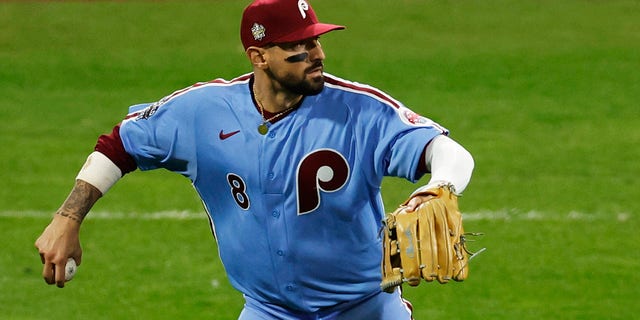 Nick Castellanos of the Philadelphia Phillies fields the ball in the ninth inning during Game 5 of the 2022 World Series against the Houston Astros at Citizens Bank Park Thursday, Nov. 3, 2022, in Philadelphia.
(Brian Garfinkel/MLB Photos via Getty Images)

With fans ripping their hometown heroes, the outfielder’s wife, Jess, took to Twitter to show her displeasure with the Philly faithful.

“Need all those rough Phillies fans to direct their attention and negativity towards the other team and not us let’s to [sic] philllssssss,” she tweeted during the game.

After the game, Jess indicated a fan spoke rudely to one of her children.

“To the absolute bimbo who just talked to my kid like that I got four more years here SEE YOU SOON,” she tweeted shortly after the game, referencing the five-year, $100 million contract Nick signed with the Phillies before the season.

JUSTIN VERLANDER ON FINALLY RECORDING FIRST WORLD SERIES WIN: ‘ONE OF THE BEST FEELINGS IN MY CAREER’

Nick and Jess have a son who was born in May, and Nick has a nine-year-old son from a previous relationship.

Nick’s mother, Michelle, also got in on the action.

“Phillies fans taking swings at my family … you suck. Get a life,” she tweeted after the loss.

Castellanos is struggling, hitting .150 this World Series and .197 for the postseason, but he’s suddenly become a defensive asset after being a defensive liability much of his career.

It isn’t just Castellanos struggling. The Phillies are 1 for their last 21 with runners in scoring position since Game 1. They were no-hit in Game 4 and went a combined 6-for-60 (.100) in Games 4 and 5. 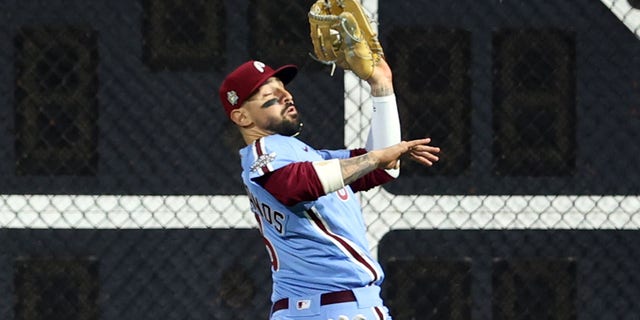 Nick Castellanos of the Philadelphia Phillies catches a fly ball for the second out of the eighth inning of Game 5 of the 2022 World Series against the Houston Astros at Citizens Bank Park Thursday, Nov. 3, 2022, in Philadelphia.
(Rob Tringali/MLB Photos via Getty Images)

Now, they will try to stay alive in Houston Saturday to force a deciding Game 7 Sunday.