The University of Notre Dame is updating the school’s fight song after the famous tune went unchanged for nearly a century, adding the word “daughters” in an attempt to recognize the University’s female students.

“Notre Dame Victory March… will now specifically reference both the ‘sons and daughters’ of the University,” University President Rev. John I. Jenkins said in a statement about the change Friday.

The change coincides with the 50th anniversary of Notre Dame’s decision to admit undergraduate women to the school.

“The success Notre Dame enjoys has been shaped by the extraordinary leadership and contributions of the women who have been and are a part of the Notre Dame community — beginning with the four Holy Cross sisters who arrived in the Indiana wilderness in 1843, to those who lead, teach, learn, minister and work here today,” Jenkins said. “On this occasion of the anniversary of the admission of undergraduate women in 1972, we celebrate the invaluable contributions of women as students and graduates. The re-imaging of the Main Circle will be a tribute at the heart of our campus to the ways in which these women have inspired, led and enriched us.”

Notre Dame’s fight song is one of the most recognizable in the country, gaining fame due in large part to the success of their football program throughout the 20th century. 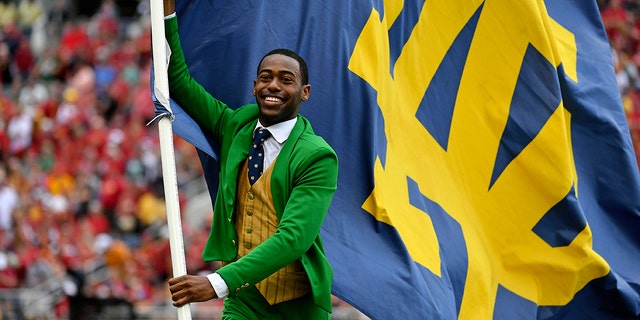 The song has been played on the school’s campus since 1909, making its debut at athletic events a decade later. Former band director Joseph Casasanta rearranged the lyrics in 1928 to the version most famous today, going unchanged until the university unveiled the new version last week.