Notre Dame quarterback Drew Pyne announced that he is entering the transfer portal. 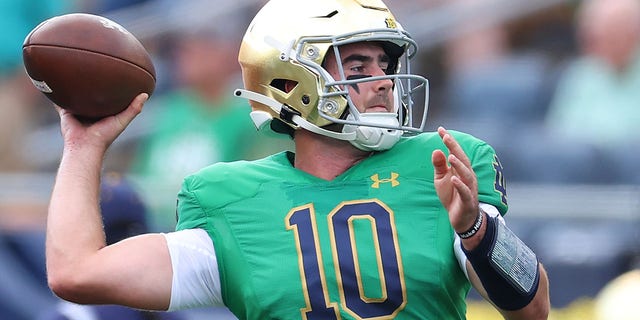 Drew Pyne of the Notre Dame Fighting Irish warms up prior to the game against the California Golden Bears at Notre Dame Stadium in South Bend, Indiana, on Sept. 17, 2022.
(Michael Reaves/Getty Images)

“One of my proudest honors is to have been a student-athlete at the University of Notre Dame. I have been blessed to be among great coaches and teachers and play with teammates I consider brothers. Our bonds will be lifelong. Now, it’s time for me to take on a new challenge, and I will be entering the transfer portal,” he wrote.

“While I’m excited about what lies ahead, I want to thank the entire Notre Dame community for their support. I sm forever grateful for the experience and memories.”

The redshirt sophomore suddenly took on a starting role this season when starting quarterback Tyler Buchner was injured in Week 2.

The beginning of the season was rough for the Fighting Irish. A season-opening loss to Ohio State was okay to live with, but then they suffered a devastating defeat at home to Marshall. However, after starting 0-2, Notre Dame finished the season winning eight of its final 10 games, including tilts against Clemson and North Carolina. 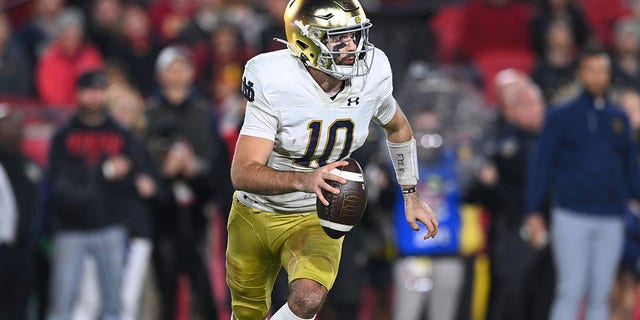 Pyne completed 64.6 percent of his passes for 2,021 yards, 22 touchdowns and six interceptions in 2022. His impressive 2022 season would have put him in the thick of the quarterback competition in 2023 and he may have been the favorite, but instead, he will be a top option in the portal. 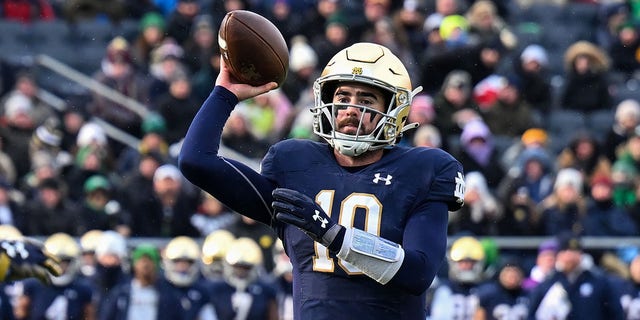 Quarterback Drew Pyne of the Notre Dame Fighting Irish throws a touchdown in the first half against the Boston College Eagles at Notre Dame Stadium in South Bend, Indiana, on Nov. 19, 2022.
(Quinn Harris/Getty Images)

Now, Notre Dame will have to decide between Buchner (who has just 85 passing attempts in his college career), backup Steve Angeli and incoming QB Kenny Minchey.