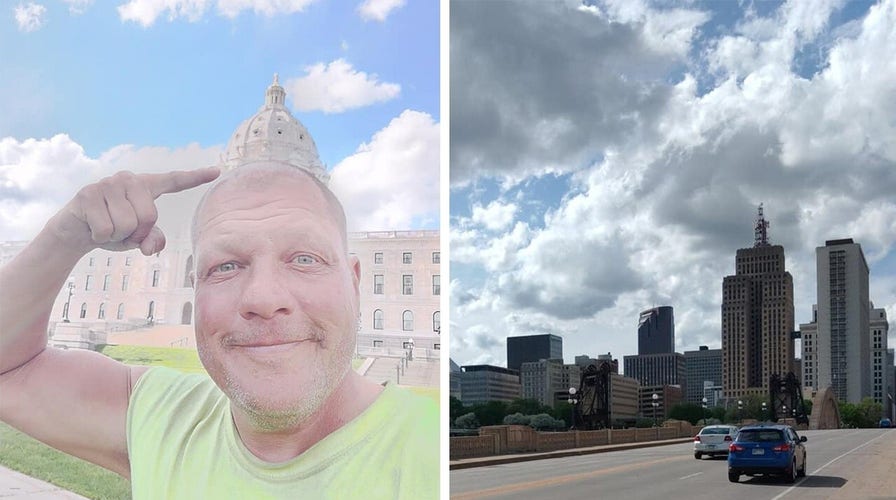 Bob Barnes, the man who is cycling to all 50 U.S. state capitals, reached capital number 42 of St. Paul as he nears the close of his cross-country journey — which began almost one year ago.

Barnes, 52, of Syracuse, N.Y., told Fox News Digital that while he faced some negative interactions with locals, the trip took a pleasant turn in the outskirts of the Minnesota city.

“There are some areas of Minnesota where people are uptight,” said Barnes, who reached St. Paul on May 20.

“There are some areas, St. Paul in particular, [where] they’re a little judgmental,” he said.

Barnes said, “I don’t want to bash everybody else, because I was treated really well by a lot of other people. So that’s why I’m saying it’s inconsistent.”

“The only thing consistent about Minnesota is the terrain,” he added. “It’s been really easy to travel out here.” 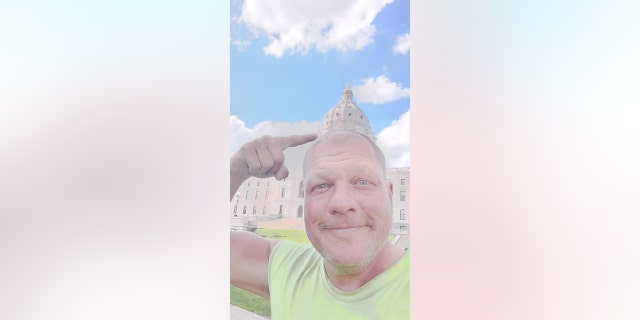 Bob Barnes, 52, of Syracuse has been cycling to all 50 state capitals in one year. Here’s a photo he captured when he arrived at capital 42 on his trip — St. Paul, Minnesota.  (Bob Barnes) 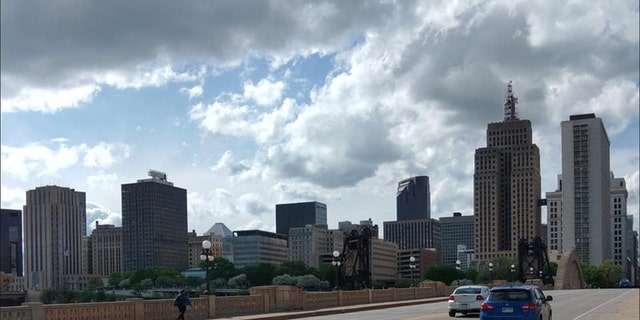 Barnes said he was disappointed by St. Paul (pictured here) because of some negative interactions he had — though the trip took a turn when he was met with "a whole different vibe." (Bob Barnes)

“I was disappointed in Saint Paul,” Barnes later added.

At a laundromat where he was washing and drying his clothes and shoes, a woman approached him and “demanded that I put my shoes on,” Barnes said.

Barnes responded that he would, but also joked about how wet they were.

She didn’t respond well to that either, he said.

“The only thing consistent about Minnesota is the terrain. It’s been really easy to travel out here.”

“It was just a simple interaction — but those are the things that I base all my observations on,” Barnes said. 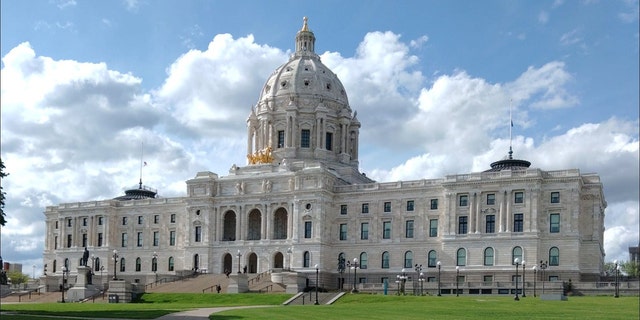 Barnes said he faced negativity from some people in St. Paul. "That’s what I saw — that’s what I experienced. And I feel as though I gave it plenty of opportunities for somebody to step up." (Bob Barnes) 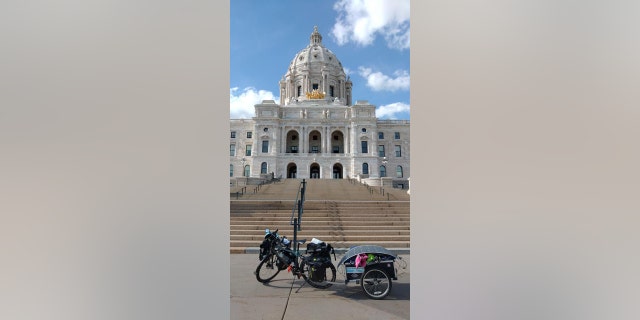 Bob Barnes snapped this photo of his bicycle and gear in front of the Minnesota capitol building in St Paul. (Bob Barnes)

Barnes said that after he left St. Paul, everything changed for him about 30 miles outside the city.

“Here I am with my head down. I’m feeling dejected,” he said, describing his mood at that time.

“And now, people are starting to come up to me, all talkative and inquisitive with a whole different vibe. It was really weird.” 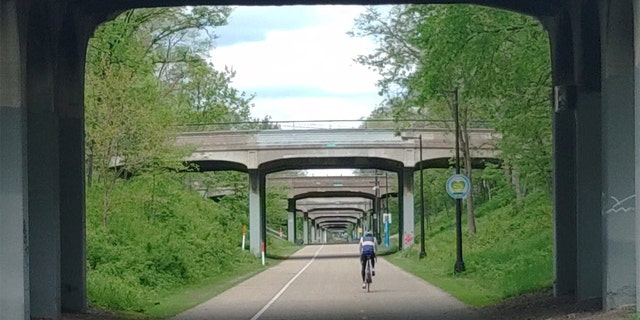 When Barnes got about 30 miles outside St. Paul, he said he met up with a lot of very nice cyclists who asked him about his trip.  (Bob Barnes) 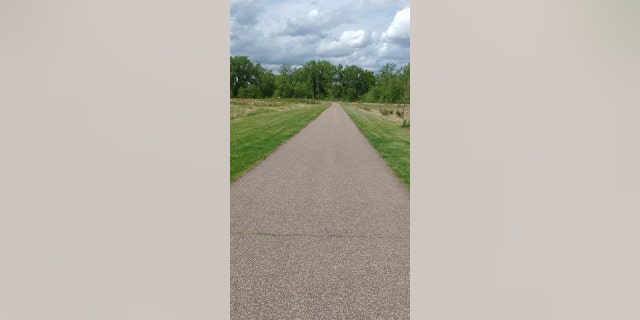 "Minnesota’s been the easiest state to get around. We’re just moving along," Barnes said. One of Minnesota’s many bike trails is pictured.  (Bob Barnes)

“The people up there were actually more … inquisitive than anywhere else,” Barnes added.

“There were so many cyclists and everybody just, one after the other, pulled up from behind me and just, ‘Oh, where are you going, what are you doing?’ And we’d stop and talk and that turned me around back to being in a good mood.”

Along the way, one of his Facebook followers met up with Barnes; they rode together for a bit, which made time go by faster, he said.

“When you’re with somebody, they’re easy miles,” Barnes said. “It’s easy to pedal. You don’t realize you’re pedaling. You’re just having a conversation and moving along nice.“

While in Minnesota, Barnes reached another milestone: crossing the Mississippi River one last time.

Barnes ended up crossing the Mississippi River a total of nine times on his trip, which began back on Aug. 1, 2021 — a year ago. 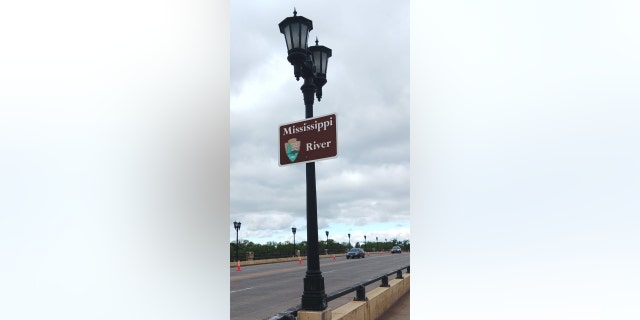 While in Minnesota, Barnes crossed the Mississippi River for the ninth and final time on his trip.  (Bob Barnes) 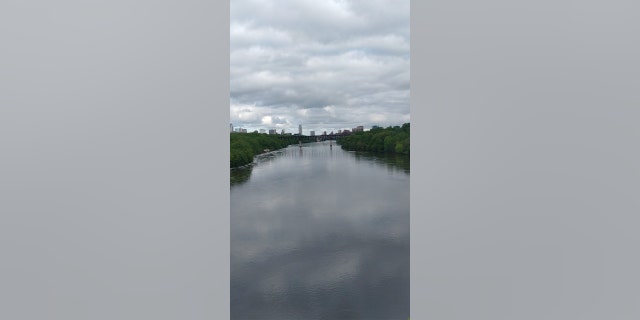 During one of his last nights in Minnesota, a follower of Barnes gifted him a room stay at a casino resort.

The follower works as a security guard at the casino and offered Barnes a $25 voucher for dinner along with his room.

“The casino — that was terrific,” Barnes said. “That’s kind of like what I needed.” 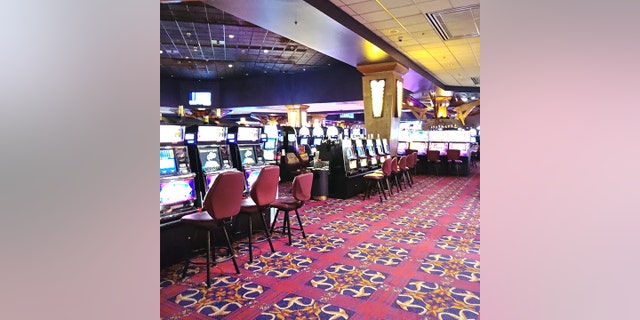 For one of his last nights in Minnesota, Bob Barnes stayed in a casino resort, courtesy of a Facebook follower who also bought him a meal voucher.  (Bob Barnes) 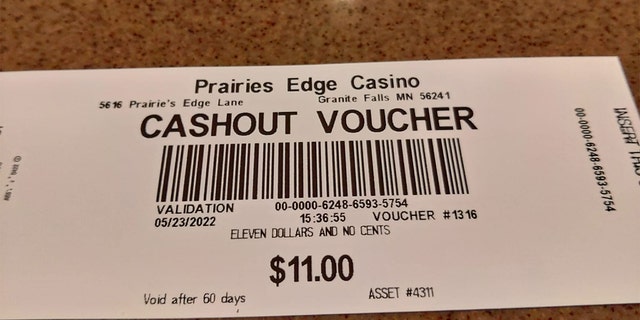 Barnes even played on a joker poker machine at the bar, where he won $6 in addition to the $5 credit he received in the casino. After his win, Barnes cashed out the $11.  (Bob Barnes)

He added, “But I don’t gamble. I feel too guilty if I gamble.”

What Barnes said he enjoyed the most at the casino was getting to mingle with other people.

When Barnes spoke with Fox News Digital about Minnesota in May, he had about 3,100 miles left on his trip. “It’s counting down. It’s really good,” Barnes said. “It’s a really good feeling right now.”

After he left Minnesota on May 24, Barnes headed to capital 43 on his trip: Pierre, South Dakota.

After he visited each of the Lower 48 states, Barnes took a ferry to Juneau, Alaska, from Canada and rode on his bicycle to the capitol — as he explained early on that he would be doing.

From there, he flew with his bike to Hawaii and rode from the airport to the capitol building.

Fox News Digital has been following Barnes’ journey across America and detailing it for readers in this unique Lifestyle series.

To catch up on — or enjoy once more! — his previous three trips before the one described here, read more below:

NY man cycling across America is bitten by a dog in Illinois: ‘I just kept going’