New York City Mayor Eric Adams on Thursday evoked Ellis Island’s reputation of welcoming immigrants at the turn of the 20th century in announcing the so-called “sanctuary” city would be opening “humanitarian emergency” centers to receive migrants arriving from Texas and other border states.

“More than 100 years ago, Ellis Island opened its doors to welcome in those ‘yearning to breathe free.’ Now, more than ever, it’s clear that we are again dealing with a humanitarian crisis created by human hands. While other leaders have abdicated their moral duty to support arriving asylum seekers, New York City refuses to do so,” Adams, a Democrat, said in a statement. “This is not an everyday homelessness crisis, but a humanitarian crisis that requires a different approach.”

“That’s why the Humanitarian Emergency Response and Relief Centers will be the first touchpoint for asylum seekers that will provide them with a range of services and support as families determine their next steps,” Adams continued. “This emergency response represents what we know must be done during this humanitarian crisis, as we continue to seek assistance from our federal and state partners to continue this work. Like the generations that came to our city before, New York will provide the thousands now coming to our city with the foundation to build a better life.” 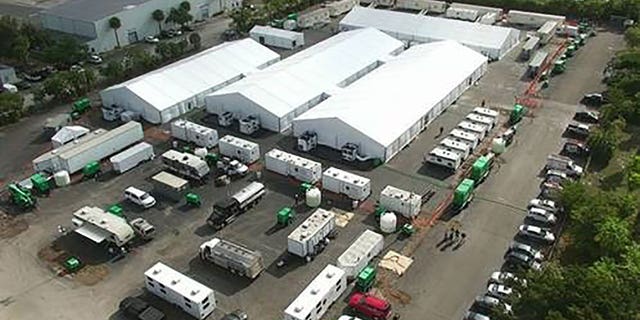 Adams’ office provided a past example of what the outside of a Humanitarian Emergency Response and Relief Center will look like. New York City’s setups will likely have some differences, the office said. (NYC Mayor’s Office )

The shift comes after Adams confirmed the death by suicide of an “asylum seeker” earlier this week who was housed in the New York City’s shelter system, shifting the blame from city workers to Republican Texas Gov. Greg Abbott. Approximately 11,600 migrants have arrived in the city’s shelter system in recent months, according to Adams’ estimates. The mayor said he would go “beyond” the 1981 “right to shelter” agreement, in guaranteeing everyone a bed while also reassessing how the law originally intended for the homeless population could be reapplied under the “unprecedented” influx of migrants.

DESANTIS-LINKED PLAN TO FLY MIGRANTS TO DELAWARE FALLS THROUGH: REPORT 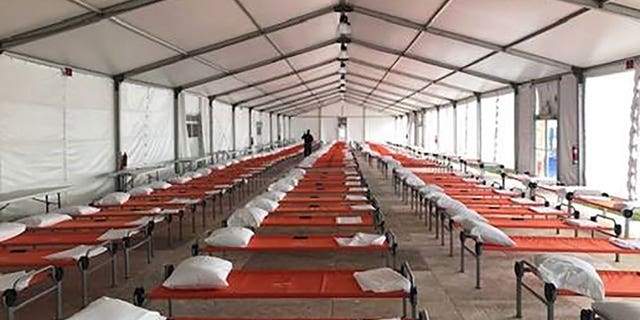 Adams’ office provided a past example of what the inside of a Humanitarian Emergency Response and Relief Center will look like that would only shelter single adults. Families would be sheltered in a humanitarian relief center with a different setup, the mayor’s office says.  (NYC Mayor’s Office )

Thursday’s announcement says, “To the extent possible, buses will arrive directly at Humanitarian Emergency Response and Relief Centers or be directed there from the Port Authority. Once arriving, all asylum seekers who want them will be provided with settlement options, as well as immediate health, safety, and legal information. Asylum seekers who do not or cannot find immediate housing will stay at humanitarian relief centers for approximately 24 to 96 hours (these times are subject to change depending on the situation). The additional assessment time will ensure asylum seekers understand their options and can get to their desired destination quickly and smoothly.”

According to the most recent Sept. 16 estimate from Abbott’s office, Texas has bussed over 2,500 migrants to New York City since Aug. 5. 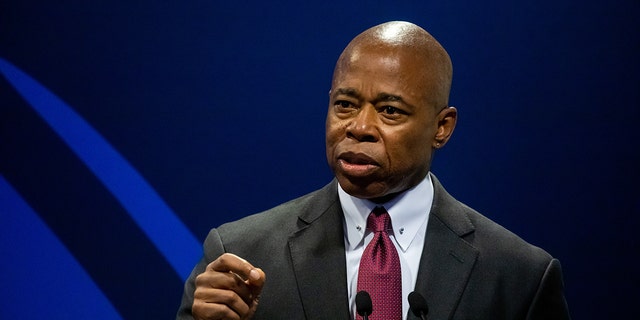 “The death of every migrant, including the 53 migrants who died in a tractor trailer in San Antonio, is on President Biden and his reckless open border policies,” Abbott’s press secretary, Renae Eze, told Fox News Digital on Monday. “Migrants on Texas’ buses willingly chose to go to New York, having signed a voluntary consent waiver available in multiple languages upon boarding that they agreed on the destination. Each bus is stocked with food and water and makes stops along the trip to refuel and switch drivers. Migrants are allowed to purchase any needed provisions or disembark at any of these stops, as they have been processed and released by the federal government. Instead of complaining about a couple thousand migrants being bused into his self-declared sanctuary city and using these migrants for political attacks, Mayor Adams should call on President Biden to take immediate action to secure the border—something the President continues failing to do.”