Two robbery suspects in Manhattan in New York City opened fire on police, who fired back before the suspects fled in a sedan, the NYPD said. (WNYW)

Police in New York City witnessed a robbery on Friday at approximately 2:45 a.m. and attempted to intervene when the suspects opened fire on the officers.

NYPD officers from the 13th precinct responded to the scene of a robbery in progress. Officers returned fire after the unidentified suspects during their escape began shooting at plain clothes police, the department said.

The robbery took place near the Doux Supper Club, a bar on 21st and 6th in New York City. The suspects fled the scene of the firefight in a silver Audi.

NYPD RETIREE SAYS OFFICERS ARE ‘FED UP,’ LEAVING IN DROVES FOR ‘GREENER PASTURES OVER WOKE POLICIES 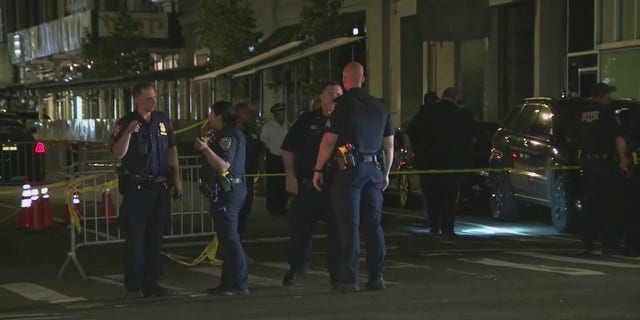 Two robbery suspects in Manhattan in New York City opened fire on police, who fired back before the suspects fled in a sedan, Friday, July 29, 2022, the NYPD said. (WNYW)

One stray bullet struck the side of a civilian’s car. No one was seriously injured during the exchange.

No arrests have been made, and the investigation is ongoing, according to the NYPD.

NYPD OFFICER OF 40 YEARS: I’VE NEVER SEEN NYC CRIME AS BAD AS IT IS RIGHT NOW

Violent crime has been on the rise in a variety of cities this year, with several on track to outpace last year’s bloody statistics. New York City has seen a surge of 25.8% so far in 2022. 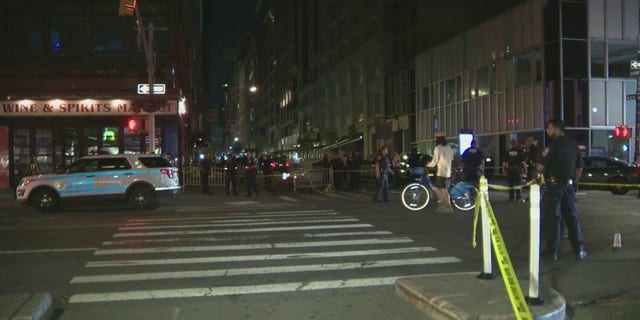 Two robbery suspects in Manhattan in New York City opened fire on police, who fired back before the suspects fled in a sedan, Friday, July 29, 2022, the NYPD said. (WNYW)

Mayor Eric Adams expressed frustration with a “bad criminal justice system” Tuesday in a speech addressing recent traffic crashes involving pedestrians, according to Spectrum News NY1. DiGiacomo, however, said the police are receiving no support from the governor or city officials.

John Caputo, a retired NYPD detective, warned Tuesday that officers are leaving the force in droves for “greener pastures” over the soft-on-crime policies that have affected policing and public safety as a whole.

“I have actually seen other people also go to other departments who have they just got trained by the NYPD have left for greener pastures for more money or just not this type of government that doesn’t back you at all,” Caputo told co-host Ashley Strohmier.