Forget being right or left-handed! Octopuses have a favourite ARM they use to grab prey, study finds

Whether it’s playing tennis or writing an essay, most people have a preferred hand.

Now, a study has shown that despite having eight arms to choose from, octopuses also have favourite appendages.

Researchers from the University of Minnesota recorded octopuses attacking various prey, and found they preferred certain arms over others when hunting.

The team hopes the findings could be used to develop next-generation, highly manipulative soft robots.

‘If we can learn from octopuses, then we can apply that to making an underwater vehicle or soft robot application,’ said Dr Trevor Wardill, an author of the study. 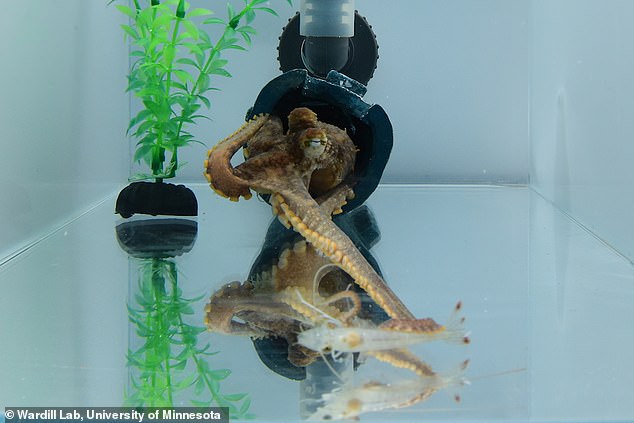 Researchers from the University of Minnesota recorded octopuses attacking various prey, and found they preferred certain arms over others when hunting

The California two-spot octopus, often simply called a ‘bimac’, is an octopus species native to many parts of the Pacific Ocean including the coast of California.

One can identify the species by the circular blue eyespots on each side of its head.

Bimacs usually live to be about two years old.

As they move across the seafloor or jet through the water, octopuses leverage all eight of their arms.

‘Normally when you look at an octopus for a short while, nothing is repeatable, said Dr Wardill.

‘They squirm around… and just look weird in their exploratory movements.’

In their new study, the team set out to understand whether the octopuses used their arms randomly when hunting, or if they had a preference.

The researchers studied the California two-spot octopus – a species that lives for about two years and can grow to the size of a tennis ball.

The octopuses were housed in a tank, where they hid in ornamental SpongeBob ‘dens’, with one eye facing outwards.

As the researchers dropped different types of prey into the tank, they recorded the octopuses’ reactions.

No matter what type of prey came by, each octopus attacked using the second arm from the middle.

Surprisingly, however, their recordings revealed that the octopuses used different attacking tactics, depending on the type of prey. 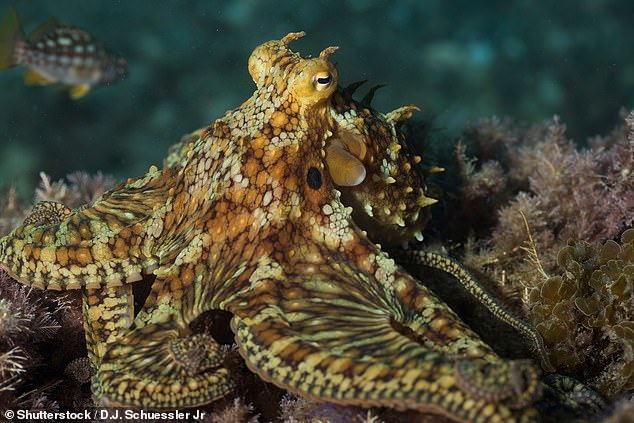 The California two-spot octopus, often simply called a “bimac”, is an octopus species native to many parts of the Pacific Ocean including the coast of California

When it was a crab, the octopuses pounced on the prey with a ‘cat-like movement’.

But when it was a shrimp, they were slower with their approach, using their second arm to contact the shrimp before using the two neighbouring arms to secure it.

The researchers were surprised to see these same attacking strategies used across different octopuses, with all of them showing a preference for their second arm.

The team now hopes to look at how neurons facilitate these arm movements.

Flavie Bidel, the lead author of the study, said: ‘Octopuses are extremely strong.

‘For them to grasp and open a door is trivial, given their dexterity.’

MYTHS ABOUT THE LEFT-HANDED

Professor Joshua Goodman, an economist at Harvard who carried out the research said left-handedness has long been viewed with suspicion.

‘During the Middle Ages, left-handed writers were thought to be possessed by the Devil, generating the modern sense of the word sinister from sinistra, the Latin word for left,’ he said.

The popular perception that left-handers are more gifted came later, he said, encouraged by anecdotal evidence including the fact that four of the last seven US presidents have been left-handed.

Professor Goodman suggests that what he sees as a clear cognitive deficit is down to the wiring of the brain.

The way the brain works is fundamentally connected with ‘hemispheric bias’ – the way different functions are associated with the left or right side of the brain.

Some scientists believe the choice to use the left hand over the right is influenced by the way this hemispheric bias developed in the womb, when the fundamental structures of the brain were first formed.