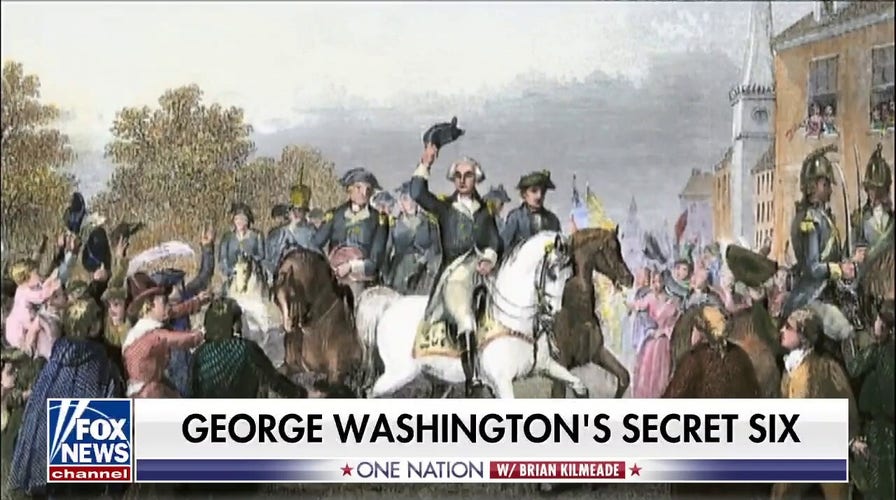 Fox News host Brian Kilmeade gives viewers a look at George Washington’s ‘Secret Six,’ a spy ring of agents loyal to Washington created to save and become a country, on ‘One Nation with Brian Kilmeade.’

The Washington Monument, a soaring tribute in the heart of the nation’s capital to George Washington, whose Abrahamic faith in American independence earned him the eternal distinction of Father of His Country, was completed on this day in history, Dec. 6, 1884.

The majestic 555½-foot tall obelisk stands in a commanding focal point on the National Mall in the center of Washington, D.C., east of the Lincoln Memorial, north of the Jefferson Memorial, south of the White House and west of the U.S. Capitol.

“On a breezy December 6, [U.S. Army] Lt. Col. [Thomas Lincoln] Casey supervised as the 3,300-pound capstone was brought out through one of the windows, hoisted to the scaffolding at the dizzying tip of the monument, and set in place. Casey then placed the 8.9-inch aluminum tip atop the capstone to the cheers of the crowd below,” writes the National Park Service.

ON THIS DAY IN HISTORY, DEC. 5, 1848, PRESIDENT POLK IGNITES CALIFORNIA GOLD RUSH WITH ADDRESS TO CONGRESS

“Evoking the timelessness of ancient civilizations, the Washington Monument embodies the awe, respect and gratitude the nation felt for its most essential Founding Father.”

The east side of the cap, facing the rising sun each morning, is inscribed with the Latin phrase “Laus Deo” — in English, “Praise be to God.” 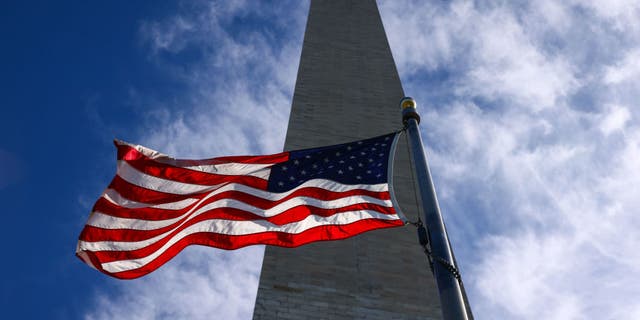 U.S. flag and the Washington Monument at the National Mall in Washington, D.C., United States, on Oct. 20, 2022.
(Beata Zawrzel/NurPhoto via Getty Images)

“First in War, First in Peace and First in the hearts of his countrymen,” General Henry “Light Horse Harry” Lee famously said in his eulogy of Washington, who commanded the Continental Army in the American Revolution, nearly single-handedly held the rebellion together in its darkest hours and then served two terms as first president of the United States.

The Washington Monument is the world’s tallest obelisk and was the tallest manmade structure in the world until its height was surpassed by the Eiffel Tower five years later.

Despite its honorific purpose and imposing physical stature, the Washington Monument was vandalized earlier this year.

ON THIS DAY IN HISTORY, DEC. 4, 1783, WASHINGTON BIDS FAREWELL TO HIS TROOPS AT FRAUNCES TAVERN IN NYC

“Have u been f—– by this,” read a message splashed on the monument in red paint in September. “Gov says tough s—.”

The United States Park Police arrestedone man for vandalismand temporarily closed the area around the base of the monument while they investigate.

“The Washington Monument embodies the awe, respect and gratitude the nation felt for its most essential Founding Father.”

Several others monuments throughout Washington, D.C., weredefaced during protestsin the summer of 2020, including the Lincoln Memorial, the World War II Memorial and the statue of General Casimir Pulaski.

The Washington Monument is a globally iconic image of the United States.

But it grew to its stature in fits and starts. 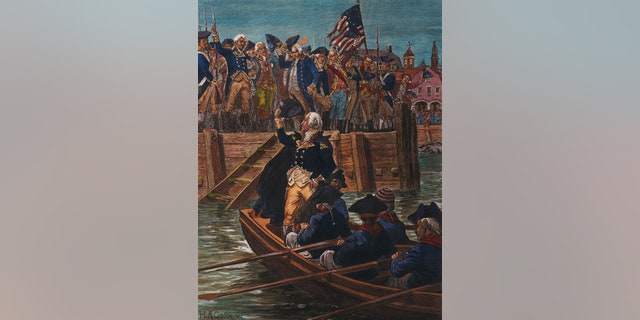 General George Washington leaving New York on Dec. 4, 1783, the day he delivered his farewell address to his troops.
(Getty Images)

The private Washington National Monument Society was founded in 1833 to build a tribute to the first president that would be “unparalleled in the world,” the NPS notes.

“From the first, the society had trouble collecting money,” historian John Lockwood wrote in Prologue magazine in 2016.

The organization was still well short of fundraising goals in 1845, but forged ahead by selecting a design for the monument submitted by Robert Mills, who had designed the Washington Monument in Baltimore and the U.S Treasury building next to the White House, according to Lockwood.

The Washington Monument stood as a mere nub of 156 feet tall for two decades. 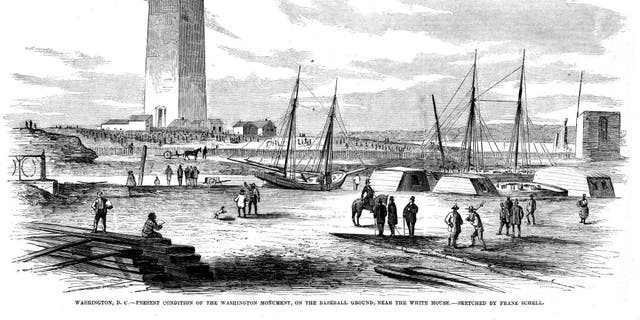 Illustration depicts the construction of the Washington Monument, "on the baseball ground, near the White House" (according to the caption) in Washington, D.C., circa 1875.
(Interim Archives/Getty Images)

Despite the celebratory start to the project, construction ceased in 1854 because of a lack of funds and the death of Mills the following year.

The Washington Monument stood as a mere nub of 156 feet tall for two decades.

Congress finally appropriated funds from the public coffers to complete the monument in 1876, under the guidance of the Army Corps of Engineers.

The monument was dedicated two months after its completion, on Feb. 21, 1885, the day before Washington’s birthday.

A statue of George Washington stands today in the ground-floor lobby.

“The monument, like the man, stands in no one’s shadow.”

The monument boasts a small museum at 490 feet and an observation deck at 500 feet.

The Washington Monument is built of 36,000 stones, including marble from Maryland and granite from several different New England quarries.

There are 897 stairs, along with an elevator to ferry visitors to the top.

“The Washington Monument towers above the city that bears his name, serving as an awe-inspiring reminder of George Washington’s greatness,” writes the National Park Service.

“The monument, like the man, stands in no one’s shadow.”