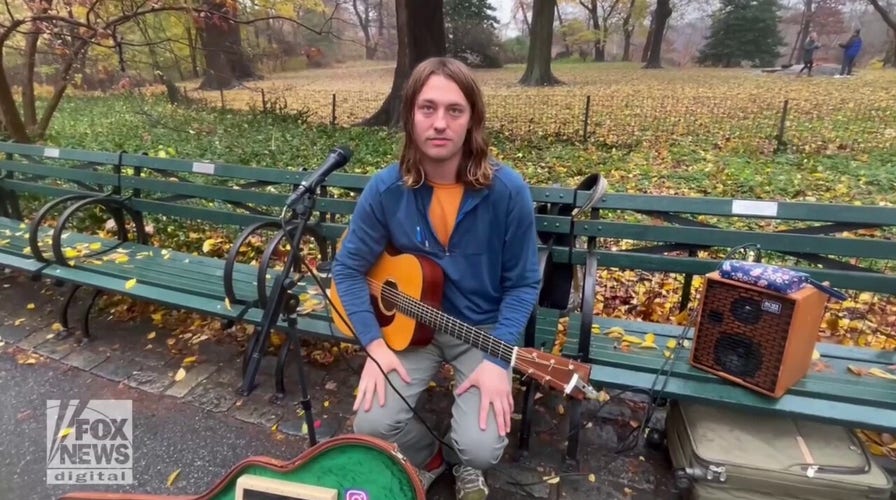 New York City musician Jules Avalon reflects on the power of John Lennon and the Beatles at Strawberry Fields in Central Park, located across the street from where Lennon was murdered on Dec. 8, 1980.

John Lennon, songwriting genius and founding member of The Beatles — a man who gifted the world with beautiful music that still rouses the human spirit long after his death — was murdered in New York City on this day in history, Dec. 8, 1980.

“John Lennon, outside of his apartment building on the West Side of New York, the most famous perhaps of all the Beatles, shot twice in the back. Rushed to Roosevelt Hospital. Dead on arrival.”

Cosell’s dramatic words spoken on national television, decades before the internet spread news instantly, were the first that many Americans heard of the celebrated musician’s death. The world learned soon after initial reports that Lennon was actually shot four times.

Lennon ignited pop-culture mania with The Beatles in the 1960s.

He went on to a hugely successful career as solo artist and peace activist in the 1970s.

He was murdered outside his residence, The Dakota, on Manhattan’s Upper West Side at 10:50 p.m. and pronounced dead at the hospital 25 minutes later.

Gunman Mark David Chapman, a deranged fan who received an autograph from the musician hours earlier, pleaded guilty to Lennon’s murder in 1981.

ON THIS DAY IN HISTORY, AUGUST 29, 1966, THE BEATLES PLAYED THEIR LAST LIVE PAID CONCERT

An estimated 100,000 Beatles fans flooded The Dakota and Central Park in the hours after the tragedy for a tear-filled vigil that shut down auto traffic across several blocks of Manhattan. 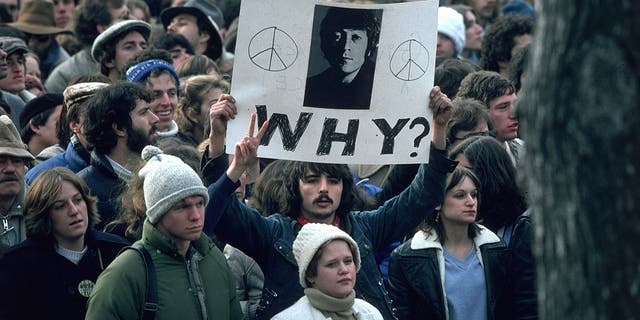 December 1980: Fans of John Lennon hold a vigil after he was shot dead by a fan on December 8th at his home in New York City.
(Photo by Hulton Archive/Getty Images)

The Dakota’s gracious vaulted entrance, the spot where Lennon was killed, is a daily global pilgrimage site today.

So, too, is a corner of Central Park across the street from the residence, dubbed Strawberry Fields in Lennon’s honor after a popular Beatles tune.

Both sites elicit emotion and reflection for visitors from all over the world, many of them born long after Lennon was killed.

“His music made people happy,” Ethan Doyle, 12, of Philadelphia, told Fox News Digital on Wednesday outside the stately residence, accompanied by his mother, Monique, and brother Brodie, 9. 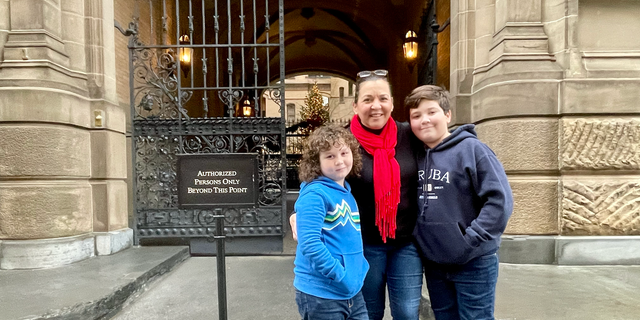 The entrance to The Dakota in Manhattan, where John Lennon was murdered in 1980. It’s a pilgrimage site to this day. "This place radiates importance," Ethan Doyle, right, 12, of Philadelphia, told Fox News Digital this week. He’s pictured with brother Brodie and mom Monique Doyle.
(Kerry J. Byrne/FoxNews Digital)

Strawberry Fields is highlighted by a black-and-white tile mosaic on a Central Park pathway with the word “Imagine,” a reference to one of Lennon’s best-known solo tunes.

The sounds of Lennon and the other Beatles — Paul McCartney, George Harrison and Ringo Starr — as well as the quiet murmur of a parade of fans fill Strawberry Fields throughout the day, every day.

It’s a testament to the power of Lennon’s music that it still attracts and resonates with the souls of strangers 42 years after the artist last walked the earth. 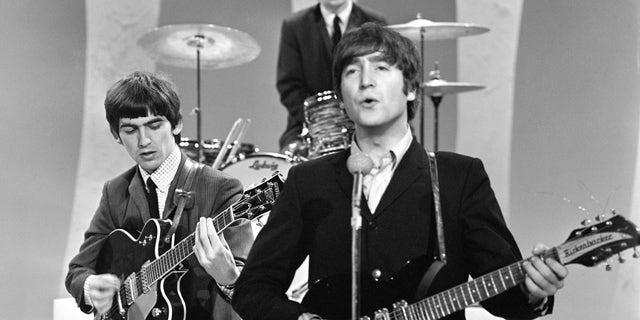 The 72nd Street subway station, directly beneath The Dakota, boasts sky-blue tiles in Lennon’s honor, also with the word “Imagine” in cloud white on one of the walls.

Lennon, a native of Liverpool, England, placed no. 8 on a 2002 BBC reader poll list of the 100 Greatest Britons of all time, between Queen Elizabeth I, who ruled England for 45 years in the 16th century, and Admiral Lord Horatio Nelson, the naval hero who saved the island nation at the Battle of Trafalgar in 1805. 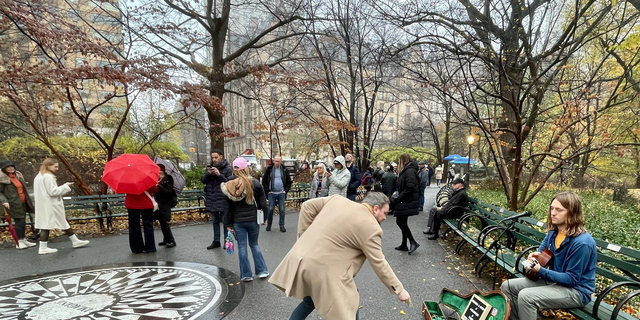 He and the Beatles burst onto the British music scene in 1963 and became a global sensation the following year.

The Beatles made their dramatic American debut in 1964, just 16 years before Lennon’s murder, at what’s now the Ed Sullivan Theater on Broadway.

It’s located a mere 18 blocks south of The Dakota.

The Beatles broke up in 1970, after writing, recording and releasing scores of hit songs in less than a decade that are still recognized pop-culture standards today. 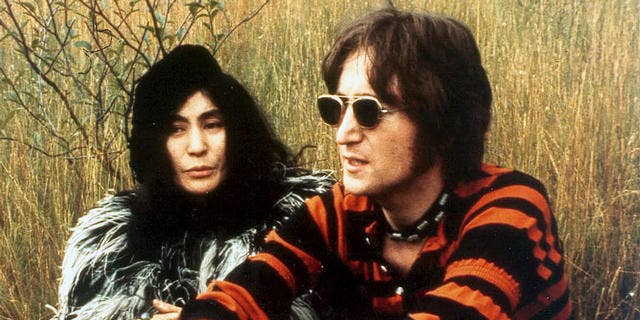 Yoko Ono and John Lennon are shown together in 1970.
(AP)

It was a profound period of artistic production in a dramatically short period of time — and rarely if ever matched in music history.

In 2022, thanks to the magic of modern technology, Lennon performed with his former songwriting partner Paul McCartney.

McCartney, in his tour of America this year, sang a duet with Lennon featuring vocals from his late bandmate isolated from The Beatles’ famous 1969 rooftop performance in London. The 72nd Street station of the New York City subway system is decorated with John Lennon memorial tiles. The station is located beneath The Dakota, where Lennon lived and was murdered on Dec. 8, 1980.
(Kerry J. Byrne/Fox News Digital)

One incredible testament to the ongoing appeal of The Beatles comes from Billboard.

“Like most of us he was often selfish and unpleasant,” influential British entertainment magazine New Musical Express wrote in its obituary of Lennon in December 1980.

“But he was never miserly with himself or his soul … He gave. He shared. And now [that] he’s gone we, too, seem diminished.” 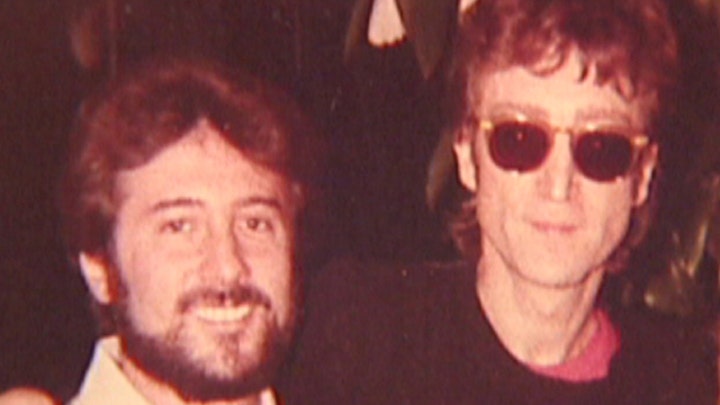