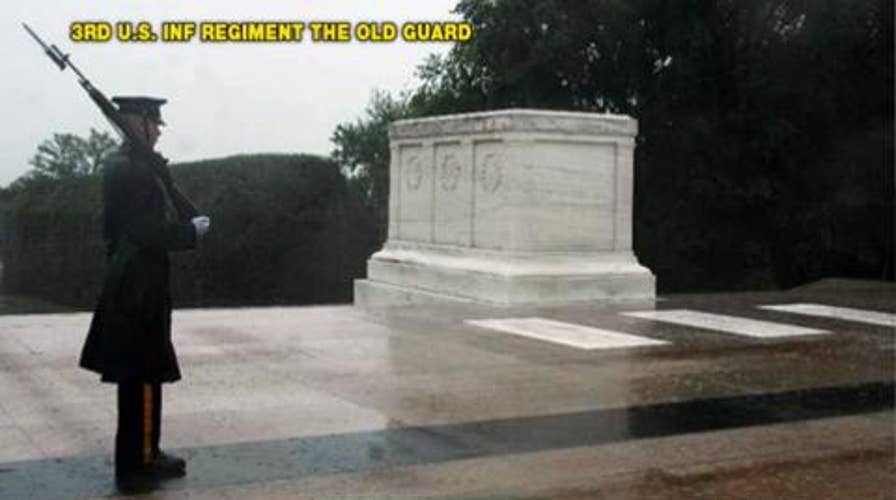 Powerful photos show a soldier from The Old Guard watching over the tomb of the Unknown Soldier in Virginia’s Arlington National Cemetery, even as the force of Hurricane Irene was felt throughout the region.

The United States Tomb of the Unknown Soldier was dedicated at Arlington National Cemetery — following a reverential selection process that spanned the Atlantic Ocean — on this day in history, Nov. 11, 1921.

The remains of the American hero buried beneath the tomb was chosen from thousands of unidentified doughboys killed in World War I and buried in France.

“Here rests in honored glory an American Soldier, Known but to God,” reads the inscription on the marble tomb.

ON THIS DAY IN HISTORY, NOV. 10, 1928, NOTRE DAME SHOCKS ARMY TO ‘WIN ONE FOR THE GIPPER’ AT YANKEE STADIUM

Crypts for Unknown Soldiers from World War II and Korea were added in 1958.

“The Tomb of the Unknown Soldier is Arlington National Cemetery’s most iconic memorial,” according to the U.S. Army’s online cemetery education program.

“It has stood at the heart of the cemetery, serving as a site for reflection on service, valor and sacrifice … The Unknowns represent all unidentified service members who gave their lives for the United States.” 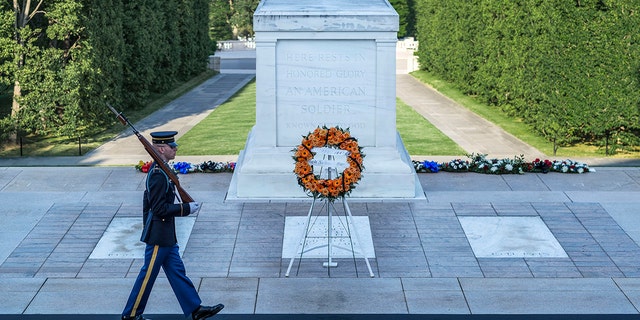 Among the purposes of the tomb: to help give comfort to the thousands of American families who never knew the fate of their loved ones lost overseas. Instead, they can know that their loved ones’ sacrifices are remembered by the nation.

Over 60,000 American service members are still listed as Missing in Action from World War II alone, according to the federal government’s Defense POW/MIA Accounting Agency.

It’s a somber reminder of the human devastation of that conflict.

“Here rests in honored glory an American Soldier, Known but to God.”  — Tomb of the Unknown Soldier

About 20,000 other Americans were lost and remain missing in conflicts that followed, including Korea, Vietnam, Cold War, Gulf War and War on Terror. The government no longer keeps or offers a number of missing from World War I. 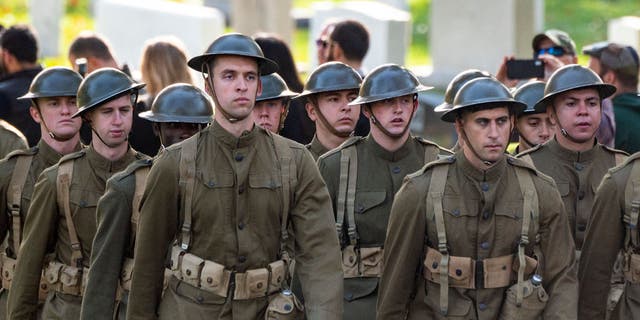 U.S. troops march during a joint full honors procession evoking the original 1921 funeral procession of a World War I unknown soldier, in commemoration of the 100th anniversary of the Tomb of the Unknown Soldier on Veterans Day in Arlington National Cemetery on Nov. 11, 2021 in Arlington, Virginia.
(Photo by Jim Watson-Pool/Getty Images)

Congress approved a resolution to fund the U.S. Tomb of the Unknown Solider on March 4, 1921, to be dedicated on Armistice Day — now Veterans Day — of that year.

The bodies of four unknown US soldiers were exhumed that autumn, one each from four different American cemeteries in France: Aisne-Maine, Meuse-Argonne, Somme and St. Mihiel.

Arlington National Cemetery describes in rich and powerful details the elaborate process that brought the first Unknown Soldier back to the United States.

“Early on the morning of October 24, 1921, Maj. Robert P. Harbold of theQuartermaster Corps, aided by French and American soldiers, rearranged the [four] caskets so that each rested on a shipping case other than the one in which it had arrived.” 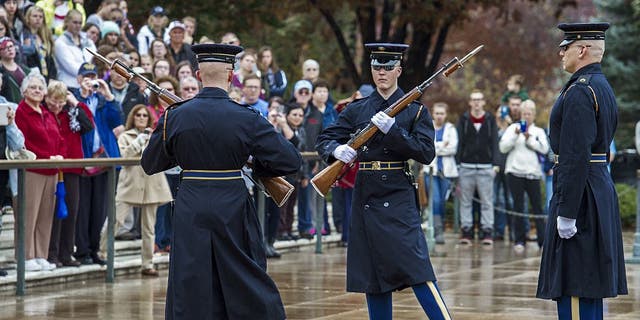 The Changing of The Guard ceremony is seen at the Tomb of the Unknown Soldier on Nov. 10, 2015, at Arlington National Cemetery in Virginia.
(PAUL J. RICHARDS/AFP via Getty Images)

Sgt. Edward F. Younger of Headquarters Company, 2nd Battalion, 50th Infantry, American Forces in Germany, was given the honor of choosing the Unknown Soldier, which he did by placing a spray of white roses on one of the caskets.

The Unknown Soldier was transported by caisson to the port of Le Havre and then by cruiser USS Olympia back to the United States.

“The Unknown arrived at the Washington Navy Yard on Nov. 9, 1921 … [and] lay in state in the U.S. Capitol Rotunda. About 90,000 visitors paid their respects during the public visiting period on Nov. 10, 1921,” according to Arlington National Cemetery.

“On November 11, 1921, the Unknown was placed on a horse-drawn caisson and carried in a procession through Washington, D.C., and across the Potomac River. A state funeral ceremony was held at Arlington National Cemetery’s new Memorial Amphitheater, and the Unknown was interred in the Tomb of the Unknown Soldier.”

President Warren G. Harding placed the Medal of Honor on the casket while foreign dignitaries offered their nations’ highest awards. President Harding led the nation in a two-minute moment of silence.

The tomb today is guarded 24 hours a day, 365 days a year by elite volunteer members of the 3rd US Infantry Regiment (The Old Guard), headquartered in nearby Fort Myer, Virginia.

It is the oldest active-duty infantry unit in the U.S. Army, defending the nation since 1784 and protecting the Tomb of the Unknown Soldier since 1948. 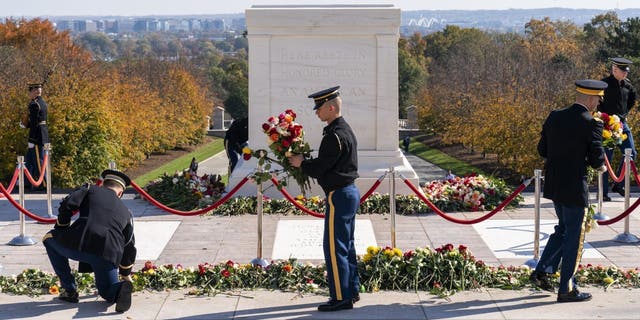 Soldiers with the 3rd U.S. Infantry Regiment, known as "The Old Guard," move flowers during a centennial commemoration event at the Tomb of the Unknown Soldier in Arlington National Cemetery on Nov. 10, 2021.
(Alex Brandon-Pool/Getty Images)

Their changing of the guard ceremony is a popular yet reverential tourist attraction, witnessed each day by visitors from across the United States and from all over the world.

“The Tomb Guards, also called Sentinels, are chosenfor this prestigious and highly selectivepostonly after rigorous training and a demanding series of examinations,” the cemetery reports.

The guards are guided by The Creed of the Sentinels.

“My dedication to this sacred duty is total and wholehearted,” the Creed begins.

It ends: “Surrounded by well-meaning crowds by day, alone in the thoughtful peace of night/This soldier will in honored Glory rest under my eternal vigilance.”