President Abraham Lincoln supposedly sent his sincerest condolences to a grieving mother in the historic Bixby Letter on this day in history, Nov. 21, 1864.

In the fall of 1864, Gov. John A. Andrew of Massachusetts sent a request to then-President Lincoln asking him to send his regards to Mrs. Lydia Bixby.

Bixby of Boston was believed to have lost her five sons during the Civil War, according to Abraham Lincoln Online.

And as the story he goes, he penned a letter to the grieving mother. 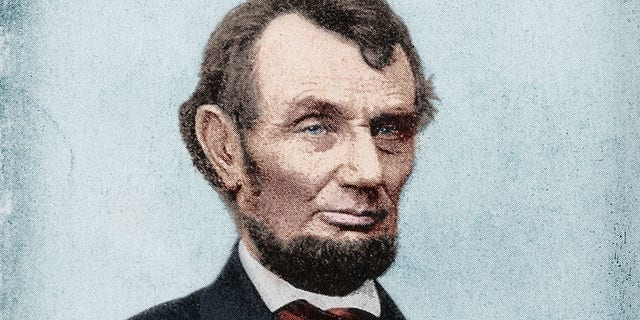 A colorized antique photograph portrait of Abraham Lincoln. "I feel how weak and fruitless must be any word of mine which should attempt to beguile you from the grief of a loss so overwhelming," the Bixby Letter reads in part.
(iStock)

I have been shown in the files of the War Department a statement of the Adjutant General of Massachusetts that you are the mother of five sons who have died gloriously on the field of battle.

I feel how weak and fruitless must be any word of mine which should attempt to beguile you from the grief of a loss so overwhelming. But I cannot refrain from tendering to you the consolation that may be found in the thanks of the Republic they died to save.

I pray that our Heavenly Father may assuage the anguish of your bereavement and leave you only the cherished memory of the loved and lost, and the solemn pride that must be yours to have laid so costly a sacrifice upon the altar of freedom.

Yours, very sincerely and respectfully, 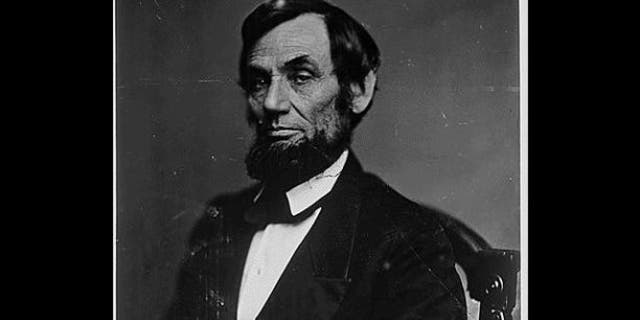 President Abraham Lincoln reportedly penned his condolences to Mrs. Bixby for the loss of her five sons during the Civil War on Nov. 21, 1864. But the letter is not without controversy.
(AP)

The letter was printed and distributed by the Boston Evening Transcript.

It was soon cherished as “one of the best letters written in the history of the English language,” according to a Time report.

Among the praises it received: American poet and biographer Carl Sandburg called it “a piece of the American Bible” that “more darkly than the Gettysburg speech … wove its awful implication that human freedom so often was paid for with agony.”

But the letter is not without controversy.

The original copy was allegedly destroyed by either the newspaper’s editor or by Mrs. Bixby herself, who — as a sympathizer of the Confederacy — may have disliked Lincoln.

Bixby’s great-grandchildren recalled this as Bixby’s political stance, according to the New England Historical Society. 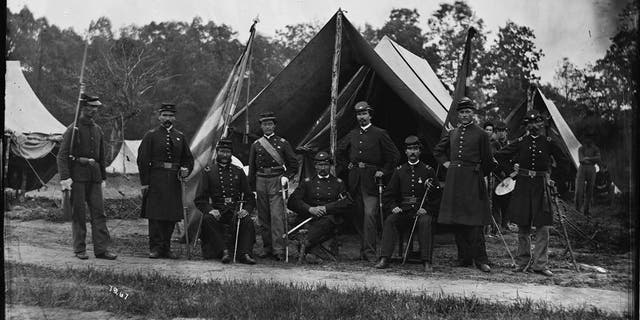 Field and staff officers of the 69th Pennsylvania Infantry, a volunteer regiment in the Union army, at Gettysburg, Pennsylvania, during the American Civil War, June 1865.
(William Morris Smith/Library of Congress/Getty Images)

“I was advised by my father that my great-grandmother was an ardent southern sympathizer,” Bixby’s great-grandson said, according to the society.

“And when she received the letter, she destroyed it in anger … shortly after receipt without realizing its value.”

It was later revealed that Bixby lost not five but two of her sons, Charles and Oliver, in battle, according to the New England Historical Society.

Of the three others, the third son, Edward, reportedly deserted the Army; the fourth son, George, either deserted the Army or died as a prisoner of war; and the fifth son, Henry, was honorably discharged.

Whether Lincoln himself wrote the letter or not has also been debated. 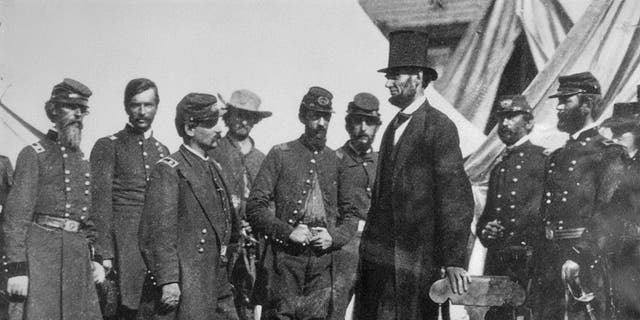 President Abraham Lincoln with General George B. McClellan at his headquarters at Antietam, October 3, 1862.
(Getty Images)

Many scholars believe that one of Lincoln’s White House secretaries, John Hay, was the one who put pen to paper.

The letter’s popularity, however, was revived by the 1998 Steven Spielberg film “Saving Private Ryan,” which the letter reportedly inspired.

Actor Harve Presnell, who played Gen. Marshall in the film, recites the letter in an emotional cinematic moment.

The letter has continued to be used to honor those who have sacrificed their lives for America.

A passage from the letter — “the solemn pride that must be yours to have laid so costly a sacrifice upon the altar of freedom” — is etched into stone at the base of the National Memorial Cemetery of the Pacific in Hawaii.

On the 10th anniversary of the September 11 terrorist attacks, former President George W. Bush read the Bixby Letter during a memorial service at Ground Zero.

In 2017, a team of forensic linguistics researchers used a tracing method that revealed 90% of the letter was identified as Hay’s writing, according to Time.