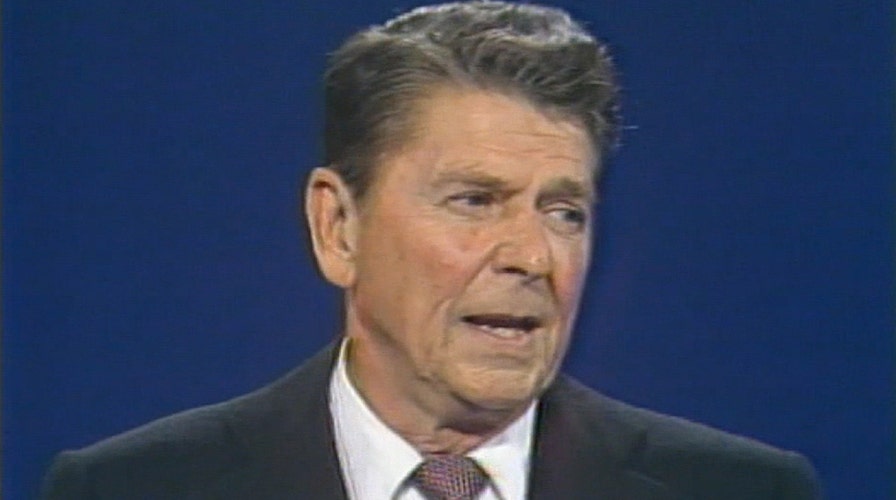 Ronald Reagan on the American Spirit during his 1980 convention speech

Conservative icon Ronald Reagan, the former Hollywood leading man and California governor who outwitted the American political elite to reach the Oval Office, was elected president of the United States on this day in history, Nov. 4, 1980.

His “triumph capped the rise of the new right/conservative wing of the Republican Party and ushered in a new era of governing,” writes the Ronald Reagan Presidential Library and Museum.

“Reagan served as arguably the first true conservativeU.S.president in over 50 years. [He] advanced domestic policies that featured a lessening of federal government responsibility in solving social problems, reducing restrictions on business, and implementing tax cuts.”

ON THIS DAY IN HISTORY, NOV. 3, 1956, ‘THE WIZARD OF OZ’ DEBUTS ON TV, ELEVATES OLD FILM TO AMERICAN CLASSIC

He also implemented a muscular foreign policy that, many historians argue, led to the downfall of the Soviet Union and largely ended communism as a viable political philosophy on the global stage.

Reagan easily defeated the sitting president, Democrat Jimmy Carter, who oversaw what he himself called the American “malaise” in an infamously dour July 1979 speech. 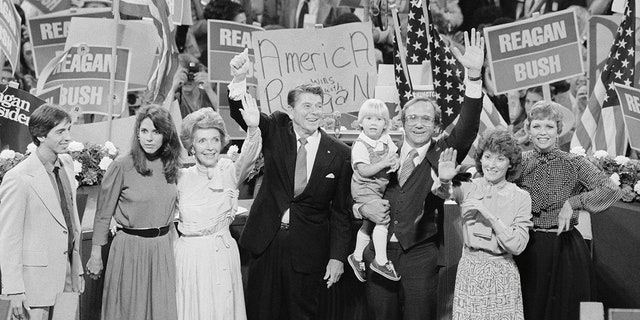 The Republican challenger won 44 states and 489 electoral votes to just six and 49, respectively, for Carter.

Reagan proved one of the most popular presidents in history, winning 49 of 50 states in his re-election bid in 1984.

He ran on a now-famous “It’s Morning Again in America” ad campaign after helping lift the U.S. out of the abyss of the Carter years.

His Democrat challenger in 1984, Walter Mondale, managed to win only his home state of Minnesota.

His buoyant, pro-American optimism proved appealing following the nation’s crisis of confidence that arose from the Vietnam War. 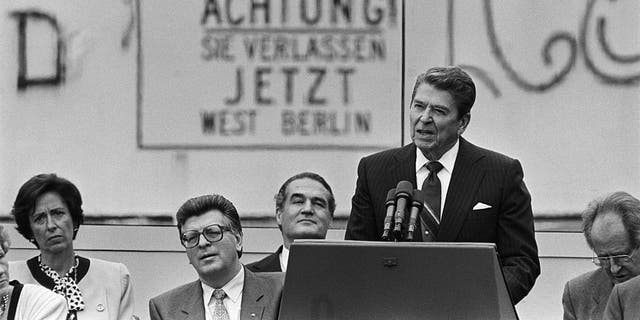 Ronald Reagan, making his famous challenge to Mikhail Gorbachev to "tear down" the Berlin Wall, on June 12, 1987.
(Getty Images)

“Voters troubled by inflation and by the year-long confinement of Americans in Iran swept the Republican ticket into office,” reports WhiteHouse.gov in its biography of the 40th president.

The Iran hostage crisis weighed heavily on the minds of Americans as they entered voting booths in November 1980.

“Reagan served as arguably the first true conservative U.S. president in over 50 years.”

The U.S. Embassy in Tehran was overrun and 52 American diplomats and civilians were taken captive exactly one year earlier, on Nov. 4, 1979.

The hostage crisis proved symbolic of the weakness of the Carter administration.

Eight American service members were killed in an aborted hostage rescue attempt in April 1980, further cementing the crisis as a failure of presidential leadership.

The hostages were released on Jan. 20, 1981, the same day Reagan was inaugurated.

The stroke of good news that coincided with Reagan’s ascension to the Oval Office inspired hopes of better days ahead under the jovial former actor. 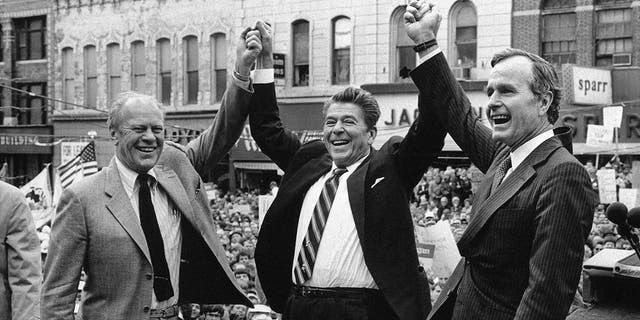 He inherited a horrific economy, plus staggering interest relates and “stagflation” — a rare combination of a stagnant economy and inflationary prices for consumer goods and services.

“Reagan’s economic legacy is mixed. On the one hand, tax reduction and a tightening of interest rates by the Federal Reserve led to a record period of peacetime economic growth,” notes the Miller Center at the University of Virginia, a think tank of presidential scholarship. 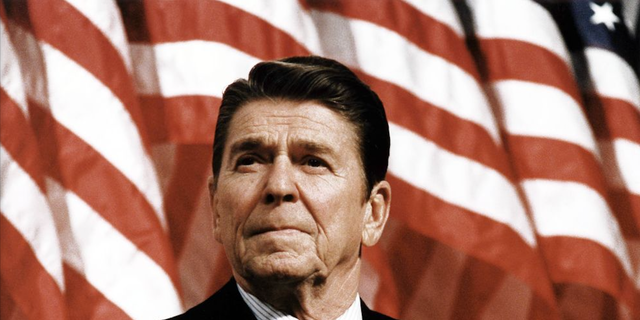 “On the other, this growth was accompanied by record growth in the national debt, the federal budget deficit, and the trade deficit.”

More definitively successful, Reagan tackled the existential threat posed by the Soviet Union and the spread of communism with blunt force.

“He set out to enlarge freedom the world over — and he succeeded.” — Margaret Thatcher

He brazenly proclaimed the Soviet Union the “Evil Empire” in 1983 and, in a June 12, 1987, speech delivered at Brandenburg Gate in divided Berlin, Reagan taunted Mikhail Gorbachev on the world stage.

He dared the Soviet leader by name to “tear down this wall! — a reference to the Berlin Wall that divided communist East Berlin from democratic West Berlin.

Reagan also proposed the Strategic Defense Initiative — dubbed Star Wars by critics. Though never enacted, it had the effect of helping force the Soviet Union to spend itself into failure. 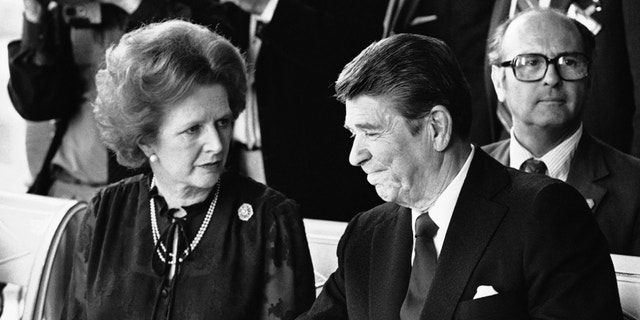 The Berlin Wall tumbled on Nov. 9, 1989, 10 months after Reagan ceded the office to Vice President Bush following the 1988 election.

The Soviet Union collapsed in December 1991, freeing hundreds of millions of people from the shackles of the Iron Curtain.

Reagan “achieved the most difficult of all political tasks: changing attitudes and perceptions about what is possible,” wrote his political ally and U.K. Prime Minister Margaret Thatcher.

“From the strong fortress of his convictions, he set out to enlarge freedom the world over at a time when freedom was in retreat — and he succeeded.”