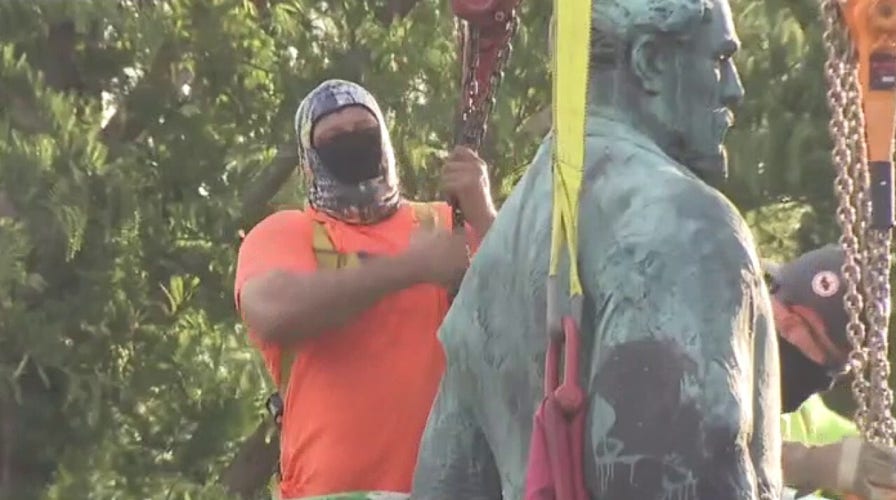 U.S. Army Captain Meriwether Lewis, 2nd Lt. William Clark and their Corps of Discovery returned to St. Louis to a hero’s welcome after their epic journey to the Pacific Ocean on this day in history, Sept. 23, 1806.

“We were met by all the village and received a hearty welcome from its inhabitants,” wrote Clark as their expedition returned to the Gateway to the West.

“We Suffered the party to fire off their pieces as a salute to the town.”

ON THIS DAY IN HISTORY, SEPT. 22, 1862, ABRAHAM LINCOLN PROCLAIMS SLAVES WILL SOON BE ‘FOREVER FREE’

“What happened to the Corps is a great story, brimming with energy and full of forward motion,” enthused historian James P. Ronda in a 2003 retrospective in Smithsonian Magazine.

“In extraordinary settings, a remarkable cast of characters encountered adversity of epic proportions and struggled through one adventure after another.” 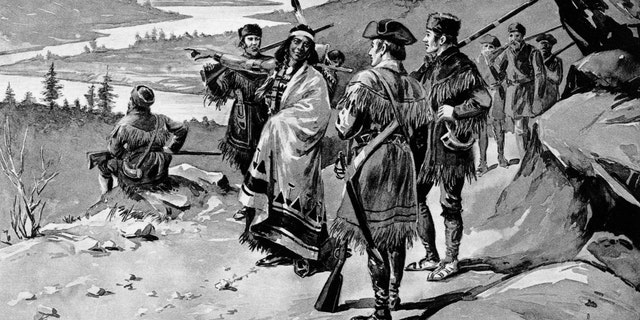 Among the multicultural band of explorers: Clark’s slave, York, whose skin color shocked natives who had never seen a black person before; celebrated Shoshone native Sacagawea; and her French Canadian-Native American son Jean-Baptiste Charbonneau, born on the journey in present-day North Dakota in 1805.

Clark cared for the boy after Sacagawea died in 1812.

The expedition took the Corps through what was then the forbidden North American wilderness, unexplored by Europeans, largely unmapped for posterity by humans and inhabited by flora, fauna and native tribes unknown to the outside world.

“What happened to the Corps is a great story, brimming with energy and full of forward motion.” — Smithsonian Magazine

Among the curiosities they encountered and recorded to the amazement of European Americans were 178 plants, 122 animals — including grizzly bears — and the indigenous Clatsop people in what’s now Oregon, one of many “Flathead” tribes of the Pacific Northwest. 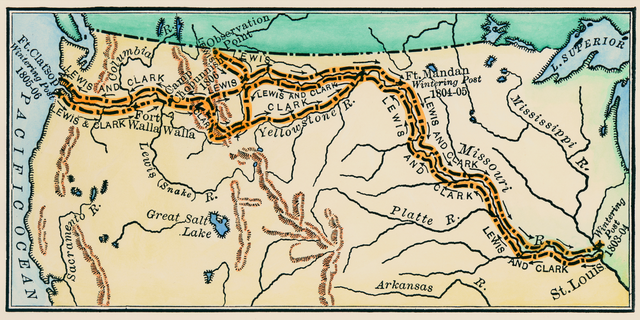 This map of the Northwestern U.S. depicts the route taken by Meriwether Lewis and William Clark on their first expedition from the Missouri River (near St. Louis, Missouri) to the mouth of the Columbia River (at the Pacific Ocean in Oregon) — and their return trip — 1804-1806. (Photo by Stock Montage/Getty Images)

“The most remarkable trait in their physiognomy,” wrote Lewis, “is the peculiar flatness and width of forehead, which they artificially obtain by compressing the head between two boards while in a state of infancy and from which it never afterward perfectly recovers … From the top of the head to the extremity of the nose is one straight line.”

The Corps was commissioned by President Thomas Jefferson while he was working to acquire the sprawling Louisiana Territory from France in 1803.

“Even before negotiations with France were finished, Jefferson asked Congress to finance an expedition to survey the lands of the so-called Louisiana Purchase and appointed Lewis as expedition commander,” according to History.com.

THE AMERICAN LEGION TURNS 103: A BRIEF HISTORY OF THE ORGANIZATION FORMED TO AID WWI VETERANS

Both Lewis and Clark kept detailed accounts of the journey.

They left for posterity a rich repository of insight into the natural landscape, the continent’s native inhabitants and their own daily battles for survival.

Remarkably, all but one member of the expedition, Sgt. Charles Floyd, lived to complete the journey. He died on Aug. 20, 1804, perhaps of a ruptured appendix, upon what’s now known as Floyd’s Bluff on the Missouri River in Sioux City, Iowa. Flathead Indians, 1861. Hoogst-áh-a (chief in blanket) and Lée-le (his wife flattening head of infant child). Artist George Catlin. Lewis and Clark were shocked to discover tribes of natives who flattened the heads of their children. (Photo by Heritage Art/Heritage Images via Getty Images)

“Lewis and Clark’s journals record for us not only a story of astonishing personal courage but also a powerful parable of trust within the human community,” writes editor Landon Y. Jones in his 2000 account of their diaries, “The Essential Lewis and Clark.”

“On one level, Lewis is the more sophisticated storyteller,” he wrote.

“Clark on the other hand is blunter, earthier and more to the point.”

“It is with pleasure that I announce to you the safe arrival of myself and party.” — Meriwether Lewis to President Jefferson

Among hundreds of other human insights in their records, the Corps of Discovery celebrated the young nation’s independence on July 4, 1805, with their remaining stock of spirits, music and dancing in what’s now Great Falls, Montana.

“The fiddle was played and they danced very merrily,” wrote Lewis of his team.

“They continued their mirth with songs and festive jokes and were extremely merry until late at night.”

“It is with pleasure that I announce to you the safe arrival of myself and party,” Lewis wrote to President Jefferson on the day of their return to St. Louis.

“In obedience to your orders we have penetrated the continent of North America to the Pacific Ocean, and sufficiently explored the interior of the country to affirm with confidence that we have discovered the most practicable rout which [does] exist across the continent by means of the navigable branches of the Missouri and Columbia Rivers.”