Ivanka Trump is trying to distance her company from her father, insisting the brand has nothing to do with the President-elect – in the wake of a series of controversies related to conflicts of interest and his divisive campaign.

The 35-year-old was recently blasted for promoting the $10,000 bracelet from her own collection that she wore on CBS’ 60 Minutes which she had worn during her family’s first interview since Donald Trump won the White House.

She had already been the target of an online campaign calling for a boycott of her brand after a tape surfaced in which her father bragged about sexually assaulting women.

So, in a blog post from her editorial team published on her website on Wednesday, her company vowed to stay out of politics.

Ivanka Trump is trying to distance her company from her father, insisting in a blog post that the brand has nothing to do with the President-elect Get the lace look in a Sandro midi skirt like Ivanka 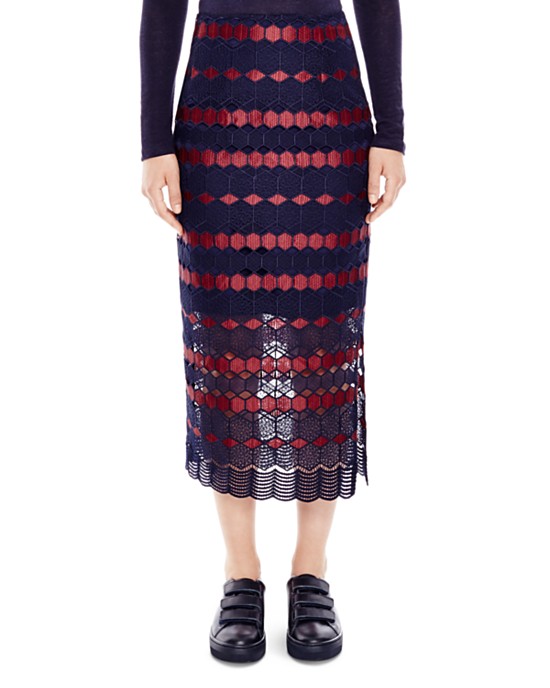 She's business savvy entrepreneur with a possible future in politics, but most of all Ivanka Trump is a doting mother who took her children Joseph and Arabella to school while dressed to the nines as always.

Ivanka donned a lace embroidered top by Sandro as well as a matching midi skirt and she tied the look together with a pair of lace-up pumps from her own fashion collection (buy below).

We love everything about this ensemble from the scalloped hemline to the slightly sheer fabric to the tiny diamond shaped cutouts.

Lucky for you the coordinated set is available at Bloomingdale's and it's on sale! So click right to nab the skirt then pick up the top in the edit below.

Then keep scrolling through because we've got plenty of alternative options including a lookalike skirt by Bar III at Macy's that's a steal at less than $70.

* PRICES MAY NOT BE AS ADVERTISED

However, it added that Ivanka now has a personal opportunity to advocate for women.

‘Our company’s message is not political – it never was and it never will be – however, Ivanka, personally, has an increased opportunity to advocate for woman and be a positive force for change.

‘As a private citizen, with full awareness of her heightened visibility, she will broaden her efforts to take a stance on issues of critical important to American women and families.’

Meanwhile, her eponymous company will continue ‘working to inspire and empower women to create the lives they want to live.’

However, Ivanka is far from a ‘private citizen’ now that she is a First Daughter as well as on her father’s presidential transition team along with her brothers Eric and Donald Jr – despite heading the supposed ‘blind trust’ of his assets while their father is in office.

In a blog post (above)  from her editorial team published on her website on Wednesday, her company vowed to stay out of politics

She helped craft his child care and maternity leave policy and was also part of her father’s campaign’s most important moments, including introducing him with a speech at the Republican National Convention.

Most recently, she and husband Jared Kushner – also on Trump’s transition team – sat in on the President-elect’s meeting with Japanese Prime Minister Shinzo Abe.

The blog post acknowledged that the company had received some complaints and vowed to take the feedback on board for the future.

‘We’ve been listening to the feedback we’ve received, both positive and not, and we’ve been taking it into consideration as we plan for the future.

It added: ‘Keep the comments coming.’

‘This is an unprecedented time for our company and we are being intentional in how we move forward, working hard to ensure we’re creating the best possible community for our readers.’

The 35-year-old was recently blasted for promoting the $10,000 bracelet from her own collection that she wore on CBS’ 60 Minutes which she had worn during her family’s first interview since Donald Trump won the White House (above)

It added that the Women Who Work initiative was launched in 2014 to become a ‘network of women supporting other women, and it has.’

‘We respect that we each have different points of view. Our goal from the beginning has been to be a community that’s inclusive of all.’

However, her father’s presidential campaign continued to alienate female voters – with attention called on misogynistic comments he has made in the past and during the campaign as well as the infamous Access Hollywood tape in which he boasted that he could ‘grab [women] by the p****.’

It led to one woman launching a campaign – dubbed #GrabYourWallet – to boycott Ivanka’s products in light of her unwillingness to speak out against her father.

The mother-of-three spoke out about the campaign for the first time last month, saying she had ‘nothing’ to say to the women boycotting her brand.

‘The beauty of America is that people can do what they like, but I’d prefer to talk to the millions, tens of millions of American women who are inspired by the brand,’ she said in an interview on Good Morning America in October.

‘The message that I’ve created – my advocacy of women, trying to empower them in all aspects of their life – started long before this presidential campaign did. I’ve never politicized that message.’

Ivanka then added: ‘People who are seeking to politicize it because they may disagree with the politics of my father, there’s nothing I can do to change that.’