94 years on, but there’s no mistaking that grin! Pictures reveal how the Queen is still adopting the same stance and mischievous smile she had as a toddler

With her hands clasped together, a slightly mischievous smile on her face and a string of pearls around her neck, it is a pose that many have come to expect from Britain’s longest-serving Monarch.

And today a newly revealed picture from a collection of rarely seen private family photographs – recently sold at auction – shows that Her Majesty even adopted the familiar stance as a two-year-old.

Her maturity at that age impressed Winston Churchill, who met her at Balmoral in September 1928. Writing to his wife Clementine, he described the young ‘Lilibet’ as ‘a character’, adding that: ‘She has an air of authority and reflectiveness astonishing in an infant.’ 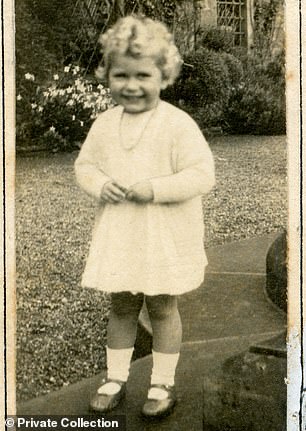 It is understood that the photographs were taken by Elizabeth’s father, Prince Albert, Duke of York – a gifted amateur photographer who came to the Throne as King George VI when his brother Edward VIII abdicated.

Like the Duchess of Cambridge, who takes portraits of her children to mark their birthdays, rather than using official photographers, the future King was able to capture his children at their most relaxed and happy.

The images of Elizabeth as a young girl were given to Beryl Poignand, former governess and lifelong friend of Albert’s wife, the Duchess of York – known to later generations as the Queen Mother.

Miss Poignand was also trusted to write the book The Story of Princess Elizabeth, under the pseudonym Anne Ring. It was published in 1930 when the future Queen was four.