Fellow inmates of Gonzalo Lopez allegedly helped the Texas fugitive escape a prison bus last month by causing distraction for guards, allowing to escape and go on to murder a family of five while on the run.

Lopez, who was serving a life sentence and had links to the Mexican Mafia, was killed in a shootout last Thursday with law enforcement after his escape, stabbing the bus driver and going on the run outside of San Antonio for the last three weeks.

During his time on the run he is believed to have stabbed to death 66-year-old Mark Collins and his four grandsons before stealing their truck.

On May 12, prior to escaping into a wooded area near Centerville, which is between Houston and Dallas, Lopez had told 16 other inmates on board the bus that ‘this is your opportunity,’ state Senator John Whitmire (TX-15) told KXXV 25 News.

He further said that the prisoners responded by ‘making a disturbance, singing and jumping up and down’ the bus to create a distraction for the guards on board the bus. 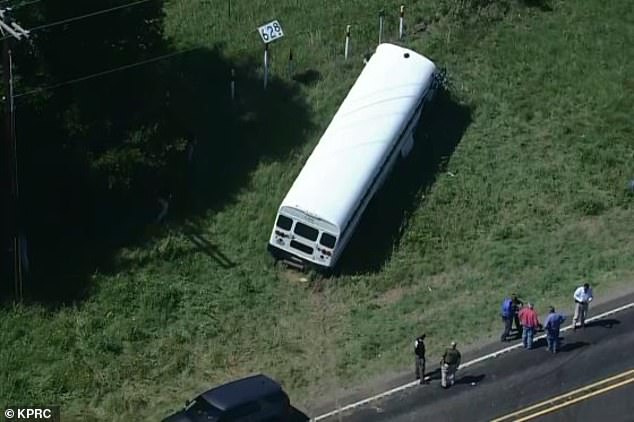 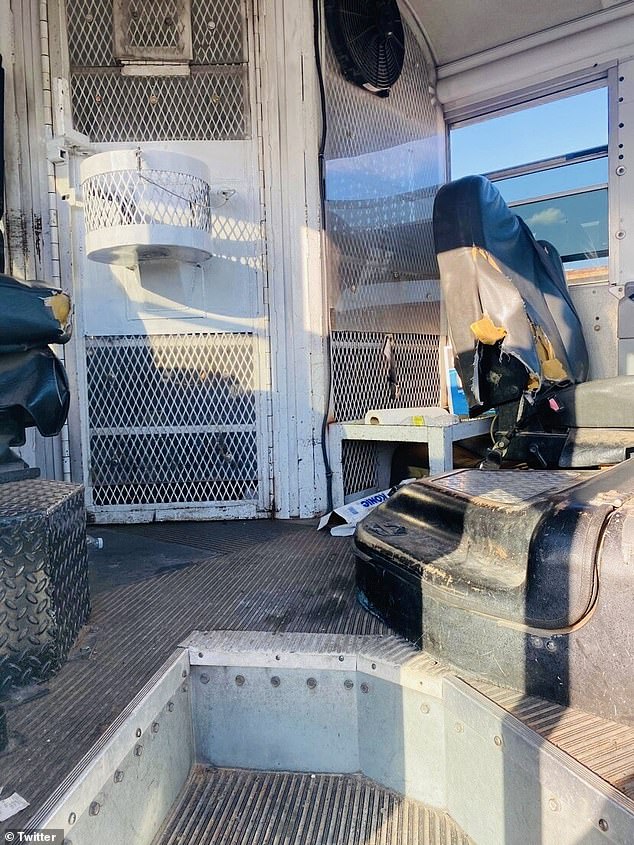 A photo of the cage inside the bus where escaped prisoner Gonzalo Lopez was transported. He reportedly used a key that he had on him to get out of the restricted area before fellow inmates helped him escape by ‘making a disturbance, singing and jumping up and down 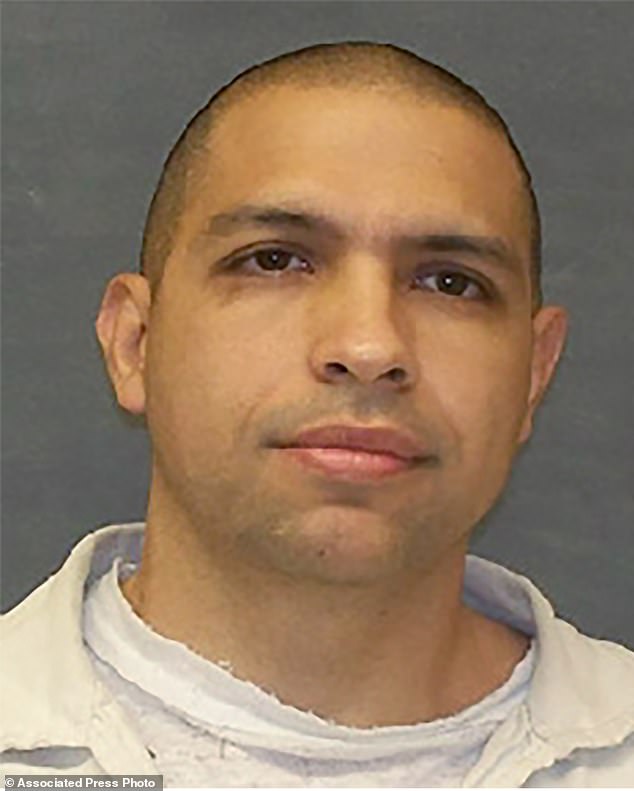 The 46-year-old fugitive then broke free from his restraints and from a caged area of the bus with a key that he had on him. Lopez was also carrying a knife, Whitmire said.

‘Same key for both, I understand,’ the Dean of the Texas Senate, who is also the state’s longest senator told News 25. The key has yet to be found, the local news outlet added.

‘Lopez was the worst of the worst,’ and there were ‘huge mistakes made,’ Whitmire told News 25.

After stabbing the bus driver, a second officer at the rear of the bus then exited and approached Lopez, who got back on the bus and started driving down the road.

The officers fired at Lopez and disabled the bus by shooting the rear tire, the department said. The bus then traveled a short distance before leaving the roadway, where Lopez got out and ran into the woods. 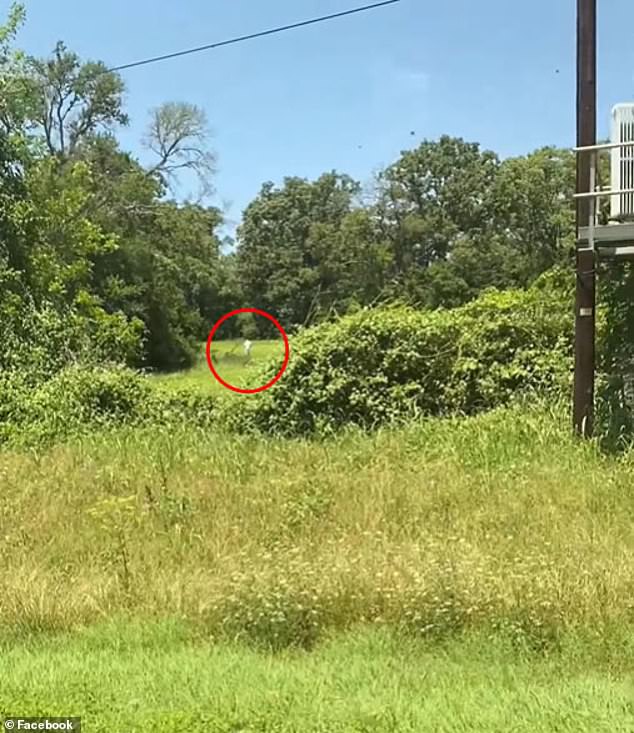 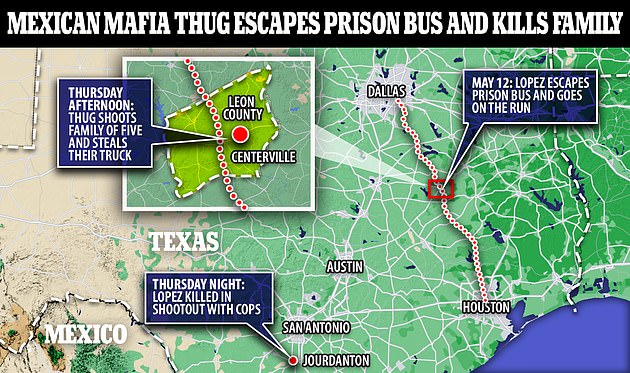 Lopez had been the subject of an intensive search since his escape. He was shot dead by officers in Jourdantown, Texas, on June 2 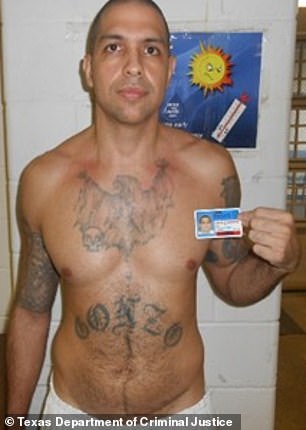 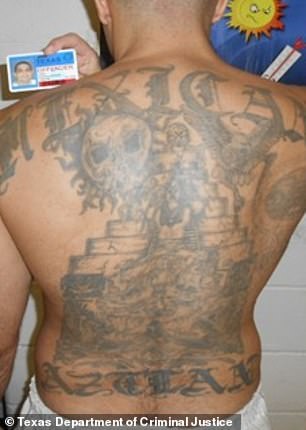 Investigators say Lopez stole an AR-15-style rifle and a pistol from the family’s ranch near Centerville, as well as a truck that he drove about 220 miles (350 kilometers) to Atascosa County, south of San Antonio, where the shooting happened later in the same day of the murders.

During a service Sunday at the family’s church in Houston, Glen Collins, Mark Collins’ brother, told the Associated Press that his faith was helping him get through this difficult time.

‘The agency is conducting an internal Serious Incident Review and also intends to bring in an outside firm to conduct an independent review to identify factors that may have led to the escape of (Gonzalo) Lopez,’ the Texas Department of Criminal Justice said in a statement Monday. No timeline was given for how long the internal review would take to complete.

The agency said if it must transport an inmate for an emergency medical appointment or for release, it will have more security.

Such additional security measures were in place when a van that was transporting an inmate from a hospital to a prison in East Texas collided with another vehicle early Tuesday on a freeway north of Houston, according to the prison agency and The AP. Three guards were injured but were expected to survive. The inmate was in stable condition.

On any given day, authorities move about 2,000 inmates for various reasons, said Jason Clark, a Texas Department of Criminal Justice spokesman. According to the agency’s Fiscal Year 2020 Statistical Report, the most recently available such report, there were about 121,000 individuals in prisons, state jails and other facilities run by the Department of Criminal Justice.

‘We are reviewing our processes and determining how to reduce the need to move inmates,’ Clark said in an email. 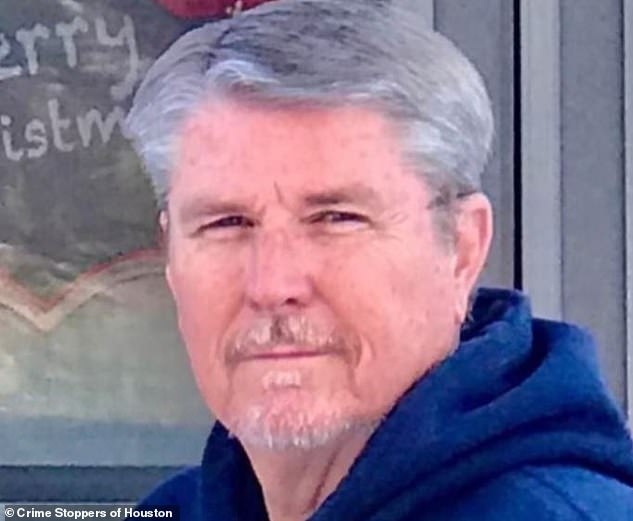 Mark Collins, 66, was murdered with his four grandchildren, allegedly by Lopez 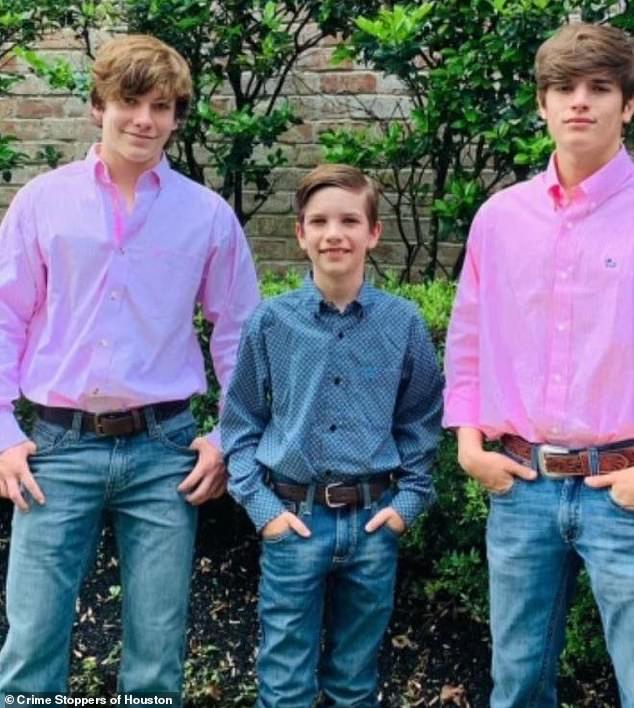 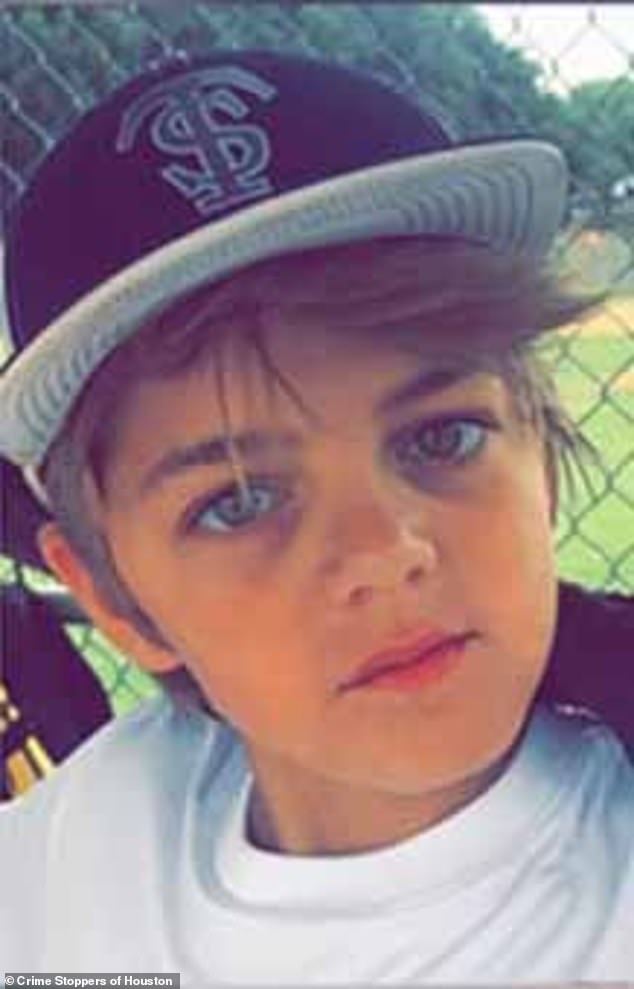 ‘While the investigation continues into exactly what happened with the recent escape and tragic murder of 5 members of the Collins family, we must act swiftly to ensure no other Texan is in danger of losing their life or being harmed by an escaped inmate being transported on Texas roads,’ Whitmire said in a written statement.

The committee will likely have a hearing sometime this summer to review what happened and prison system polices related to transporting inmates, said Lara Wendler, a spokeswoman for Whitmire.

The state senator has suggested the Department of Criminal Justice should keep violent offenders in prison units closer to medical facilities or should have medical teams visit the units.

Whitmire also called for additional security during inmate transports, including having another vehicle with armed officers follow close behind.

Lopez, who had killed on behalf of Mexican drug cartels, was initially being taken from a prison in Gatesville to one in Huntsville for a medical appointment on May 12.

In March 2005, Jose Guadalupe Ramirez, 37, was kidnapped from his home by two men, one of them being Lopez, who killed the victim with a pickaxe.

Lopez was later arrested and identified after one of the victim’s relatives recognized him, according to Valley Central.

After his arrest, Lopez confessed the location of Ramirez’s body to police. He also told them he was ordered to kill him for a drug cartel the victim owed money to. He was given a life-sentence for his role in the murder.

In 2004, Lopez was involved in an attempted murder of a deputy who was part of the Webb County Sheriff’s office.

He was convicted on Wednesday of attempted capital murder after several hours of deliberation and was handed another life-term behind bars, according to KGNS TV. 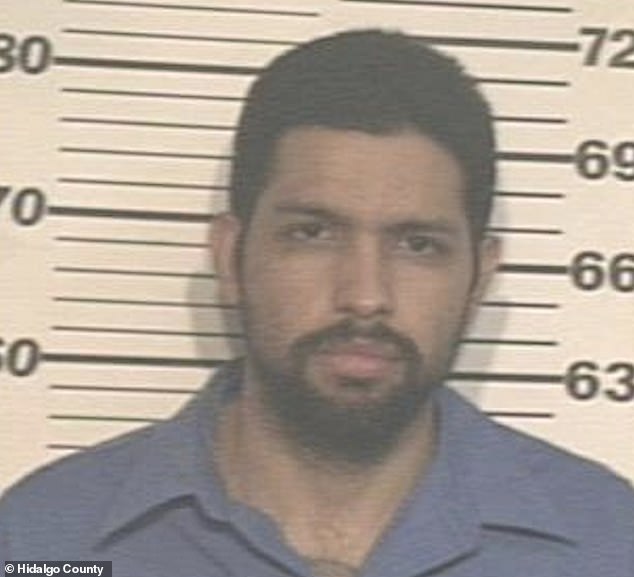 Lopez’s 2005 mugshot after the murder of Jose Guadalupe Ramirez. He was ordered to kill the indebted money by a drug cartel