A family affair! Princess Charlene stuns in an elegant blue jumpsuit as she joins Prince Albert and their twins Jacques and Gabriella, 7, at the Monaco Grand Prix

Princess Charlene of Monaco accompanied her husband Prince Albert and their seven-year-old twins Jacques and Gabriella to the Monaco Formula One Grand Prix today.

The 44-year-old royal looked chic in a figure-hugging blue jumpsuit custom designed by Terrence Bray, while Albert, 64, donned a black suit jacket with grey trousers and a white shirt.

The pair appeared in good spirits, with Charlene taking to Instagram earlier in the day to reveal her family’s excitement.

She shared a snap of their seven-year-olds Princess Gabriella and Prince Jacques, writing: ‘Focused on the win! Here’s to a great Grand Prix.’

While she used to be a regular at racing events, Charlene last attended the Grand Prix in 2019 – where she received a kiss on the cheek from Lewis Hamilton. This year she greeted F1 driver Charles Leclerc with a peck on the cheek.

Charlene recently returned to Monaco following a 10-month absence in her native South Africa and was seen last month with her children and husband for the first time since November after spending time in a treatment facility for ‘exhaustion’.

Today’s outing is the second time the royal couple have been seen in public together since French media claimed she is receiving £10million a year to appear by her husband’s side at public outings. 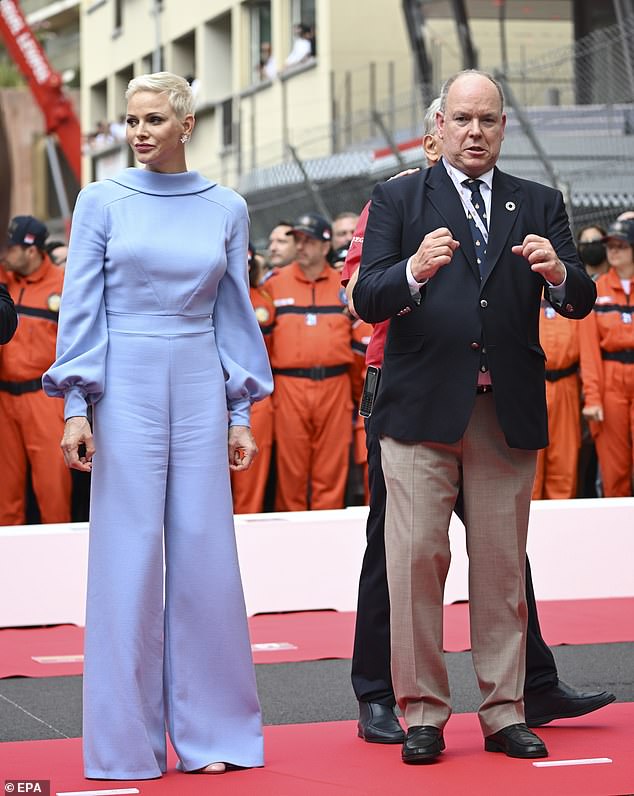 Princess Charlene of Monaco, 44, accompanied Prince Albert, 64, (pictured) to the Formula One Grand Prix of Monaco at the Circuit de Monaco 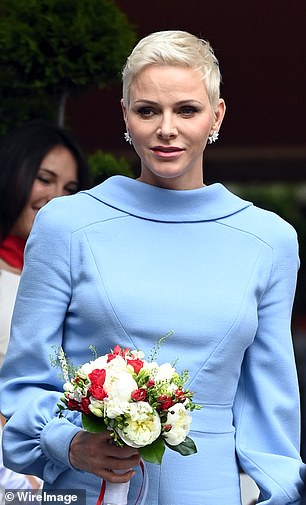 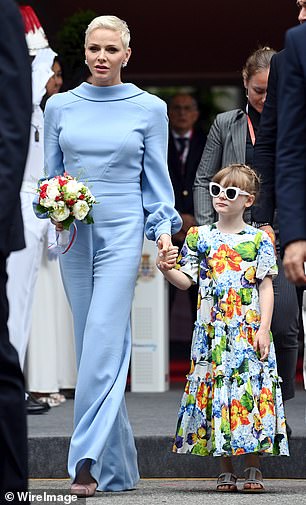 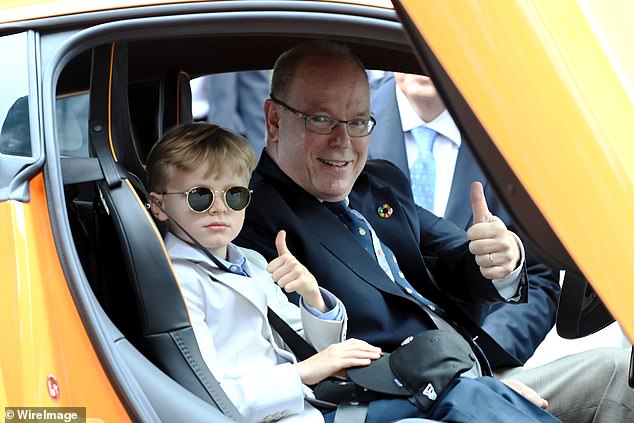 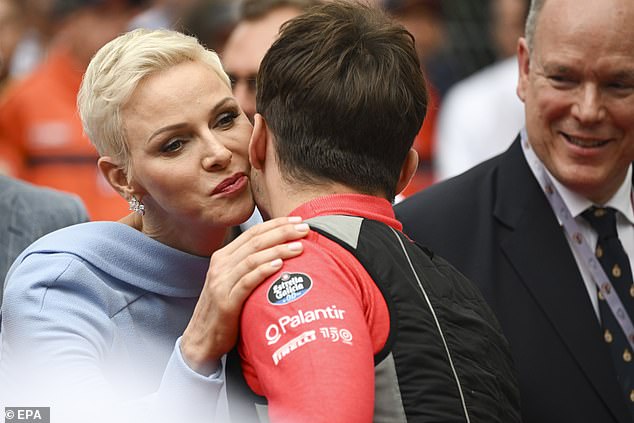 Charlene appeared in good spirits as she was greeted by Formula One driver Charles Leclerc, who she gave a kiss on the cheek 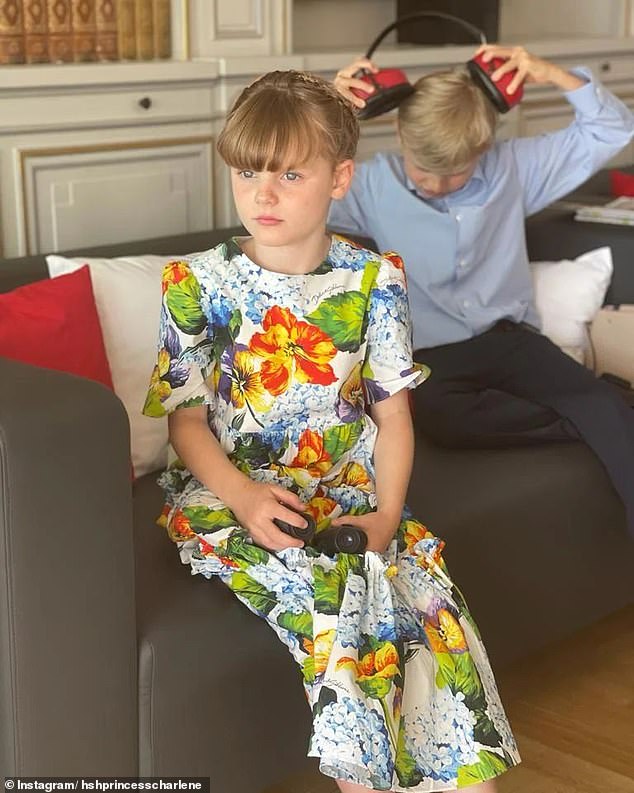 Posting on Instagram earlier, Charlene shared a photo of twins Princess Gabriella and  Prince Jacques (pictured) with a caption revealing their excitement 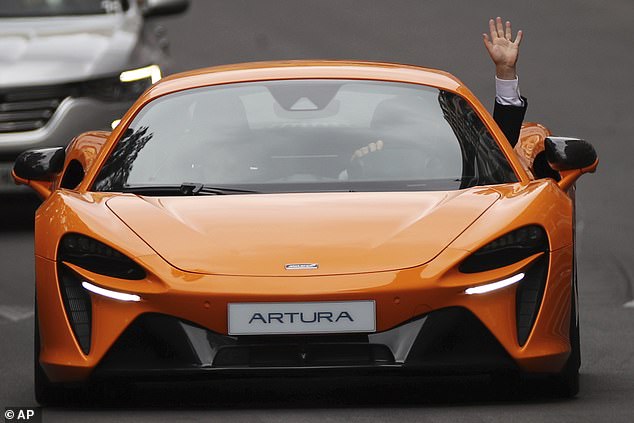 The mother-of-two beamed as she was greeted by Monaco Formula One driver Charles Leclerc of Scuderia Ferrai, who she gave a kiss on the cheek ahead of the races.

Princess Charlene met Prince Albert in 2000 during a swimming competition in Monaco and the pair married in 2011, before welcoming twins Gabriella and Jacques in 2014.

Yesterday, the couple walked side-by-side without holding hands, as they made their first public appearance together since French media claimed Charlene is receiving £10million a year to appear by her husband’s side at public engagements. 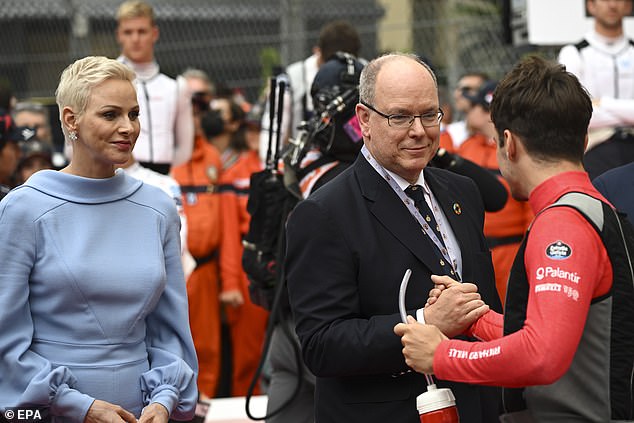 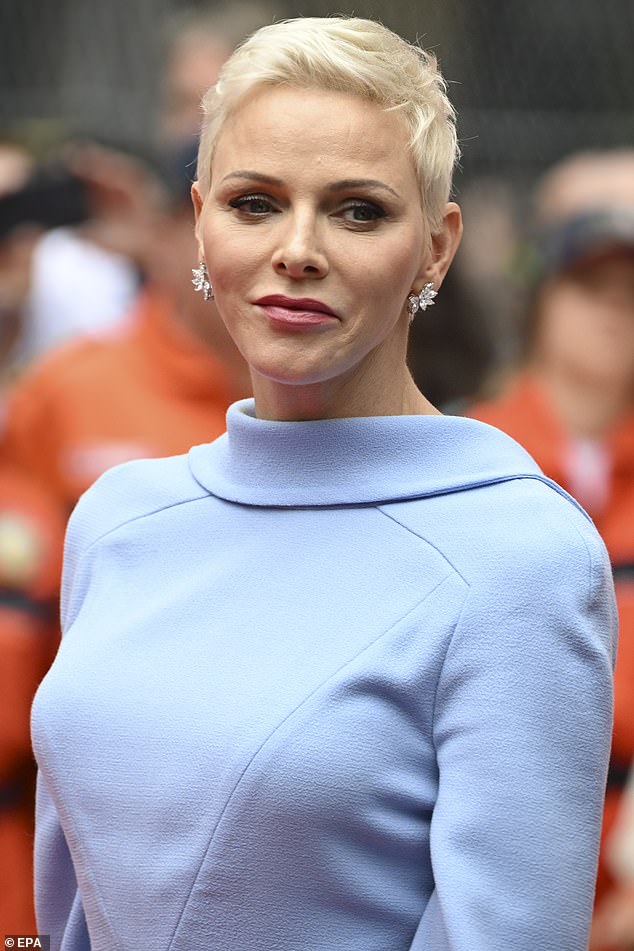 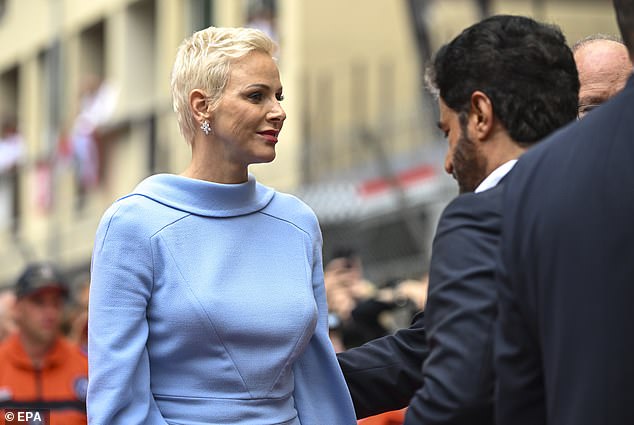 Princess Charlene use to be a regular at racing events, however until this weekend she hadn’t attended the Grand Prix since 2019 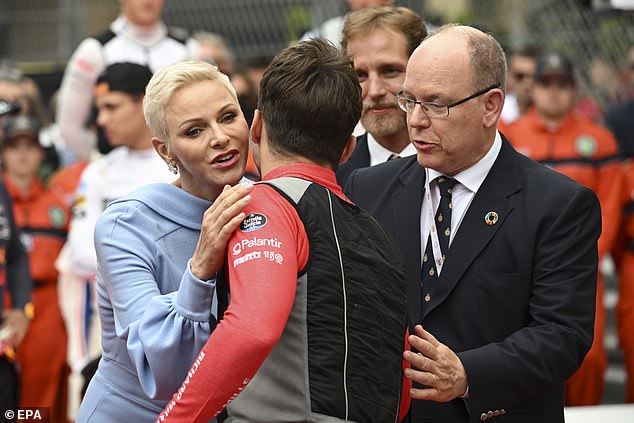 While she use to be a regular at racing events, Charlene last attended the Grand Prix in 2019 – where she received a kiss on the cheek from Lewis Hamilton.

She has rarely been seen with Albert since she spent some 10 months in South Africa last year. The mother-of-two contracted a serious sinus infection on a charity trip, which left her hospitalised and delayed her return to Monaco.

Charlene returned home in November, but left almost immediately for Switzerland to receive treatment for ‘exhaustion’.

Since last month, the mother-of-two has been making a gradual return to public life. Charlene joined her daughter Gabrielle, who is second in line to the Monégasque throne, earlier this week at the Monte Carlo Fashion Awards.

She presented an award to Saudi designer Abdul Al-Romaizan on stage after he opened the fashion show and posed for photos alongside her daughter by a flower wall. 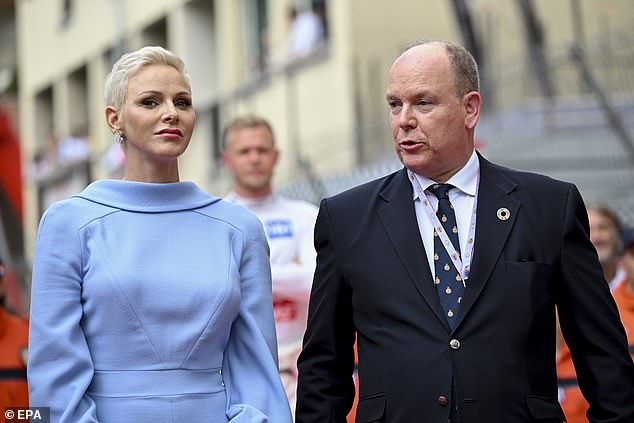 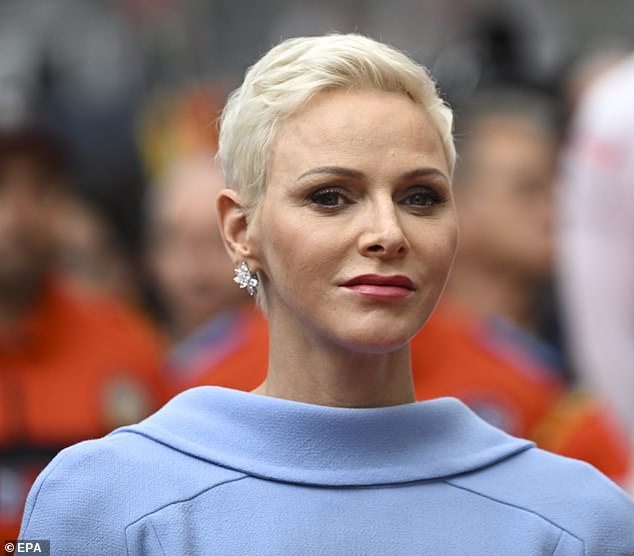 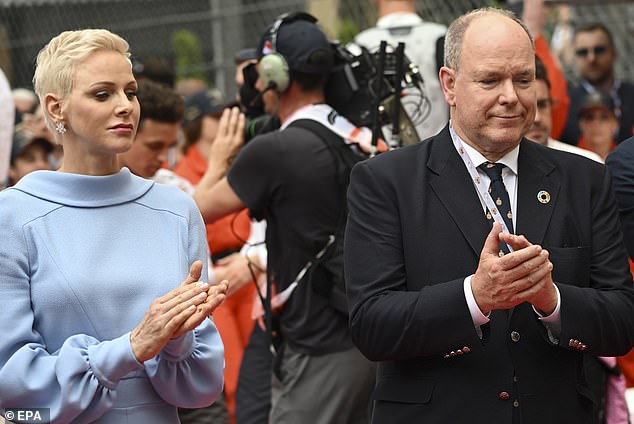 Charlene stepped out earlier this week at the Monte Carlo Fashion Awards with her daughter Gabriella, while Albert took Jacques to a charity football match 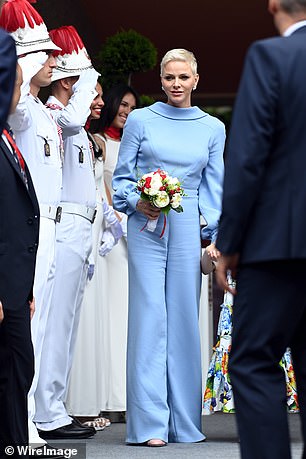 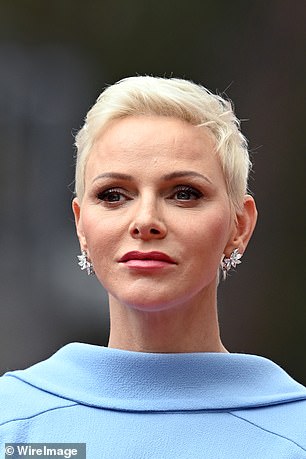 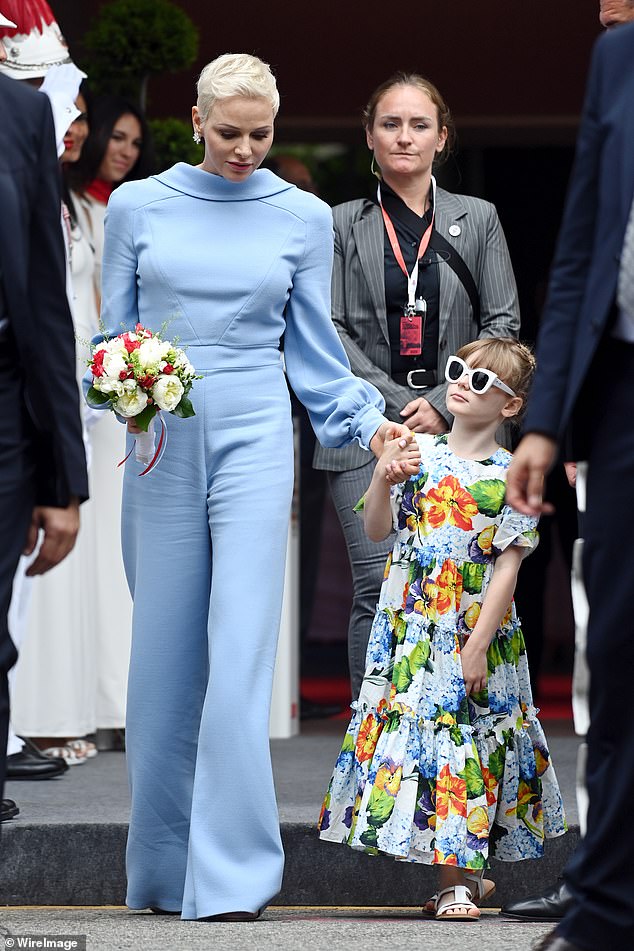 Last week, Charlene was nowhere to be seen when Prince Albert took his twins to DisneyLand Paris.

While just days before Charlene looked solemn as she appeared at an official engagement with her husband for the second consecutive week.

Leading French media reported the ruler of the tax haven Mediterranean principality was doing everything possible to keep Charlene ‘at his side at public events’.

‘But the Princess did not return at any price,’ magazine Voici reported. ‘She would have had her husband sign an ultra-confidential contract.’

The revelations were followed up by rival publication Paris Match Belgium, which writes: ‘Prince Albert would himself pay a tidy sum to the princess so that she appears at his side at public events.’

The Royal Palace in Monte Carlo refuses to discuss specific financial arrangements, but the principality pays out some £40m a year to cover the institution’s running costs.

January 27 – Charlene is pictured with Albert for the Sainte Devote Ceremony in Monaco.

March 18 – Charlene is pictured at the memorial for the late Zulu monarch, King Goodwill Zwelithini at the KwaKhethomthandayo Royal Palace in Nongoma, South Africa

April 2 – Charlene posts an Instagram picture of herself, Albert and their twins Jacques and Gabriella for Easter.

It is unknown where the image was taken.

May 8 – Albert, Jacques and Gabriella attend a Grand Prix event in Monaco without Charlene

May 10 – Albert attends Monaco Gala Awards in Monaco without Charlene

June 3 – New photos emerge of Charlene on her conservation trip

June 24 – Charlene’s foundation releases a statement saying the royal is unable to travel and is undergoing procedures for an ear, nose and throat infection

July 2 – Charlene and Albert mark their 10th anniversary separately. ‘This year will be the first time that I’m not with my husband on our anniversary in July, which is difficult, and it saddens me,’ Her Serene Highness Princess Charlene said in a statement.

July 3 – Albert appears with glamorous niece Charlotte Casiraghi at the 15th international Monte-Carlo Jumping event, which is part of the Longines Global Champions Tour of Monaco,

August 13 – Charlene undergoes a four-hour operation. The reason is not announced

September 2 – She is discharged, with a statement from the Palais Princier reading: ‘Her Highness is closely monitored by Her medical team who said that Her condition was not worrying’

November 8 – Charlene arrives back in Monaco. Prince Albert said within hours it became clear she was ‘unwell’

Following his return from the trip, Prince Albert holds an intervention with Charlene’s brothers and a sister-in-law in which Charlene ‘confirmed’ she would seek ‘real medically framed treatment’ outside of Monaco

January 25 – Charlene celebrates her birthday alone outside of Monaco

March 14 – The royal palace announced Charlene had returned to Monaco.

May 18 – Prince Albert takes twins to Disneyland without Charlene

May 28 – Charlene and Albert appear together at Monaco F1