Protesters destroyed Iranian police vehicles and sent morality offers running in the streets as the fifth night of protest rocked the country in the early hours of Thursday morning.

Dozens of Iranian cities were locked in the grips of deadly riots as women tore off their hijabs and took to the streets, burning the garments while marching for their rights to be seen publicly without the veil.

Women in Turkey protested outside the Iranian embassy by cutting off their hair and holding it above roaring crowds.

Kurdish and Lebanese women took part in a rally in the downtown district of the capital Beirut, while Iranians in New York rallied outside a United Nations conference to protest against the arrival of Iran‘s hardline president Ebrahim Raisi.

Female-led protests have shaken the country since the death of Mahsa Amini, a 22-year-old Kurdish woman who died after being arrested by the morality police for failing to wear her hijab ‘correctly’.

Authorities said earlier in September they would use facial recognition technology in public places to spot women who didn’t adhere to the stricter hijab laws, arresting those who didn’t comply. 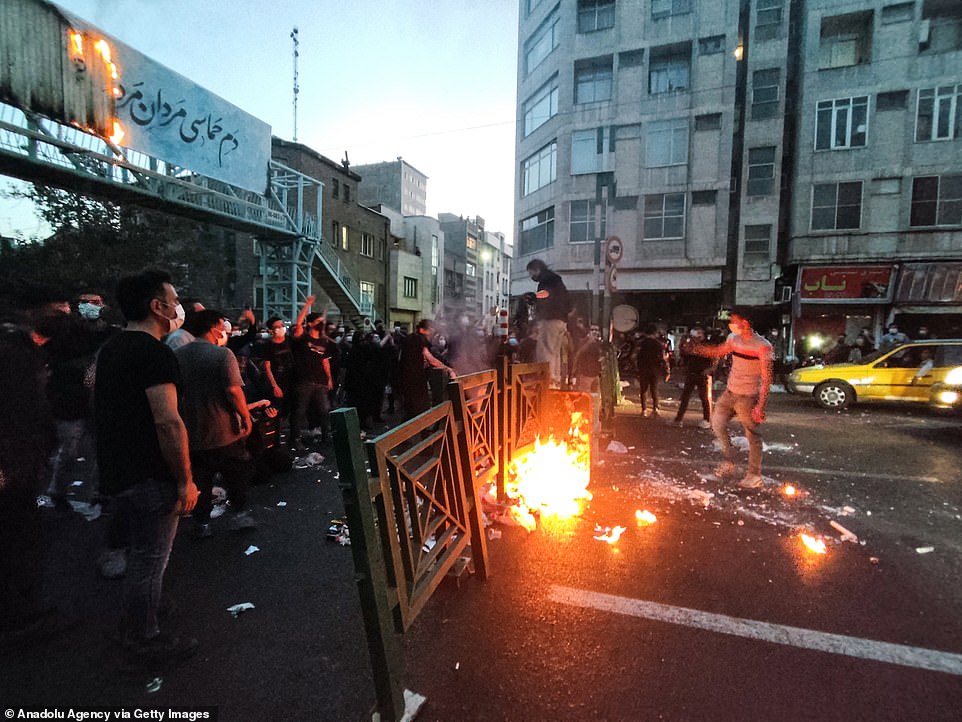 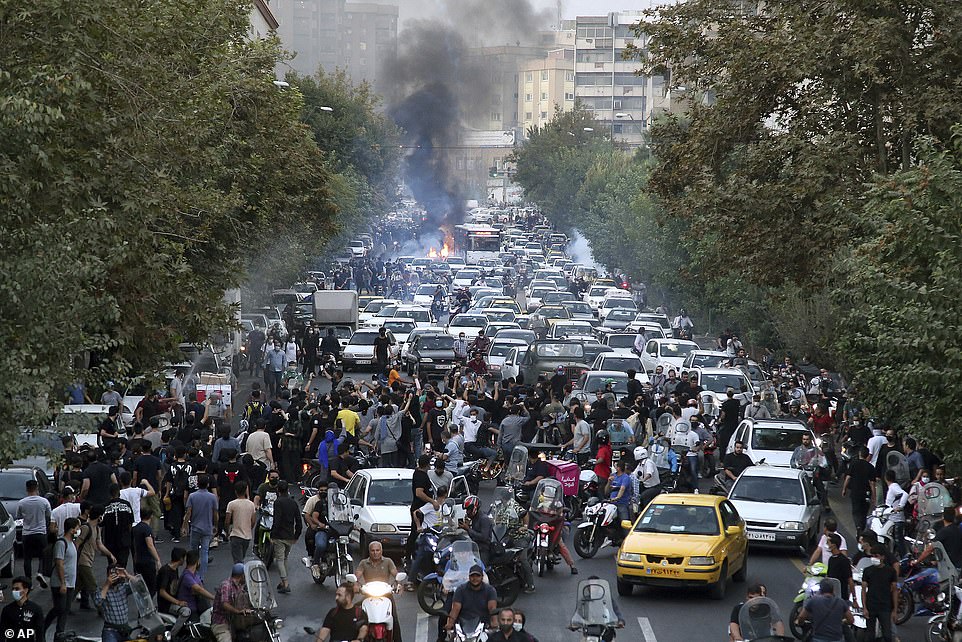 Protesters chant slogans during a protest over the death of a woman who was detained by the morality police, in Tehran 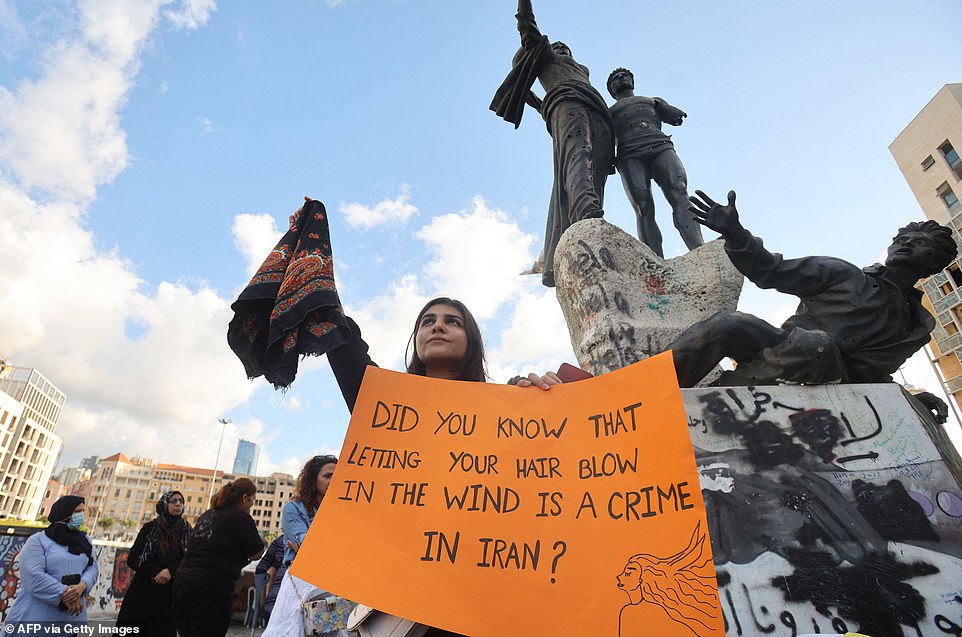 Kurdish and Lebanese women take part in a rally in the downtown district of the capital Beirut on Spetember 21, 2022, days after the Iranian authorities announced the death of Mahsa Amini 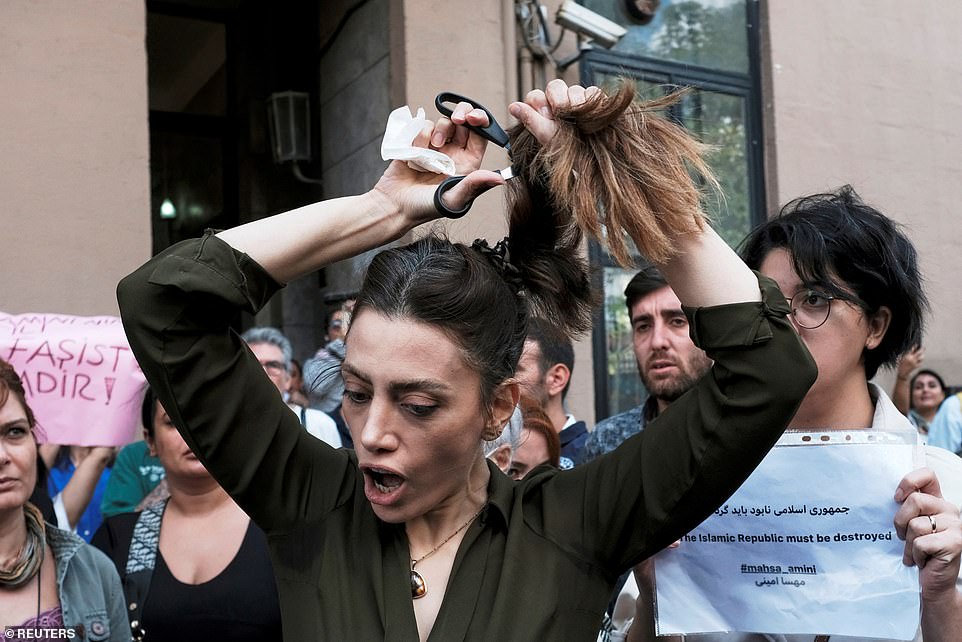 Nasibe Samsaei, an Iranian woman living in Turkey, cuts her hair during a protest following the death of Mahsa Amini, outside the Iranian consulate in Istanbul 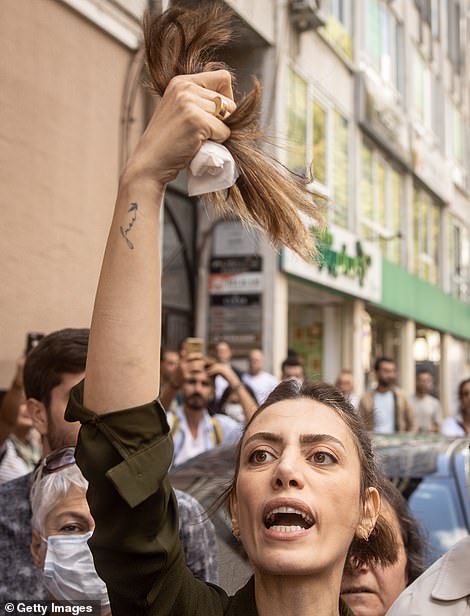 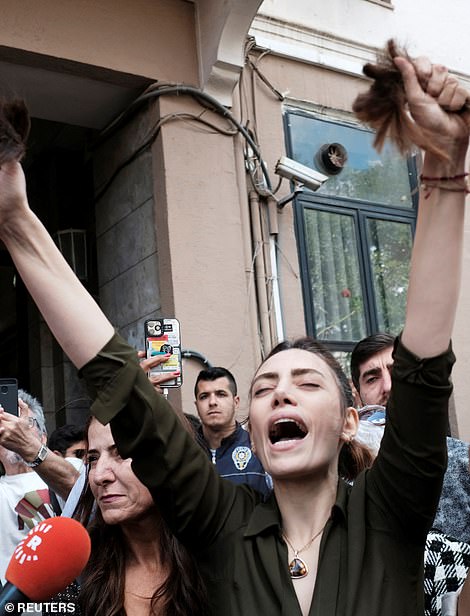 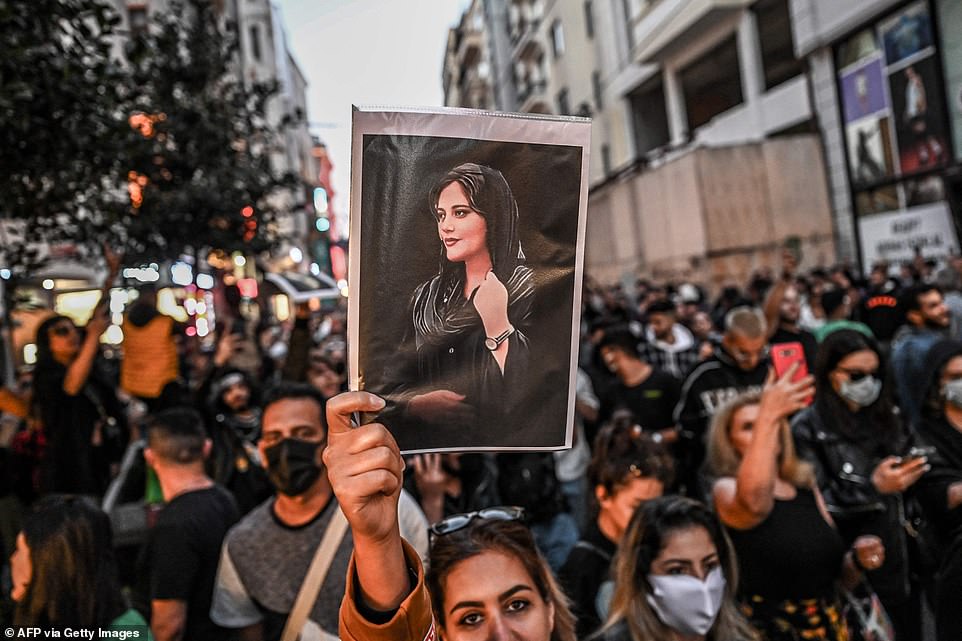 A protester holds a portrait of Mahsa Amini during a demonstration in support of Amini, a young Iranian woman who died after being arrested in Tehran by the Islamic Republic’s morality police, on Istiklal avenue in Istanbul

An elderly lady removed her veil to expose her grey hair and walked through the city of Rasht with her head uncovered, chanting ‘death to [supreme leader] Khamenei’ — risking life imprisonment for her defiance.

Lights flashing red and blue shrank back into the shadows as protesters advanced, with a crowd of hundreds overwhelming the regime’s forces. Elsewhere, police fled atop motorcycles as a wave of protesters charged.

Amini’s treatment during captivity led to her becoming comatose and dying following her arrest in Tehran, sparking demonstrations in multiple areas, the capital included.

President Raisi has promised an investigation after at-first denying the accusations, but it has done little to quell the protests.

The head of Tehran’s morality police, Ahmed Mirzaei, has reportedly been suspended after the death of the young woman, according to The Times of Israel.

Two people died on Tuesday in the western Iranian city of Kermanshah, the city’s prosecutor was quoted as saying on Wednesday by the semi-official Fars news agency. 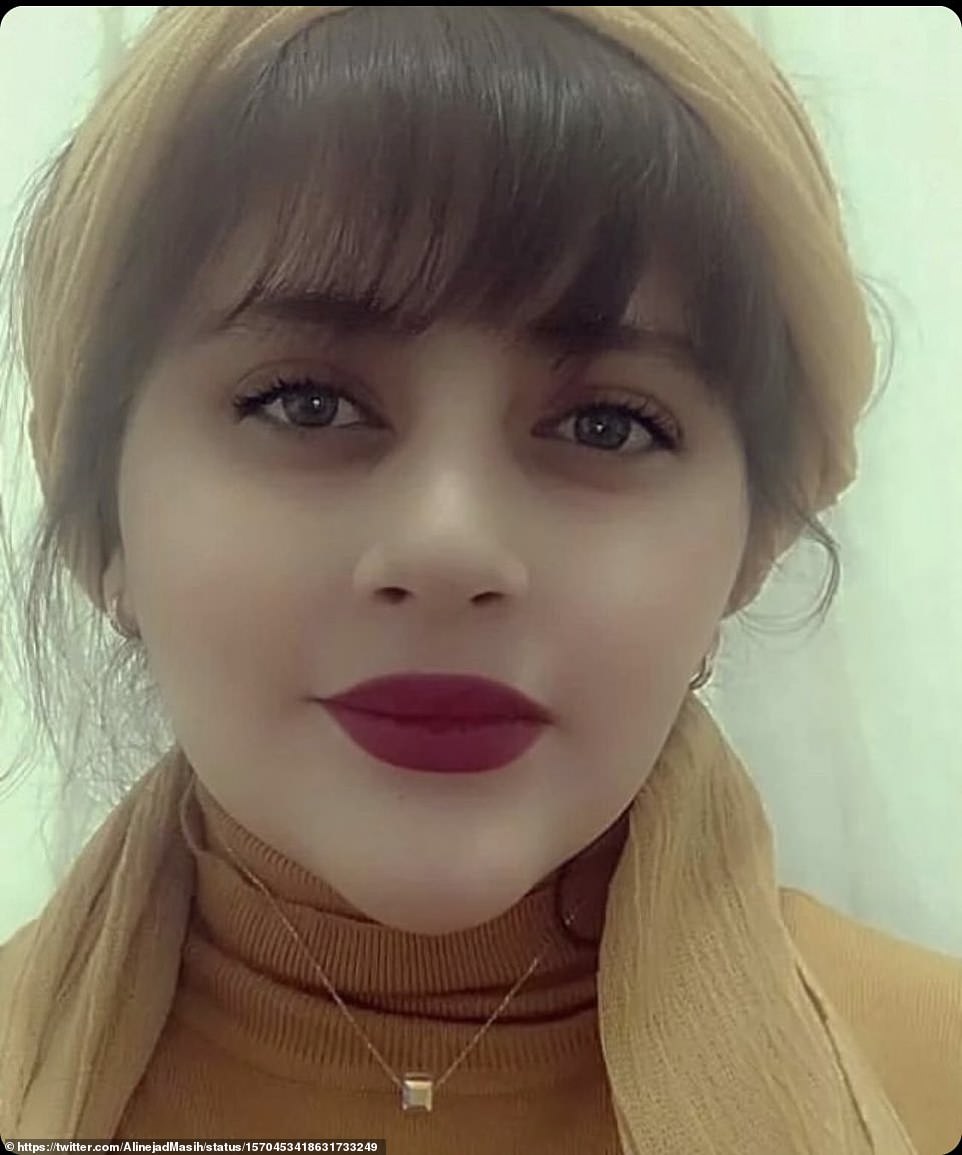 Mahsa Amini, 22, is pictured before her arrest and alleged torture by the Iranian authorities

‘Unfortunately, two people were murdered in yesterday’s riots in Kermanshah. We are certain this was done by anti-revolutionary elements because the victims were killed by weapons not used by the security apparatus,’ Shahram Karami said.

The prosecutor added 25 people, including protesters, security forces and bystanders, were injured during the protests.

The Anonymous hacktivist group said it hacked the official website of Iran’s president in support for the ongoing protests, according to Iran International.

In an another development, Elon Musk said he wants to be exempt from Iranian sanctions so he can provide the country with his Starlink satellite internet. People light a fire during a protest over the death of Mahsa Amini, in Tehran, Iran September 21 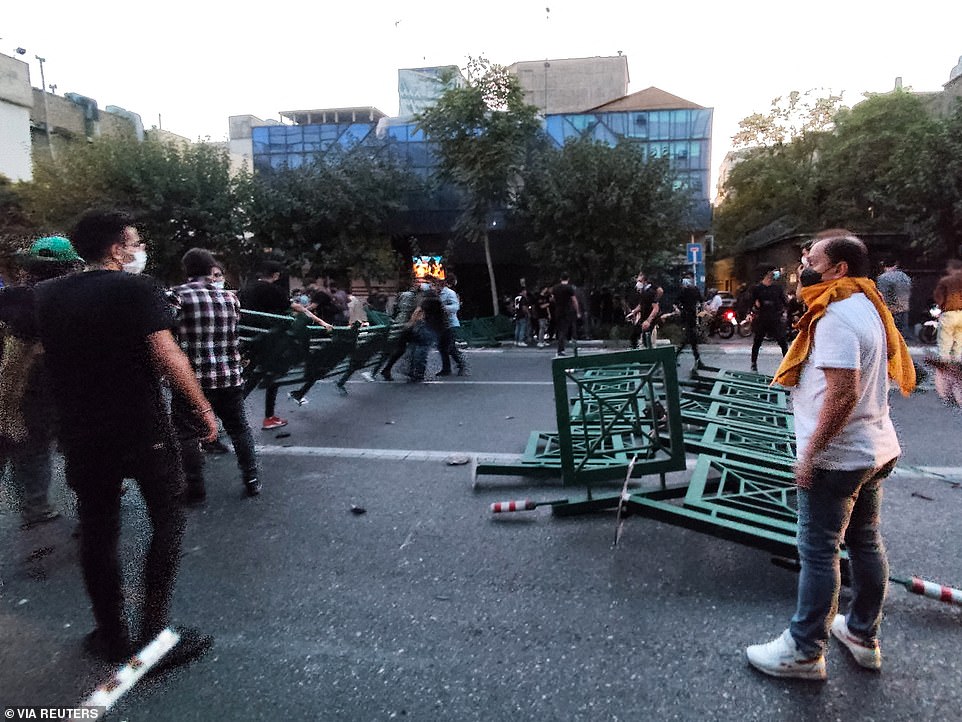 People attend a protest over the death of Mahsa Amini, a woman who died after being arrested by the Islamic republic’s ‘morality police’ in Tehran 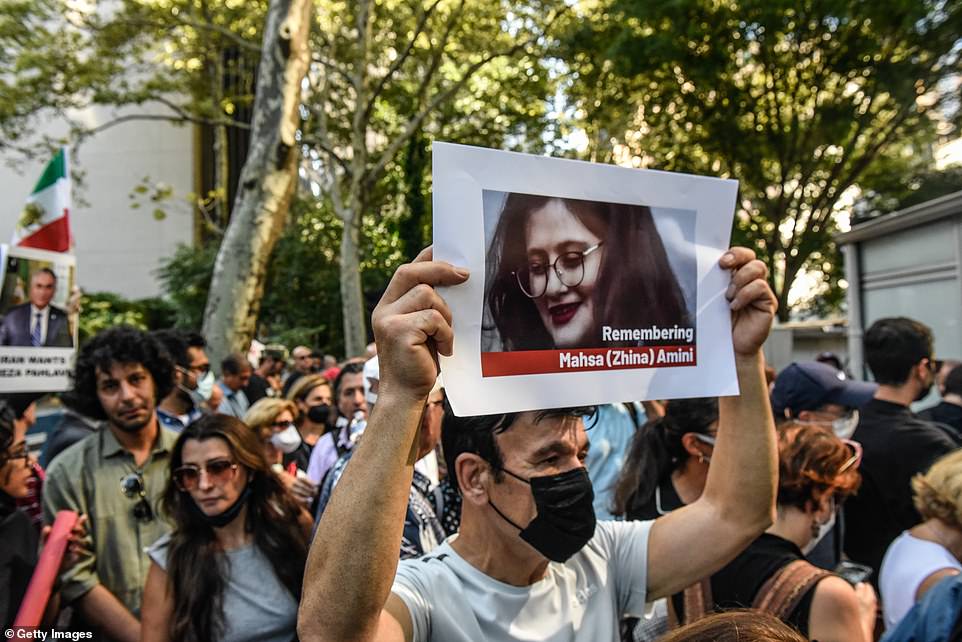 People participate in a protest against Iranian President Ebrahim Raisi outside of the United Nations on September 21, 2022 in New York City 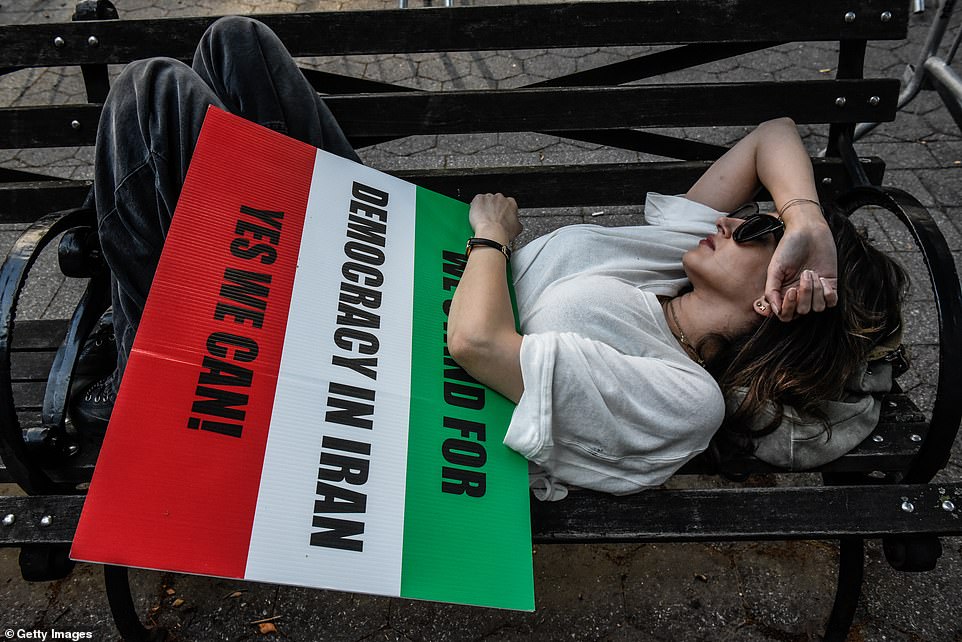 People participate in a protest against Iranian President Ebrahim Raisi outside of the United Nations on September 21, 2022 in New York City

A social media user going by the handle ‘erfan_kasrale’ tagged Musk in a tweet on Monday, saying: ‘I’m sure you won’t answer it Mr Musk, but is it technically possible to provide Starlink to Iranian people? It could be a game changer for the future.’

And Musk tweeted a reply on Tuesday, September 20, saying: ‘Starlink will ask for an exemption to Iranian sanctions in this regard.’

The protests are among the most serious in Iran since November 2019 unrest over fuel price rises.

It came as the United States and Iran butted horns on the return to he 2015 Iran nuclear deal on Wednesday, with the US president vowing Tehran would never get an atomic bomb.

Raisi struck a defiant tone at the United Nations General Assembly by decrying ‘double standards’ on human rights after the death of an Iranian woman in police custody that has sparked protests around Iran. 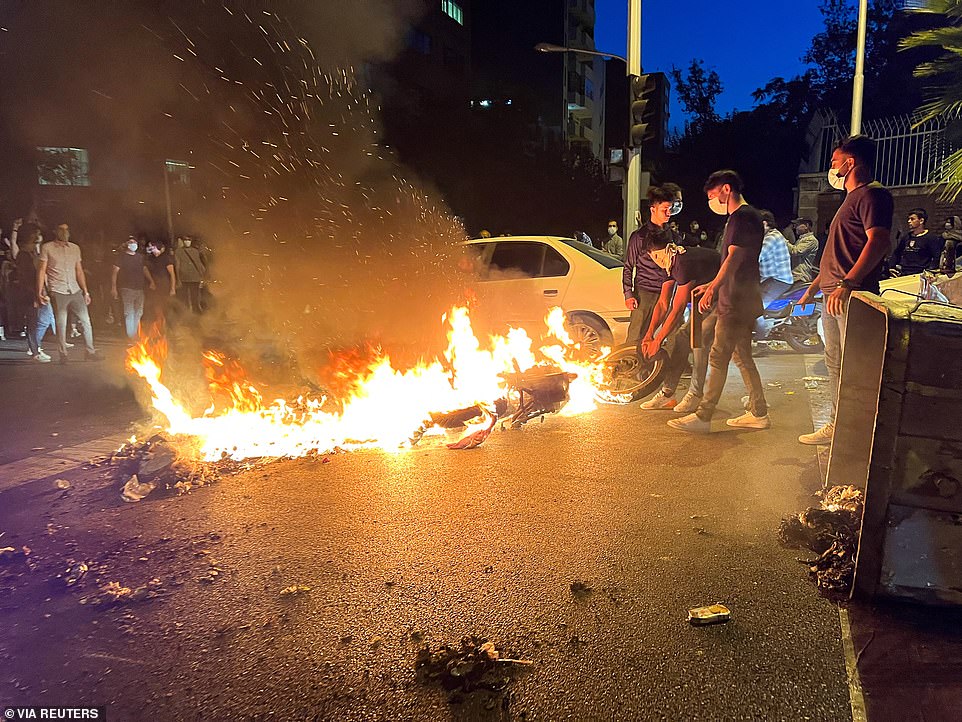 The president also said he wanted former US President Donald Trump to face trial for the killing of Iran’s Quds Force commander Qassem Soleimani,  holding up a picture of the general who was killed in a US drone strike in 2020.

‘These issues are not going to be wished away,’ agency chief Rafael Grossi told reporters at the United Nations, adding that he hoped to meet with Iranians in a few days.

‘The IAEA has limited access to Iran’s nuclear facilities… We are ready to re-engage with Iran’.