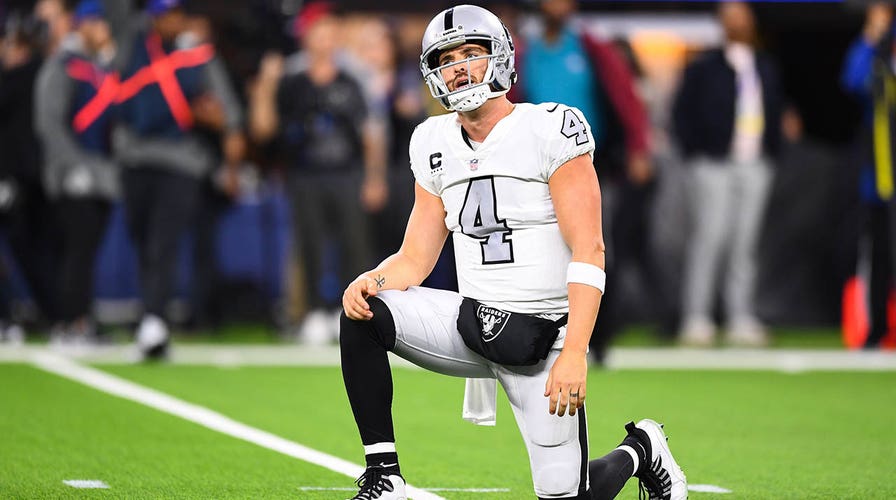 Quarterback Derek Carr’s future in Vegas is officially in limbo.

The Las Vegas Raiders announced Wednesday that Carr will be inactive for the final two games of their tumultuous season.

Jarrett Stidham will get the nod for the final two weeks, and he’ll make his first career NFL start Sunday with Chase Garbers backing him up. 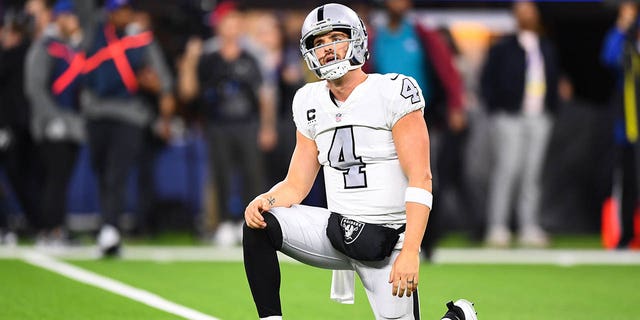 Carr had started 91 consecutive games, by far the longest active streak for a QB for the same team. He signed a three-year, $121.5 million extension in the offseason. This season, he leads the NFL with 14 interceptions thrown, including three Saturday night against the Steelers in Pittsburgh. His 14 picks tie his career-high from last season.

The Raiders went 10-7 last year and made the playoffs, falling to the eventual AFC champion Cincinnati Bengals in the AFC wild-card round. Seeking an opportunity to take the next step, they made a blockbuster trade to acquire Davante Adams, Carr’s former college teammate.

However, Carr took a big step back instead. His 60.8% completion percentage and 86.3 passer rating are his lowest marks since his rookie season, and his 3,522 passing yards are the third-lowest of his career. According to The Associated Press, Carr has thrown 72 incomplete passes in Adams’ direction, the third-most from a quarterback to a receiver since 2016. 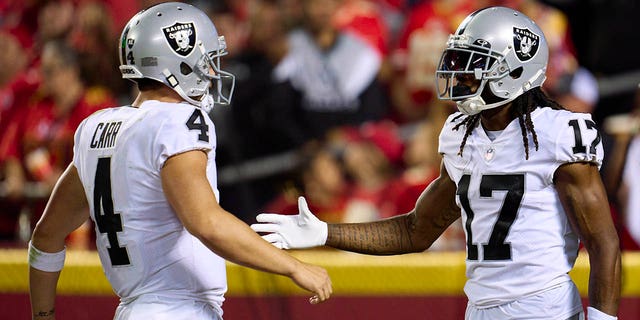 Davante Adams (17) of the Las Vegas Raiders celebrates after scoring a touchdown with teammate Derek Carr (4) against the Kansas City Chiefs during the second half at GEHA Field at Arrowhead Stadium Oct. 10, 2022, in Kansas City, Mo.
(Cooper Neill/Getty Images)

Las Vegas is 6-9 and in third place in the AFC West.

“None of us is happy with where we’re at. But we think it’s an opportunity to evaluate a younger player who hasn’t had much time to play,” head coach Josh McDaniels told reporters Wednesday. “Talking to Derek, who was great, he understands the scenario that we’re in and the situation. Very supportive of the two young guys. Those three guys have obviously worked together hand-in-hand all year, and he’ll do anything he can to help them.”

While noting that the decision was based more on taking a look at Stidham, not because of Carr’s performance, McDaniels did say “there’s a lot to be sorted through once the season is over.”

Running back Josh Jacobs reflected on the Raiders’ season and his four-year career with the franchise earlier this week.

“I’m tired of dealing with this. Every day I come here and bust my a–, and I see the guys busting their a– and the result is not there. For me, the last four years, the result has not been there,” he said. “And, quite frankly, I don’t know what else to do.” 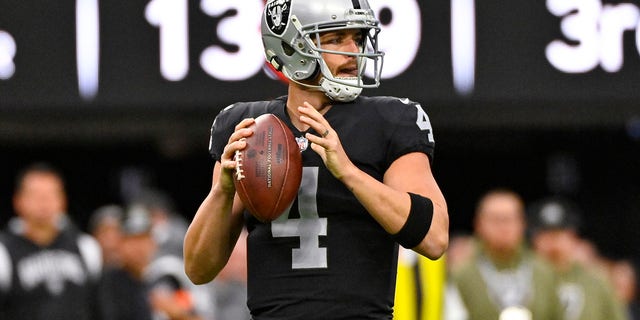 Las Vegas Raiders quarterback Derek Carr (4) throws against the Indianapolis Colts in the first half of a game in Las Vegas Nov. 13, 2022.
(AP Photo/David Becker)

All signs point to Carr having played his final game as a Raider. If the Raiders move on from Carr this offseason, they will have a dead cap hit of $5.625 million, which is hardly anything for a quarterback. On top of that, if he gets injured in the next two games or remains with the team beyond Feb. 15 of next year, he’d be guaranteed over $40 million (his $32.9 million salary for next year and $7.5 million in 2024).

The Raiders finish the season with the San Francisco 49ers Sunday before the Kansas City Chiefs visit Vegas.

December 29, 2022
Oklahoma State’s Mike Gundy gets testy with reporter after bowl loss: ‘Don’t be an a–‘

Oklahoma State’s Mike Gundy gets testy with reporter after bowl loss: ‘Don’t be an a–‘