New York Rep. Ritchie Torres called out the New York Yankees for using the term ‘Latinx’ in a tweet about gun violence, pointing out that it’s a term that most Hispanic people dislike.

‘If the answer is ‘no’, how did ‘Latinx’ come to be the term to use in government and Corporate America?

Gallego’s stance against Latinx is contrast to his fellow Bronx Democrat Alexandria Ocasio-Cortez, and appears to be a bid to mark himself as a centrist.

AOC is famed for hitching her wagon to every woke trend going.

She frequently uses the term Latinx, as well as other controversial and unpopular phrases, such as ‘people who menstruate’ instead of ‘women.’

The young Democrat’s tweet was in response to a New York Yankees tweet that claimed thousands of ‘Latinx’ people are killed or injured by gun violence every year.

‘Latinx’ is a term popularized by woke progressives that is intended to be gender neutral, and inclusive of people who are transgender or non-binary.

But critics say it is difficult for Spanish-speakers to pronounce, and have dismissed it as a right-on sop that continues to poll poorly among most Hispanic people themselves. 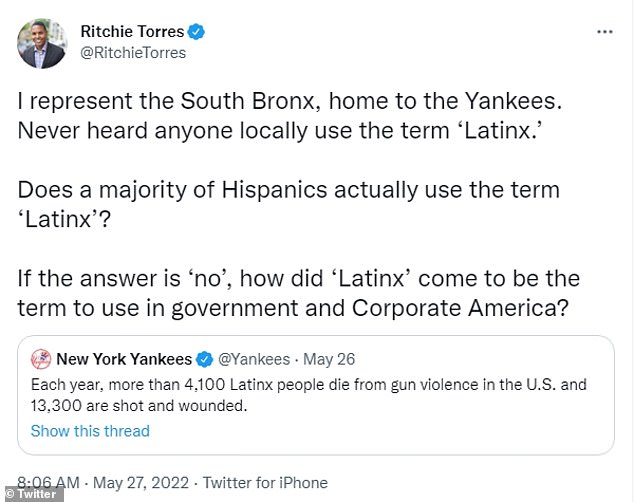 New York Rep. Ritchie Torres called out the New York Yankees for using the term ‘Latinx’ in a tweet about gun violence 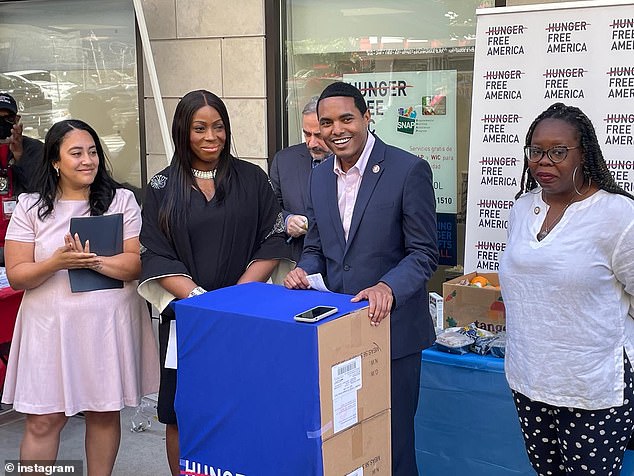 Torres, 34, who is among the first openly gay, black members of Congress, and identifies as Afro-Latino, continued on about the issue in a series of tweets

‘Each year, more than 4,100 Latinx people die from gun violence in the U.S. and 13,300 are shot and wounded,’ the New York Yankees tweeted on Friday.

Torres, 34, who is among the first openly gay, black members of Congress, and identifies as Afro-Latino, continued on about the issue in a series of tweets.

‘If you are speaking to a particular person who prefers ‘Latinx,’ then, by all means, use the term.’

Torres tweeted that ‘if you are speaking to a particular person who prefers ‘Latinx,’ then, by all means, use the term’ 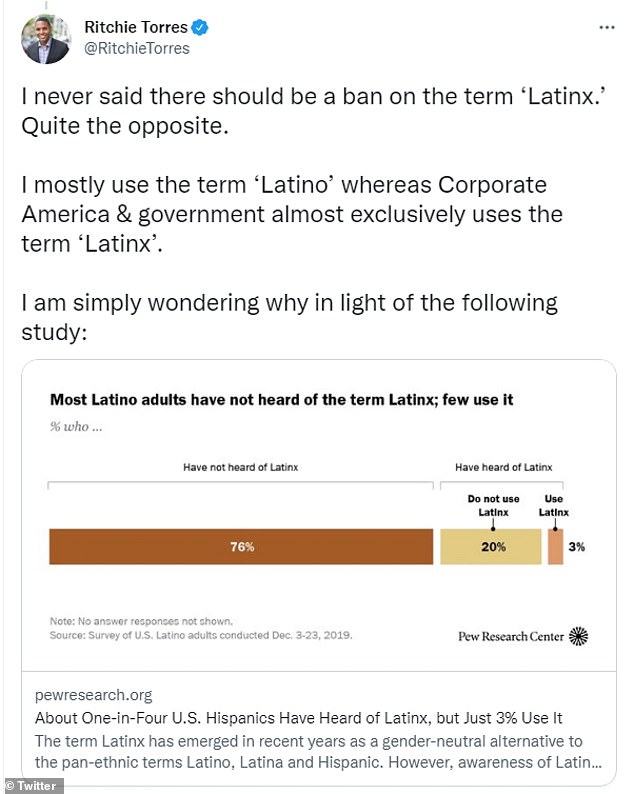 ‘But if you are referring to the Hispanic community in general, why not use the term that the majority itself predominantly uses?’

‘Every community should have the right to label itself, rather than have a label imposed on them by others.’

Torres’ district, New York’s 15th, which is home to Yankees Stadium, is 66 percent Hispanic or Latino, according to the U.S. Census.

Torres pointed to recent polls that indicate show many Hispanics have never heard the term and some who don’t use it.

‘I never said there should be a ban on the term ‘Latinx.’ Quite the opposite,’ he continued to tweet.

‘I am simply wondering why in light of the following study.’

A Gallup poll from 2021 found that fewer than 5 percent of Hispanics and Latinos in the U.S. use the term ‘Latinx.’

A Gallup poll from 2021 found that fewer than 5 percent of Hispanics and Latinos in the U.S. use the term ‘Latinx’

Democratic Arizona Rep. Ruben Gallego blasted members of his own party for using the term ‘Latinx’ to describe people of Latin American descent after a poll was released in December 2021 showing just 2 percent of Latinos recognize the term ‘Latinx’ while 40 percent feel offended by it.

‘To be clear, my office is not allowed to use “Latinx” in official communications,’ wrote Gallego, who is of Columbian and Mexican descent.

‘When Latino politicos use the term, it is largely to appease white rich progressives who think that is the term we use,’ he continued. ‘It is a vicious circle of confirmation bias.’

The term was coined by left-wing academics and activists as a gender-neutral term to include non-binary people in the Spanish-speaking community. It has since spread among the general public, but has become controversial among the Spanish speaking community, who argue it does not follow the rules of the language.

‘Look y’all,’ Gallego wrote in a subsequent tweet. ‘Hispanic, Latin American are gender neutral. So we already have gender-neutral terms to describe the Latino community. 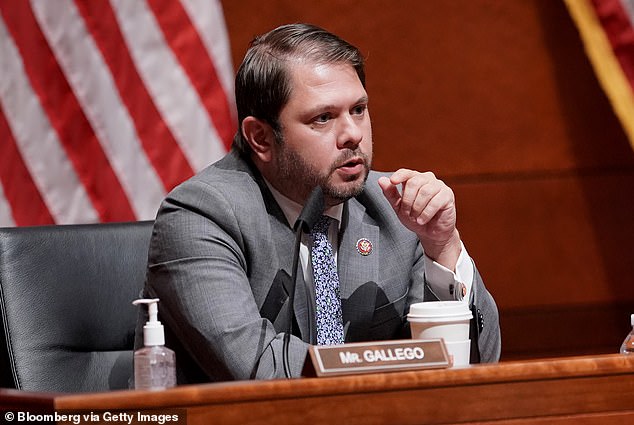 Ruben Gallego, a Democratic representative from Arizona, slammed members of his own party for using the term ‘Latinx’ to describe people of Latin American descent. He is pictured here speaking at a House Armed Services Committee hearing 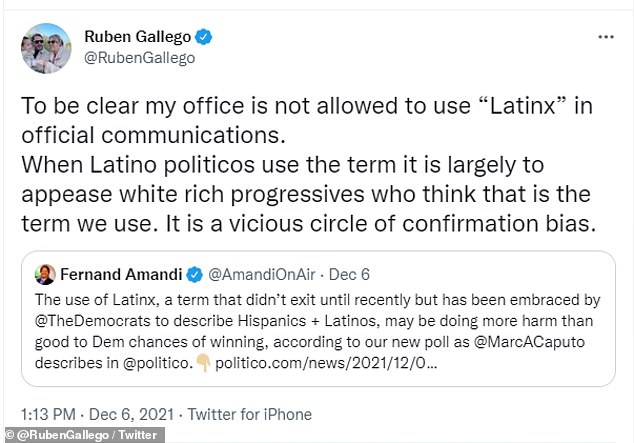 Gallego, who is of Columbian and Mexican descent, said the term Latinx is used ‘performatively’ by ‘white rich progressives who think this is the term we use’

‘Adding an X and creating a new word comes off as performative,’ he added, saying: ‘It will not lose you an election, but if your staff and consultants use Latinx in your mass communication, it likely means they don’t understand the Latino community, and is indicative of deeper problems.’

Gallego’s tweets came in response to a poll from Bendixen and Amandi International showing that only 2 percent of the 800 Hispanic voters it polled last month refer to themselves as Latinx, while 68 percent call themselves Hispanic, and 21 percent favored Latino or Latina to describe their ethnic backgrounds.

‘The numbers suggest that using Latinx is a violation of the political Hippocratic Oath, which is to first do no electoral harm,’ pollster Fernand Amandi, whose firm advised Barack Obama’s successful outreach to Hispanic voters during his two presidential runs, told Politico.

‘Why are we using a word that is preferred by only 2 percent, but offends as many as 40 percent of those voters we want to win?’

Those who use the term say that the word – and the larger trend of making Spanish words gender-inclusive by ending them in an X – is not a product of the US left or white elites, but can instead be traced back to Latin America and Latinos.

They say it is also an alternative to the term Hispanic, which has been criticized for its ties to Spain, which colonized much of Latin America.

But Spanish is a gendered language, with feminine terms traditionally ending in an ‘a,’ and more masculine terms ending in an ‘o.’ When referring to a group of mixed-gender people, the language defaults to the masculine.

And some Spanish speaking members of the Latino community argue the term is difficult to pronounce in their native tongue.