‘Prince Harry shouldn’t be telling the US what to do – it just isn’t his business’: Biographer lays into Duke after US Supreme Court Justice MOCKED the royal for attacking decision to clamp down on access to abortion in the US

A royal biographer today warned Prince Harry to ‘mind his own business’ after he was publicly mocked by a US Supreme Court justice for attacking the court’s decision to overturn Roe v Wade.

The Duke of Sussex used a ‘virtue-signalling’ speech at the UN last week to criticise the ‘global assault on democracy and freedom’, in a thinly-veiled swipe at the USA’s highest court.

During his own speech in Rome, Justice Samuel Alito singled out Prince Harry along with Boris Johnson, Justin Trudeau and Emmanuel Macron for criticising the opinion.

‘He’s behaving in such a ridiculous manner – he shouldn’t be telling the United States what to do,’ she told MailOnline.

‘Frankly this just isn’t his business. He’s still an English prince and if he wants to go into politics along with Meghan – which will be laughable – then he should drop his royal title.

‘He’s becoming a laughing stock. His popularity has already sunk here and it shows he could be going the same way in America.’

Addressing a largely empty UN General Assembly last Tuesday as part of a celebration of Nelson Mandela, Harry mentioned Roe v Wade – which hands back decisions over abortion rights to US states – in the same breath as the war in Ukraine.

He said: ‘From the horrific war in Ukraine to the rolling back of constitutional rights in the US we are witnessing a global assault on democracy and freedom, the cores of Mandela’s life.’

It came after his wife Meghan – who accompanied him to the UN and is rumoured to harbour political ambitions – described how the Duke had a ‘gutteral’ reaction to the Supreme Court’s bombshell overturning of the 1973 ruling.

The Sussexes have made a string of high-profile interventions in recent years, from urging voters to ‘reject hate speech’ before the 2020 US presidential election – a clear swipe at Donald Trump – to Meghan’s personal lobbying campaign in favour of paid parental leave.

Scroll down for video. 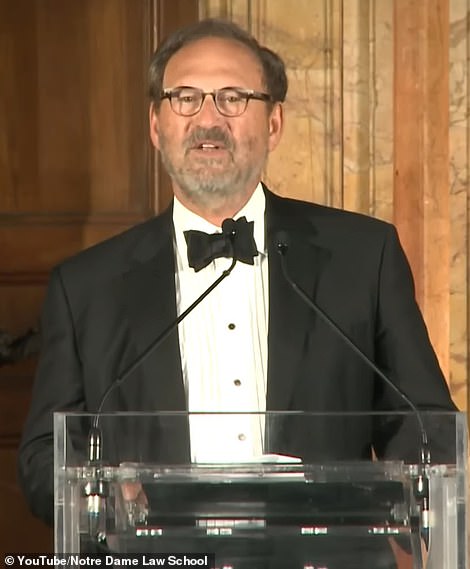 Alito – one of the Supreme Court’s most conservative judges – also called out Mr Trudeau and Mr Macron in his speech, while reserving extra quip for Prime Minister Johnson.

‘I had the honor this term of writing I think the only Supreme Court decision in the history of that institution that has been lambasted by a whole string of foreign leaders who felt perfectly fine commenting on American law,’ he said.

Alito added: ‘One of these was former Prime Minister Boris Johnson, but he paid the price,’ in a light-hearted reference to the PM’s plans to  resign after a Tory party rebellion.

Alito was speaking at a July 21 conference on religious liberty in Rome hosted by the University of Notre Dame Law School. Notre Dame posted the footage online last night.

Harry’s speech was not the first time he or the Duchess of Sussex have waded into American politics.

During a Time 100 video in September 2020, they called on American voters to ‘reject hate speech, misinformation and online negativity’ in ‘the most important election of our life.’

In June, Ms Markle told activist Gloria Steinem she is willing to go to Washington DC to join protests against the abortion ruling and urged people to vote in the November midterms.

In an interview with Vogue, Meghan also urged men to be ‘more vocal’ with their anger at the repealing of Roe v Wade.

Members of the royal family are supposed to be politically neutral and when they stepped back from their roles the Sussex’s vowed that ‘everything they do will uphold the values of Her Majesty’.

But Meghan and Harry recently hired Miranda Barbot, a former aide to former president Barack Obama who was central to his successful reelection campaign in 2012.

Meghan’s political ambitions have long been talked about since she and Harry emigrated from Britain including claims that she would ‘seriously consider’ running for president if her husband dropped his royal title. 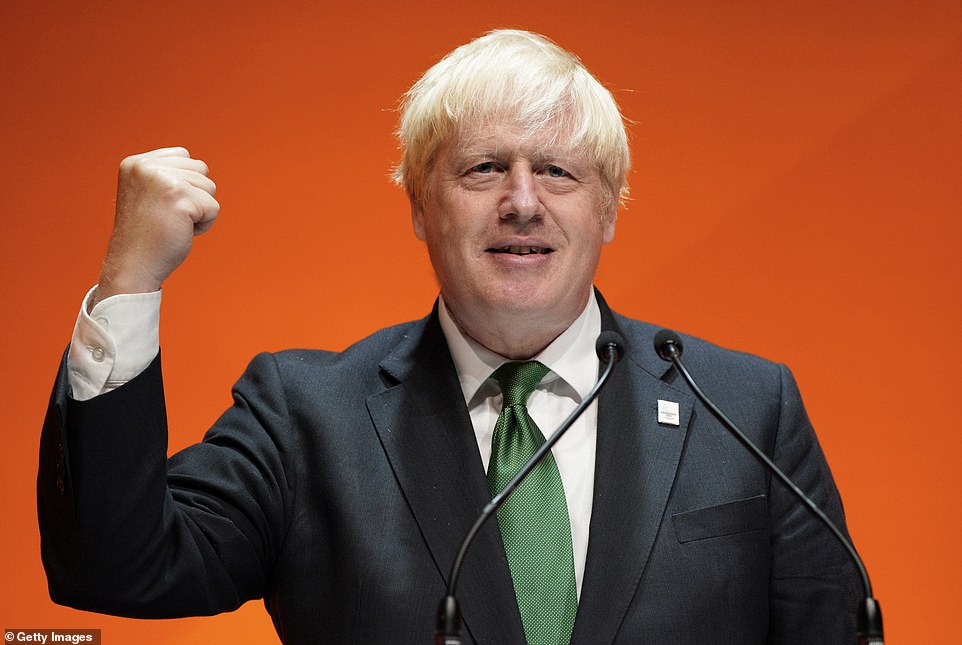 Alito also joked that Prime Minister Boris Johnson, pictured on July 28, torpedoed his political career by speaking out against the end of Roe 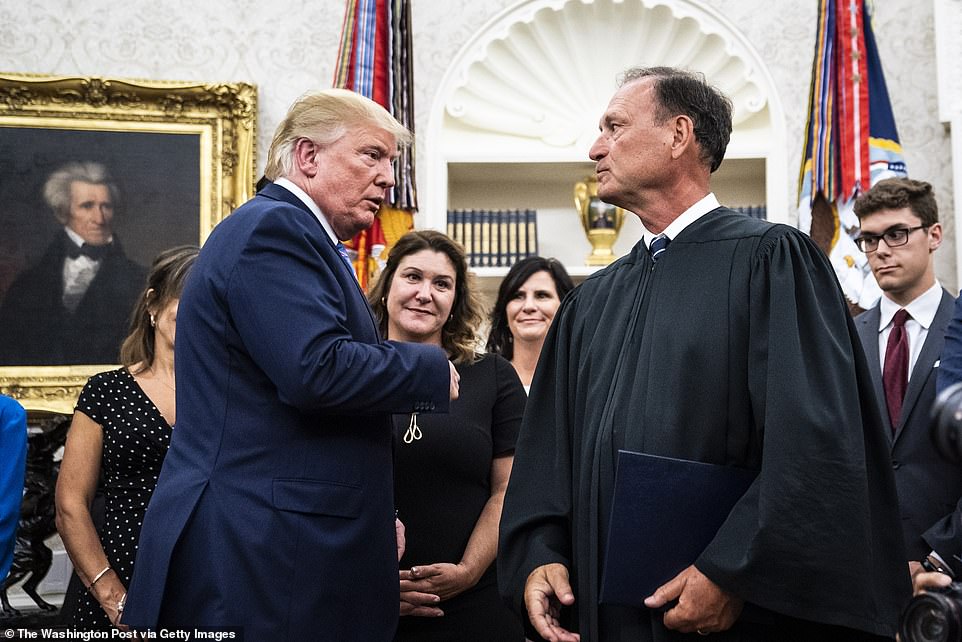 Harry and Meghan’s frequent forays into US politics

2020 – During a September video shot for Time 100 before the presidential election, Harry and Meghan called on American voters to ‘reject hate speech, misinformation and online negativity’ in ‘the most important election of our life,’ which was viewed as a not-so-veiled rebuke of President Donald Trump.

Critics of the formerly-royal couple’s comments included none other than her majesty’s family, who noted the Sussexes vowed that ‘everything they do will uphold the values of Her Majesty’ – values that are supposed to include not picking sides in political matters. Buckingham Palace was forced to distance itself from Harry’s remarks by saying that ‘the Duke is not a working member of the royal family’ and describing his comments as ‘made in a personal capacity’.

A Source close to the Sussexes also noted Meghan was keen to keep her American citizenship after she became a royal in case she ever wanted to go into US politics. The source told Vanity Fair’s Katie Nicholl that Meghan ‘would seriously consider running for president’ after she gave up her royal title.

2021 – Meghan is revealed to have been calling Republican senators on their personal phones and using her former royal title to urge them to vote in favor of a paid paternal leave legislation.

‘This is Meghan, the Duchess of Sussex,’ Markle reportedly said to West Virginia senator Moore Capito. She also did the same with Senator Susan Collins of Maine.

‘Much to my surprise, she called me on my private line and introduced herself as the Duchess of Sussex, which is kind of ironic’ said Collins.  ‘I was happy to talk with her, but I’m more interested in what people from Maine are telling me about paid leave,’ she told Politico.

She also submitted a 1,030 word letter to Speaker of the House Nancy Pelosi in which she made made a plea for the parental legislation. The letter was written on Duchess of Sussex letterhead. In the letter, the former duchess wrote that the US’s economic systems were ‘past their expiration date’ and ‘too many Americans are forced to shortchange themselves when it comes to what matters to them.’

2022 – In May, Markle chartered a private jet to travel 1,400 miles to Texas where she laid a bouquet of white ‘peace’ roses at a memorial to the 19 children and two teachers slain at Robb Elementary School by murderous maniac Salvador Ramos. She also made a surprise visit to a blood center with two crates of food and drinks for donors, volunteers revealed, as one admitted: ‘I had no idea who she was’ and another confused her with a neighbor.

Though cameras and news crews surrounded the memorial on Thursday, Markle did not make any remarks to the press. Then in an interview with Vogue following the overturning of Roe v Wade, Meghan also urged men to be ‘more vocal’ with their anger at the repealing of Roe v Wade and said that Prince Harry’s response to the Supreme Court’s decision last Friday was ‘guttural.’

‘My husband and I talked about that a lot over the past few days. He’s a feminist too,’ she said, adding ‘We have to channel that fear into action. We can start this November in the midterms. We have to vote, every time.’

Markle said she was willing to travel to Washington DC to join in on pro choice marches. Conservative Georgia congressman Rep.

Buddy Carter chimed in on Markle’s comments, saying ‘I think Americans made it pretty clear in 1776 that they don’t want members of the British Royal Family making decisions for them.’ In earlier in the spring, the Sussexes hired Miranda Barbot, a former aide to president Barack Obama who was central to his successful reelection campaign in 2012.

Two years ago, a friend of the Duchess told Vanity Fair magazine that one of the reasons she did not give up her American citizenship when she married into the Royal Family was to allow her to keep open the option of entering politics.

President Biden’s sister, Valerie, 76, recently invited the duchess to join the Democratic Party and said she would ‘of course’ make a good presidential candidate.

‘I think that she does see her future as possibly a congresswoman for California,’ said Tom Bower, the author of a new book on Meghan and Harry, in an interview with Daily Mail Royals.

He added: ‘Her problem is twofold. One is that it is very badly paid, and Meghan needs a lot of money to live, the second is that you’ve got to be pretty tough in a political fight. You are up against a lot of competitors.’

He also revealed Meghan had become a close mentor to former presidential candidate Hillary Clinton, who allegedly arranged philanthropic ventures for the couple.

Back in Britain, Harry has been battling the Home Office for police protection when his family are in the UK – a case estimated to have cost the taxpayer £100,000 so far, it emerged yesterday.

The Duke has been taking legal action against the department after being told he would no longer be given the ‘same degree’ of personal protective security when visiting from the US.

His representatives have previously told of how he wants to bring Meghan and their children Archie and Lilibet to visit from the US, but that they are ‘unable to return to his home’ because it is too dangerous.

Two hearings have taken place at the High Court in London since May, so it is predicted that the total bill will surpass £100,000. And that figure will rise further after a judge granted Harry’s legal team permission for part of his claim to have a judicial review into the Home Office’s decision.

The cost to the taxpayer would be reduced if the Home Office is awarded its costs back by the court and the Whitehall department run by Priti Patel has already said it will demand their legal costs back from Harry if his High Court battle fails.

MailOnline has asked Schillings, the Duke of Sussex’s UK lawyers, and the Home Office to comment.

Meanwhile, the Sussexes are facing a second court battle in America where Meghan has gone head to head with her estranged half-sister, Samantha.

Samantha is suing Meghan for allegedly peddling a ‘rags to riches’ tale in her Oprah interview, and also over comments in Finding Freedom, the book penned by Meghan’s close friend Omid Scobie.

She has argued it was dishonest for Meghan to claim she grew up as an only child, claiming it is how she feels despite her technically having two half-siblings.

In response, the Duchess’s lawyers claimed it is a ‘feeling’ and not a ‘fact’ that she grew up as an only child.

‘It is hard to imagine a more personal and subjective feeling than how one views their own childhood. Moreover, Plaintiff’s opposition completely ignores the context of the statement, where Ms Winfrey asked Meghan about her ‘relationship’ with Plaintiff (to whom Ms Winfrey referred as her ‘half-sister on her father’s side’).

‘Meghan’s response to that question that she ‘grew up as an only child’ was obviously not meant to be a statement of objective fact that she had no genetic siblings or half-siblings.’

She also dismisses Samantha’s complaints about information in Finding Freedom, a book by Omid Scobie, saying Meghan can’t be blamed for that because she didn’t write the book.

‘Meghan did not make the statements; she cannot be liable for them. It is that simple,’ her lawyers say. 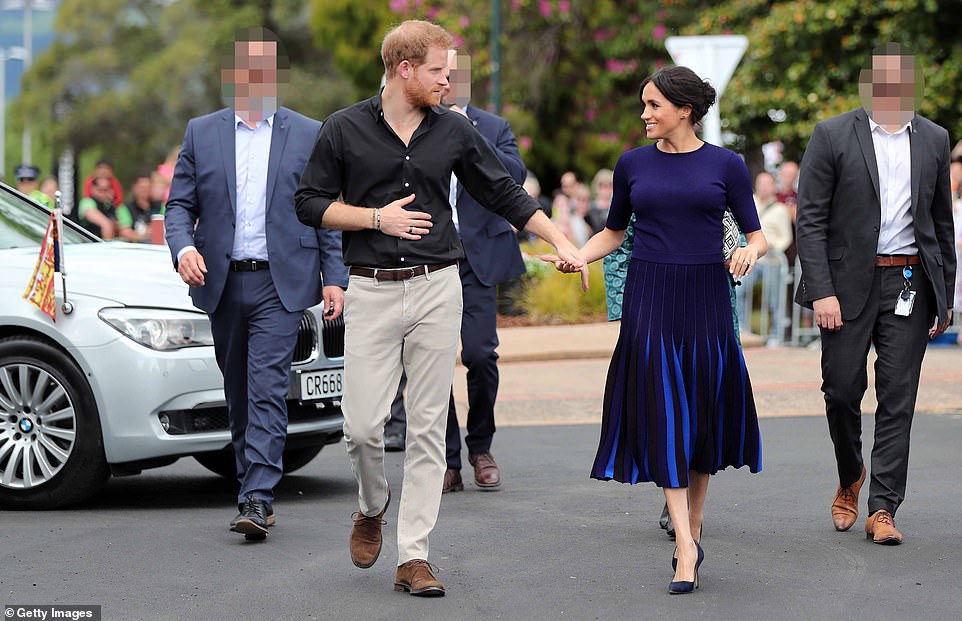 Back in Britain, Harry has been battling the Home Office for police protection when his family are in the UK – a case estimated to have cost the taxpayer £100,000 so far, it emerged yesterday