Prince Philip at his playful best! Royal home movies show the Duke of Edinburgh playing polo, waterskiing and whizzing down the waterslide as Queen praises his ‘mischievous twinkle’

From chasing dogs around the garden to whizzing down a waterslide, poignant home movies capture the Duke of Edinburgh at his mischievous best.

The clips, many of which have never been seen before, were shown as part of a BBC documentary marking the Queen‘s Platinum Jubilee.

They show jovial Prince Philip going boating in Balmoral, water skiing in the Mediterranean and diving into a swimming pool as he relaxed away from the formality of his public duties. 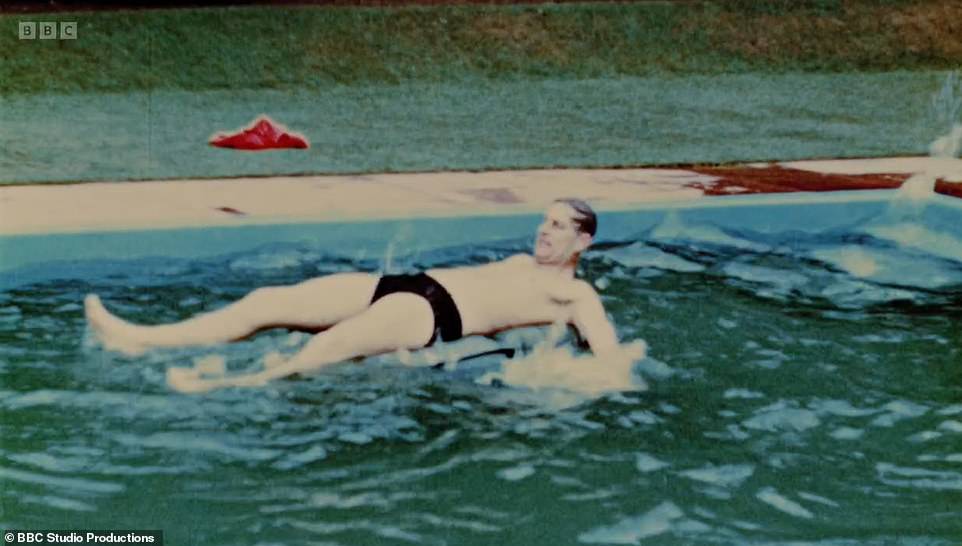 Playful Philip! The Duke of Edinburgh is seen splashing around in a royal home movie aired in a BBC One documentary 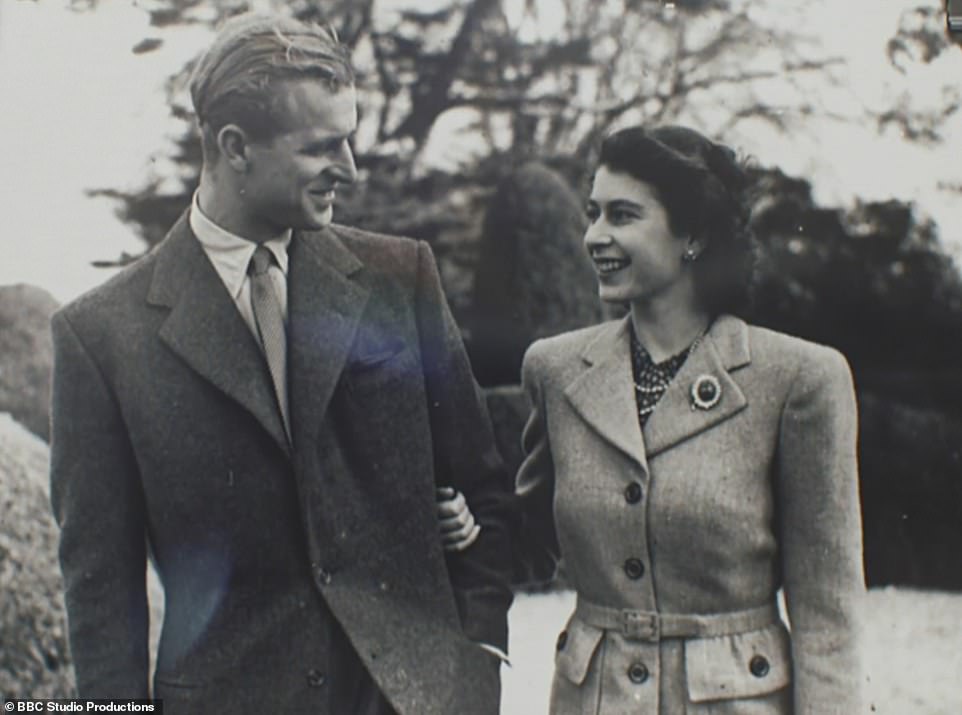 Lasting love: The documentary, released to mark the Queen’s Jubilee, charted the early days of their 73-year marriage 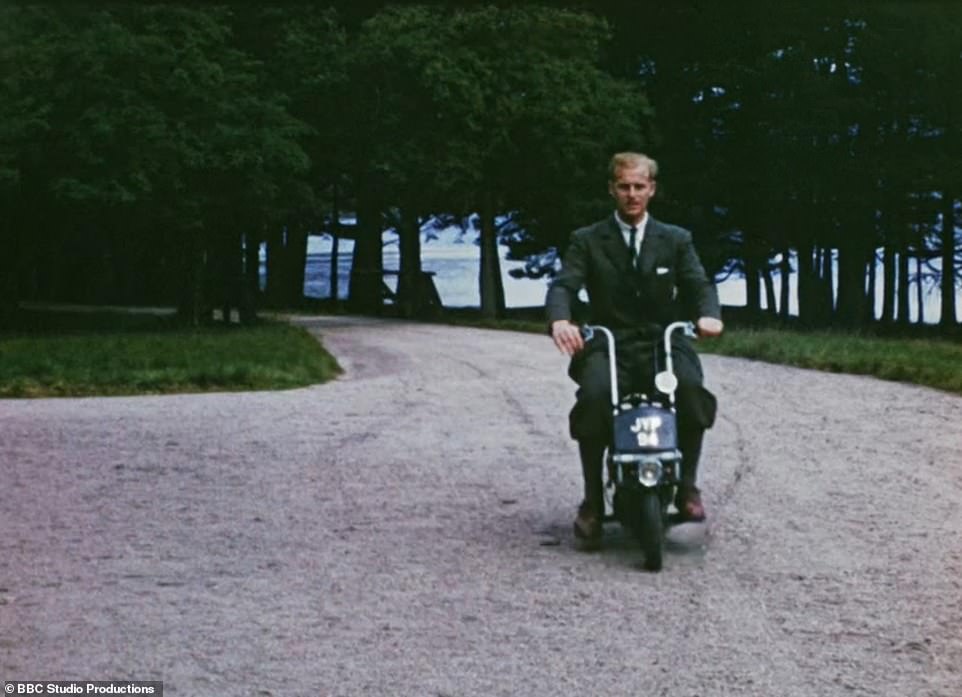 Thrill-seeker: One of the clips shows a dashing Prince Philip riding a miniature motorcycle through the grounds at Balmoral 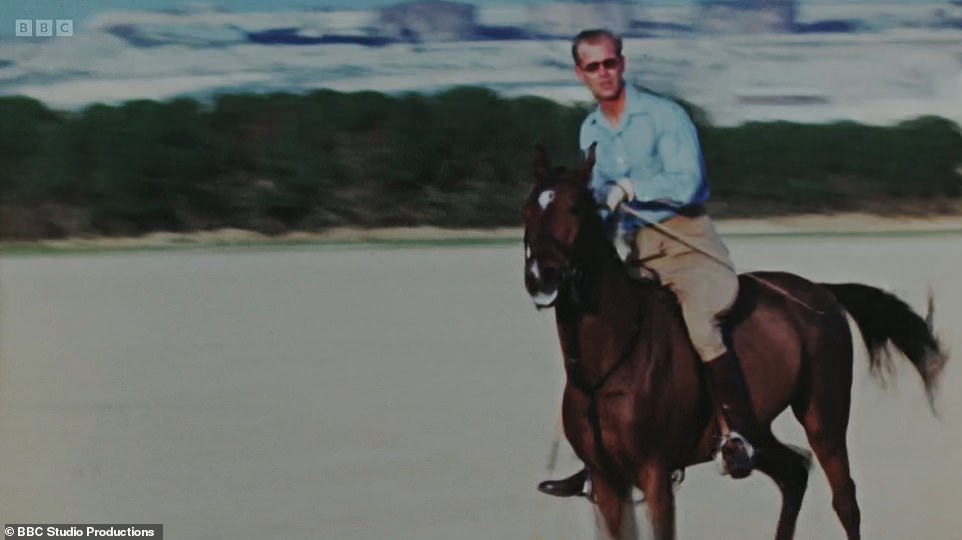 Sportsman: Home movies also show the athletic Duke of Edinburgh playing a game of polo as a young man 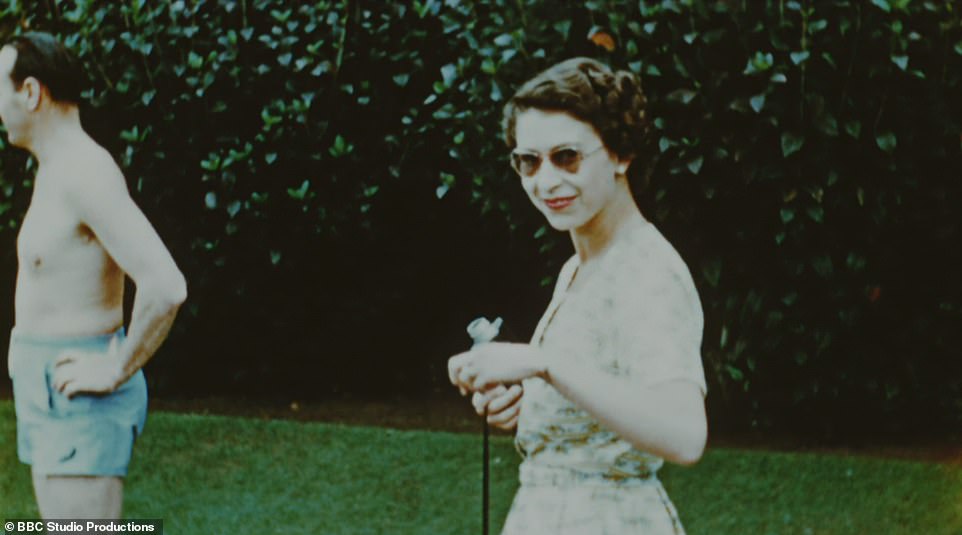 Devoted: One of the videos, taken by a pool, show the Queen filming her husband as he splashed around in the water

Elizabeth: The Unseen Queen, which aired last night, featured never-before-seen footage and photos of Her Majesty, including clips of a young Princess Elizabeth playing with her father, George VI.

Unlike conventional documentaries featuring interviews and narration, this Jubilee special relies largely on the Queen’s own voice and words, alongside newsreel audio.

The filmmakers listened to over 300 of the Queen’s speeches, spanning over eight decades.

Speaking on her husband, who died last year aged 99, the Queen said: ‘His sense of service, intellectual curiosity and capacity to squeeze fun out of any situation were all irrepressible.

‘That mischievous, enquiring twinkle was as bright at the end as when I first set eyes on him.’ 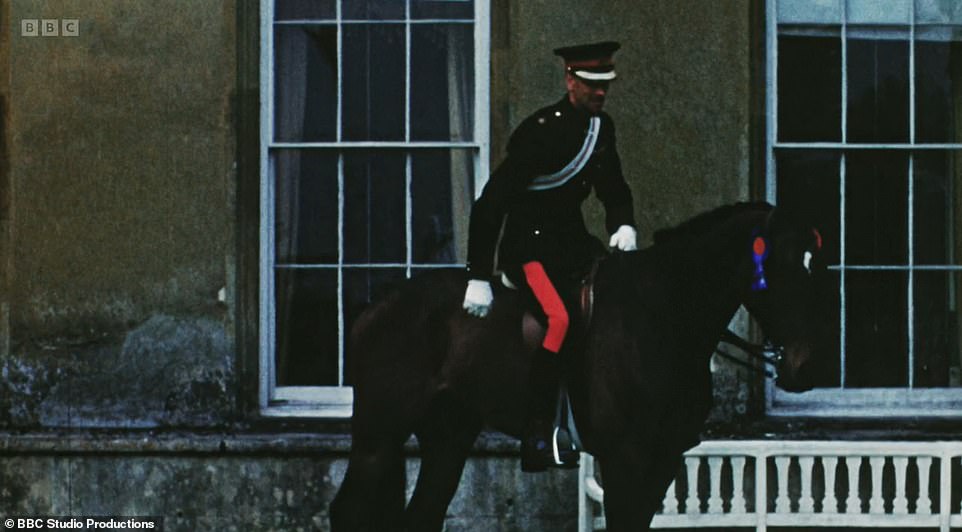 Unwavering support: The Queen praised her husband’s sense of duty in a voiceover accompanying the clips of Prince Philip 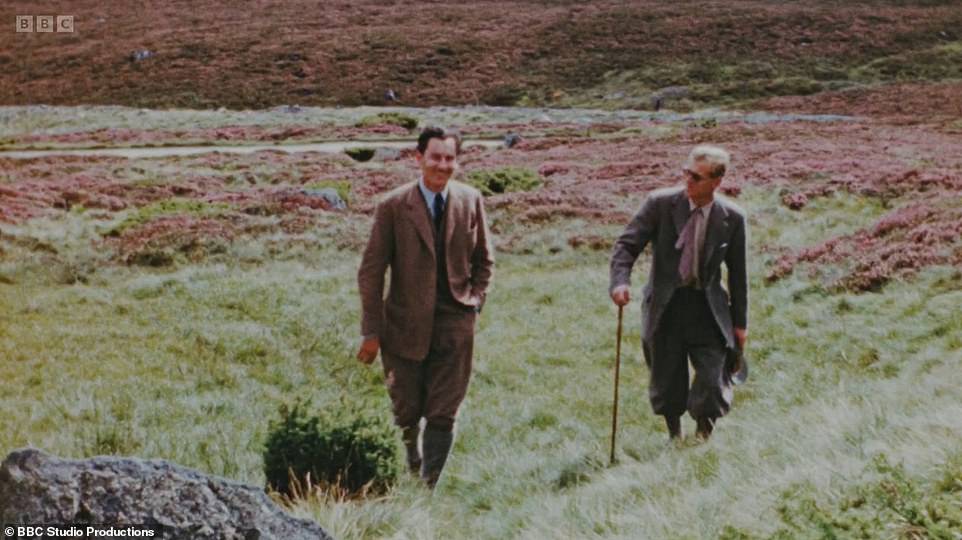 In his element: The videos, including the one above, showed Prince Philip away from the formalities of public life 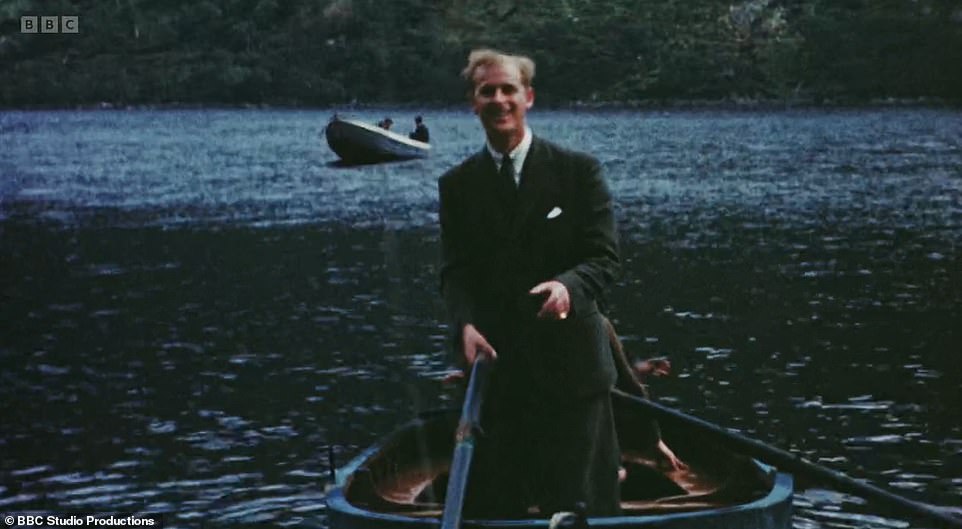 Splashing around! In one touching moment the Queen films Philip as he brings a rowing boat into shore at Balmoral 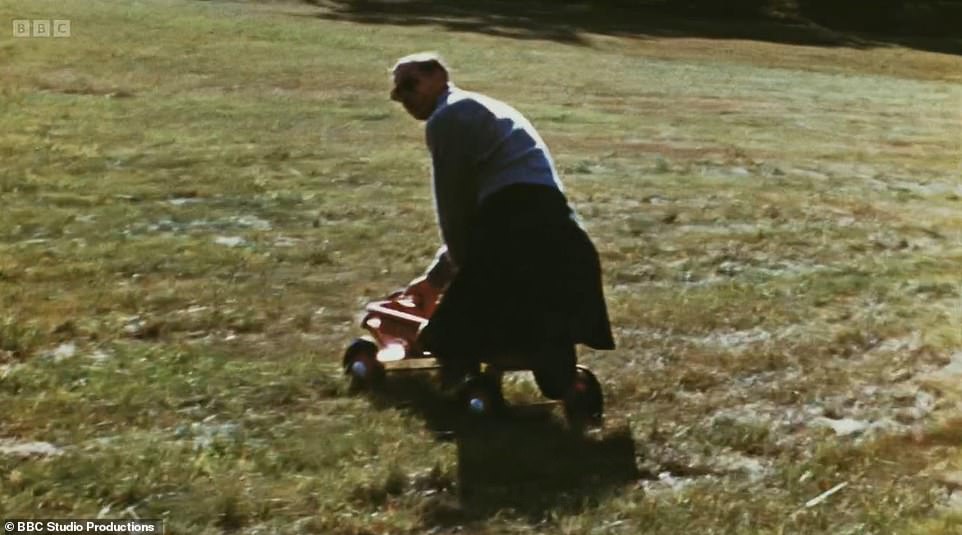 King of larks! During one family holiday to Balmoral, Prince Philip rode down a grassy hill on a ride-on car toy 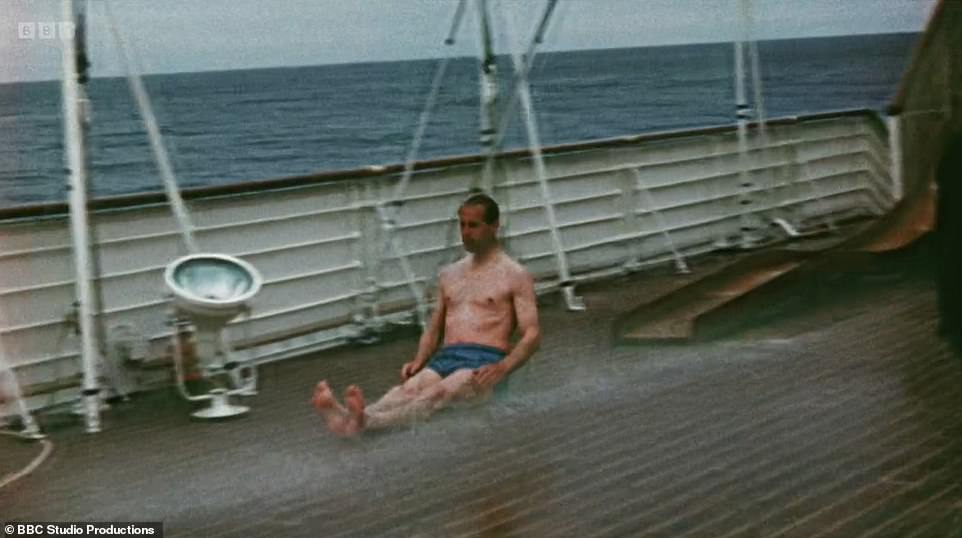 Making a splash! The Duke of Edinburgh whizzes down a waterslide on board HM Yacht Britannia, a royal holiday favourite 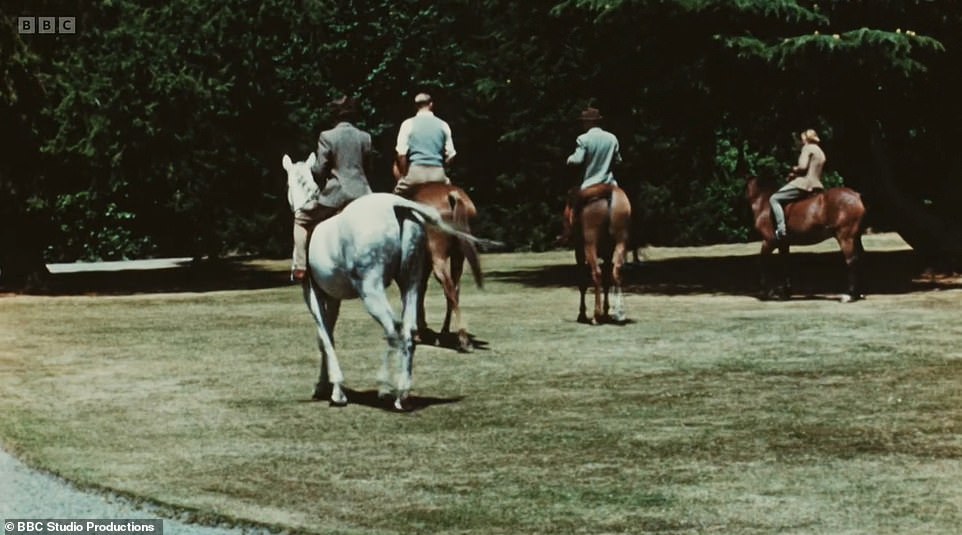 Shared passions: The Queen, left, and the Duke of Edinburgh, centre, ride out on their horses in one of the candid clips

One movie shows the couple, then just a few years into their 73-year marriage, enjoying some time together on the loch in Balmoral.

Elizabeth beams as she tosses a rope to her seaman husband as he brings a rowing boat into shore.

Elsewhere Philip is filmed playing polo, splashing around in the pool and riding out with his wife for a day of horse riding.

The Royal Family have filmed each other since the 1920s but hundreds of these home-made recordings have been held privately by the Royal Collection in the vaults of the British Film Institute for decades.

The documentary traces the Queen’s journey from earliest childhood, being pushed in a pram as a baby by her mother, to her Coronation at the age of just 27 in 1953, following the death of her father George VI in 1952. 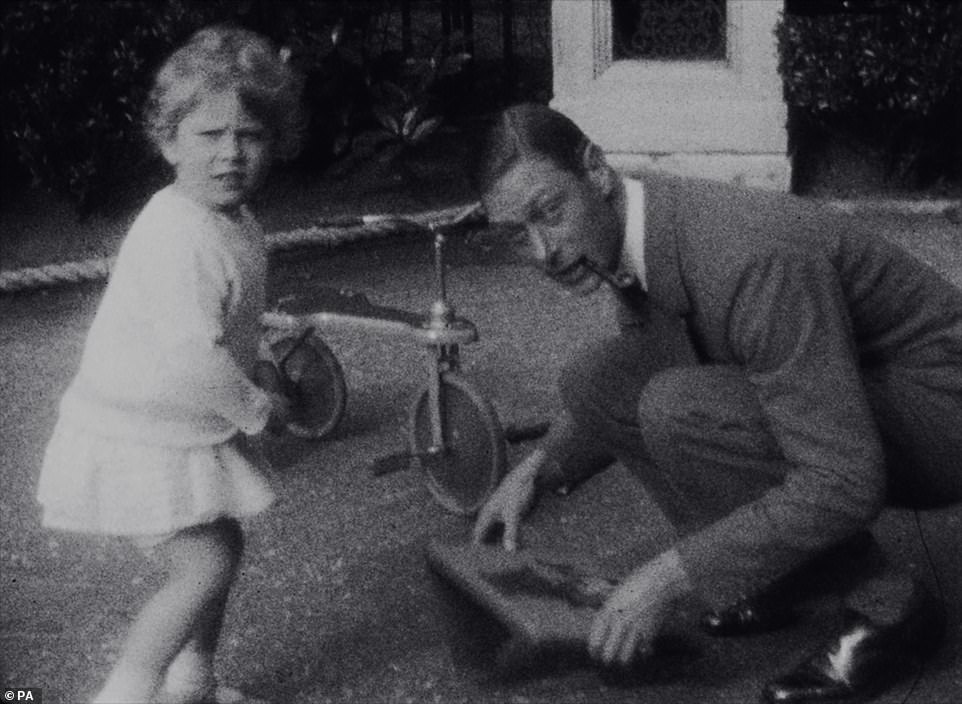 Proud father: Some of the most touching moments are between George VI and his daughters. Above, George, then the Duke of York, gets down on his knees to play with Princess Elizabeth in the garden of their home in Piccadilly in 1930 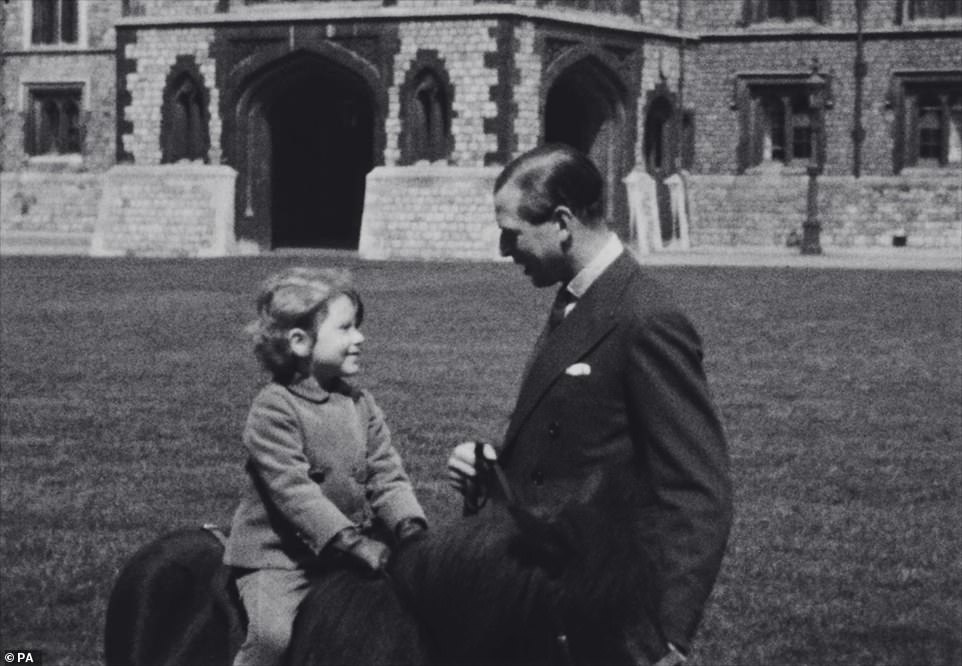 Much missed: One black-and-white shot shows Elizabeth with her uncle Prince George, Duke of Kent, who died in 1942 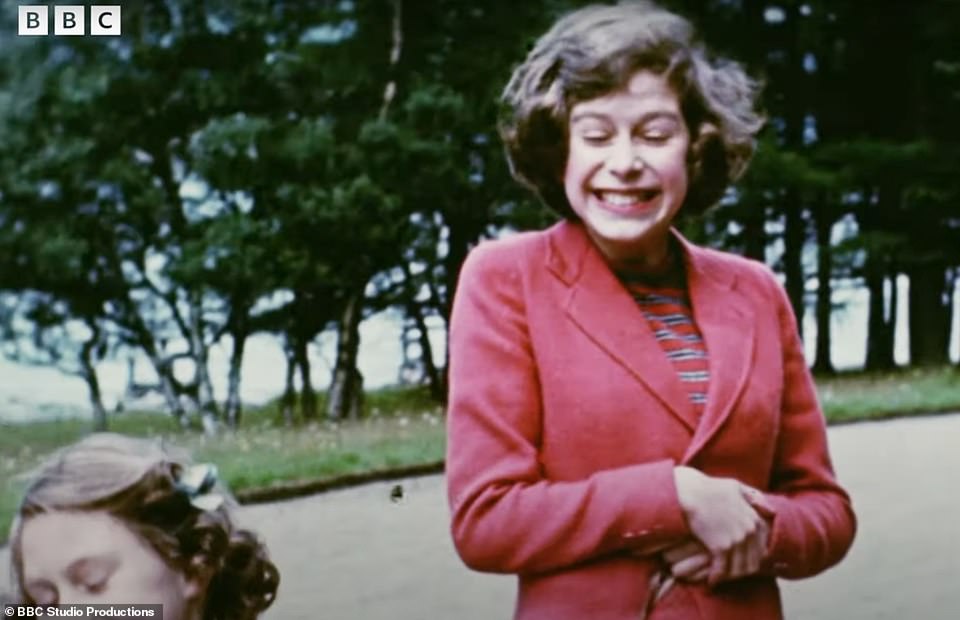 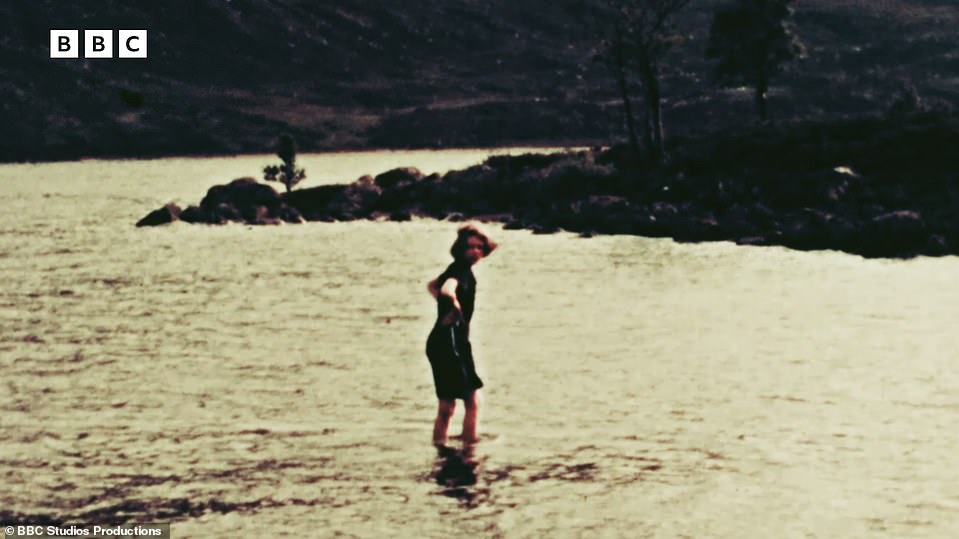 Carefree: Princess Elizabeth, then aged 12, skims stones in the loch during a summer break to Balmoral in 1938 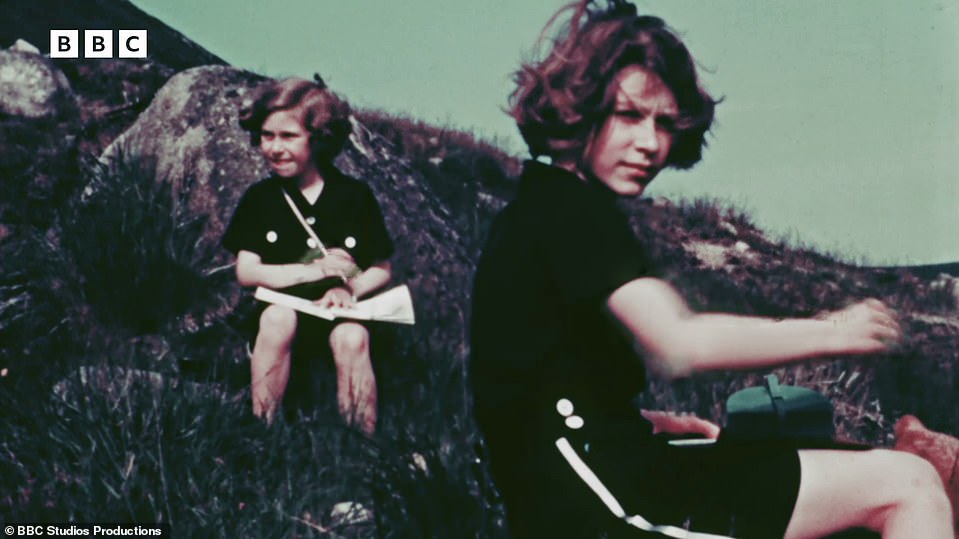 Running around the marshes: Princess Elizabeth, right, and Princess Margaret join their parents in Balmoral in 1938 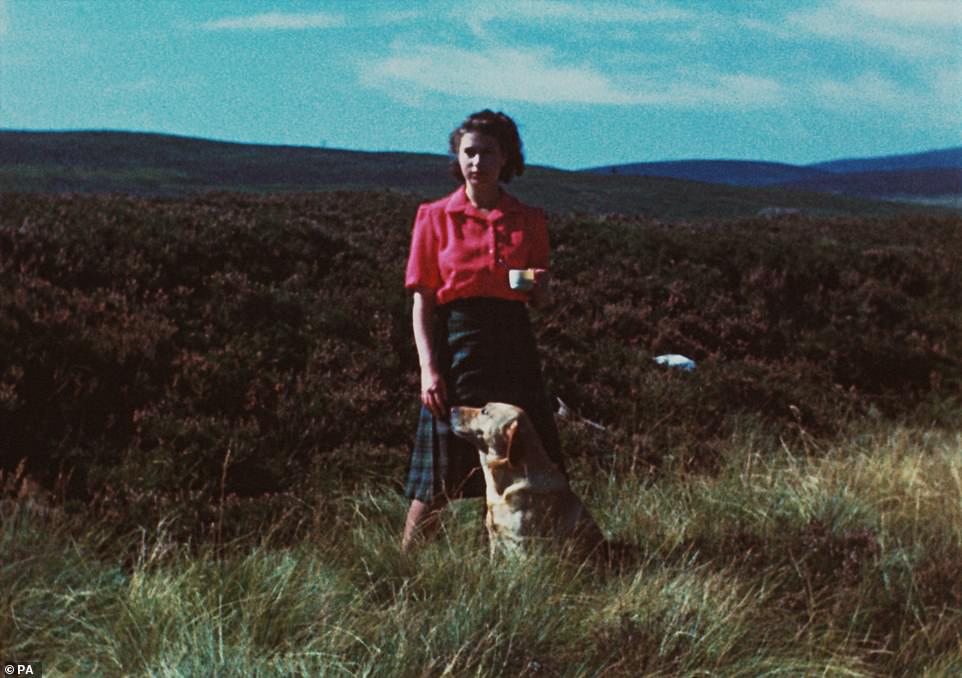 In her element: Princess Elizabeth, dressed in a kilt and blouse, takes a dog out for a walk in the grounds at Balmoral in 1946 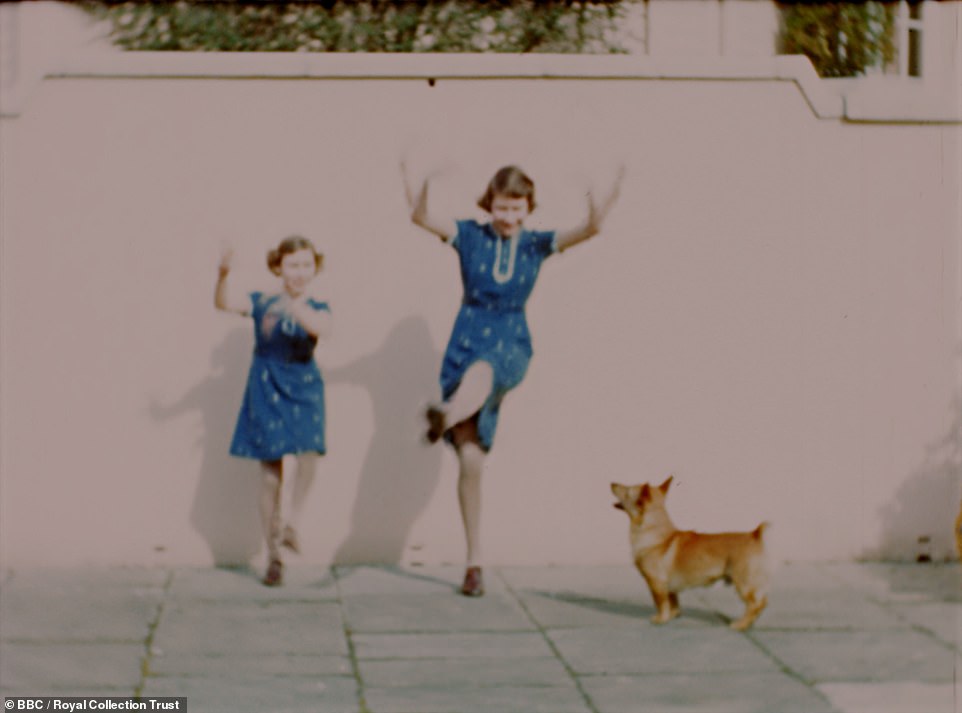 Dancing queens! Princess Margaret and Princess Elizabeth at the Royal Lodge Windsor in 1940, with a pet corgi next to them 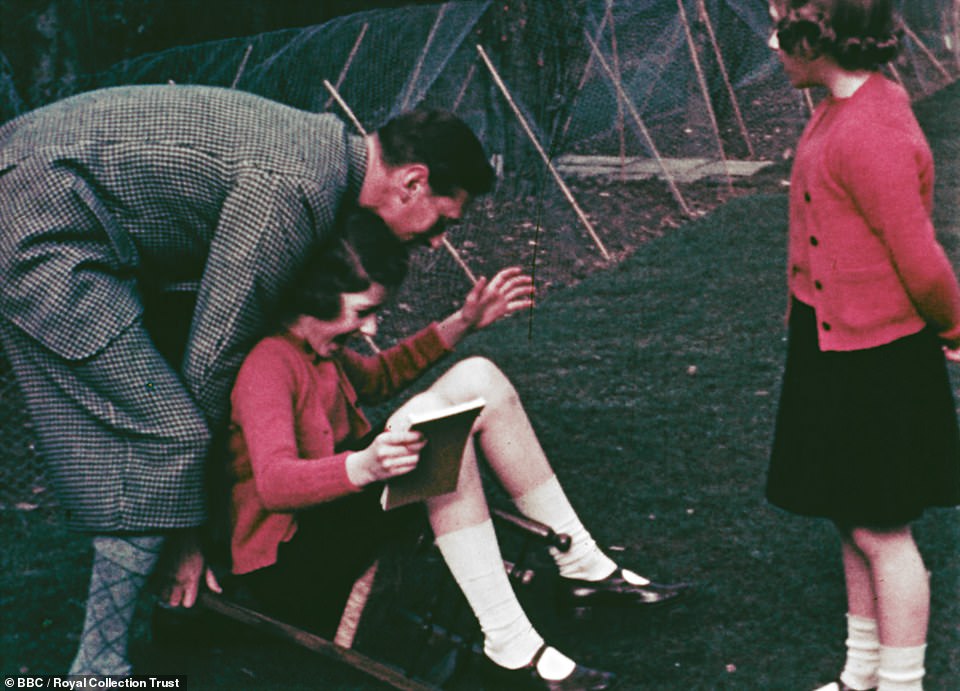 Taking a tumble! One clip shows the young Elizabeth at the Royal Lodge in Windsor in 1940, where she frolics in matching dresses with Princess Margaret – and a corgi – and falls backwards on a chair in an apparent prank by George VI 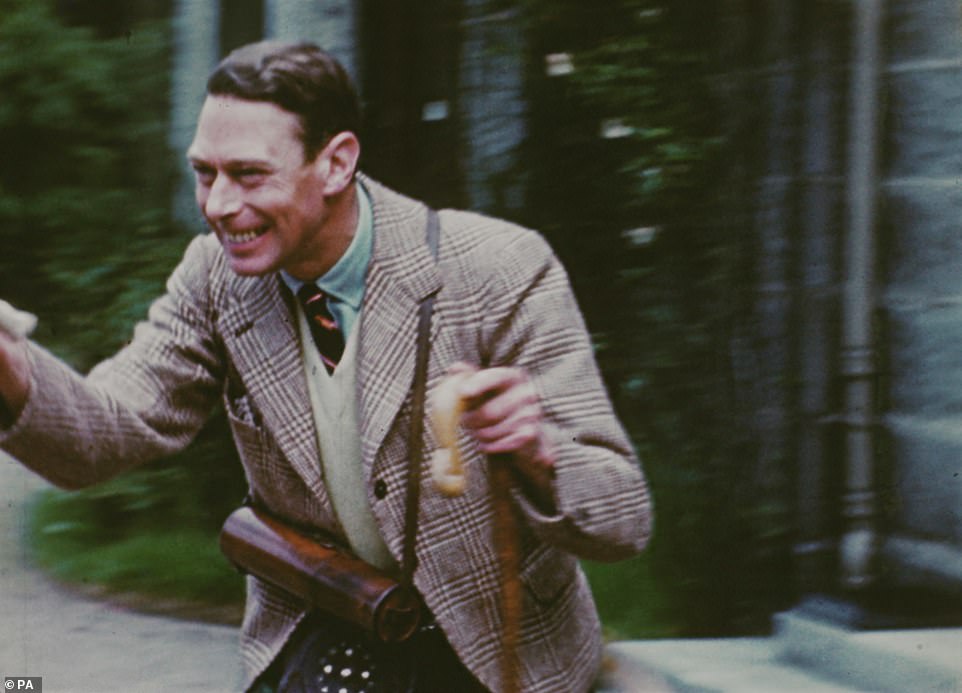 Here I come! The home movies also capture the free-spirited side of King George VI, pictured in Balmoral in August 1939

One clip shows the young Elizabeth at the Royal Lodge in Windsor in 1940, where she frolics in matching dresses with Princess Margaret – and a corgi – and falls backwards on a chair in an apparent prank by George VI.

There are sections paying tribute to her late grandfather, George V, nicknamed Grandpa England, and her uncle the Duke of Kent who was killed in action during the Second World War.

It even remembers her uncle Edward VIII, who abdicated to marry the American divorcee Wallis Simpson, forcing his brother onto the throne and his daughters Elizabeth and Margaret up the line of succession.

Viewers remarked how it is in parts a ‘love letter’ to the Queen’s beloved father, George VI. The monarch, who died in 1952, looks every inch the proud father as he plays with his daughters in the garden, tipping them upside down and playing pranks with the family corgis. 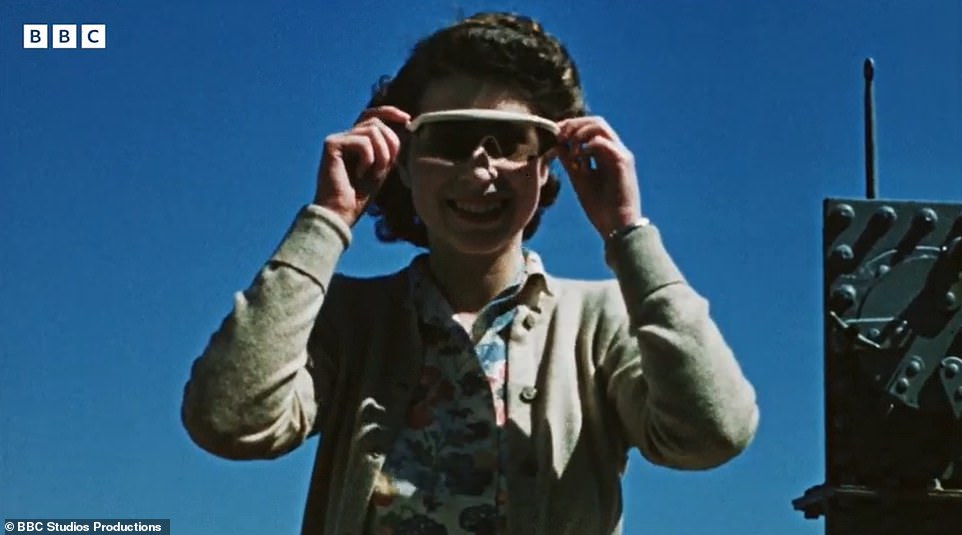 Look at me! Some of the footage was shot on board HMS Vanguard, the vessel which took the Royal Family to South Africa in 1947. Above, a playful Princess Elizabeth, then aged 20, giggles as she tries on a pair of sunglasses for the camera 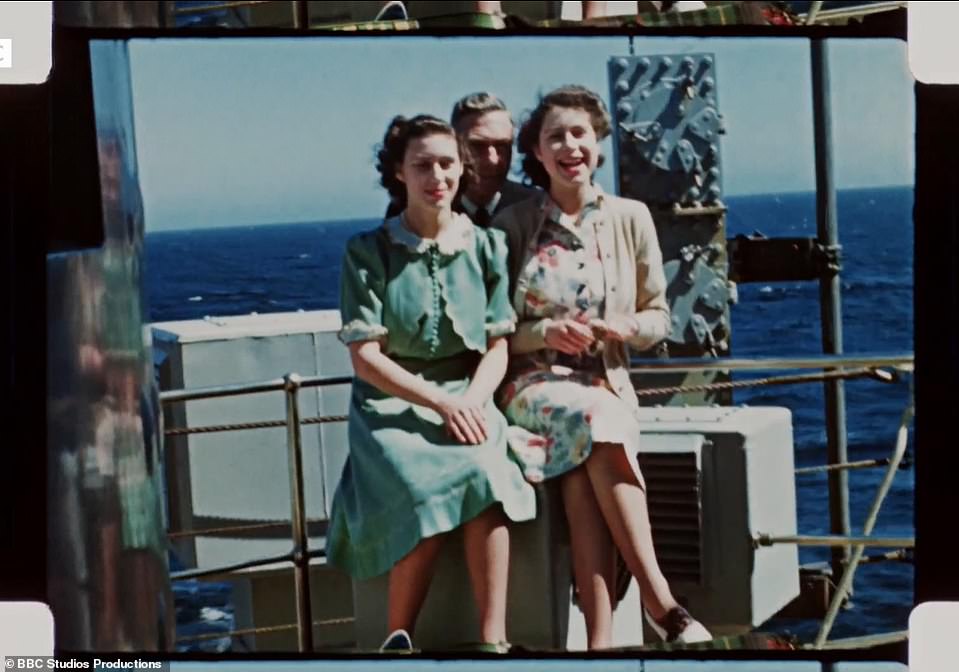 Beaming: Seen with her father and sister, this is the young Princess Elizabeth enjoying a trip on the high seas. The shots are taken from a private home movie captured on HMS Vanguard, the vessel which took the Royal Family to South Africa in 1947 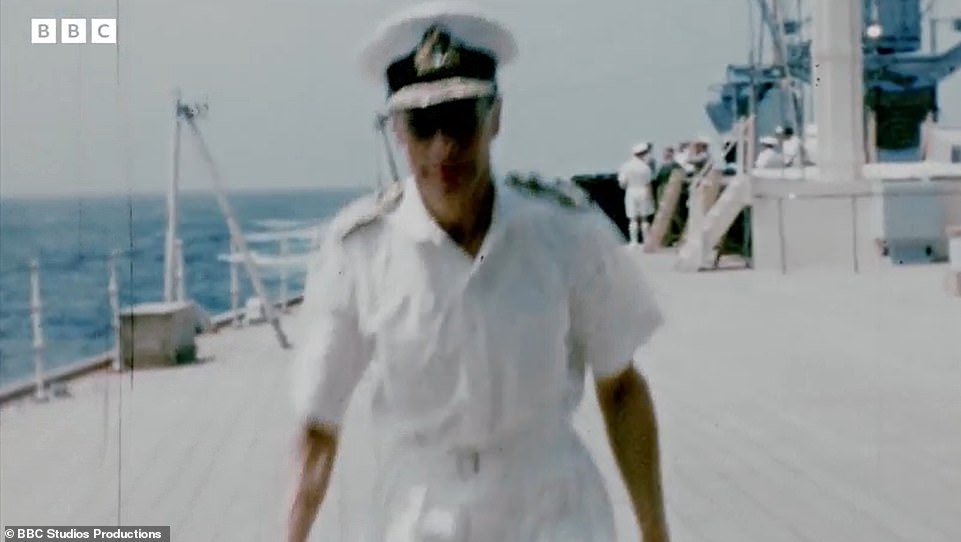 Jovial: George VI, dapper in his sailor whites, strides across the deck before staring into the lens, pictured. Elsewhere Queen Elizabeth, the Queen Mother, is seen soaking up the sun 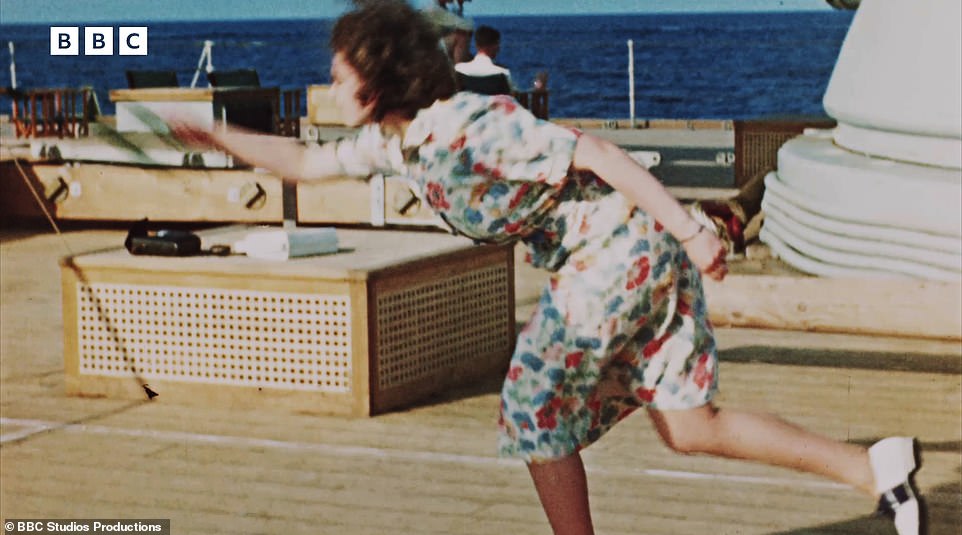 R&R: George VI’s close relationship with his eldest daughter is glimpsed in an impromptu game of throw and catch 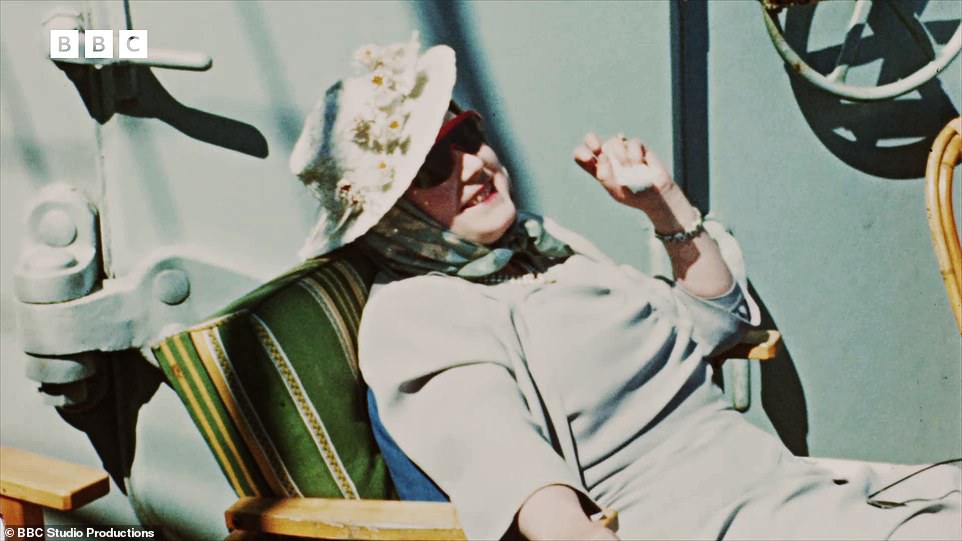 Soaking up the sun! Queen Elizabeth, the Queen Mother, relaxes on deck on the family’s journey to South Africa in 1947

One clip shows a carefree young Princess Elizabeth paddling in a loch and playing with her corgi at Balmoral.

The future Queen, then aged 12, skims stones, runs around with Princess Margaret and looks completely carefree.

Photos show the Princesses playing on the shores of Loch Muick and the Glas-allt-Shiel waterfall with her father George VI strolling with the family’s Labrador.

Another clip shows the King smiling alongside his daughters Elizabeth and Margaret on HMS Vanguard, the vessel which took the Royal Family to South Africa in 1947. 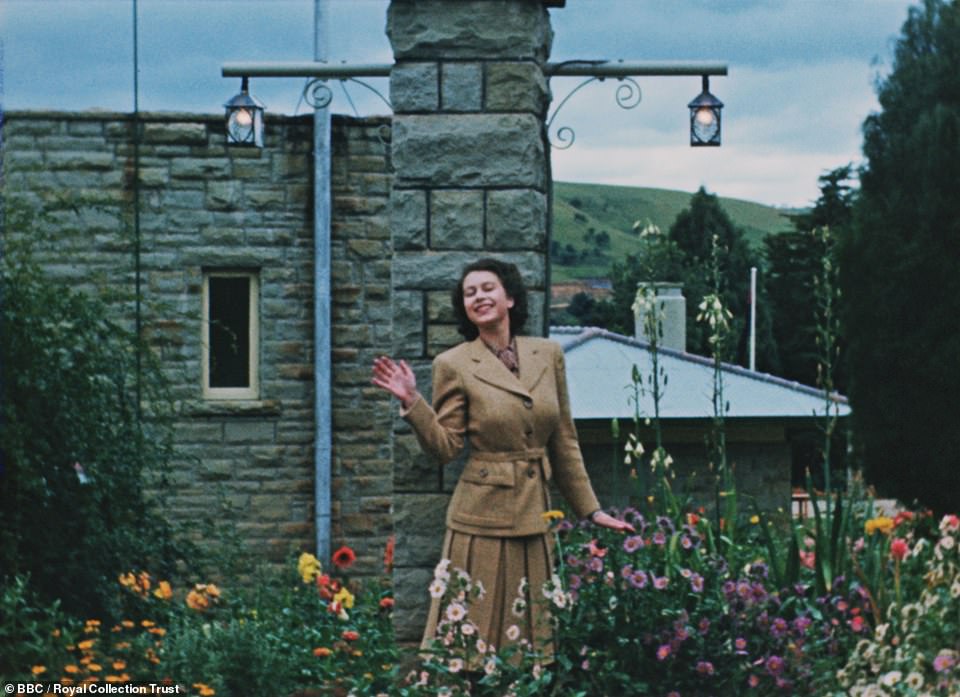 Strike a pose! Elizabeth in South Africa in March 1947 during a three day break from official duties at Royal Natal National Park 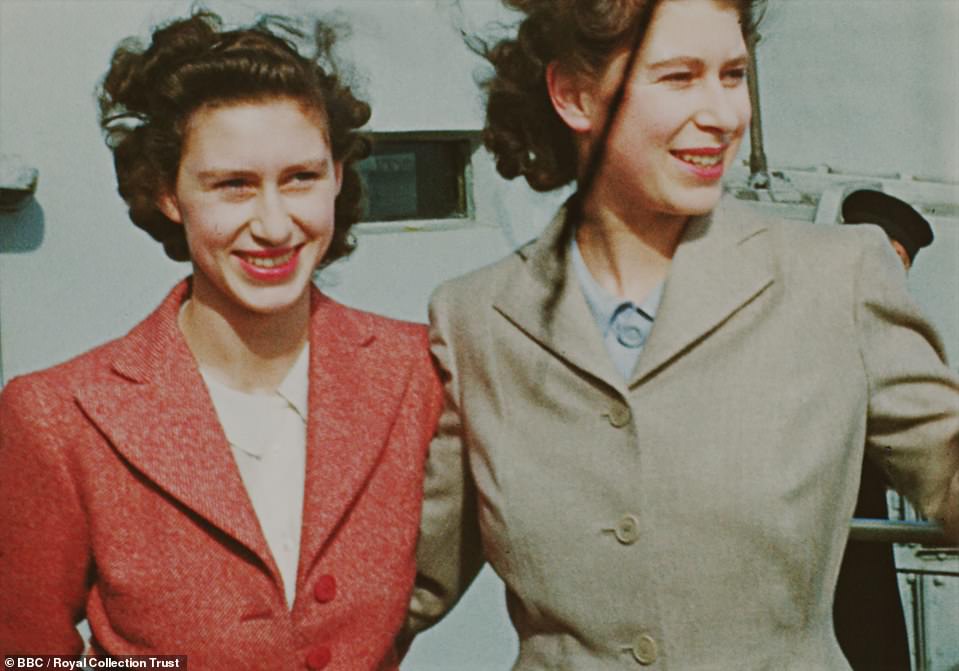 Close bond: The home movies also capture the Queen’s close relationship with her sister Margaret, pictured together in 1947 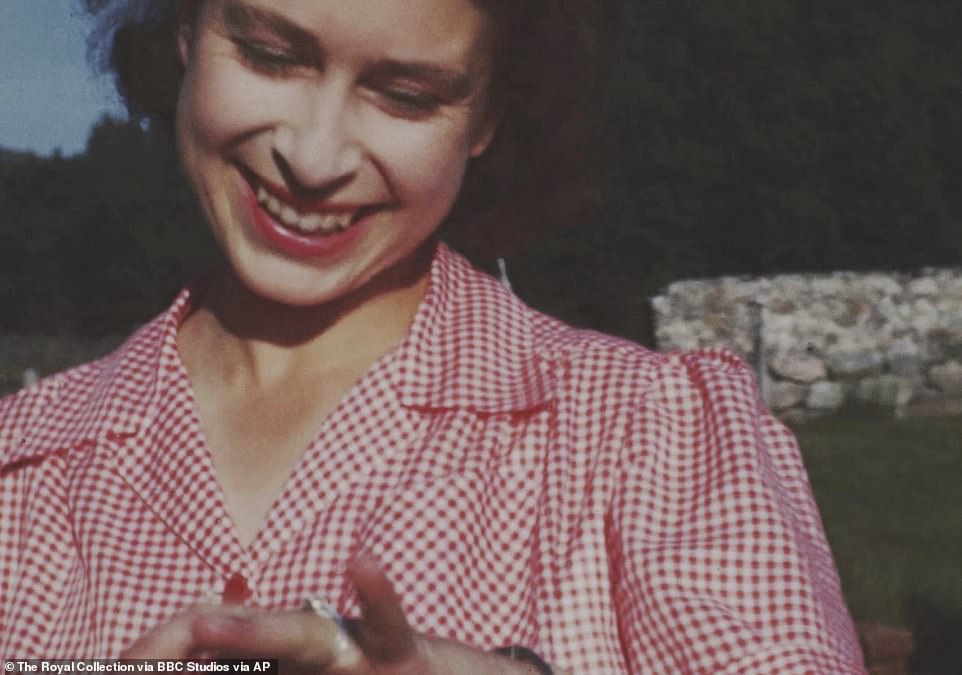 Blushing bride-to-be! The documentary also features never-before-seen images of Her Majesty, including this one of her admiring her engagement ring shortly after Prince Philip’s proposal at Balmoral in 1946 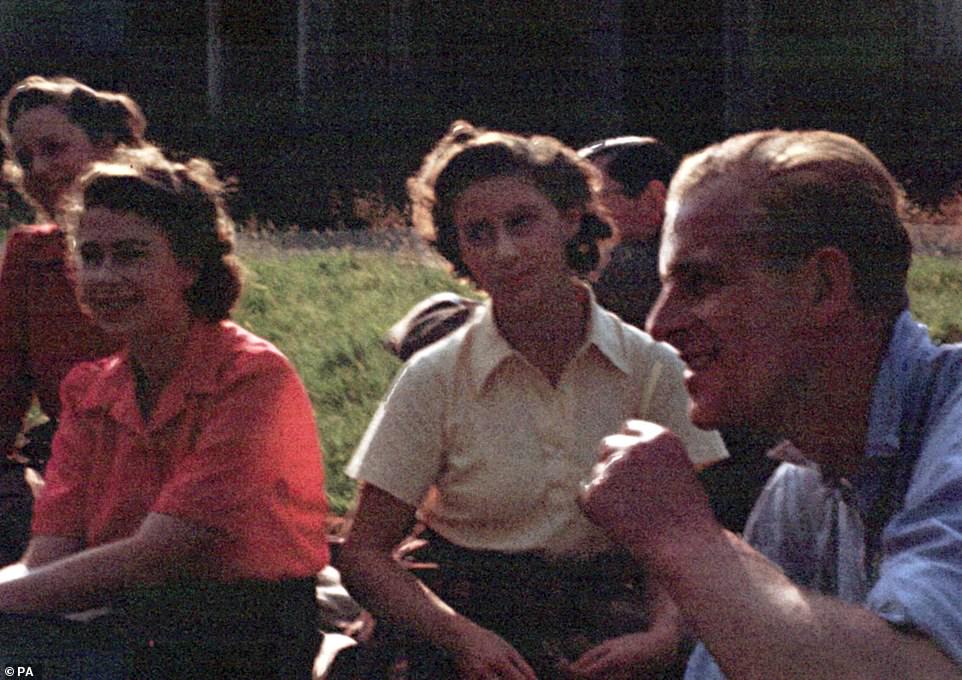 Precious moments: Princess Elizabeth, left, relaxes with Prince Philip and Princess Margaret in the grounds of Balmoral in 1947. It is one of the intimate moments to be shown on Elizabeth: The Unseen Queen, which airs on BBC One on May 29 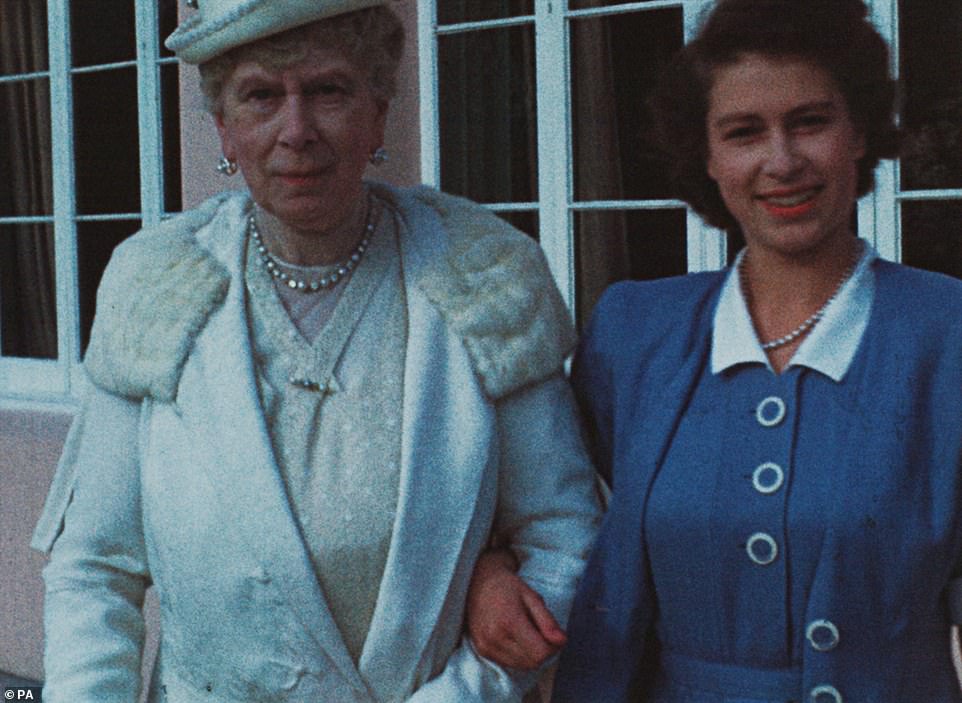 The princesses, both wearing pretty tea dresses with cardigans, chat happily with their father as the camera rolls.

George VI’s hands-on approach extended to his grandchildren, with clips showing him playing with Charles and Anne before his death.

The footage also captures the first extended visit of Prince Philip to Balmoral in 1946 while the couple’s engagement was still not public – a beaming Princess Elizabeth showing the camera her engagement ring.

The documentary kicks off a week of celebrations as the Queen prepares to formally mark 70 years on the throne.

Elizabeth: The Unseen Queen is available to watch on iPlayer