Sandy Hook Elementary School shooting victims’ relatives commemorated the seventh anniversary of the mass shooting with tributes to their slain loved ones and reminders that it ‘could happen to a kid you love’.

Twenty of the victims were children between the ages of six and seven years old.

Marie-Claude Duytschaever used her blog, Farine: Crazy for Bread, to share a lengthy and emotional post about her six-year-old grandson, Noah Pozner, who was killed.

In it she said: ‘What happened to Noah and nineteen other first graders in a peaceful little New England town ten days before Christmas seven years ago could happen to a kid you love,’ she added. ‘To your kid. To your grandkid. Today. Tomorrow. Anytime. Anywhere.’ 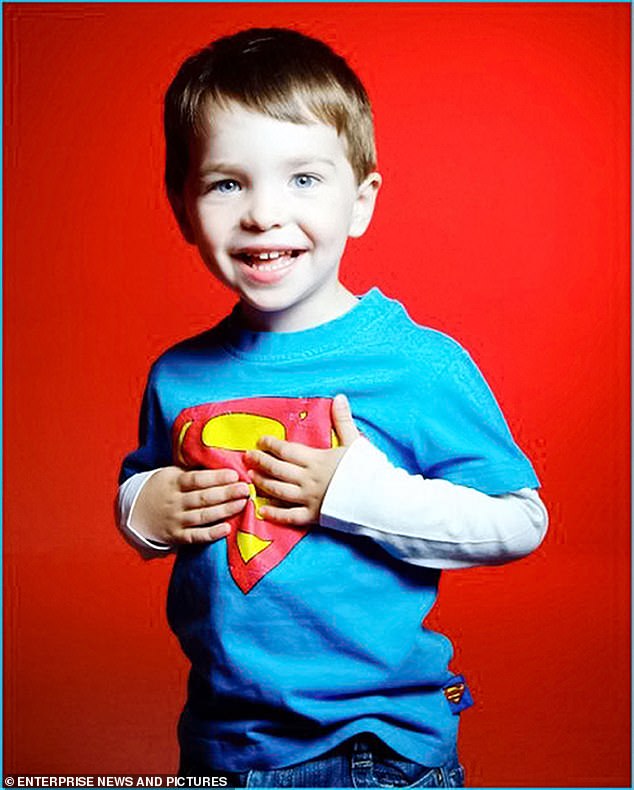 Sandy Hook mom Nicole Hockley penned a series of tweets recounting what happened the morning her six-year-old son, Dylan (pictured), who was killed seven years ago 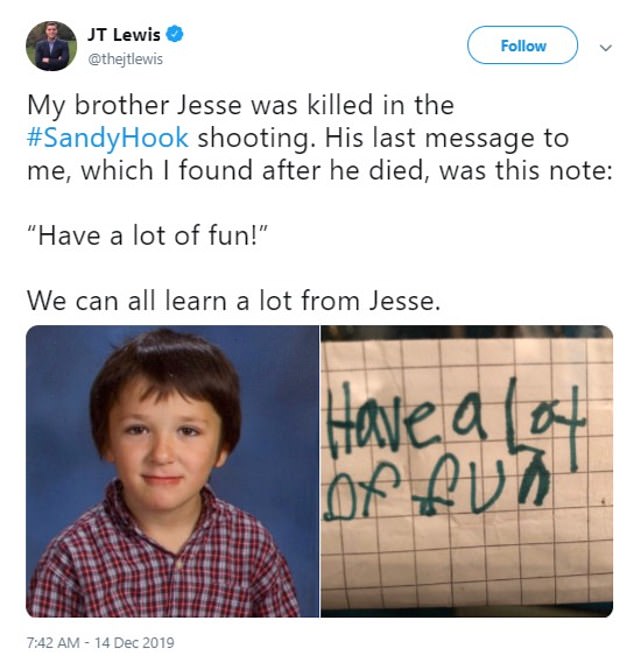 JT Lewis, 19, posted a picture of his six-year-old brother, Jesse (pictured), and the last note the first grader wrote to him before being killed during the Sandy Hook mass shooting 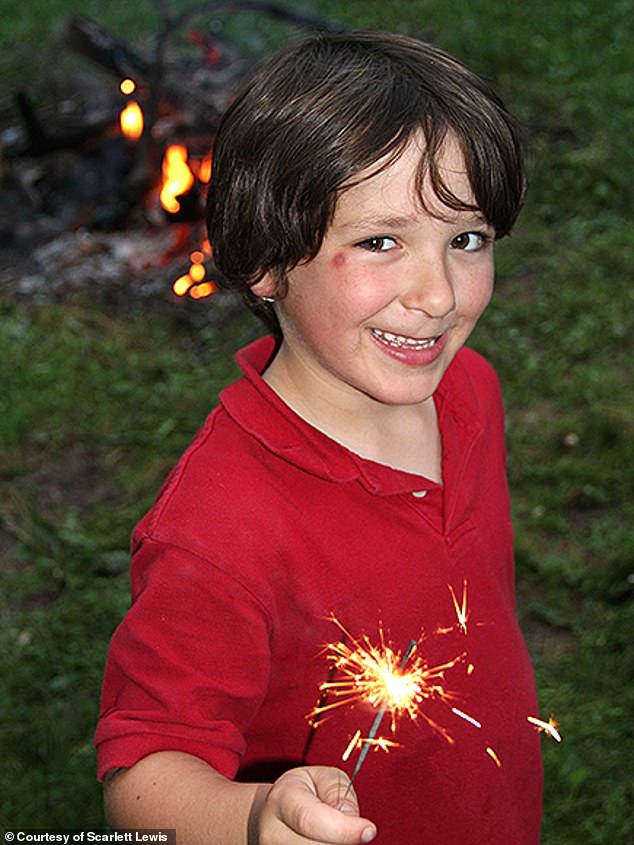 Jesse Lewis (pictured) urged his classmates to run from the shooter, who had just shot their teacher, while he was reloading his gun. The shooter killed Jesse before he could escape

Duytschaever wrote in the opening line of the blog post: ‘It has been seven years. Noah has now lived longer in our memories than in the flesh.’

She recounted the last time she saw Noah alive, via a Skype call, and flying from her home in Seattle to Newtown on the night of the shooting to be with her family.

‘After seven years, Noah hasn’t become an abstraction. I think about him every day of my life and I watch him grow. He was six when I last saw him. He’d be thirteen today,’ she wrote.

‘Everywhere I go, I see the gleam of his pensive, luminous and mischievous eyes. There is nothing creepy about it, Noah isn’t a ghost, he is a presence. And a comforting one. Even the grief is welcome. If it had started to assuage, then it would mean I would have started to forget. There is no chance of that.’

She noted that ‘gun violence is ‘Not an abstraction. Not a statistic.

‘I don’t know how to prevent it. But I know we can’t just sit tight and hold our breath. Or stick our heads in the sand.

‘On this seventh anniversary of the mass murder at Sandy Hook Elementary school and in memory of Noah, of his classmates and of his educators, I beg you to consider doing something if you do not do so already.’

Other relatives of victims also marked the sad anniversary with emotional posts on social media and in their personal blogs.

Mom Nicole Hockley penned a series of tweets recounting what happened the morning her six-year-old son, Dylan, was killed.

‘Seven years ago started as a normal Friday morning,’ Hockley tweeted. ‘After getting Dylan and Jake on the bus, I did chores until I left for an exercise class. While driving to class, I felt a sharp pain in my stomach, so bad that I almost pulled over to the side of the road, convinced I was going to be ill. It quickly passed.

‘Looking back, I still wonder about that moment. Was it my imagination? A woman’s intuition? Or did I feel the moment my 6-year-old son’s life was taken, shot five times in his first-grade class at Sandy Hook School?’

Hockley went on to detail how she found out about the shooting, the elation she felt at finding her then eight-year-old son alive and the ‘agony’ of having to wait to find out about Dylan.

‘Seven years ago started as a normal Friday morning. And nothing has ever been normal since,’ tweeted Hockley, who is now a managing director at non-profit, anti-gun violence sandyhookpromise.org. 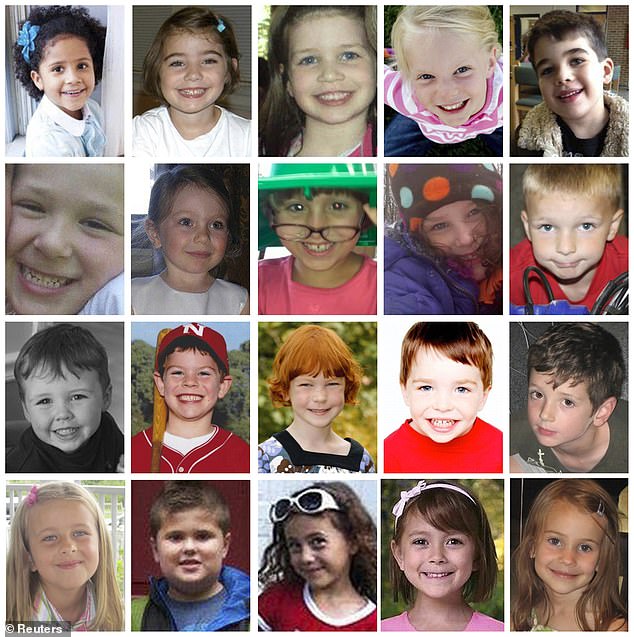 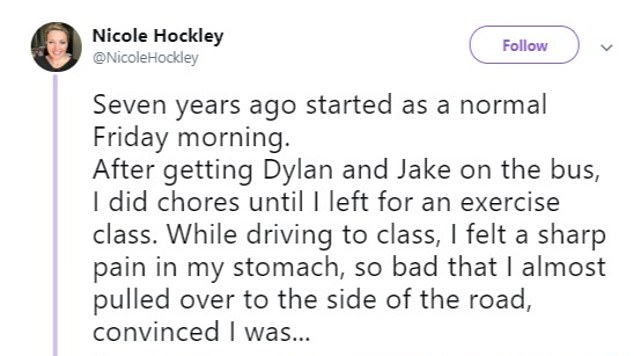 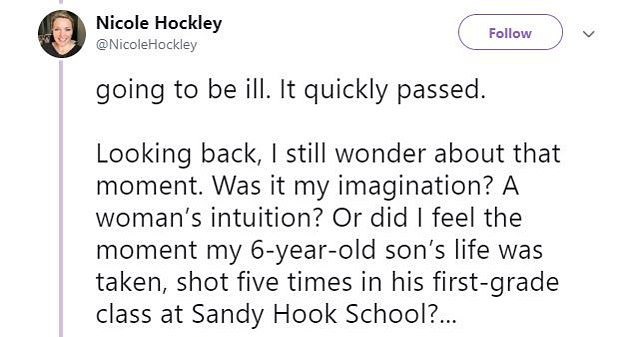 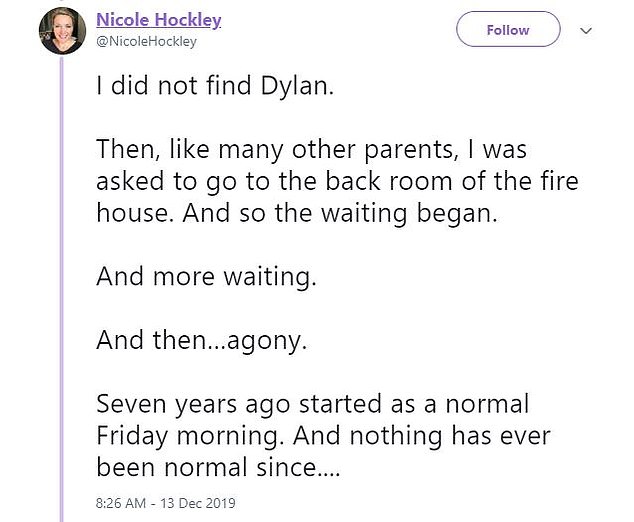 Nicole Hockley posted this series of tweets about the day her son Dylan, six, was killed 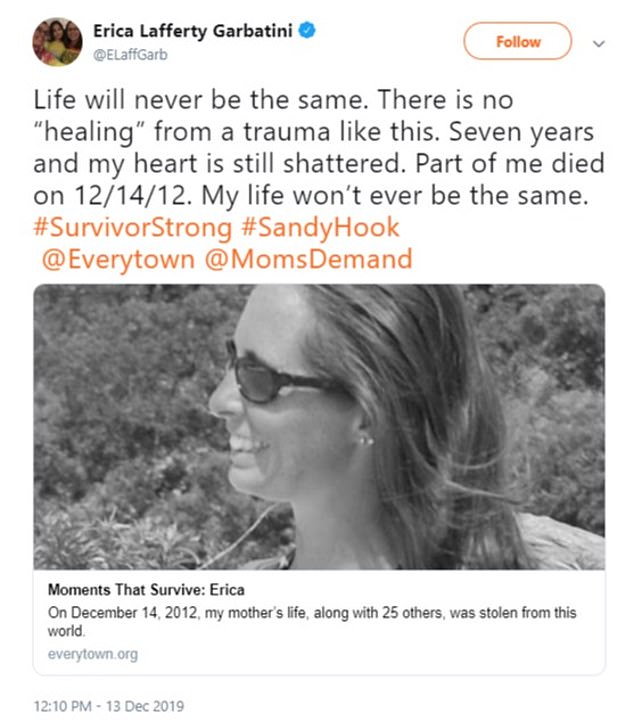 The daughter of Sandy Hook principal Dawn Lafferty Hochsprung (pictured) posted this tweet about her mother, who was killed during the shooting 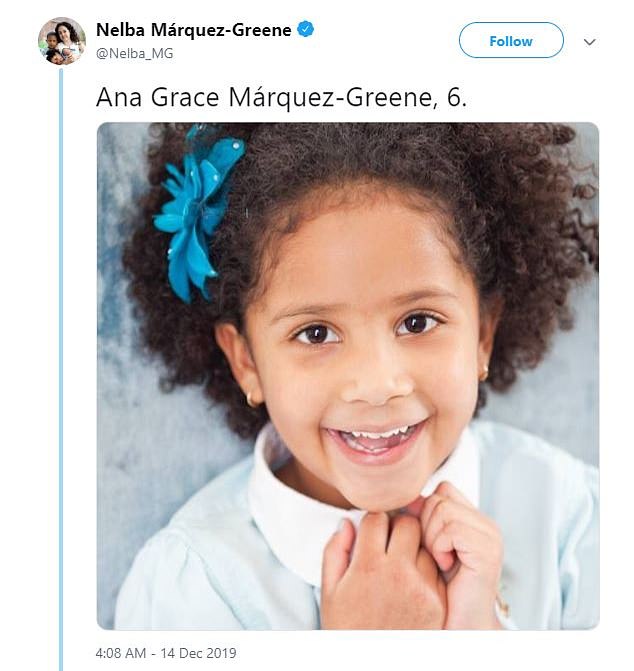 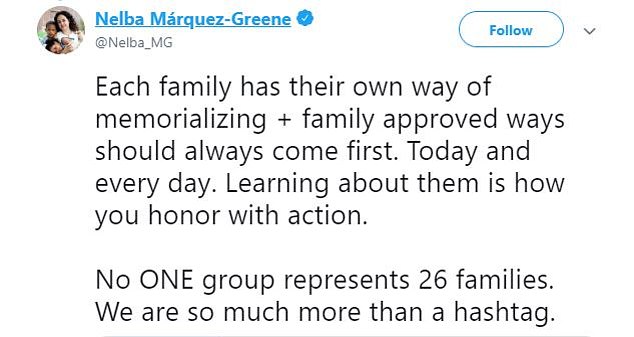 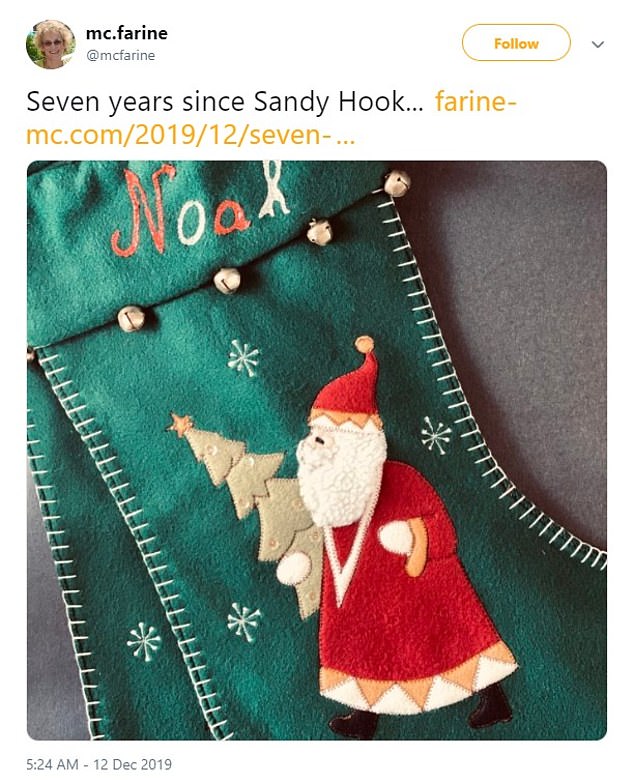 Marie-Claude Duytschaever, the grandmother of Noah Pozner, six, who was killed, posted a picture of his Christmas stocking and a lengthy and emotional blog post about her grandson

‘This is why we do what we do at Sandy Hook Promise and Dylan’s Wings of Change. This is a story no parent should need to tell. This unbearable grief is one that families should not feel. Children should be included, protected and safe.’

She then followed it up with a tweet stating: ‘Each family has their own way of memorializing + family approved ways should always come first. Today and every day. Learning about them is how you honor with action. No ONE group represents 26 families. We are so much more than a hashtag.’

JT Lewis, a school safety advocate who is running for a Connecticut state Senate seat, tweeted a tribute to his six-year-old brother, Jesse, who also died during the shooting.

‘My brother Jesse was killed in the #SandyHook shooting,’ Lewis, 19, wrote. ‘His last message to me, which I found after he died, was this note: “Have a lot of fun!” We can all learn a lot from Jesse.’

The tweet included a school photo of Jesse and the handwritten note.

His mother, Scarlett Lewis, said investigators told her that during the shooting, Jesse saw his teacher being shot, which led him to tell the other students to run from the shooter while he was reloading his gun. The shooter shot Jesse in the head before he could escape. 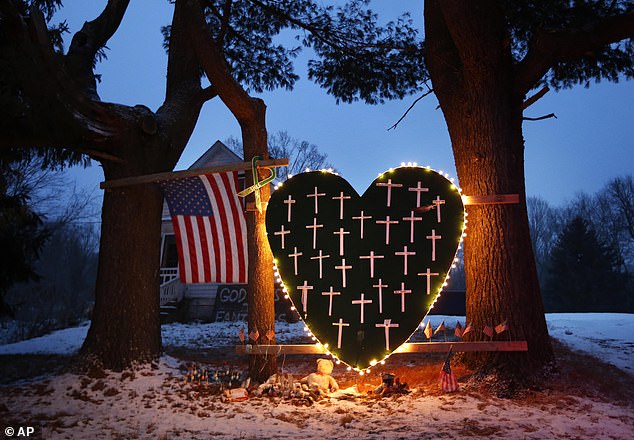 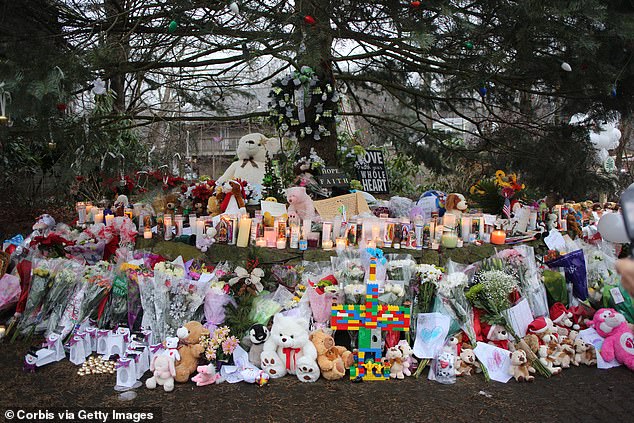 The shrine that was set up to the victims of the shooting around the Newtown Christmas tree, just two days after the shooting took place in 2012 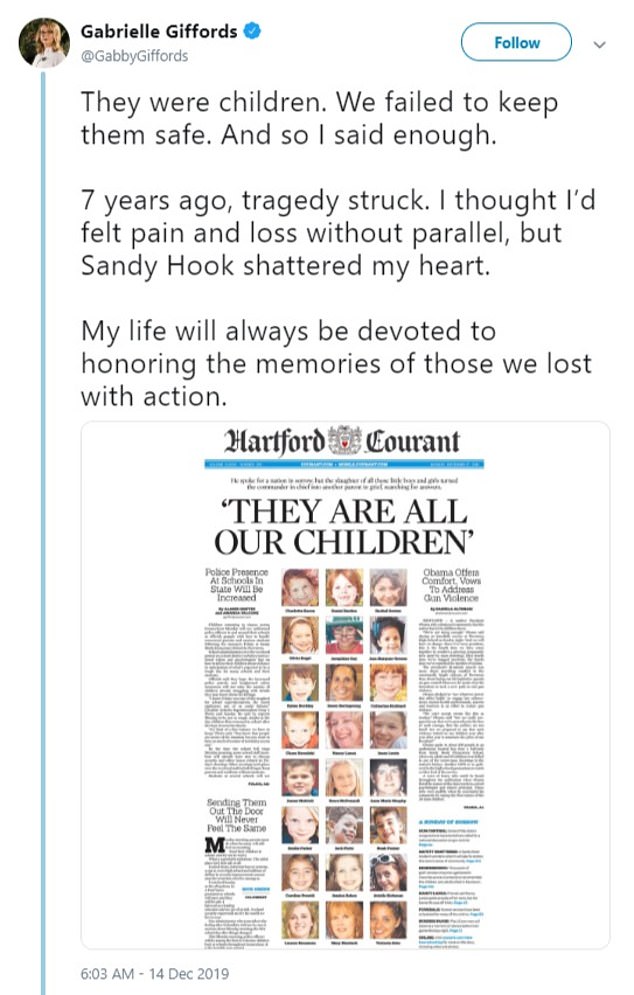 Former congresswoman Gabrielle Giffords, who was shot in the head during a 2011 incident that wounded 11, also posted a tribute to the Sandy Hook shooting victims 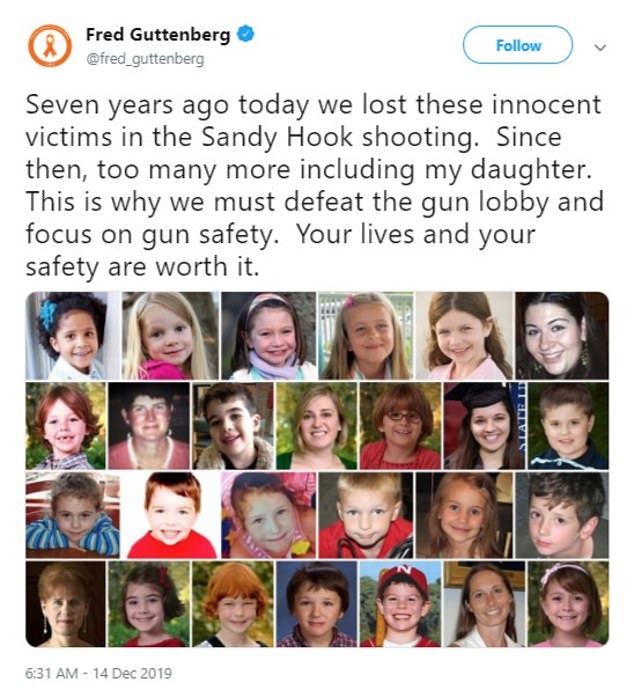 Sandy Hook principal Dawn Lafferty Hochsprung’s daughter posted a tweet in memory of her mother, who died at age 47 that day.

‘Life will never be the same,’ Erica Lafferty Garbatini tweeted. ‘There is no “healing” from a trauma like this. Seven years and my heart is still shattered. Part of me died on 12/14/12. My life won’t ever be the same.’

Among the many others who tweeted about the Sandy Hook mass shooting anniversary were other survivors and relatives of shootings around the country. 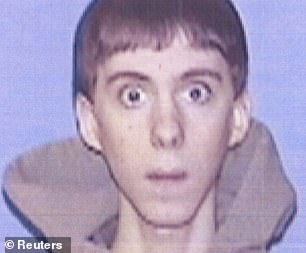 Fred Guttenberg, the father of 14-year-old Jaime Guttenberg, who was killed in the Parkland, Florida, Stoneman Douglas High School shooting in 2018, tweeted out a collage image of all the victims of the Sandy Hook shooting.

He urged people to ‘defeat the gun lobby and focus on gun safety. Your lives and your safety are worth it.’

Former congresswoman Gabrielle Giffords – who was shot in the head in a 2011 incident in Tucson, Arizona, which left 12 other wounded – also tweeted about the Sandy Hook anniversary.

She posted a picture of the front page of the Hartford Courant, which featured pictures of all the victims, and wrote: ‘They were children. We failed to keep them safe. And so I said enough.’

Giffords went on to state that ‘7 years ago, tragedy struck. I thought I’d felt pain and loss without parallel, but Sandy Hook shattered my heart. My life will always be devoted to honoring the memories of those we lost with action.’