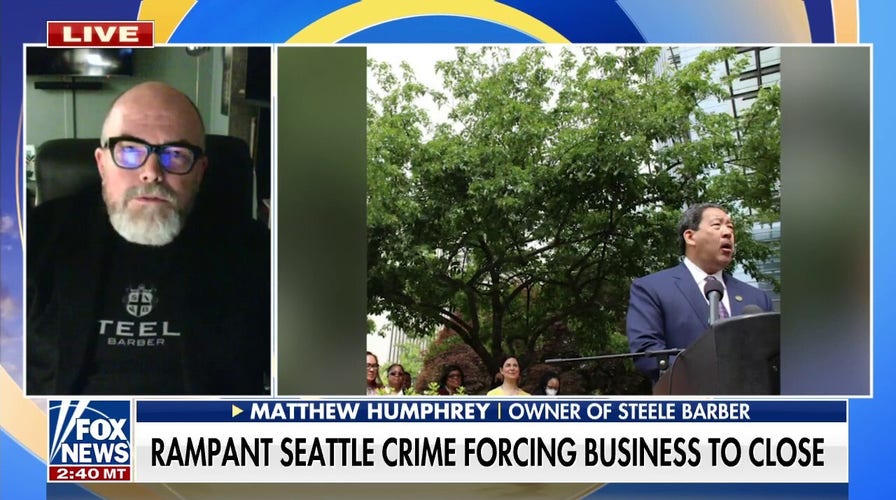 Owner of Steele Barber Matthew Humphrey on the rising crime affecting Seattle small businesses and the Starbucks locations that shutdown over crime concerns.

Business and property owners in Seattle are installing 1-ton concrete blocks on city streets to prevent RVs and homeless encampments from forming or returning to an area.

Anonymous Seattleites have hauled the massive 1 to 2-ton blocks – known as “ecology blocks” or “eco blocks” – using special equipment outside residential areas and in front of businesses to prevent RVs from parking and homeless encampments from forming.

Seattle has struggled with homelessness issues for years, which only worsened during the pandemic. Seattle and King County ranked as the third area in the nation with the most homeless people in 2020, recording roughly 11,700 people living on the streets. Washington state ranks fifth across the country for its homeless population, at 30 people per 10,000 residents.

Encampments in Seattle and in its county grew during the pandemic, with a 50% increase in tents in the city’s urban center, according to a previous Seattle Times report. Data from the King County Regional Homelessness Authority reported that roughly 13,368 people were homeless in 2022, up nearly 14% since 2020 numbers.

Large vehicles such as RVs are only allowed to be parked in industrial zoned areas of the city, but the city paused parking enforcement during the pandemic. Anonymous individuals then proceeded to install more eco-blocks in front of businesses and homes, most notably in the neighborhoods such as Georgetown, Ballard and Sodo, The Seattle Times reported.

Just in June, a local health club in the city alerted followers and members on social media that the gym would install eco-blocks near its building once a homeless encampment was cleared by the city.

Safety for patrons and employees is often a top concern for business owners, while businesses are also worried about losing their livelihoods if they install the blocks, the executive director of the Sodo Business Improvement Area, Erin Goodman, told The Seattle Times.

Having a business near a homeless encampment includes additional stressors and liabilities, according to Goodman. Encampments can attract rats that could hurt food manufacturers and restaurants, while fires started at homeless encampments and RVs could damage retail buildings. 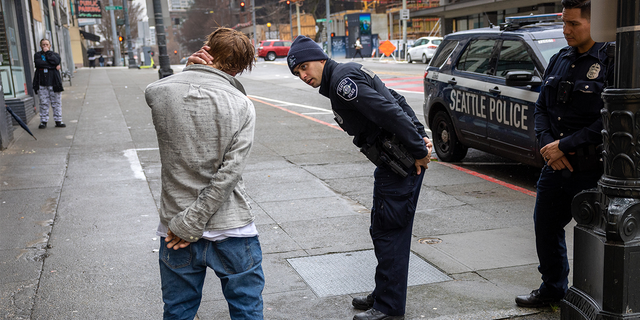 SEATTLE, WASHINGTON – MARCH 14: Police officers check on a man who said he has been smoking fentanyl in downtown Seattle on March 14, 2022, in Seattle, Washington. (John Moore/Getty Images)

Crime has also skyrocketed in Seattle since 2020, when the pandemic upended society and protests and riots swept the nation following the death of George Floyd. Murders spiked by 61% in 2020 compared to 2019, notching the highest number of murders for the city in 26 years. As of April of this year, violent crime was up 32% compared to 2021, previous reports found.

Georgetown business owner JW Harvey told the outlet that he has resisted installing eco-blocks due because they would take up public parking and look ugly, but the “ripple effects” of working near the encampments has drained him.

He said that over the last decade, but most notably during the pandemic, he has spent more time talking to those living in the encampments and providing them tools and water than he has actually working. Harvey argued that many business owners feel like the eco-blocks are their only choice to keep the encampments away from their stores, citing that it only takes a couple of weeks for a homeless encampment to return to an area the city had cleared and cleaned.

Installing an eco-block on a city street is illegal, but the city has not forcefully demanded the blocks’ removal, The Seattle Times report shows. There are hundreds of such blocks of the streets of Seattle, but only 25 property and business owners have been warned that they could face fines for not removing the blocks since June 2021. The fines include: a $250 penalty for first offense, $500 for the second and $1,000 for the third violation. There are no limits to how many fines a person or business can receive in a year.

The report notes that none of the 25 people or business owners who received warnings about the blocks received a citation on the matter.

“I don’t think [warnings] are going to deter anybody,” Goodman told the outlet. “They’re still going to do it and even for the period of time before the city notices, they get a bit of relief.”

As parking enforcement in the city resumed this year, homeless outreach advocates claimed that it’s unfair homeless people are facing fines for parking in restricted areas while people who install the blocks are not being patrolled at the same rate.

“The new mayor ran on a law-and-order platform and this is the law,” said Bill Kirlin-Hackett, the director of the Interfaith Task Force on Homelessness, told The Seattle Times. “We just find it to be quite hypocritical.”

One man who has lived out of his RV for six years told the outlet that the eco-blocks are symbols of hatred towards homeless people. 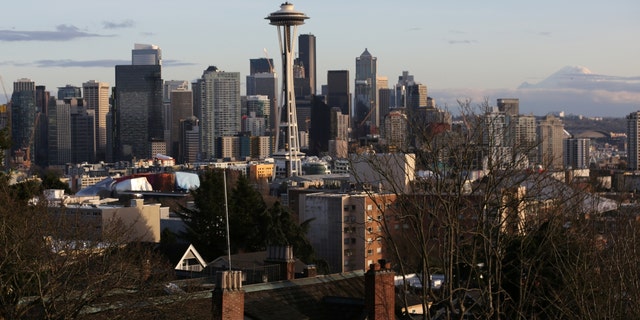 The Space Needle and Mount Rainier are seen on the skyline of Seattle, Washington, U.S. February 11, 2017. (REUTERS/Chris Helgren)

“So much of the community has so much built-up hatred against us,” Garth Caroll said. “We’re just trying to fend for ourselves until we can get some permanent housing.”

The city cited difficulty in determining who is responsible for the eco-blocks on the streets when responding to complaints, as they are often anonymously dropped in areas encompassing multiple businesses or homes. The Seattleites who install the blocks often do so right after members of Seattle Public Utilities ask RVs to move off a street in order for them to clean.

The city said it does respond to public complaints about ecology blocks, but it does not have workers “continuously patrol the city looking for violations.” The matter also comes down to costs of moving the massive blocks. The city has contracts with towing companies to remove vehicles in illegal areas, but not to remove the eco-blocks.

Seattle Mayor Bruce Harrell’s office and the Seattle Department of Transportation did not immediately respond to Fox News Digital’s requests for comment.