Seattle Public Schools and the Seattle Education Association said the groups reached a tentative deal late Monday after a strike over pay and classroom support.

“Seattle Public Schools (SPS) and the Seattle Education Association (SEA) have come to a tentative agreement on the educators’ contract,” the school district said in a statement. “For now, the details of the tentative agreement are confidential. SEA members will review the proposed contract and vote tomorrow on whether to lift the strike.”

SPS thanked both teams for their efforts to come to a resolution, saying that a school start date had not yet been determined.

“A special thank you to our educators who are the backbone of our school district,” it said. “They work hard every day supporting our students and families. We are proud to move in a direction that will better meet the needs of our students and staff.” 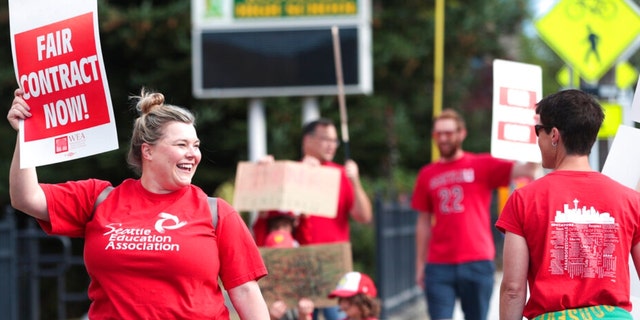 Lucy Magidman, wife of teacher Michael Magidman, shows her support as teachers from Seattle Public Schools picket outside Roosevelt High School on what was supposed to be the first day of classes, Wednesday, Sept. 7, 2022, in Seattle.  (AP Photo/Jason Redmond)

“We are excited to announce we have achieved a Tentative Agreement (TA) with Seattle Public Schools. Our solidarity on the picket lines and the enormous community support we received made all the difference. We should all be proud of what we accomplished and what we stood up for: student supports and respect for educators,” the SEA wrote, stating the agreement was for a three-year contract with Special Education ratios maintained and improved, adding baseline mental health staffing in all schools and raises above Implicit Price Deflator every year.

“Ratifying the TA is part of our democratic union processes and to respect members’ voices we are keeping the TA among members only until it is ratified,” the union added, noting that the contract negotiation is just one step to “achieve the schools we all deserve.” 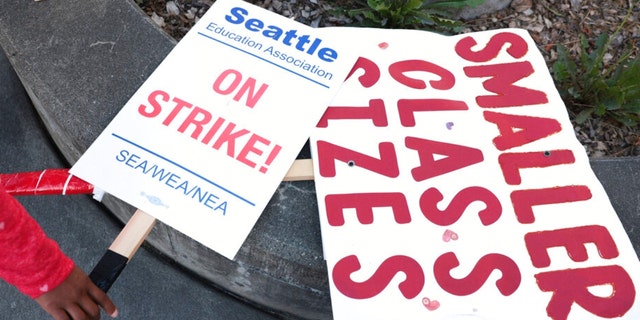 A sign is picked up as teachers from Seattle Public Schools picket outside Roosevelt High School on what was supposed to be the first day of classes, Wednesday, Sept. 7, 2022, in Seattle.  (AP Photo/Jason Redmond)

There was no school scheduled for Tuesday and a general membership meeting – and an update on the tentative agreement by the SPS – was scheduled. 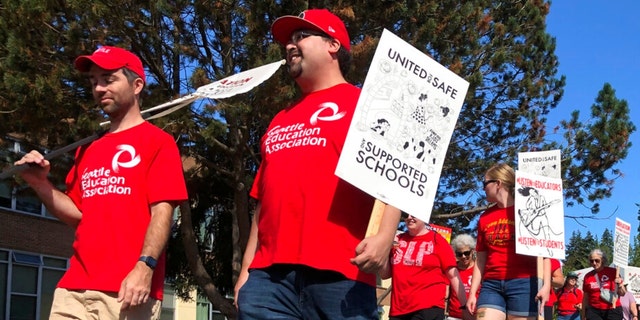 Teachers and staff from Jane Addams Middle School in north Seattle picket on what was supposed to be the first day of classes Wednesday, Sept. 7, 2022.  (AP Photo/Gene Johnson)

The school district had previously offered pay raises of an additional 1% above the 5.5% cost-of-living increase set by state lawmakers – far less than the 6,000-person union wanted – as well as one-time bonuses for certain teachers, including $2,000 for third-year Seattle teachers earning an English language or dual-language endorsement.

While teachers there had seen healthy raises since their last strike in 2015, the union said it is primarily focused on winning raises for its lower-paid members. 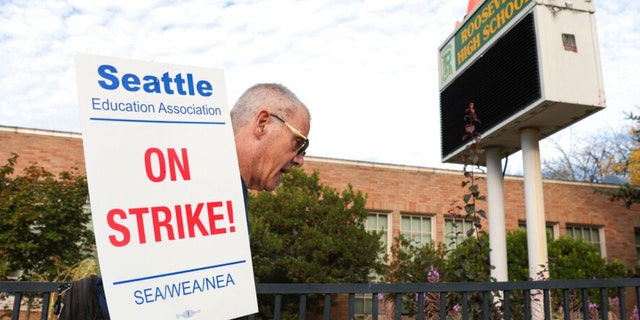 Math teacher Royce Christensen pickets outside Roosevelt High School on what was supposed to be the first day of classes as teachers from Seattle Public Schools go on strike, Wednesday, Sept. 7, 2022, in Seattle.  (AP Photo/Jason Redmond)

The SEA also said it was opposed to the district’s efforts to eliminate staffing ratios for special education students.