Senate Democrats and Republicans are at odds over how the Inflation Reduction Act of 2022 will impact the American economy as the midterm elections rapidly approach.

The measure — a watered down version of Build Back Better — was agreed upon by Sen. Joe Manchin, D-W.Va., and Senate Majority Leader Chuck Schumer on Wednesday.

According to Schumer’s and Manchin’s offices, the bill will raise $739 billion in revenue through IRS tax enforcement, the corporate minimum tax and closing the carried interest loophole. It will spend $433 billion total, they said, on energy and climate change provisions and on the Affordable Care Act extension. 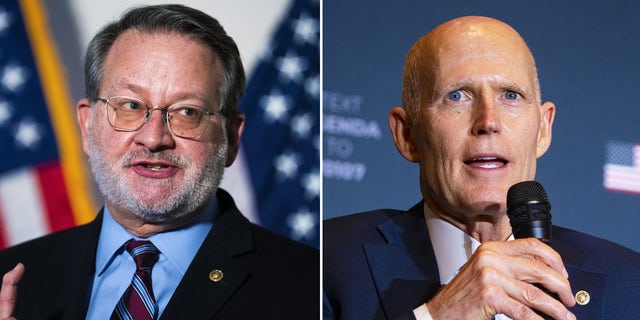 “There’s no question we must do more to lower costs for Michigan and American families,” Peters said. “The Inflation Reduction Act would do just that by helping fight inflation, reduce prescription drug and health care costs and address climate change. This legislation would reduce the deficit, while allowing us to make critical investments in domestic clean energy production and manufacturing. I’m also pleased it includes an electric vehicle tax credit, which is important for our economy, innovation and to consumers.”

Peters also said the legislation would “give families more breathing room and tackle the climate crisis,” as well as create “good-paying jobs and economic opportunity.”

“It would both provide relief for Michiganders now and help position us for a stronger future, including for Michigan workers and auto manufacturers,” Peters added. “The future of the auto industry is electric and autonomous, and this will support jobs at home and shore up domestic manufacturing.” 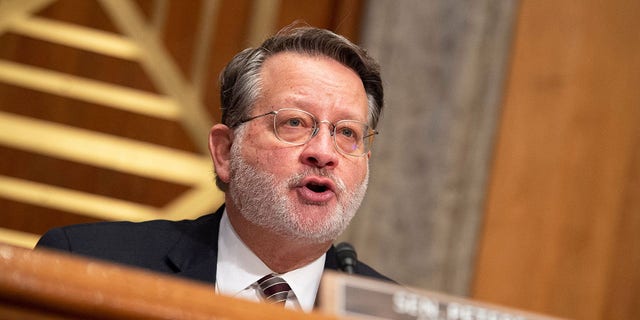 Chair of the Democratic Senatorial Campaign Committee Sen. Gary Peters, D-Mich., speaks during a hearing at the US Capitol in Washington, DC on February 1, 2022. (BONNIE CASH/POOL/AFP via Getty Images)

In contrast, Sen. Rick Scott, R-Fla., in a statement to Fox News Digital on Thursday, accused the Democrats of pushing “reckless spending” and claimed that President Biden has “officially plunged America into a recession.”

“Joe Biden has officially plunged America into a recession and how do Democrats in Congress respond? With MASSIVE SPENDING and even more RECKLESS SPENDING,” Scott said. “It’s insane and what’s worse is that we got to this point with bipartisan bad decisions. Yesterday’s announcement by Joe Manchin and Chuck Schumer showed again that too many Senate Republicans unfortunately trusted Democrats and got duped. Some are pretending to be shocked. It’s not shocking at all.”

“Democrats have never met a tax increase they didn’t like and Joe Manchin is a Democrat,” Scott added. “Of course Manchin is going along with Schumer, Biden and Pelosi to push MASSIVE tax increases on Americans as we face 9.1% inflation, debt over $30 TRILLION and enter a RECESSION. This is yet another failure by too many politicians in Washington to stand up against reckless spending and fight for real accountability for American families. Democrats are destroying this country, and Republicans CANNOT continue to endorse their reckless, inflation-fueling spending.”

Scott, who serves as chair of the National Republican Senatorial Committee, insisted that Democrats will now divert attention from the economic issues facing Americans by claiming the country is not in a recession and that the Manchin-approved measure will lower inflation. 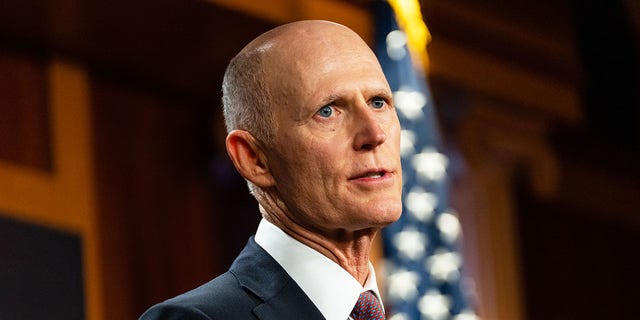 Senator Rick Scott, chair of the National Republican Senatorial Committee, speaks during a news conference at the US Capitol in Washington, D.C., US, on Tuesday, July 26, 2022. (Eric Lee/Bloomberg via Getty Images)

“Now, Democrats will do two things: they’ll say that the U.S. isn’t in a recession and that their new, partisan tax-and-spending spree will reduce inflation. IT’S ALL LIES,” Scott said. “Joe Biden’s Recession has begun and more spending will NEVER equal less inflation. It’s time for Republicans and Democrats in Washington to wake up and stop endorsing reckless, inflation-fueling spending that is crushing American families.”

Gross domestic product (GDP), the broadest measure of goods and services produced across the economy, shrank by 0.9% on an annualized basis in the three-month period from April through June, the Commerce Department said in its first reading of the data on Thursday. Refinitiv economists expected the report to show the economy had expanded by 0.5%.

Economic output fell over the first three months of the year, with GDP tumbling 1.6%, the worst performance since the spring of 2020 when the economy was still deep in the throes of the COVID-induced recession.

Recessions are technically defined “a significant decline in economic activity that is spread across the economy and lasts more than a few months,” and are characterized by high unemployment, low or negative GDP growth, falling income and slowing retail sales, according to the National Bureau of Economic Research (NBER), which tracks downturns.