Vessels off the East Coast must slow down more often to help save a vanishing species of whale from extinction, the federal government said Friday.

The National Oceanic and Atmospheric Administration made the announcement via new proposed rules designed to prevent ships colliding with North Atlantic right whales. Vessel strikes and entanglement in fishing gear are the two biggest threats to the giant animals, which number less than 340 and are falling in population.

Efforts to save the whales have long focused on fishing gear, especially that used by East Coast lobster fishermen. The proposed vessel speed rules signal that the government wants the shipping industry to take more responsibility.

“Changes to the existing vessel speed regulation are essential to stabilize the ongoing right whale population decline and prevent the species’ extinction,” state the proposed rules, which are slated to be published in the federal register.

The new rules would expand seasonal slow zones off the East Coast that require mariners to slow down to 10 knots (19 kilometers per hour). They would also require more vessels to comply with the rules by expanding the size classes that must slow down. The rules also state that NOAA would create a framework to implement mandatory speed restrictions when whales are known to be present outside the seasonal slow zones.

Federal authorities spent a few years reviewing the speed regulations used to protect the whales. The shipping rules have long focused on a patchwork of slow zones that require mariners to slow down for whales. Some of the zones are mandatory, while others are voluntary.

Environmental groups have made the case that many boats don’t comply with the speed restrictions and that the rules need to be tighter. Environmental organization Oceana released a report in 2021 that said noncompliance was as high as nearly 90% in voluntary zones and was also dangerously low in the mandatory ones. 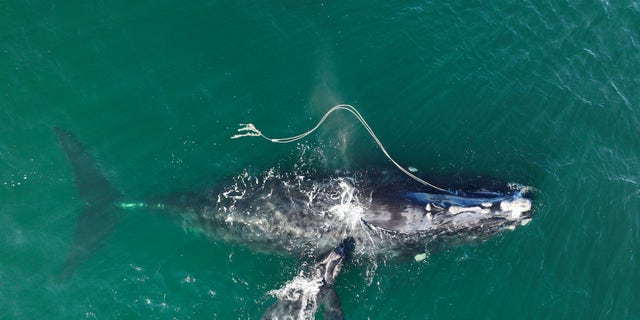 An endangered North Atlantic right whale is entangled in a fishing rope in waters near Cumberland Island, Ga.   (Georgia Department of Natural Resources/NOAA Permit #20556 via AP)

Many members of the shipping industry were keenly aware the new speed rules were on the way. The London-based International Chamber of Shipping, which represents more than 80% of the world merchant fleet, has been working with the International Maritime Organization and other stakeholders to better protect the right whales, said Chris Waddington, the chamber’s technical director.

The chamber’s members are used to complying with speed limits in whale zones, he said.

“The shipping industry takes the protection of whales seriously and has undertaken measures to safeguard them, from engaging stakeholders to reducing speed and rerouting,” Waddington said. “There is always more that can be done, and that is why we are working with the IMO and conservationists on reviewing maritime guidelines.”

The whales were once numerous off the East Coast, but their populations plummeted due to commercial whaling generations ago. Although they’ve been protected under the Endangered Species Act for decades, they’ve been slow to recover.

More than 50 of the whales were struck by ships between spring 1999 and spring 2018, NOAA records state. Scientists have said in recent years that warming ocean temperatures are causing the whales to stray out of protected areas and into shipping lanes in search of food.

Environmentalists have said that’s a good reason to tighten protections. The proposed shipping rules will be subject to a public comment process before they can become law.

“This proposal is a step in the right direction, but it won’t help a single right whale until it’s actually finalized,” said Kristen Monsell, an attorney for environmental group Center for Biological Diversity.

The whales give birth off the coast of Georgia and Florida and head north to feed off of New England and Canada. They’re popular with whale watching tours that leave from places such as Provincetown, Massachusetts, and Portland, Maine, in the summer.

Members of New England’s lobster fishing industry have made the case that too many rules designed to save the whales focus on fishing and not on vessel strikes. Some characterized the new vessel speed rules as overdue.

Fishermen are unfairly being held accountable for whale deaths that occur due to vessel strikes, said Patrice McCarron, executive director of the Maine Lobstermen’s Association, which is the largest fishing industry association on the East Coast.

“This is putting a tremendous amount of pressure on the lobster industry to continue to alter our fishery to account for right whale deaths not connected to the lobster fishery,” McCarron said.