The flames fade away. Firefighters extinguish the last embers. A final curl of smoke uncoils in the wind.

A wildfire in the California wilderness has come to an end, and what’s left behind is a blackened landscape of skeletal pines and leafless oaks, scorched meadows and ashen stumps where saplings once stood.

One year after a wind-whipped wildfire charged across a craggy mountainside above Lone Pine, California, flashes of new growth are emerging in this still-charred corner of the Inyo National Forest, a hiking, camping and fishing playground about 350 miles (563 km) southeast of San Francisco.

Tiny clusters of white and purple wildflowers stand out against denuded pines, many stripped of bark in the fire. Green shoots of horsetail as thin as yarn strands break from the ground below a tree’s barren branches. A fistful of new leaves emerges like a fresh bouquet from within an incinerated stump.

It’s the start of a long recovery, and a cycle that’s being repeated more often across the West as climate change brings drier, hotter seasons and more wildland fires.

As it roars across the landscape, a fire burns at different intensities. Some of the towering trees on the hillside are dead, others only singed and can recover. The first plants to reappear after a burn typically have grown more resistant over time to the flames.

“Some of the shrub species and other grass species are more fire-adapted, and they can come back quicker,” said Todd Ellsworth, a post-fire restoration program manager with the U.S. Forest Service. 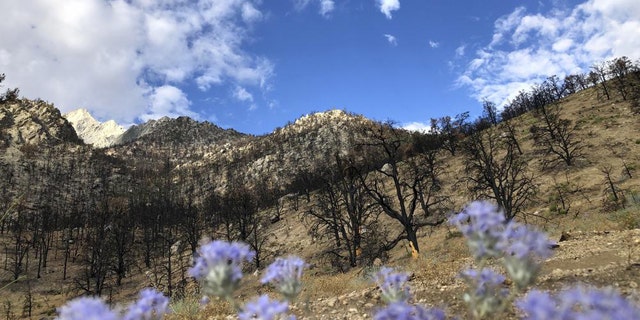 One year after devastating wildfires ravaged California, new vegatation is seen growing amongst the charred remains of a mountainside in Lone Pine, California, on July 27, 2022. (AP Photo/Michael Blood)

But it can be five years before the ground cover returns to what it was before the blaze. One stand of pinyon pines was heavily damaged – needles burned off the branches, their trunks torched black – and will not come back.

“The conifer trees don’t come back very quickly,” Ellsworth said, referring to certain pines and other trees that bear cones. Sometimes, it’s up to foresters to go in and replant them.

The tiny, fragile flowers and patches of fresh growth against a stark mountainside and slabs of gray rock were a reminder that wildfire is part of the ecosystem in California, including the eastern Sierra Nevada where the fire took place.

Firefighters said they used minimum-impact techniques to fight the blaze because “natural fire plays an important role in maintaining the landscape within these areas.”

Some species only flower after a wildfire.

News reports and press releases from June and July 2021 attributed the wildfire to a lightning strike and said the nearly 600-acre (243-hectare) blaze fanned by winds forced evacuations and cut off access to nearby roads, hiking trails and campgrounds. Firefighters used helicopters to dump water on the fire, which burned across rugged terrain.

The effects of climate change can be significant on forest regeneration.

One 2018 study in the journal Ecology Letters that looked at nearly 1,500 wildfire sites found that because of hotter and drier climates, fewer forests are returning to their pre-burn tree mix, and in some cases trees did not return at all.

“We have a lot of places that are probably climatically different than when those (conifer) species were established,” she said, which means they can struggle when trying to recover after a burn.

If a hotter, drier climate is unsuitable for those trees to come back, “they won’t recover,” she added.