Six children and 14 adults were rescued from a St Louis daycare center after it was inundated with four foot floodwaters – and electrical sockets began to spark after the water touched them.

St. Louis firefighters with Company 29 were able to rescue 10 to 20 people, including at adult camp counselors, at the Cornerstone Institutional Baptist Church in what was described by fire spokesman Nick Dunne as ‘thigh-high water.’

A fire department spokesman said six children were rescued, while the others freed were adults.

Photos shared with DailyMail.com showed the center filled with filthy water after the rescue attempt was completed. 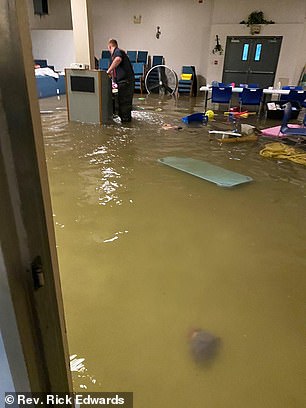 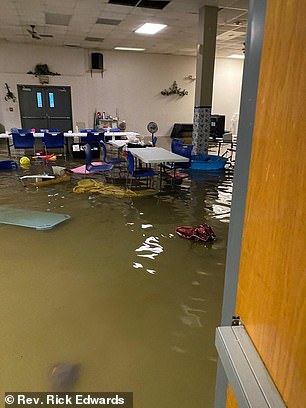 Cornerstone Institutional Baptist Church in St Louis was badly flooded on Thursday, with six children and fourteen adults also rescued from the building, which doubles up as a daycare center 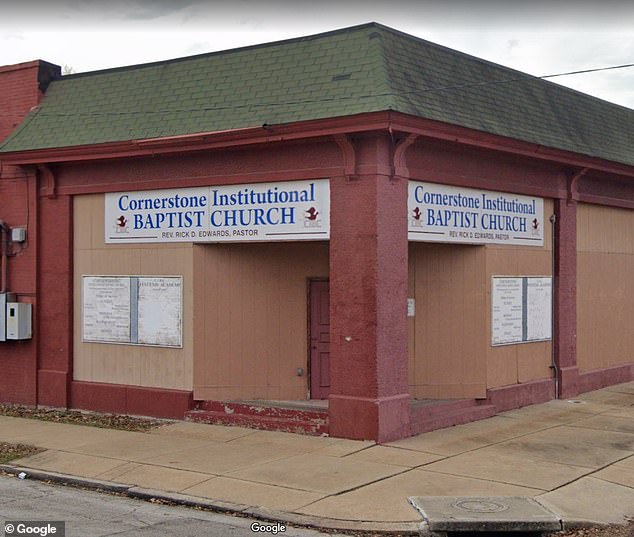 From 10 to 20 people at summer camp were rescued by the St. Louis Fire Department after a flash flood hit the Cornerstone Institutional Baptist Church

‘The water came in pretty fast,’ Edwards said. ‘The water was above the outlet and it started sparking.’

The quick-thinking camp director moved them into a dry area and called the fire department.

He said that no one was hurt, just ‘shaken up a bit.’

It was another close call in a week of rescues as a 100-year storm drenched the area in the dangerous rain. 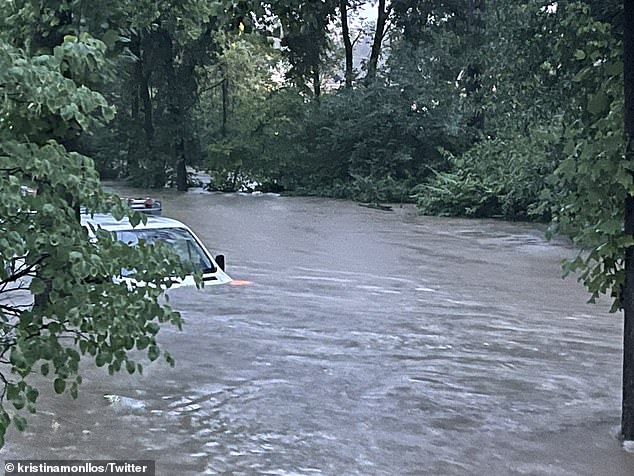 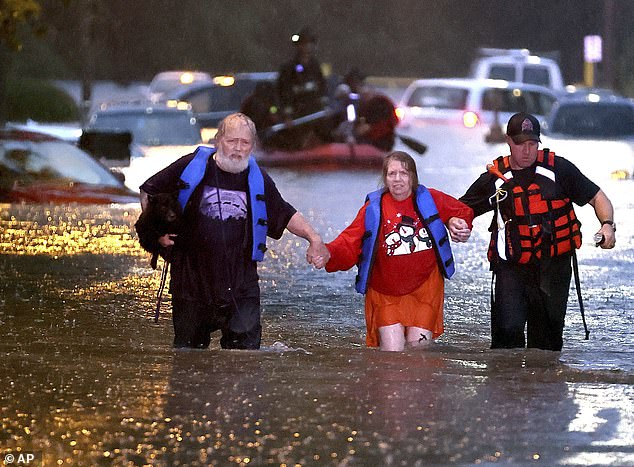 John Ward, left, and a firefighter help Lynn Hartke wade through the flash floodwater on Hermitage Avenue in St. Louis following the severe flooding in the area

Matthew Robinson holds onto his dog, Bebe, as he and his girlfriend Kimberly Tat are rescued from their home 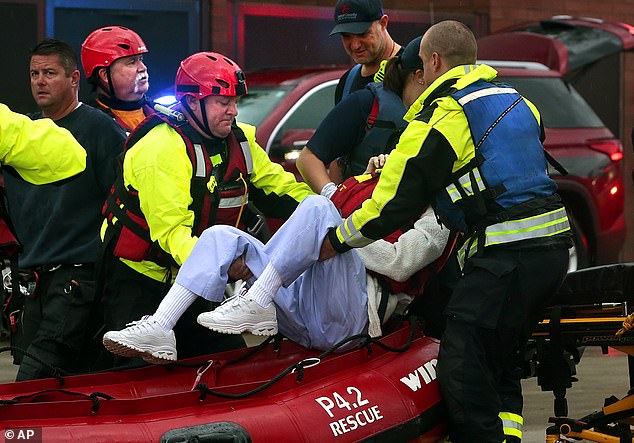 On Tuesday, firefighters pulled the body of a man out of a fully submerged vehicle at Skinker Boulevard and Enright Avenue in the Forest Park neighborhood.

The car was in eight and half feet of water in a low-lying area and the water was above the roof of the car.

‘As the water was receding, the car made itself visible,’ St. Louis Fire Chief Dennis Jenkerson said.

Firefighters were able to extract the body who was the deceased, but he has not been identified.

‘We don’t know if the individual drove into the water … It’s under investigation right now,’ Jenkerson said. 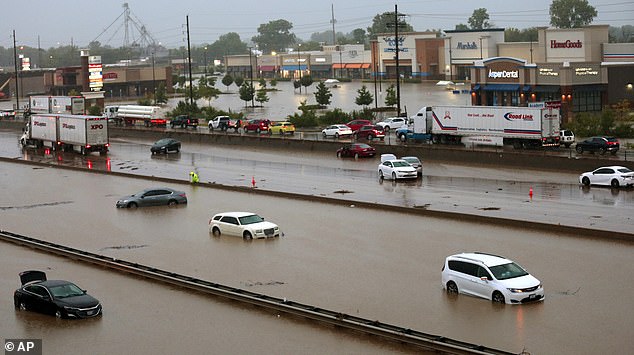 A record-breaking eight inches of rainwater fell overnight in St Louis, leaving many roads impassable as people were forced to abandon their cars on Interstate 70 during the intense flash floods 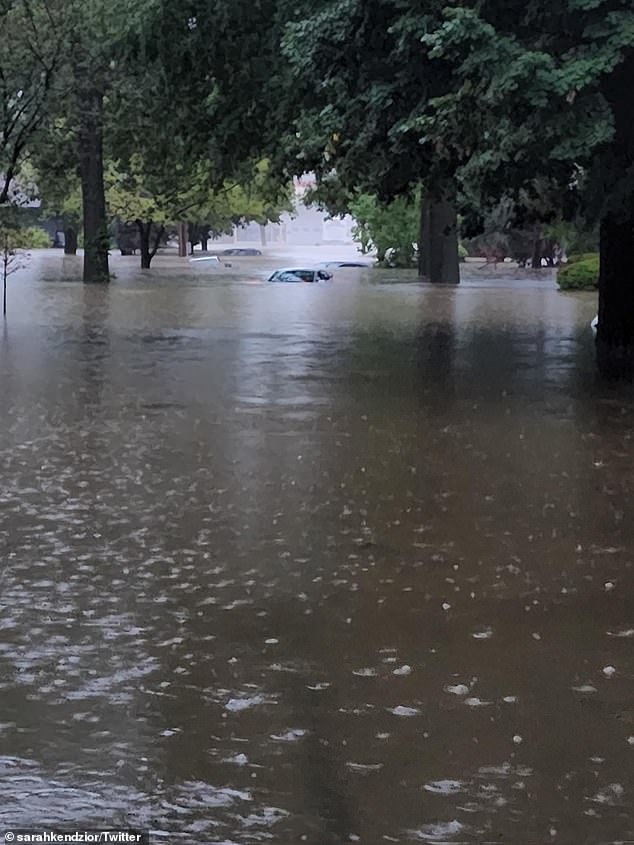 The raging flash floods over the week have washed out the century-old record of 6.85′, which was previously set on August 20th 1915.

The region has seen major flood damage – and city officials said that they are preparing for even more rain this evening.

Drivers were left stranded by the once-in-a-century deluge  – while other parts of the country have been scorched in coast-to-coast record-breaking heatwave during a week of tumultuous weather alerts.

The National Weather Service of St Louis has issued a Flash Flood Emergency for the city and advised residents to seek higher ground and avoid walking or driving through flooded areas.

They have recorded 8.81 inches of rainfall from midnight Monday to 9am Tuesday morning after the thunderstorms eased across the area by mid-morning.

Images of Forest Park DeBaliviere Metrolink station in St Louis showed the tracks and platforms completely under water – with just half of the information boards and steps still visible.

Highway 61 near Flint Hill also was closed due to the high water. The Fire Department reported that several cars were stranded on the Interstate 44.

Firefighters in St Louis were scrambling to search for stranded people in flooded vehicles.

National Weather Service previously warned that central to eastern Missouri and southwestern Illinois could see more than 12 inches of rainfall before the deluge ended after swamped neighborhoods were turned into rivers and lakes overnight.

Locals were told by Metro that bus and train passengers could see hours of delays all week long caused by the intense flooding.