‘Sorry Pedro, I take my kids with me’: Suicide note written by Connecticut mom to her husband before she strangled their three kids in murder-suicide

A Connecticut mother who strangled her three young children to death before hanging herself in a triple-murder suicide left a note for her husband.

‘Sorry, Pedro I take my kids with me,’ the note read, according to family member Digna Naulaguari, who told The New York Post.

Pedro still hasn’t finished the two-page letter written by his wife, Sonia Loja, 36, after she killed herself and her three kids – Junior Panjon, 12, Joselyn Panjon, 10, and Jonael Panjon, 5 – at their home in Danbury on Wednesday around 6.30 p.m.

It was later revealed that Loja had battled depression and was in distress after being cited multiple times for illegally operating a child-care center. Naulaguari said the caretaker didn’t have health insurance and couldn’t afford mental health treatment.

‘Her job was baby-sitting, but the city closed her business down, they said it was illegal. She was not working,’ Naulaguari said, ‘Then she was crying, she was so sad. She would say, ‘I need to work,’ but she had three kids, so she wanted to work from home. She wanted to stay and take care of her kids and the other kids.’ 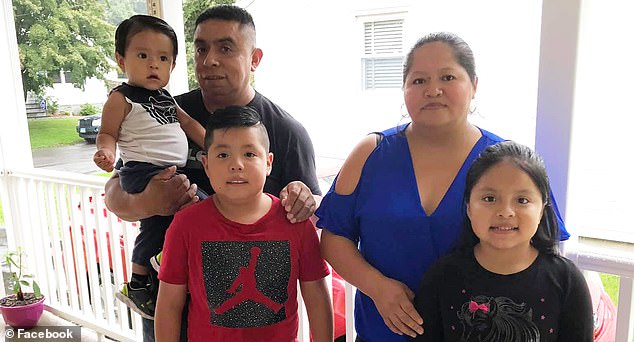 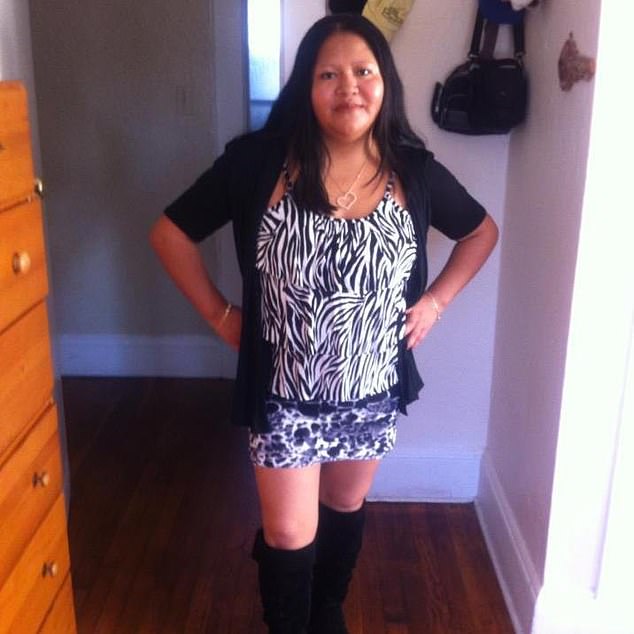 Loja called her sister on Monday to tell her she was experiencing stress and hadn’t slept,’ Nalulaguari explained. Her sister said she would visit Loja and her family on the weekend. Loja took her life two days later.

‘I feel terrible,’ Pedro told The New York Post on Friday. ‘There was nothing wrong with how Sonia was acting.’

Pedro – who works in landscaping – arrived at his home Wednesday afternoon after calling police and requesting a wellness check after not hearing from his wife all day.

Naulaguari explained Pedro knew something was off when his kids didn’t run out the door to greet him like they do everyday.

‘When Pedro came home from work, the kids would always rush out to his car and yell, “Daddy! Yay! My daddy came back!,” especially the girl, Joselyn,’ she said.

The day of the incident, Pedro went to the door and noticed it was locked – which was unusual for the family. Naulaguari said ‘his heart broke’ as he noticed something wasn’t right.

He quickly discovered the letter on the kitchen counter before dropping it to search for his children. Pedro found his son, Junior, in a bedroom with his daughter, Joselyn, on the bed.

His five-year-old son, Jonael, was found in a separate room with cords around his neck.

‘He took the cables off, hoping he’d hear life, but it was too late, Naulaguari said.

Pedro quickly called the police and ran outside to ask a neighbor to speak to a dispatcher who was having a hard time understanding him. 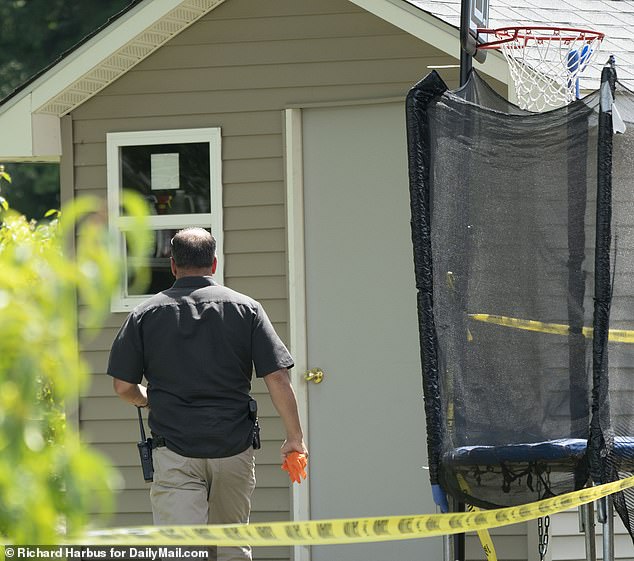 Loja was found in the back shed on the family’s Connecticut property. Police say she committed suicide by hanging herself after killing her family

Pedro ‘fainted to the ground’ upon discovering the bodies of his three children after his wife strangled them before hanging herself in their Connecticut home. He was later taken to the hospital.

‘He called the cops and asked them to do a wellness check and then he came here and he beat the cops here,’ neighbor Elvis Espinal told The New York Post.

‘He went inside and like a couple minutes later he came out and he called 911 and just fainted to the ground.’ 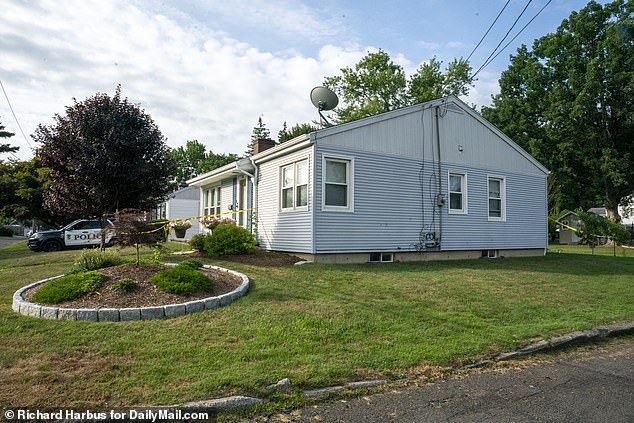 A neighbor says the father, Pedro Panjon, called police to conduct a wellness check after he hadn’t heard from his wife all day. Panjon beat police to his home where he discovered the bodies of his three children. Shortly after he came out of the home and fainted

Police later found Loja hanging from the ceiling of a shed the family built themselves during their nearly five years of living at the residence located at 10 Whaley St, according to Espinal.

He described the family as being ‘quiet’ while recalling the short and friendly gestures they’d exchange.

‘We’d say “Hi” and wave but they kept to themselves,”‘ Espinal said. ‘They had parties on the weekend, picnics. Just family. They kept the yard nice, they built that shed.’

Espinal described Loja as ‘even-tempered,’ adding that his family never noticed anything strange about the 36-year-old.

‘She was always nice to me,’ he said. ‘No attitude or anything. The kids were always very friendly, well-behaved.’

Espinal told the Post that he’s ‘had a knot’ in his stomach ever since he learned what happened to his quiet neighbors. ‘I still have no appetite. I’m not in shock, it’s more than shock, it’s like horror or like devastation. 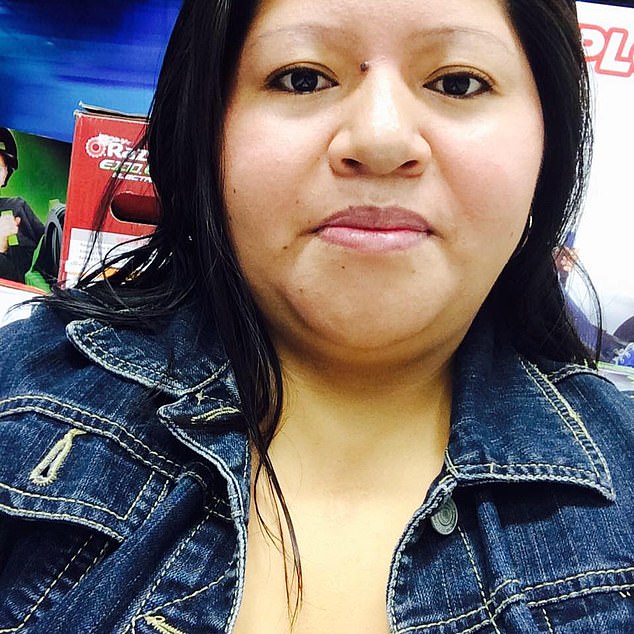 Neighbor Elvis Espinal told the New York Post that Loja (pictured) was ‘very friendly’ and ‘well-behaved.’ He recalls never noticing anything out of the ordinary about the 36-year-old 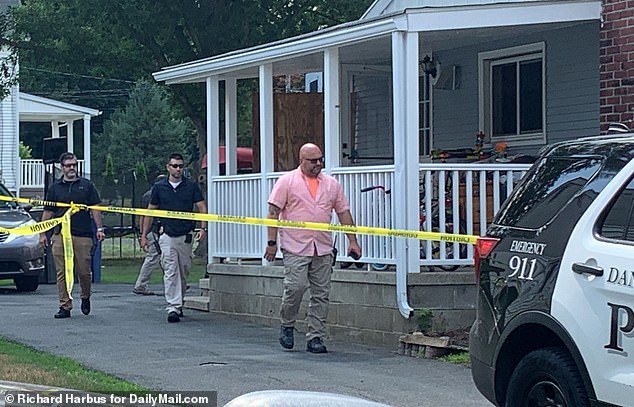 The family was described by a neighbor as being ‘quiet.’ The family would exchange brief friendly gestures with neighbors. Pictured: police working on the scene

Loja ran an illegal daycare out of her Danbury home where the murder suicide occurred. On Wednesday the caregiver called parents and told them to not drop their children off – the same day the horrific incident unfolded.

‘[Wednesday] morning, just before 10, a guy came to drop off his kid and she came to the door and said, “No, sorry, I can’t watch him today.”‘ neighbor Espinal recalled.

He added, ‘The kids she watched, they would always be outside playing, like all day,’ he said. ‘She has a swing set in the back and she never yelled! Never really even raised her voice. Not even like, you know, getting them to come in, or anything like that. She was quiet.’

Nube Sucuzhanay, 33, who has sent her two kids to Loja’s daycare for about seven years, said she was shocked when she heard about the incident.

‘I can’t believe Sonia did this,’ Sucuzhanay told The New York Post. ‘I don’t believe what’s happened. Sonia was a good person. She loved and looked after her kids and was good with the kids she looked after.

Sucuzhanay attended a vigil for the family outside of the home on Thursday. She explained that 15 years ago Loja immigrated to the US from Ecuador.

‘I was very comfortable leaving my children with Sonia,’ she said.

A classmate of 10-year-old Joselyn also attended the vigil and recalled her classmate from Saint Peter School as being ‘smart’ and a good friend.

‘Joselyn was a very smart, creative and helpful person,’ Katelyn Jimenez, 11, told the Post. ‘Joselyn was always there when you needed her. She would comfort anyone going through a tough time.’

She continued, ‘To me, it seemed like she lived a good life. She was very positive. She was great at art and music, but she was also very smart at math. I’m feeling sad. She was a good classmate and friend.’ 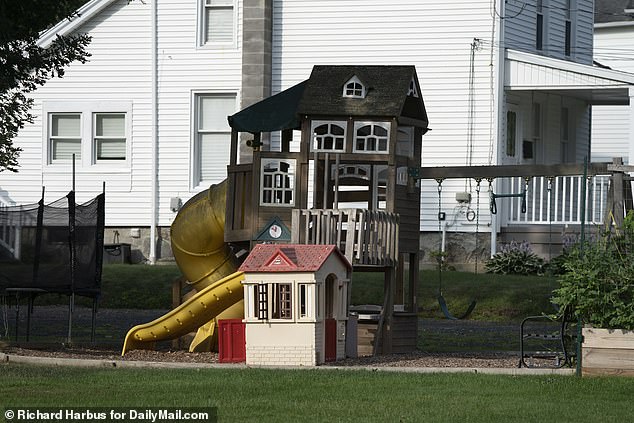 Loja ran a daycare from her home. She called parents prior to the incident and told them not to bring their kids in on Wednesday – the day of the horrific incident 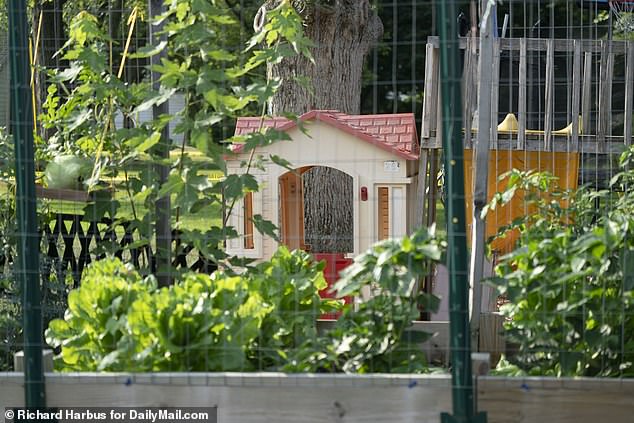 The day of the incident, a parent arrived to drop off their child after not receiving Loja’s message. Loja told the parent she couldn’t watch the child, a neighbor said 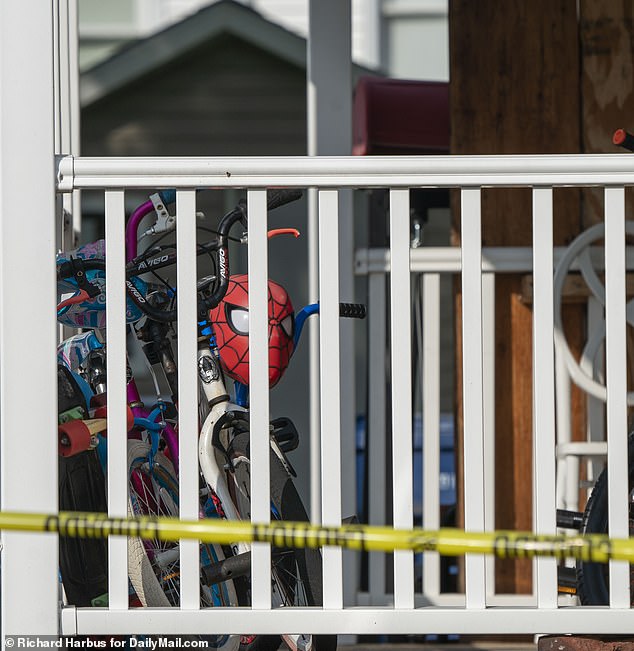 A neighbor said he would always see the kids playing in their backyard and around the house. He said Loja was ‘quiet’ and never raised her voice 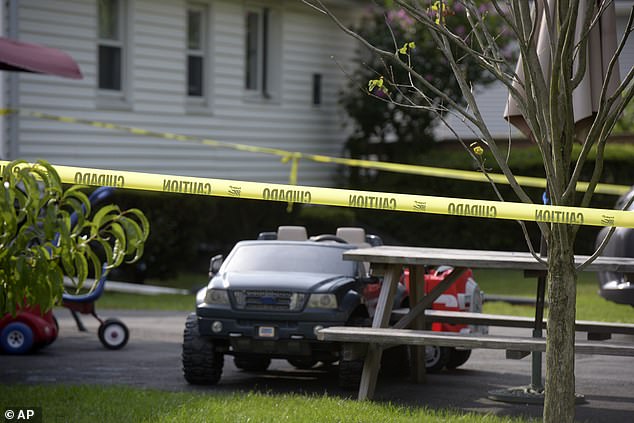 Loja and her three kids lived at the home with two other adults – who were not at the address when police arrived on Tuesday evening.

Since the death of his family, Pedro has posted photos on Facebook in tribute to his family.

Another photo displays a black ribbon with the words in Spanish, ‘Rest in Peace, now you are in a better place with God.’ 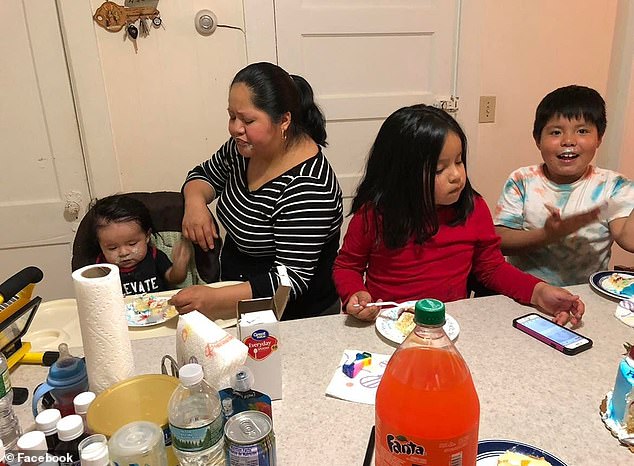 The father, Pedro, has posted photos of his deceased family on Facebook since the horrific Wednesday incident. His wife and three kids, pictured above, are seen eating cake as frosting sticks to their faces. Pedro updated the photo above as his profile picture

On Wednesday, chief of police Patrick Ridenhour said: ‘At approximately 6:33 pm officers responded to a well-being check call at 10 Whaley St. The caller was distraught and crying.

‘Upon arrival officers went inside the single family residence and discovered three deceased persons, all juveniles.

‘While conducting a further check of the premises they found a deceased female in a shed in the backyard.’ 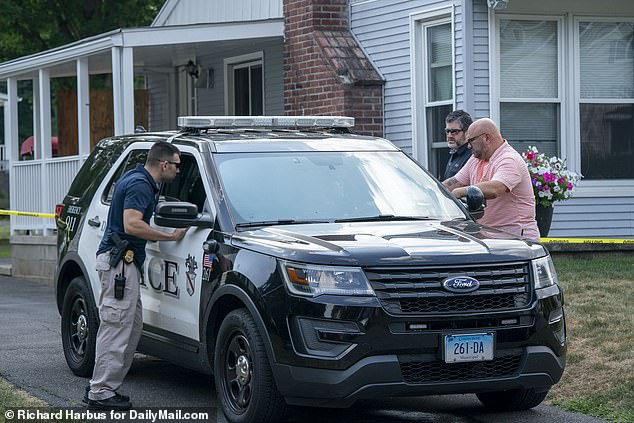 Police responded to the scene around 6.30 p.m. on Wednesday after receiving a request for a wellness check. Chief of police Patrick Ridenhour said the caller was distraught and crying 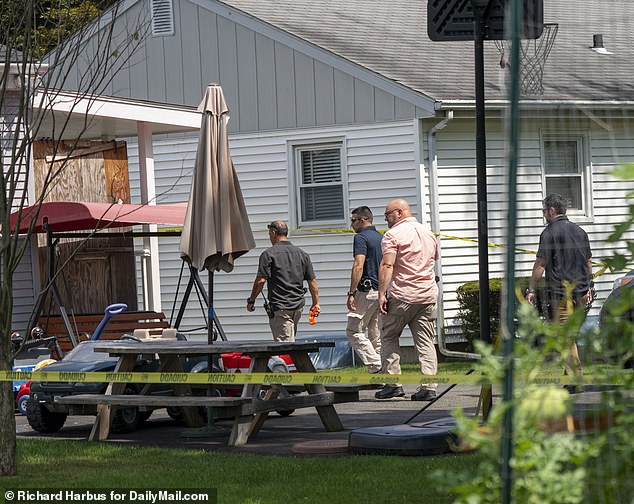 Detective Captain Mark Williams said in a statement Thursday: ‘We can now confirm the identities of the deceased as Sonia Loja, 36, Junior Panjon, 12, Joselyn Panjon, 10, and Jonael Panjon, 5.

‘Ms. Loja is the mother of the three children, and they all resided at 10 Whaley Street. The children all appear to have died by strangulation, and the mother’s suspected cause of death is asphyxia by hanging.

‘Pending an official autopsy, preliminary findings indicate that Ms. Loja strangled her three children before killing herself. However, this is still an active investigation.

‘Investigators had learned that the mother and children lived at the residence with two other adults, who were not present when the police arrived. They and other extended family members have been contacted and advised of the incident. 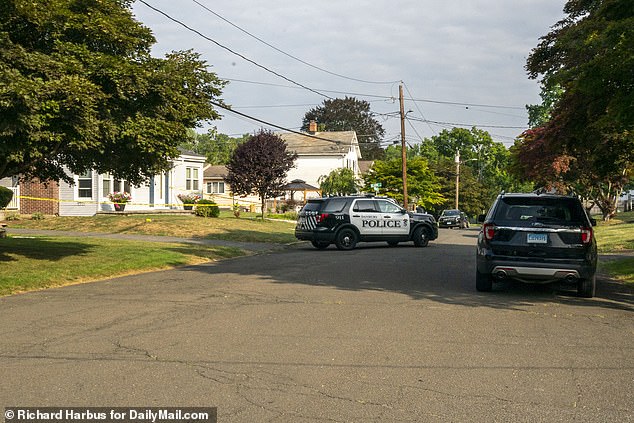 The scene at 10 Whaley Street shows the home with police cars outside the crime scene. The three children lived in the home with their parents and two others

Mayor Dean Esposito, who responded to the scene to offer support, said ‘a truly horrible event occurred in our city yesterday and we mourn the tragic loss of life.

‘In the coming days, mental health and counseling services will be provided through collaboration with the Danbury Public Schools and the City of Danbury.

‘Our community grieves for the innocent lives taken from us. We will get through this together’.

One neighbor, Tom Neville, said that the event has rattled locals in what is usually a quiet area.

He told NBC Connecticut on the night of the incident: ‘At 5 o’clock tonight, I was watering my flowers and nothing. Nothing looked like suspicious was going on or anything.’

Another neighbor, who remained anonymous, told News12Connecticut that ‘they’d often see the kids playing at a park nearby.’