Meghan Markle surprised Prince Harry on his birthday last year by ‘recreating their 2016 Botswana trip’, by ‘setting up a tent’ in their garden to remind him of the place ‘where they fell in love’

Meghan Markle created a touching surprise for her husband Prince Harry to mark his 35th birthday last year by ‘recreating’ the Botswana camping trip where the couple first ‘fell in love’, a source has revealed.

According to a royal insider, the 38-year-old Duchess of Sussex set up an elaborate celebration for Harry’s birthday on September 15, setting up a tent and sleeping bags in their garden at their former residence, Frogmore Cottage, so they could camp out under the stars.

‘Last year, for Harry’s birthday, Meghan recreated their Botswana camping adventures in their backyard,’ the source told People. ‘It’s a place that means so much to them — and to Harry in particular — so Meghan wanted to bring that happy place to him on his day so she set up a tent, got sleeping bags, cooked dinner and recreated Botswana where they fell in love.’ 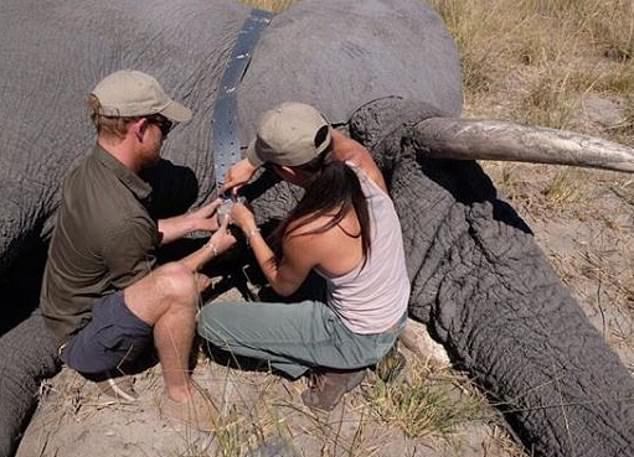 Special: Meghan Markle ‘recreated’ her 2016 trip to Botswana with Prince Harry for his birthday last year, a source told People. The couple are pictured there in the summer of 2017 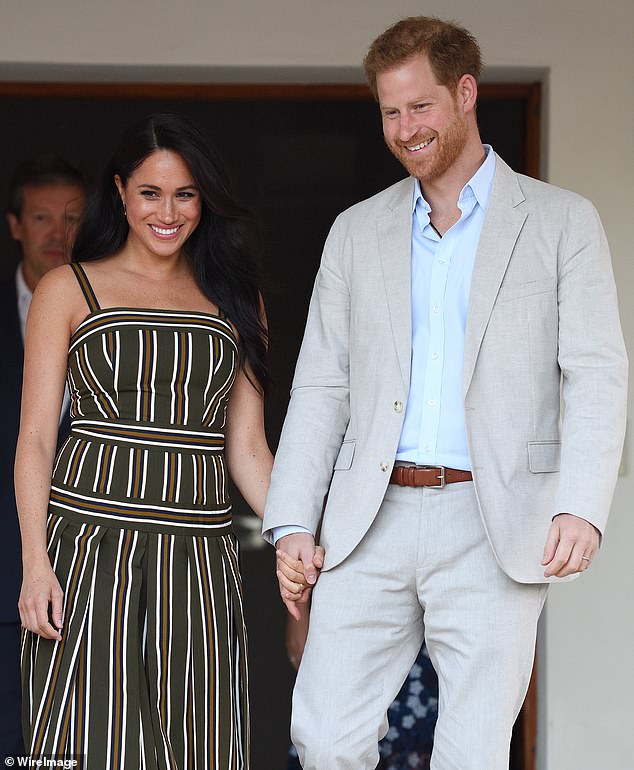 Meaningful: The 38-year-old duchess, pictured in South Africa with Harry, 35, ‘set up a tent, got sleeping bags, cooked dinner and recreated Botswana where they fell in love’

At the time, Prince Harry and Meghan were living in Frogmore Cottage in Windsor with their son Archie – and just a few weeks later they embarked on a trip to Africa as a family, during which they visited Botswana, as well as South Africa, Angola, and Malawi.

Botswana is an incredibly special place to both Meghan and Harry, who actually visited the country together for the first time just a few weeks after they first met on a blind date.

Shortly after their engagement in November 2017, the couple sat down with the BBC for their first interview, during which Harry recalled how he ‘convinced’ Meghan to fly out to Botswana to join him on a trip – while revealing how the couple spent a romantic five days camping out under the stars.

‘It was I think about three, maybe four weeks [after their first date] that I managed to persuade her to come and join me in Botswana,’ he said at the time.

‘And we, we camped out with each other under the stars, we spent, she came and joined me for five days out there, which was absolutely fantastic.’

The country has a special significance for Prince Harry, who first visited Botswana shortly after his mother Princess Diana’s death, when he traveled there with his brother and father.

Harry fell in love with the country on that first trip and has since returned regularly, getting increasingly involved with wildlife conservation efforts in Botswana. In 2017, he was even named as patron of Rhino Conservation Botswana, however it is unknown whether he still holds that position after stepping down as a senior royal. 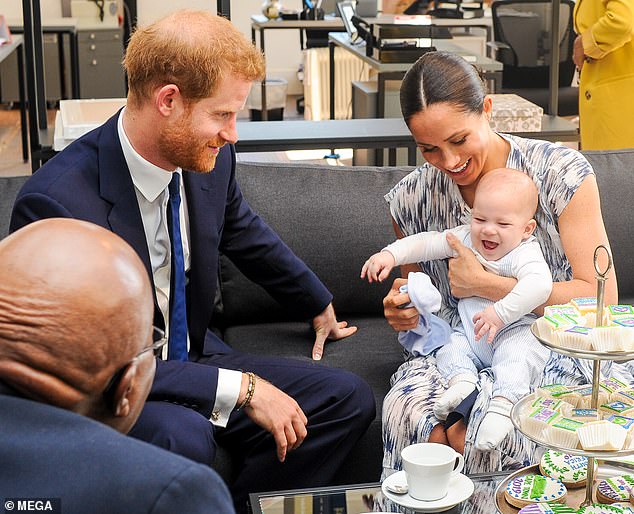 ‘Second home’: Harry and Meghan traveled to Botswana for a third time last year when they went on a tour of Africa with their son Archie. They are pictured together in Cape Town 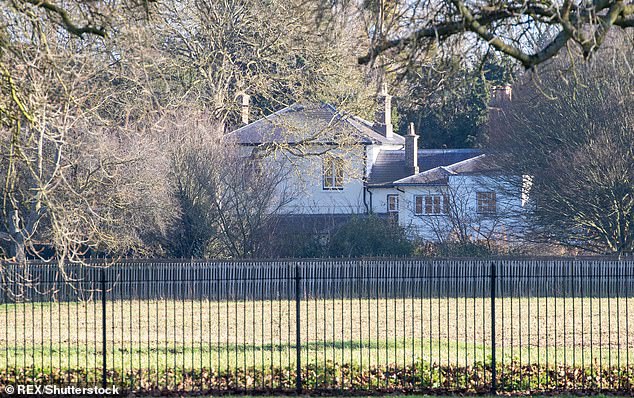 Home: At the time of Harry’s 35th birthday on September 15, the couple were still living at Frogmore Cottage in Windsor, but just months later they relocated to the US

Meghan and Harry returned for a second, extended trip to the country in the summer of 2017, shortly before they got engaged. They are reported to have spent three weeks there together, celebrating both Meghan’s 36th birthday and their first year as a couple.

When it came to finding the perfect engagement ring for Meghan, Harry even chose to source a diamond from Botswana – which he has previously referred to as his ‘second home’. The stone was paired with two diamonds from a tiara that belonged to Princess Diana.

The news about Meghan’s heartfelt birthday surprise for Prince Harry comes just after details about the couple’s second anniversary celebrations were revealed.

According to a source close to the couple, Harry and Meghan, who celebrated their anniversary on May 19, exchanged ‘very creative and romantic’ gifts, ‘doing their own take’ on the traditional second wedding anniversary gift – cotton.

‘This year, they both gave each other gifts based on cotton,’ the insider told People. ‘Undoubtedly, it was a very creative and romantic gesture as all their gifts are to one another.’

Putting a creative spin on the traditional anniversary gifts is something that the Duke and Duchess of Sussex started last year, the source added – revealing that Meghan presented her husband with a framed copy of their wedding speech to mark their first year as man and wife.

‘They love to do their own take on traditional wedding gifts,’ the person said. ‘The first anniversary was paper, and Meghan wrote out the wedding speech and had it framed for him.’ 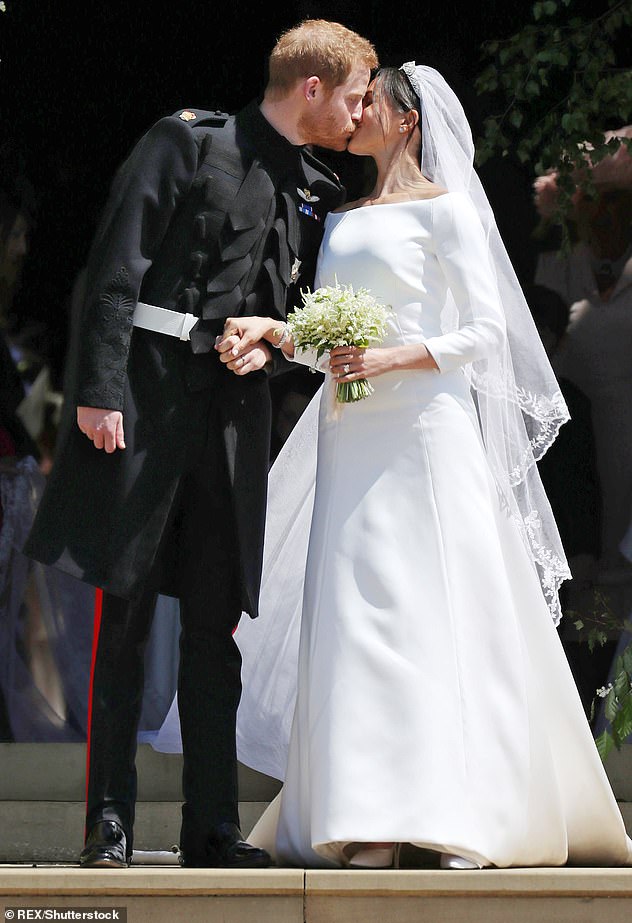 Celebrations: On Thursday, a source revealed that the couple exchanged ‘very creative and romantic’ gifts for their second wedding anniversary on May 19 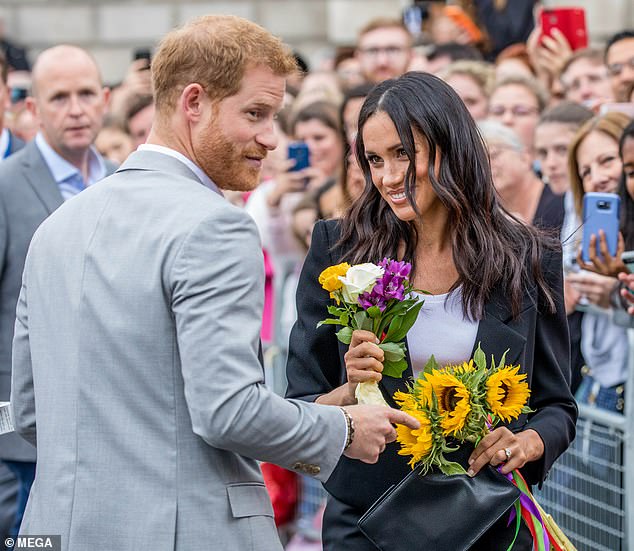 Shaking things up: Couples traditionally exchange cotton on their second anniversary, and the source told People that Harry and Meghan ‘love to do their own take on wedding gifts’

According to wedding website The Knot, paper symbolizes the fragility of marriage in its beginning stages. Just like a piece of paper, the relationship has to be cared for and protected, however if it is, it can survive for a lifetime.

Meanwhile cotton represents how close and interconnected a couple will grow throughout the years of marriage, while also demonstrating how husbands and wives can learn to be more flexible as they grow together.

Prince Harry and Meghan appear to have had plenty of time to think on the significance of their second wedding anniversary, with royal expert Katie Nicholl revealing to Vanity Fair that the couple had a very ‘reflective celebration together.

A friend of the couple told Nicholl that the couple marked their relationship milestone by ‘enjoying family time’ with their son Archie, one, at Tyler Perry’s $18 million Beverly Hills mansion, where they are currently living.

The couple’s unnamed pal added that the duo was feeling ‘quite reflective’ about the big day, after a year of ‘huge changes’.

‘The last year has been pretty epic and all the changes they have lived through and gone through are huge…To be honest they’re only just coming up for air,’ Nicholl revealed in Vanity Fair.

Harry and Meghan’s friend explained that the couple wanted to spend the day ‘mostly offline’ with their son Archie and simply ‘enjoying each other.’

Two years on from their wedding day, the source said that they are both ‘in a really good place’ and added that ‘speaking up’ and removing themselves from ‘a toxic situation’ had allowed them to create a life in which they could ‘flourish’. 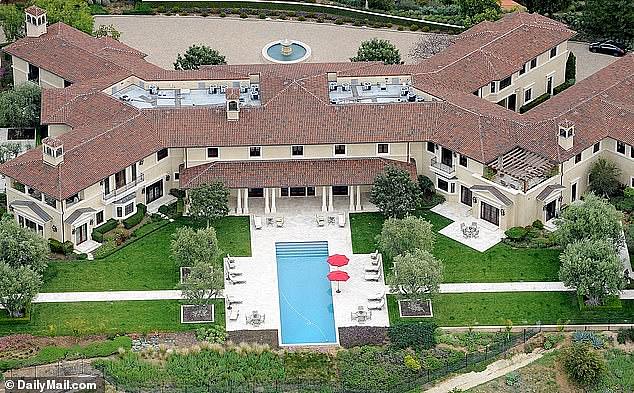 Quiet time: It has also been reported that the couple spent their day ‘reflecting’ and ‘enjoying family time’ in Tyler Perry’s $18 million Beverly Hills mansion, where they are currently living 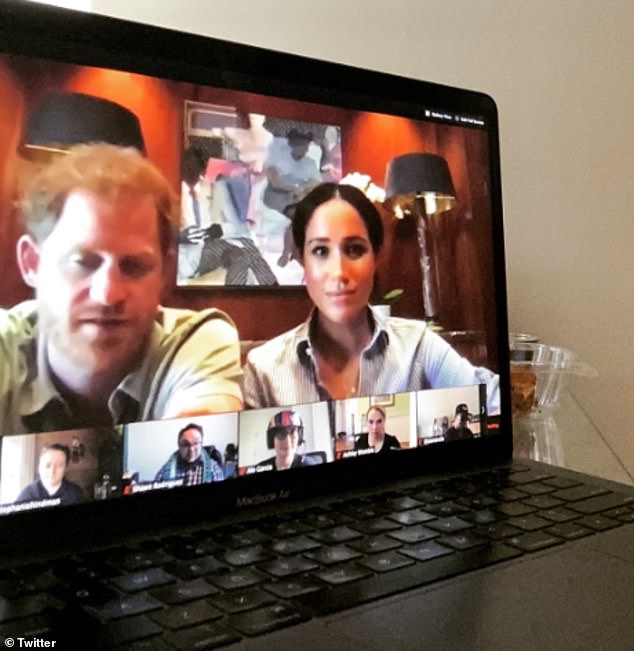 Busy bees: Harry and Meghan, pictured on a Zoom charity call, ‘made sure they had no meetings or calls in the diary’ on their anniversary, Harper’s Bazaar reported

The couple, who have been busy organising various charitable foundations, made sure they had no work calls booked in yesterday, two years after they married at Windsor Castle.

‘The day will simply be quality time with one another and as a family,’ a source close to the couple told Harper’s Bazaar‘s Omid Scobie, author of their upcoming biography Finding Freedom.

Revealing they have been very busy working on various charities, the source continued: ‘They’re not going to be doing any work and made sure they have no meetings or calls in the diary.’

‘Like everyone else, they are in lockdown at the moment, so they will just be hanging out together at home,’ says the source. ‘But it will still be a lovely day.’

‘Today marks one year since Their Royal Highnesses exchanged vows at St George’s Chapel in the grounds of Windsor Castle.’

This year however their focus has remained on the Queen’s future garden parties, while Kensington Palace, Clarence House and the other official accounts have remained silent.

The Duke and Duchess of Sussex wed on Saturday 19th May two years ago at St George’s chapel with the whole royal family in attendance, along with many celebrities guests including George Clooney and Robbie Williams.