Heavy rains brought another round of flooding to the St. Louis region that was already recovering from record rains earlier this week, prompting firefighters to help dozens of people escape the floodwaters.

No injuries were reported from Thursday’s flooding, but the St. Louis Fire Department said on Twitter that it responded to 75 flooding-related emergencies and 60 people were rescued or helped to safety.

Among the rescues, the department said firefighters carried six children to safety from a daycare at Cornerstone Institutional Baptist Church, where 15 children and three adults reportedly were trapped.

The storms that began Thursday afternoon lasted for a few hours and dropped about 2 to 4 inches of rain, according to early National Weather Service estimates. 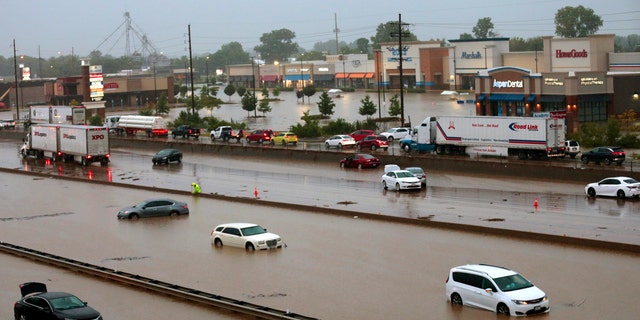 Abandoned cars are scattered by flooding across a shuttered Interstate 70 at Mid Rivers Mall Drive in St. Peters after heavy rain fell through the night and into the morning. (Robert Cohen/St. Louis Post-Dispatch via AP)

Debbie Boshans, her husband and their cat had been rescued Tuesday from their home due to flooding, and they were working to load belongings onto a trailer Thursday when rain began falling again, the St. Louis Post-Dispatch reported. Their street flooded a second time.

Earlier in the week, a storm system dropped more than 12 inches in St. Charles County and up to 10 inches in other areas on Tuesday and Wednesday. That prompted widespread flooding. Parts of southern Illinois also saw flooding after heavy rains.

The weather service said the rain that began early Tuesday was the most prolific in the St. Louis metropolitan area since records began in 1874.