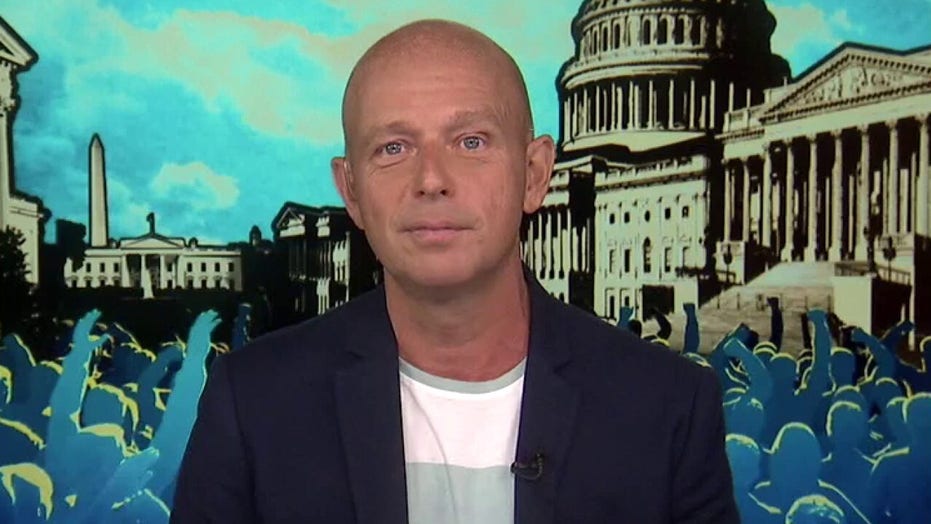 Parents all across America are rising up to smash the government school monopoly.

Here he is last week in what I thought was one of the most important policy statements of his presidency.

DONALD TRUMP: If schools do not reopen, the funding should go to parents to send their child to public, private, charter, religious or homeschool, of their choice.

The key word being choice. If the school is closed, the money should follow the student so the parents and families are in control of their own decisions. So I would like the money to go to the parents of the student.

I've been arguing for this for years. Here's what I wrote in my book, "More Human."

"The government school monopoly requires standardization and a factory approach. We need a completely open local marketplace for schools. Teachers, educational entrepreneurs and groups of parents must be permitted to set up schools, free of bureaucratic restrictions and hassle."

Today, it's becoming a reality, all because ther teacher unions and the Democrats and the bureaucrats and the rotten educational establishment have overplayed their hand.

As I put it in a tweet after last Sunday's show, "The government school monopoly is dying, suicide, thanks to teacher unions, school boards, refusing to give parents what they want. Micro schools, homeschooling, it’s all happening. Next step, Federal school vouchers. #MySchoolMoneyBack."

We've laid out the evidence week after week, the science says reopen schools. Children are far less likely to get the virus, spread the virus, suffer from the virus, while they are suffering massively from not being at school.

But the exact same people who lecture us about following the data, who call you a science denier if you disagree with a single aspect of their ever more extreme environmental agenda. Well, they are the science deniers now, keeping schools closed despite all the evidence that it's not just unnecessary for controlling the virus, but actively harmful to our children.

Now, I tried to be open minded. The bureaucratic school closure brigade, they're just covering their, you know what, right?

Government officials, they're always overcautious, prattling on about safety being their top priority, even though keeping kids away from school is not safe. It is dangerous.

But when you see things like the United Teachers of Los Angeles, in their school closure demand, adding Medicare-for-All, defunding the police and a moratorium on charter schools; the Oregon Education Association demanding that charter schools even be stopped from offering distance learning.

In North Carolina, a local affiliate of the NCAE demanding universal health care and income support for illegal immigrants.

What has any of this got to do with slowing the spread of coronavirus?

Nothing. The school closures are not about health. They're about power, a cynical trick to boost the power of probably the most destructive single institution in America, the teacher unions.

And it's not just cynical, it's corrupt. The politicians caving to the teacher unions on school closures are just doing the bidding of their donors. More than $200 million over the last three decades. And with the Democrats, the institutional corruption goes all the way to the top.

Joe Biden, throughout his corrupt career, bought and paid for by the teacher unions, including nearly $2 million since 2018 from just one of them. Here's what the unions got in return.

And if I'm not listening, I'm going to be sleeping alone in the Lincoln bedroom.

No privately funded, charter school would receive or private choice receive a penny of Federal money. None.

In his platform, Biden pledging to kill a Washington, D.C. school choice program that helps poor kids go to college, over 90 percent of them Black and Hispanic.

Biden's corrupt scheme to attack the very schools that help poor kids and Black kids the most is racist and evil. It alone makes him unfit to be president.

Well, parents, they can see through all the BS. They've had enough and they're not taking it anymore. Two weeks ago, we launched our campaign.

HILTON:  If your child's school won't open this fall, demand your money back so you can find an alternative. It's your child. It's your tax dollars. Why should you pay for a service you're not getting?

That's our new campaign. Reopen schools or give me my school money back.

Now, parents all across America are rising up in this revolution to smash the government school monopoly. Last week, Jordan Sekulow told us that hundreds of families had contacted the ACLJ about suing school closure districts.

The scale and pace of this is shocking to the complacent education establishment. In this account shared by Bethany Mandel, within a 48-hour period, thousands of parents scrambled to online communities to put together homeschooling groups.

There are reports of families teaming up to recruit teachers and form pandemic pods so that children won't go more months without a real education. Of course, the snooty elitist try to pretend this is all about rich White parents. It's racist to want to educate your kids now, apparently. How disgusting.

For years, Black parents have been in the vanguard of the school choice movement as Thomas Sowell documents in his brilliant new book, “Charter Schools and Their Enemies." As he put it himself, "Schools exist for the education of children, not to provide ironclad jobs for teachers, billions of dollars in union dues for teacher unions, monopolies for educational bureaucracies, a guaranteed market for teachers college degrees, or a captive audience for indoctrinators."

The left says poor parents can't handle school choice. How patronizing. One of the most inspiring sights of my life was seeing parents in one of the world's worst slums in Lagos, Nigeria get together to fund a low cost private school, paying just cents to send their kids there, because the local government school was failing their kids.

Private schools for the poor is a phenomenon sweeping the developing world. And now here in America, the alternatives to government schools are becoming more and more affordable. There are many organizations ready to help. We'll put them out on social media over the next few days.

Because the cost of these innovative alternatives is falling all the time, a Federal school voucher in the low thousands of dollars will enable millions of parents to escape the clutches of the government schools, and that's exactly what President Trump announced this week he wanted in the relief bill.

Guess who is standing in the way of that? Unbelievably, it's Senate Majority Leader Mitch McConnell, R-Ky., and Treasury Secretary Steve Mnuchin. Right now, planning to give $70 billion to school bureaucrats, including those who won't even open schools.

They think this is smart politics before an election. No. School boards don't vote. Parents do. Give the money directly to them. Just like the president wants. Make it a red line for the next relief bill. Let's get it done.

Let's put power in parents' hands. Let's put our children first. Let's kill off for good the power of the educational establishment, the school's bureaucracy, the teacher unions who have all done so much damage for so long and back the parent power revolution.

Adapted from Steve Hilton's monologue on "The Next Revolution with Steve Hilton" on July 26, 2020.