Fox News Contributor Raymond Arroyo weighs in on ‘Fox & Friends Weekend,’ arguing that the move is an ‘act of mercy to Nancy Pelosi’ and that one must ‘live consistently the life that you are claiming as a Catholic.’

Support to bar House Speaker Nancy Pelosi from receiving Holy Communion is mounting among Roman Catholic U.S. bishops who are condemning her support of abortion as a moral evil.

“The church clearly teaches that abortion is a grave evil, and that public advocacy for — and support of — abortion is, objectively speaking, such a manifest grave sin,” Portland Archbishop Alexander Sample said Friday on Facebook.

Earlier this month, San Francisco Archbishop Salvatore Cordileone announced Pelosi was barred from receiving Communion at the diocese where she resides in California. 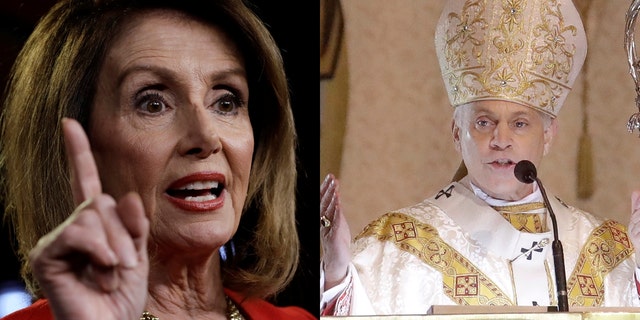 “A Catholic legislator who supports procured abortion, after knowing the teaching of the Church, commits a manifestly grave sin which is a cause of most serious scandal to others.  Therefore, universal Church law provides that such persons ‘are not to be admitted to Holy Communion,'” Cordileone said in a letter to Pelosi.

He has since been joined by at least three other bishops announcing similar bans.

“I have not publicly announced that someone is not to receive Communion in my diocese, but I have privately shared that directive with individuals who have continuously scandalized the church by holding a personal Catholic identity while also publicly advocating for abortion or other inherent moral evils,” Bishop Michael F. Burbidge, of the Catholic Diocese of Arlington in Virginia, said in a podcast on May 25.

In addition to Burbridge and Cordileone, Bishop Robert Vasa of the Diocese of Santa Rosa in California and Bishop Joseph Strickland of the Diocese of Tyler in Texas have also said Pelosi would be denied Communion if she were to present herself at churches within the dioceses.

Vasa’s diocese borders the San Francisco archdiocese. He argued in comments to the Washington Post that canon law “makes it clear that providing sacraments to someone prohibited from receiving them has its own possible penalties.”

“I have visited with the pastor at St. Helena and informed him that if the Archbishop prohibited someone from receiving Holy Communion then that restriction followed the person and that the pastor was not free to ignore it,” Vasa said in a statement.

Bishop Burbidge added in his comment on a podcast last week that Cordileone is Pelosi’s “bishop and as that bishop the direction and guidance he provides is not limited to just a geographical area.”

These decisions “are not political for bishops. They’re moral and they’re spiritual. They’re the result of prayer and discernment,” he added.

Strickland said that his ban on Pelosi receiving Communion came about “to emphasize that what Archbishop Cordileone is doing is considered to be ‘medicinal’” for the House speaker.

Nancy Pelosi has long supported abortion, which is condemned by the Catholic Church as a grave sin. (AP Photo/J. Scott Applewhite)

Pelosi has long been a supporter of abortion, which is condemned by the Catholic Church as a grave sin that defies the commandment of “thou shalt not kill.”

Pelosi defended her abortion support during an appearance on MSNBC’s “Morning Joe” last week, arguing abortion is a “frontman” to “undo” access to contraceptives and in vitro fertilization. She also criticized the Church for not taking action on Catholics who support the death penalty.

“I wonder about the death penalty, which I am opposed to,” Pelosi said. “So is the Church, but they take no action against people who may not share their view.”

Pelosi did receive Communion at Mass at Holy Trinity in the Georgetown neighborhood of Washington, D.C., on May 22. The Archdiocese of Washington, D.C., has been silent on the recent bans, besides mistakenly responding to a media inquiry that explained inquiries on barring Pelosi from Communion “will be ignored.”

The controversy surrounding Pelosi being barred from Communion continued Sunday when Pope Francis elevated the San Diego bishop who has spoken out against calls to exclude pro-choice politicians from the Holy Sacrament. 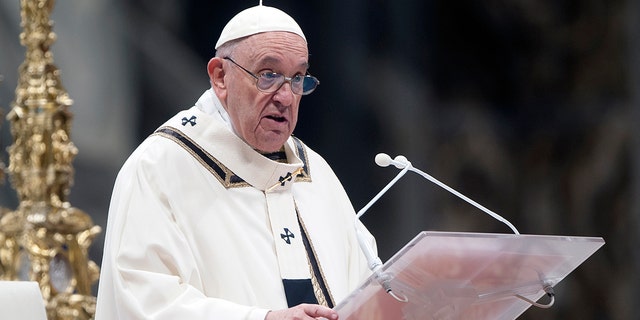 Pope Francis holds his homily during a Mass on the Solemnity of the Epiphany at St. Peter’s Basilica on Jan. 6, 2022, in Vatican City, Vatican. (AleVatican Pool/Getty Images)

Pope Francis said last year that he has “never refused the Eucharist to anyone,” and called Communion “a gift” and not “a prize for the perfect.” He also condemned abortion in the same interview, explaining that “whoever has an abortion kills.”