The ’10-3-2-1 formula’ for a PERFECT night’s sleep: Cut caffeine off at 1pm, have your last meal or glass of wine no later than 8pm, make a to-do list to stop your mind racing and NEVER watch Netflix in bed

You’d think with decades of practice, we’d all be professionals by now. So, why is it that millions of us still struggle to get a good night’s sleep?

Two-thirds of adults in the US and UK fail to get the recommended eight hours and studies suggest the average American and Briton gets around just six.

Busy lives and hectic work schedules are the most common reasons given for not getting enough sleep. But our obsession with technology, a lack of exercise and culture of eating late have also been blamed as reasons we are so under-slept.

Sleep doctors in recent years have waxed lyrical about the ’10-3-2-1′ formula, a step-by-step guide on how to best prepare yourself for a night of optimal sleep throughout the day.

But it’s bad news if you love caffeine, as the method says it has to go at least 10 hours before bed. And late eaters would have to bring their mealtimes forward to three hours before bed, or risk a night spent tossing and turning.

It comes after a mathematician this week claimed to have devised the perfect formula to help you feel chirpy in every morning. To start the day right, Dr Anne-Marie Imafidon, president-elect of the British Science Association, said we should get out of bed at 7.12am, exercise for exactly 21 minutes and then shower for ten minutes.

Here, MailOnline analyses the science behind the 10-3-2-1 formula: 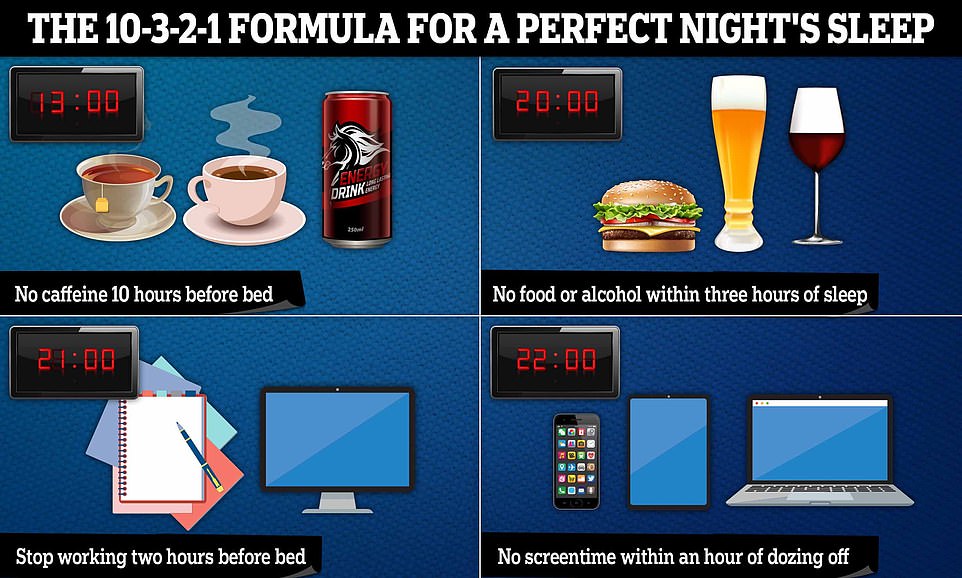 Sleep doctors in recent years have waxed lyrical about the ’10-3-2-1′ formula, a step-by-step guide on how to best prepare yourself for a night of optimal sleep throughout the day. But it’s bad news if you love caffeine, as the method says it has to go at least 10 hours before bed (top left). And late eaters would have to bring their mealtimes forward to three hours before bed (top right), or risk a night spent tossing and turning. The guide also recommends logging out of your work emails two hours before hitting the sack (bottom left) and even avoiding phones, tablets and laptops during the hour before hitting the hay (bottom right)

HOW MUCH SLEEP SHOULD I GET?

Most adults need between six and nine hours of sleep every night.

Going to bed and getting up at a similar time each night programmes the brain and internal body clock to get used to a set routine.

But few people manage to stick to strict bedtime patterns.

To get to sleep easier, the NHS advises winding down, such as by taking a bath, reading and avoiding electronic devices.

The health service also recommends keeping the bedroom sleep-friendly by removing TVs and gadgets from the room and keeping it dark and tidy.

For people who struggle to sleep, the NHS says keeping a sleep diary can uncover lifestyle habits or activities that contribute to sleepiness.

The expert-endorsed approach sets out that caffeine should stop 10 hours before bed.

With the average Briton going to bed at 11pm, this would mean no coffee, tea or energy drinks after 1pm.

The 10-hour time could be down to how long it takes caffeine to metabolize in the body. Health chiefs say it takes eight to 12 hours to clear from the system, giving an average of 10 hours.

An array of research has shown that caffeine can boost cognition and temporarily ward-off the effects of a poor night’s sleep.

But dozens of studies have shown the stimulant makes it harder to fall asleep and doesn’t protect against the effects of long-term sleep deprivation.

And a 2013 study by researchers from Wayne State University in Michigan suggests that consuming caffeine six hours before bed can slash how much sleep a person gets.

The scientists followed the sleeping habits of 12 people who had pills containing 400mg of the stimulant — the equivalent of two or three coffees — zero, three and six hours before their usual bedtime.

The results show that those who had the pills six hours before bed slept for one hour less than usual.

Experts also warn that caffeine too close to bed can reduce sleep quality. A review by University of Zürich researchers detailed that the stimulant suppresses slow-wave sleep — the deep sleep that leaves people feeling refreshed and alert.

If this is interrupted, people can be left feeling sleep deprived — meaning their memory, concentration and mood will take a hit.

THAT LAST SNACK OR GLASS OF WINE BETTER BE BEFORE 8PM 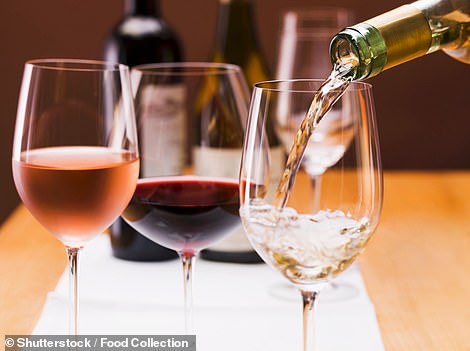 Under the 10-3-2-1 approach, people are advised against eating or drinking alcohol three hours before their head hits the pillow

Those having a late night drink or midnight snack may be putting their sleep at risk. Under the 10-3-2-1 approach, people are advised against eating or drinking alcohol three hours before their head hits the pillow.

Experts say this window of fasting gives the body plenty of time to digest food but is a short enough time that people don’t hit the sack hungry. And avoiding alcohol before bed is linked with better quality sleep.

But scientists have come up with slightly different rules.

Researchers at the London Sleep Centre, who reviewed 27 studies, found that those who drank shortly before bed were more likely doze off quickly and sleep deeper.

But they experience less rapid eye movement sleep — the stage where dreams happen, towards the end of the night. The nervous system is activated during this stage, which is key for getting ready to wake back up in the morning without feeling groggy.

And studies show that the later in the day you eat, the less chance food has to digest properly — leading to acid reflux and cramps, as well as making the digestive system work at night, giving a less restful sleep.

However, data shows conflicting results. A team at the University of Michigan detailed in a 2021 study of 13,000 Americans that those who ate within an hour of going to bed actually slept for an extra 30 minutes, on average.

But eating close to bedtime can have impacts beyond sleep quality. A 2016 study, by researchers at Dokuz Eylül University in Turkey found people who eat within two hours of sleep are more likely to suffer a heart attack or stroke.

The team, who monitored 700 people found that their blood pressure spiked and stayed high when they ate within two hours of bedtime. The scientists said this is because eating releases a rush of stress hormones when the body should be starting to relax. Those whose blood pressure stays high overnight have much higher rates of heart-related death.

WORK NO LATER THAN 9PM 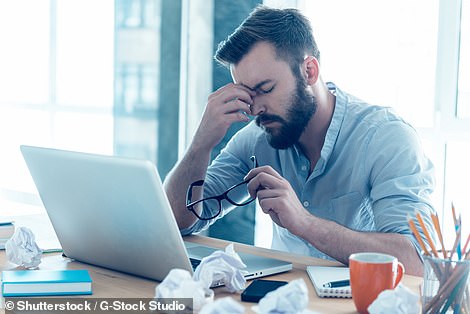 Experts say the brain should have two hours of rest before sleep. In this window, people should avoid all work-related activities, such as emails, phone calls and thinking about the following day

Experts say the brain should have two hours of rest before sleep.

In this window, people should avoid all work-related activities, such as emails, phone calls and thinking about the following day. People are even advised to write down any tasks on their mind so they can switch off for the night.

This is because those who struggle to get a good sleep often blame stress and anxiety. Being too tense can cause shallow breathing, increase heart rate and blood pressure and release hormones that make people feel more alert.

During this process it can be nearly impossible to fall asleep, with researchers consistently finding that those who struggle the most to sleep report the most stress.

A team at the University of Indonesia, who quizzed 450 people about their stress and sleeping patters, found worn down people were nearly five-times more likely to struggle sleeping than those who were not stressed.

And a study of 800 medical students found that those who were not stressed were 28 per cent more likely to have a satisfying sleep, according to researchers at the King Saud bin Abdulaziz University for Health Sciences.

But the findings seem to go both ways — with a lack of sleep itself contributing to stress.

A 2020 study by Chinese researchers, which saw more than 800 teenagers complete questionnaires on their sleeping habits, revealed that those who reported falling asleep fastest and the least amount of time tossing and turning were better able to cope with stress.

NO NETFLIX IN BED AFTER 10PM 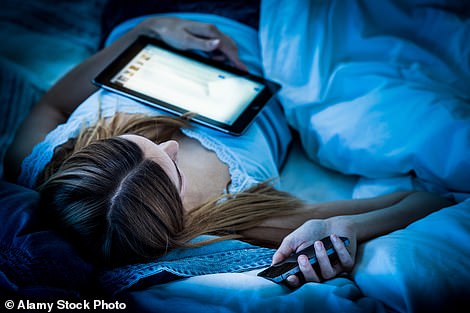 Experts have long warned that electronic devices interfere with human’s biological clock. As the sun comes up, the body produces the hormone cortisol, which makes you feel awake and alert

Experts have long warned that electronic devices interfere with human’s biological clock. As the sun comes up, the body produces the hormone cortisol, which makes you feel awake and alert.

As it gets darker in the evening, the body produces melatonin, which triggers feelings of sleepiness.

But evidence shows that looking at phones, tablets and laptops interferes with this process — meaning a late night scroll on social media or watching Netflix in bed could lead to sleeping troubles.

Researchers at Rensselaer Polytechnic Institute in New York found that using phones, tablets and laptops on maximum brightness two hours before bed makes it harder to drift off.

They said excess light stops the normal release of melatonin — the signal to the body clock that its time for bed.

Meanwhile, a team at the University of Arizona, who studied the sleep patterns and tech habits of hundreds of students, found that surfing the internet in the last hour before bed were more likely to have less sleep.

And a study of 700 Americans by the University of California found that those who looked at screens before bed reported higher levels of disrupted sleep.

On top of these results, a team at Harvard Medical School found that it’s not limited to devices — even bright lights around the home can hinder melatonin production at night by as much as 90 per cent.