The world might already be excited for Prince Harry and Meghan Markle’s wedding next spring, but the British monarchy isn’t the only royal family celebrating a love match this week.

Prince Christian of Hanover, 32, the stepson of Princess Caroline of Monaco, tied the knot with fiancee Alessandra de Osma, 25, in a low-key civil ceremony at the Chelsea and Westminster registry office in London on Sunday.

The couple, who will also marry in a more lavish ceremony in Alessandra’s native Peru in March next year, were joined by members of Monaco society for the service, which was followed by a wedding breakfast at the Ritz hotel.

Guests included Princess Caroline’s daughter, Charlotte Casiraghi, 31, who attended with her film producer boyfriend Dimitri Rassam, and her sons Pierre and Andrea Pierre and Andrea Casiraghil, who were joined by their glamorous wives.

Prince Christian and Alessandra have lived in Madrid for several years but are understood to have selected London for their nuptials as it is where his mother, Chantal Hochuli, is based.

Sealed with a kiss: Prince Christian offers a kiss to his new wife as well-wishers – many from Monaco society – look on. Right: It’s official! Designer Alessandra looked elegant in a tweed cream coat with pearl buttons. She wore her brunette locks loose 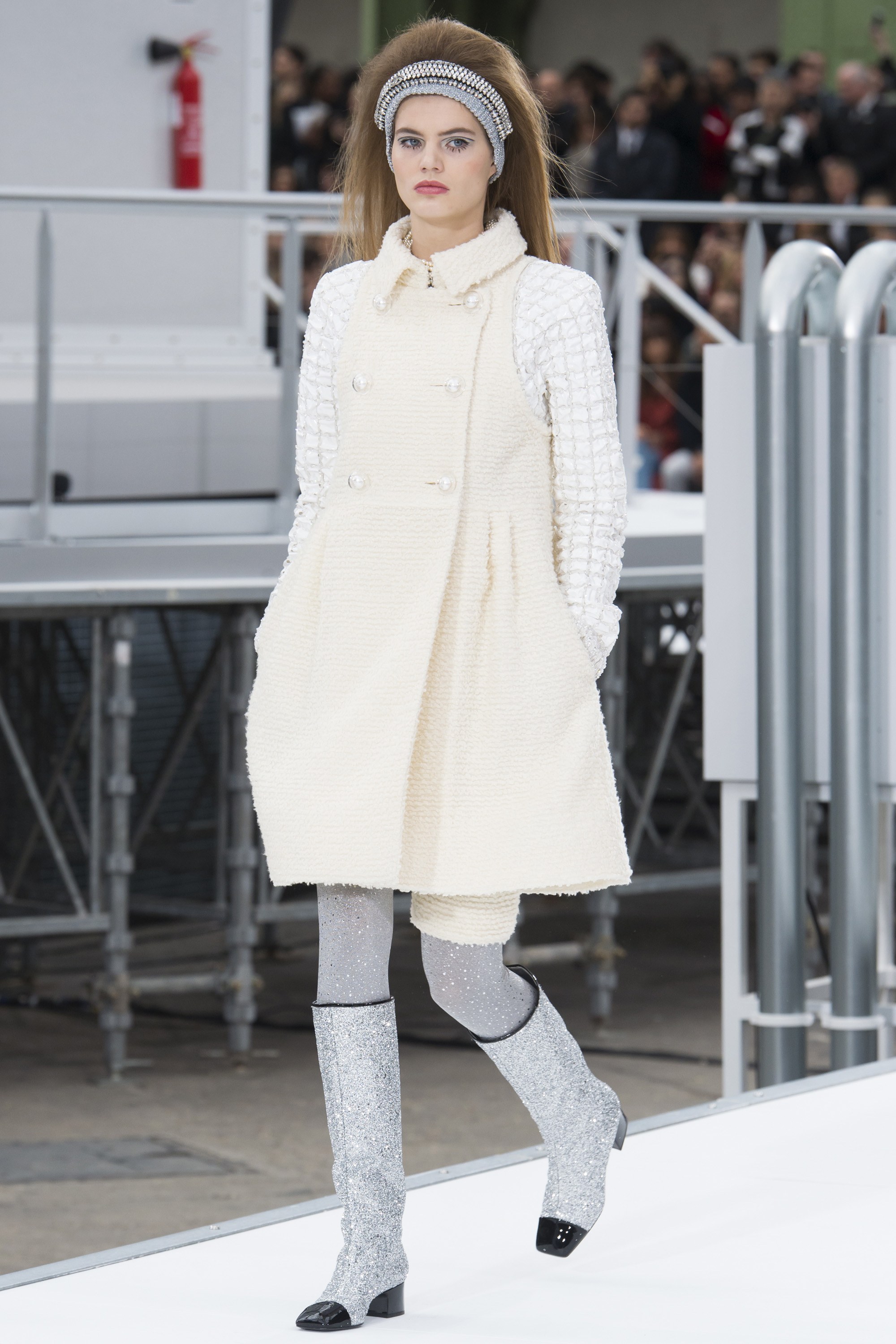 Alessandra de Osma showed exactly how to do a city civil ceremony wedding when she married Prince Christian of Hanover at Chelsea and Westminster registry office wearing a Chanel coat and Aquazzura heels.

Chic, understated, and timeless, this look is perfect for the low key celebration in London which was followed by a wedding breakfast at The Ritz, London.

This double breasted boucle coat was seen on the Chanel autumn/ winter 2017 runway and whilst it's not available to buy online you can click right to explore the brand and locate your neatest stockist.

Alternatively pick from our edit of similar styles below.

* PRICES MAY NOT BE AS ADVERTISED

Fashion designer and model Alessandra, who first met Prince Christian in 2005 when she was just 14, looked the picture of elegance in a 1950s style cream tweed coat with textured sleeves from Chanel’s autumn winter 2017 collection.

On her feet, she opted for a simple pair of nude suede pumps and carried a spray of delicate white flowers.

Meanwhile the groom, who is the second son of Ernst of Hanover and his ex-wife Ms Hochuli, 62, wore a navy blue suit with pale blue shirt and a sky-blue tie.

Hochuli, wearing a deep emerald frock coat, smiled as she threw a plume of rose petal confetti over the bride and groom and looked delighted to be celebrating her youngest son’s wedding.

The prince’s step-brother Pierre Casiraghi, the grandson of Grace Kelly, was in attendance with his wife, royal style icon Beatrice Borromeo.

Charlotte Casiraghi showcased her effortlessly cool style, opting for a masculine suit, oversized navy coat and chunky burgundy brogues for the occasion. She wore her brunette locks in a low-maintenance down do.

While the groom opted for a relaxed fit navy blue suit with pale blue shirt and a mid-blue tie, Alessandra’s show-stealing cream Chanel coat was complemented by a pair of nude suede heels with strap detail around the ankle. The South American designer carried a spray of delicate white flowers in a simple bouquet. To the far right of the couple is Princess Alexandra, the only child of Princess Caroline and Prince Ernst August; the 18-year-old wore an eye-catching pair of sparkly gold boots with a grey wool coat

The couple, who first met when Alessandra was just 14 and acting as Christian’s tour guide in Peru in 2005, will celebrate with a lavish religious ceremony in Peru on March 15th next year

Welcome to the family! On a chilly Sunday morning in West London, the couple’s guests were wrapped up warm as they gathered to throw confetti on the newlyweds. Wearing an emerald green coat over a cerise dress, Chantal Hochuli, the groom’s mother, led the confetti-throwing

Just married: Alessandra has become one of the world’s most fashionable members of the royal set in recent years; the designer is a regular on the global couture circuit

Members of the Hanover family look on as the couple pose for images. Right: Chantal Hochuli plumes rose petals over her son and new daughter-in-law

Eighteen-year-old Princess Alexandra, the only child of Princess Caroline and Prince Ernst August, chatted to a male companion outside the Ritz. The teenager looked chic – and warm – in a belted wool grey coat and eye-catching sparkling gold boots with a delicate piece of blue net fascinator covering her eyes.

As the couple posed for photographs on the steps of the register office, other key figures in the Monaco royal family stood by their side including Andrea Casiraghi with his wife Tatiana and Charlotte Casiraghi and her boyfriend Dimitri Rassam.

The couple announced their plans to marry earlier this year after dating for six years; they first met when De Osma was Christian’s teenage tour guide on a visit to Peru in 2005.

The Latin beauty has become known for her couture-heavy wardrobe and is regularly seen on the global fashion circuit.

Time for a sneaky cigarette: Andrea Casiraghi takes the air outside the Ritz: Right: a doorman at the luxury hotel chats with the guests as they arrive for the reception at the Piccadilly hotel

Princess Alexandra, 18, daughter of Princess Caroline of Hanover and Prince Ernst August of Hanover, looked stylish in a warm grey belted coat as she checked her phone outside the Ritz. The young Monaco royal then compared phone screens with her male companion

Monaco high society on the steps of the Ritz: Prince Ernst-August Junior of Hanover, centre awaits a car outside the Ritz