Young woman with F-cup breasts claims she trained them to be ‘perkier’ by NOT wearing a bra – so is her theory true?

An Australian body positivity Tiktokker been going viral for sharing styling tips for girls with larger busts – and claims she doesn’t wear a bra despite having an F-cup chest.

Casee Brim, from Queensland, said on her popular TikTok account her breasts don’t sag because she chooses to go braless most of the time and ‘will never go back’ to wearing underwire bras.

The fashion-lover created a series of video explaining how she thinks not wearing bra ‘engages’ your skin and muscles making them tighter and firmer however an expert says it may not be the best idea. 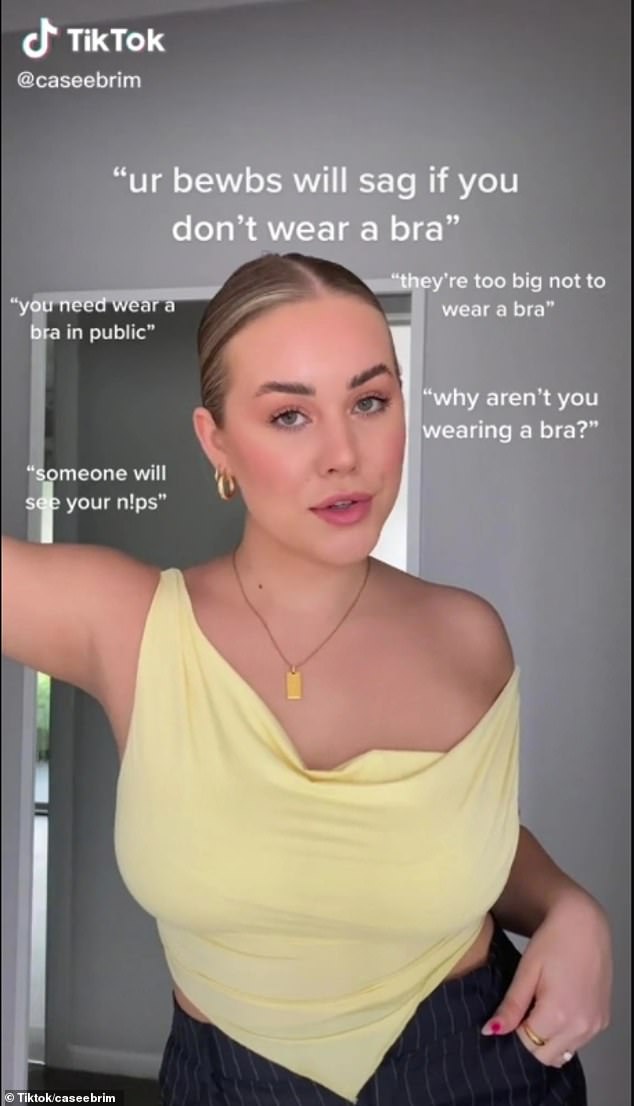 Body positivity TikTokker, Casee Brim, from Queensland, claims she doesn’t wear a bra despite having F-Cup breasts as she says it makes them ‘perkier’

‘If you’re wearing a bra all the time you’re relying on that bra to give that support the skin isn’t engaged the muscle isn’t engaged,’ Casee said in a TikTok video.

‘Whereas if you try and train your girls to go bra free more often the muscles are engaged, they’re protecting the girls and lifting and they’re actually working which makes the girls perkier,’ she continued.

While Casee admits ditching your bra won’t have the same effects on your breast as surgical enhancement she said it ‘does definitely make what you have and what you’re working with a bit more perkier, a bit more firmer, a bit easier to wrangle’.

‘Sometimes the occasion calls for tape or a bra or a little bralette type of thing just to bring the girls in a little bit but most of the time I never wear an underwire bra anymore at all and I will never go back,’ she said.

The claim sparked a discussion in the comments from hundreds of fans and viewers asking Casee to ‘teach them’ how to go bra free.

‘Will they actually sag though? I don’t wear one 98 per cent of the time,’ one braless supporter wrote.

Experts are divided on the issue with some supporting Casee’s claims while others say going bra-free can cause posture issues and has no evidence of preventing sagging.

Speaking to news.com.au, Assistant Professor Deirdre McGhee who has studied the way breasts move for more than 20 years said bras can make movement easier and support good posture, especially for those with larger cups sizes. 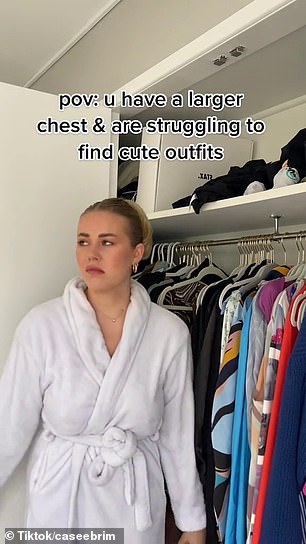 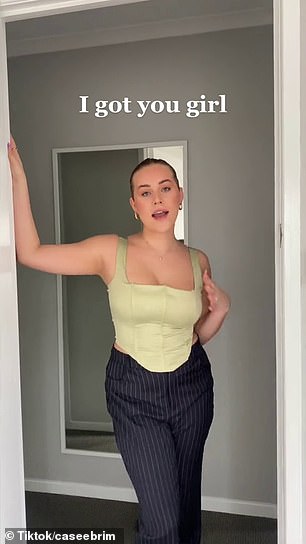 ‘Although I absolutely support a woman’s choice to wear whatever she wants, from my experience I have found that the posture of women who do not wear a bra or who wear bras that provide insufficient breast support, is more commonly a posture where the upper back is more curved and the shoulders are more rounded,’ she said.

Ms McGhee attributed this to the effect the mass of the breast has on the upper torso and the tendency to hide or protect an unsupported chest.

Why do breasts start to sag?

As we get older and go through different life stages, it’s natural for our breasts to change.

Breasts are made up of fat, connective tissue, milk-producing glands and Cooper’s ligaments.

As we get older, fat tissue replaces the milk glands in the breasts. This fat naturally has less support.

When do breasts sag?

There’s no specific age when your breasts will start to sag.

It’s common for some droop in your 40s and beyond, but many women experience saggy breasts earlier.

If you’re lucky enough to escape the droop in your 30s and 40s, you’ll most likely notice changes in elasticity and fullness as menopause approaches.

Other factors that cause saggy breasts

– Weight change: Gaining or losing weight, especially quickly, such as during pregnancy, can change the shape of your breasts. It can also stretch or shrink the skin surrounding them.

–  Genetics: Your genes play a part in breast size and shape, weight, and the strength of your Cooper’s ligaments.

– Use sunscreen:  The sun stretches out collagen and damages your skin. Your sensitive breasts can also burn quickly and easily. The sunburn affects your skin cells and elasticity, encouraging wrinkling.

Cover up where possible or protect yourself with good quality, high protection sunscreen to help keep your breasts looking perky for longer.

– Wear the correct fitting bra: A supportive, well-fitting bra should also feel comfortable. From everyday activity through to vigorous exercise, the right bra is critical for preventing breast sagging by reducing excess bounce and movement.

– Drink plenty of water: Keep your skin healthy and hydrated to help preserve its elasticity. It’s a good habit to get into for your overall health, too.

The ABC reported, Dr Amanda Newman from the Jean Hailes Women’s Health Organisation said hormones, genetics and weight have more to do with sagging rather than whether or not someone choses to wears a bra.

‘There has been some suggestion that your breasts will become less droopy if you wear a bra, but I don’t think there’s any good evidence for that,’ she said.

‘Breasts become floppy and saggy as they get older, and there’s a link with hormones. After menopause they become more droopy, during pregnancy they are bigger, during your period they are more tender.’