Trey Songz appeared to throw the first punch and was approached three times about not wearing wearing a mask just before his arrest in a new video released by the Kansas City Police.

The Missouri law enforcement agency posted the footage, which seemed to be from a security camera at Arrowhead Stadium, showing Trey – real name Tremaine Aldon Neverson – and a group of friends in the stands.

The video – which is from the AFC Championship game between the Kansas City Chiefs and Buffalo Bills – points out Trey in the same black hoodie and hat that other footage of the incident has shown. 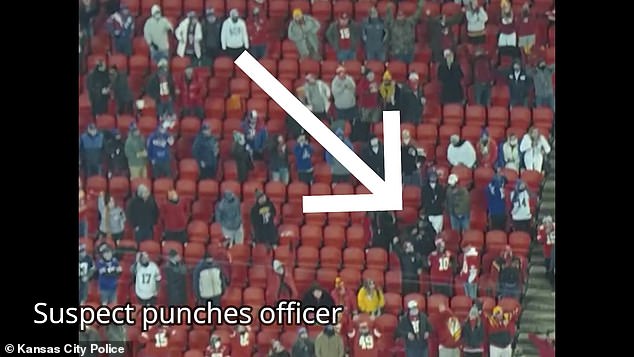 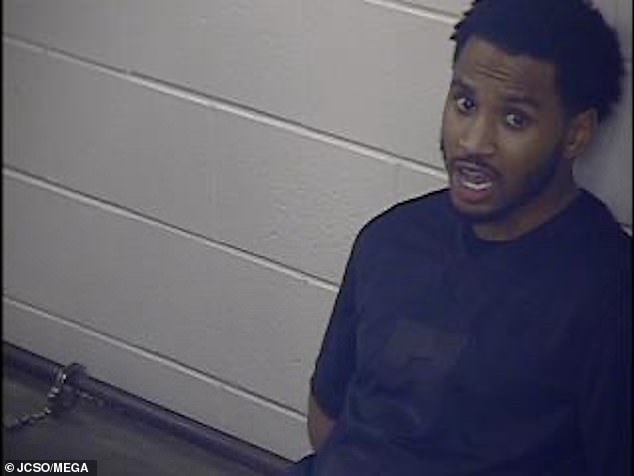 This is a photo of the 36-year-old singer at the Jackson County Detention Center in Kansas City, Missouri after the arrest

Stadium security approached he and the group three different times – including the first time where one appeared to be flashing a mask gesture to the group –  before a KCPD officer was called in to intervene.

The law enforcement official has a conversation with the singer for over a minute before walking into the row to try to escort him out of the stadium.

Trey backed away from the officer in the row before seemingly swinging a fist and shoving the police officer. 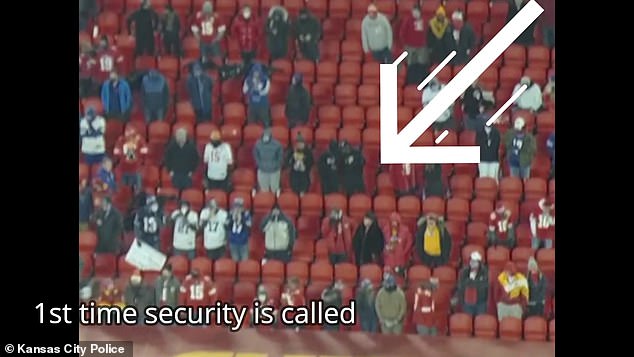 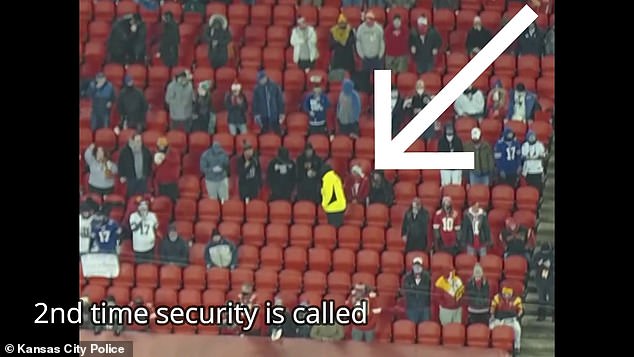 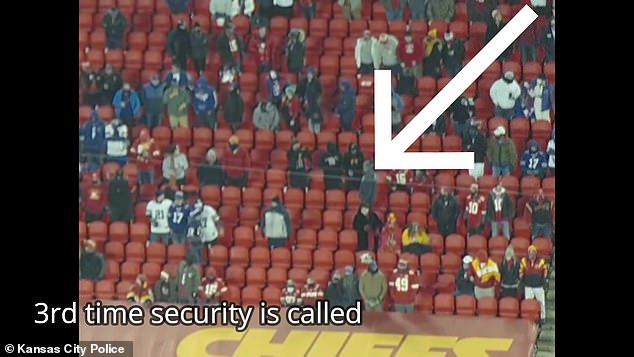 A security guard from the stadium walked over a third time 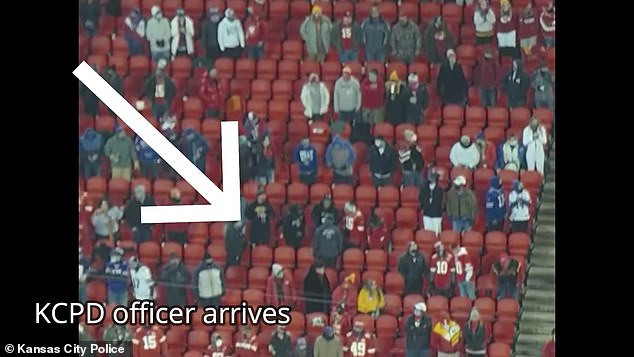 A Kansas City Police Department officer was then called to intervene

Chaos ensues between security and the group and at one point Trey appears to put the officer in a headlock.

DailyMail.com has reached out to representatives for Songz who have so far been unavailable for comment.

The Say Aah did not seem too bothered about the incident as he took to Instagram to share a gallery of photos and videos from the trip including from inside of a private jet. He jokingly captioned it: ‘Chiefs game was lit right?!’ 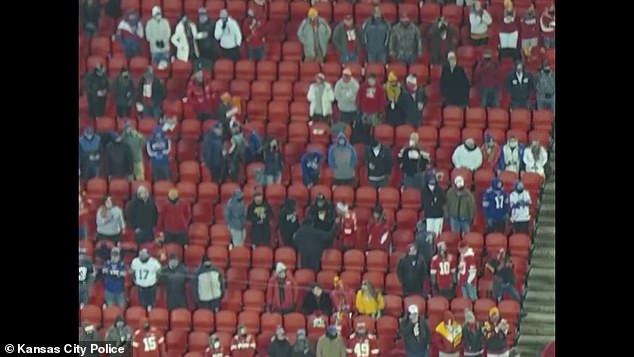 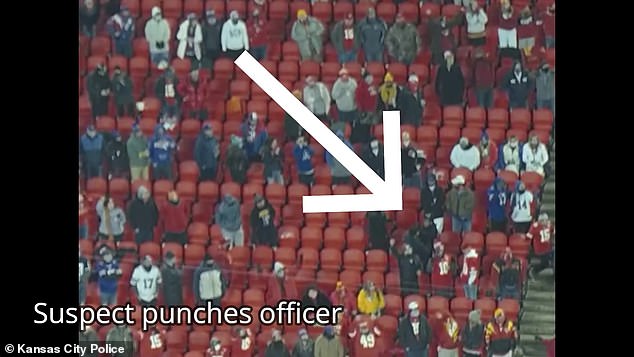 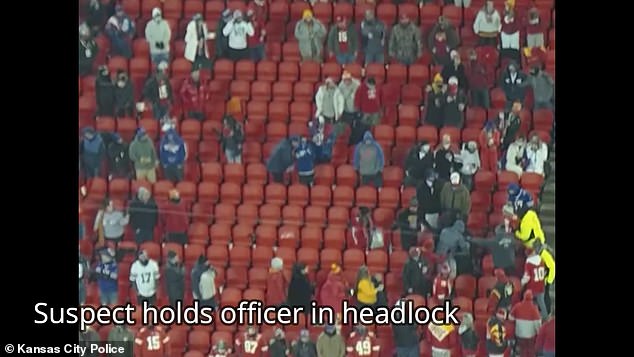 One interesting thing was that Trey did have a mask on in one of the snaps that he took next to a security guard posted in the gallery.

News broke on Sunday that he was arrested after getting into a violent fight with police at the NFL playoff game.

A police officer was seen tackling the artist in a video obtained by TMZ and the singer then put the officer in a headlock.

The site claimed that the problem started when a security guard and then a police officer asked Songz to wear a mask at the event and he refused. 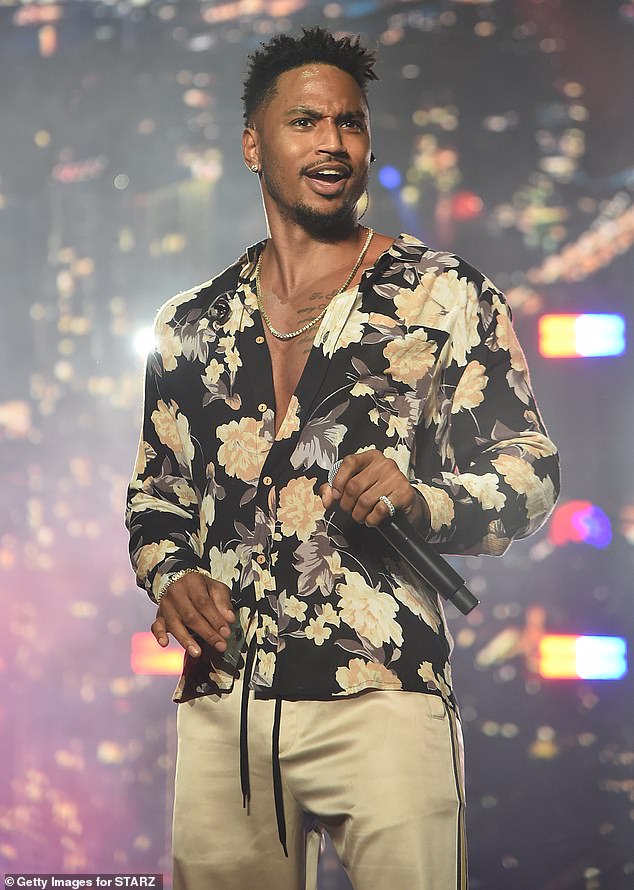 Police altercation: Trey got into a physical fight with a police officer at the AFC Championship Game in Kansas City, Missouri, on Sunday after he reportedly refused to wear a mask. He could be seen fighting with the officer in video obtained by TMZ; seen in 2019

According to the Kansas City Police, Trey was not following the rules of the stadium and would not listen to a request from both a guard and then a policeman to wear a mask.

The video, which was shot from several rows behind where Songz was seated, shows him sitting in his chair as a police officer stands in the row in front of him.

As the officer is grappling with Songz, the singer seems to connect a punch with the officer’s head.

People in the crows are heard shouting while one man says, ‘Trey what are you doing?’

Another man standing to Songz’s right, who appears to be part of the venue’s security staff, also leans down to try to subdue Songz. 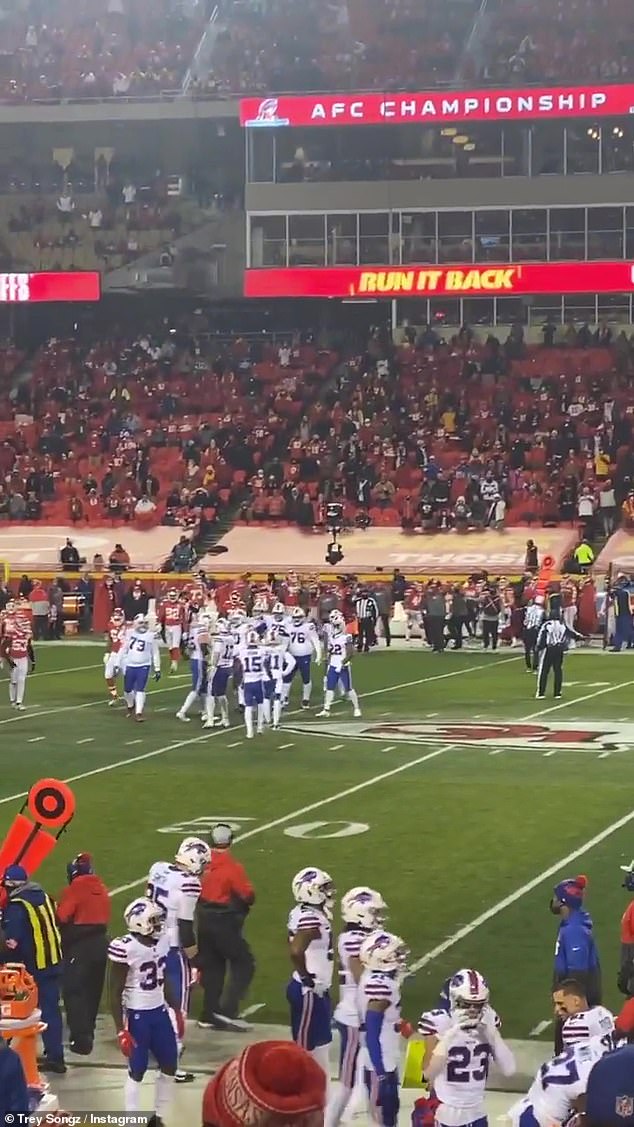 Violent: The video seems to show Songz seated while a police officer standing in the row in front of him leans forward to grab at him, before the singer seems to connect a punch with his head; still from Songz’s Instagram, which doesn’t depict the attack 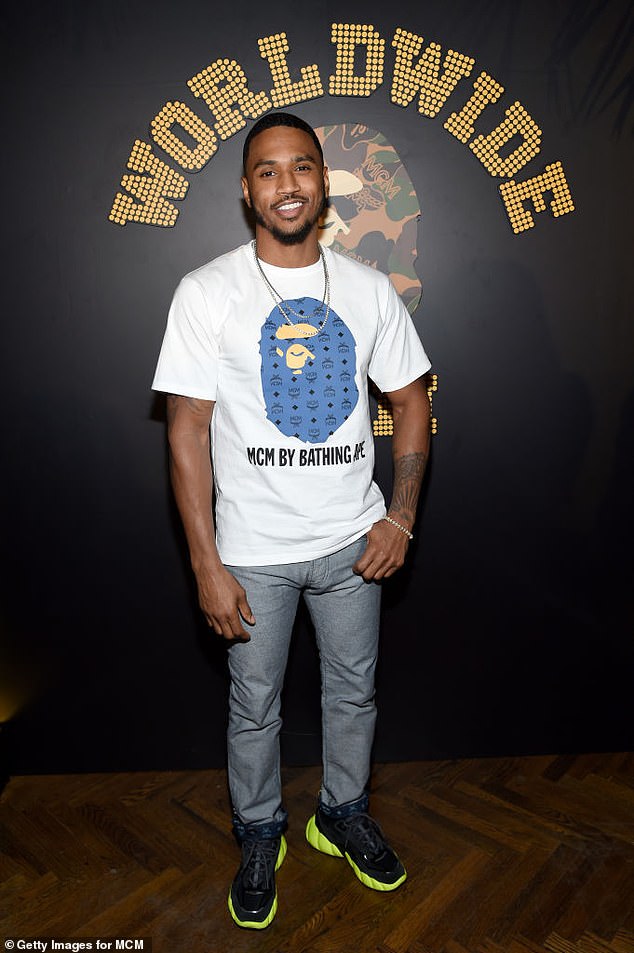 Reinforcements: The officer appears to head butt Songz, who tries to put him in a headlock before security guards assist the officer; seen in 2019 in Los Angeles

As Songz (real name: Tremaine Neverson) stands up and seems to try to free himself, the police officer puts his head down and tries to knock him down while Songz tries to put him in a headlock, and succeeds.

‘Get off of him!’ shouts one person, while another can be heard screaming, ‘What the f***, he didn’t do it!’

‘Arrest the cop!’ a third voice cries out.

But when the officer is in a headlock, several people can be heard telling Trey to let the policeman go in what can be described as a chaotic and dangerous scene.

A witness to the assault claimed that fans a few rows behind Songz had been yelling at the singer.

The Kansas City Police, however, told TMZ that they were asking him to put on a mask and he would not. The police added that it was the fans who called over the security guard in the first place.

It is not clear if the police or Trey was the first to make the argument physical.

Songz was reportedly handcuffed and arrested once additional officers arrived and were able to separate him and the police officer, who appeared to be white. 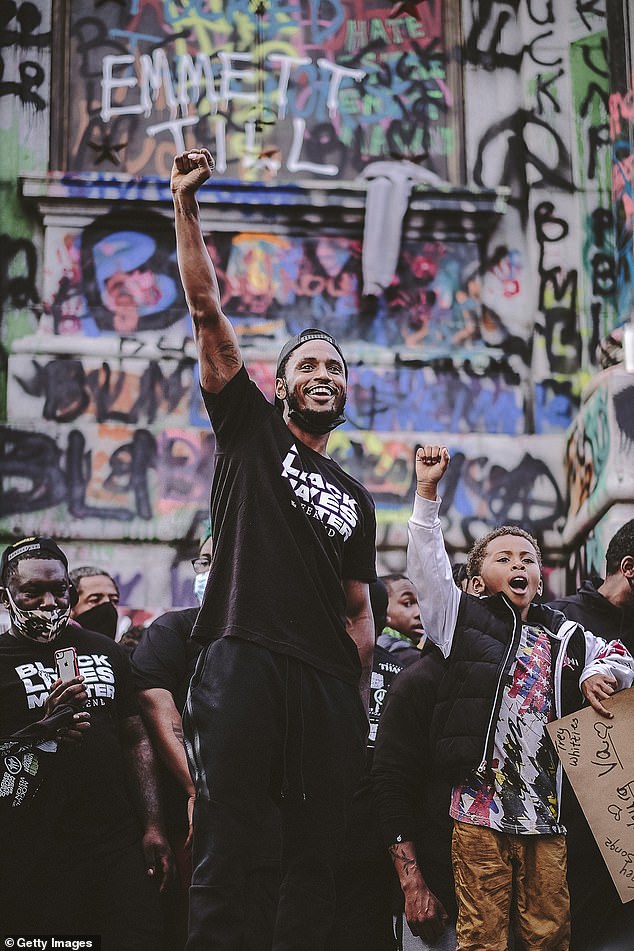 Caught in the crossfire: Fans say people behind Songz heckled him, and after he asked them to calm down, the police officer started the physical confrontation without any warning or reason; seen in June in Richmond, Va. 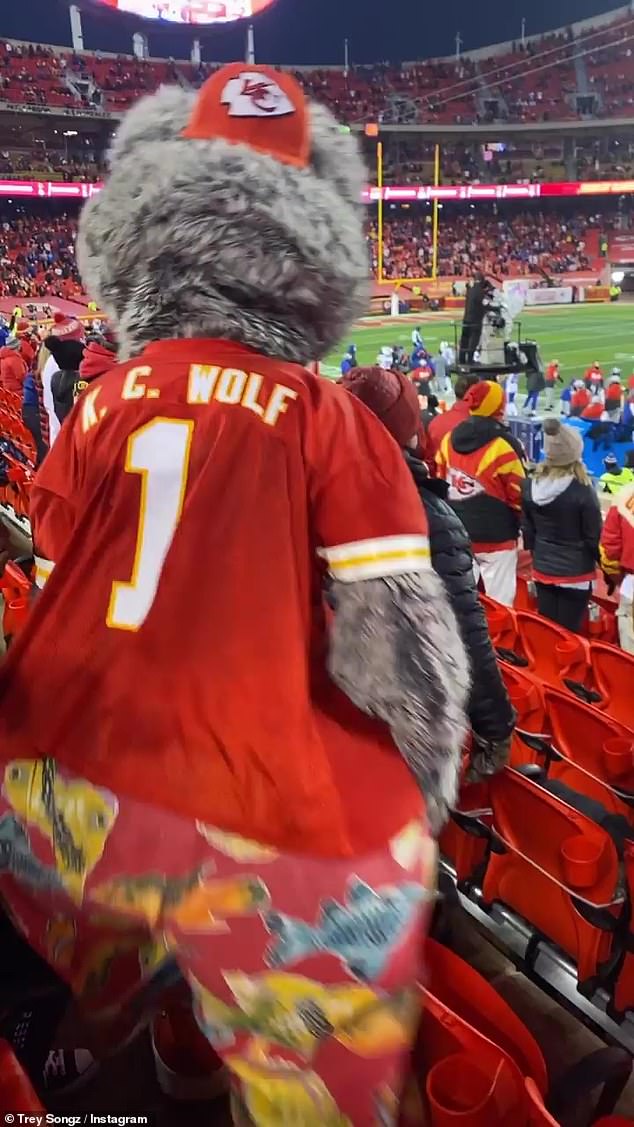 Legal trouble: The rapper is reportedly being held on a 24-hour hold. He’s been charged with resisting arrest and trespassing, two misdemeanors, and assaulting a police officer, a low-level felony

According to a source in law enforcement, Songz was arrested and charged with two misdemeanors, resisting arrest and trespassing, and a felony, assaulting a police officer.

The Can’t Help But Wait singer was reportedly on a 24-hour hold in jail but has since been released from custody, TMZ reported Monday morning.

Earlier in the day, Songz posted on Instagram as he flew on a private jet to the high-profile game, which helped determine the team who would compete in the Super Bowl.

He also shared video of the game, which saw the Kansas City Chiefs defeat the Buffalo Bills 38 to 24. 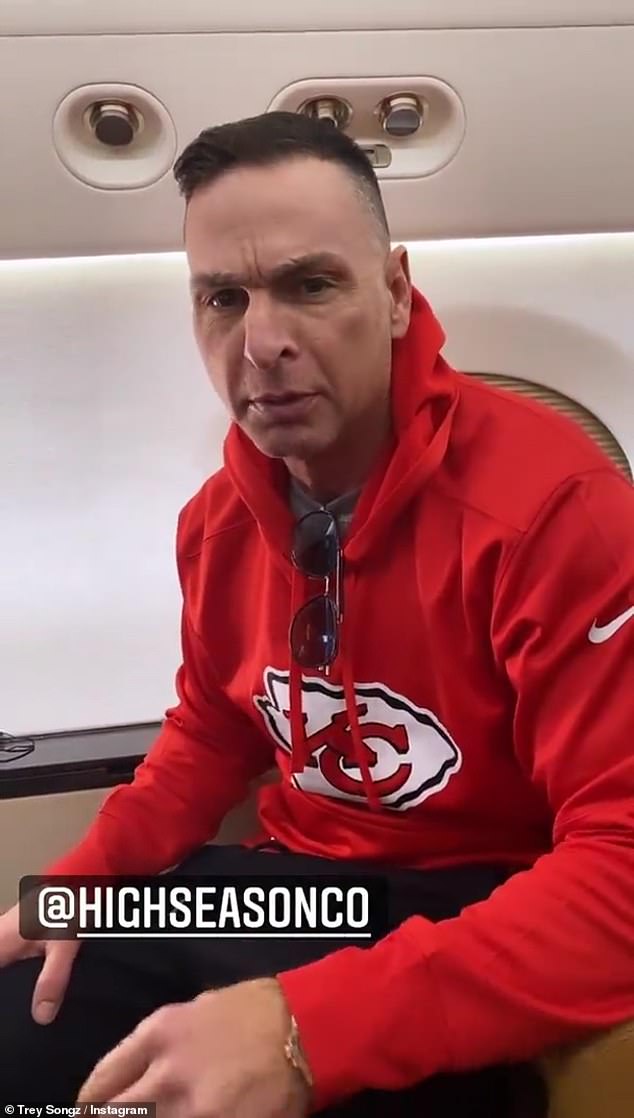 Looking forward to it: Earlier in the day, Songz shared videos of himself and friends about a private jet on the way to the game 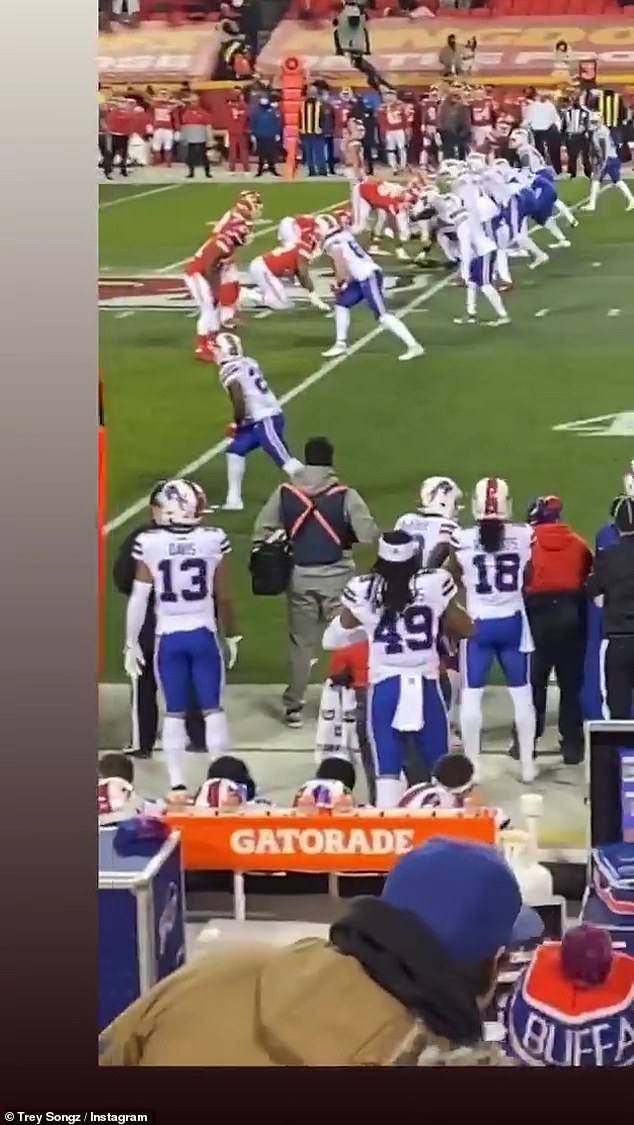 The Kansas City Chiefs defeated the Buffalo Bills 38 to 24, and they’ll face off against the Tampa Bay Buccaneers in the Super Bowl