President piles on Tom Steyer for saying a Democratic president would ‘destroy the economy in 15 minutes’, as he retweets EDITED debate video clip that deletes moment Steyer says it was TRUMP’S opinion

When Donald Trump retweeted a selectively edited clip of rival Tom Steyer in the wee hours of Wednesday morning, he ended up dunking on his own opinion because of how a right-wing group presented the video.

Trump will ‘run on the economy’ in a bid for re-election, Steyer said Tuesday night during a Democratic primary debate in Iowa.

‘He’s already told Americans last month in Florida, ‘You don’t like me and I don’t like you, but you’re all going to vote for me because the Democrats are going to destroy the economy in 15 minutes if they get in control’,’ Steyer said.

Sarah Dolan Schneider, the executive director of America Rising, a conservative message machine known for its opposition research, clipped the final 15 words⁠—’The Democrats are going to destroy the economy in 15 minutes if they get in control’—and tweeted it out of context.

‘I agree with him on this, 100%,’ the presdient tweeted, spreading the deceptive video clip that reflected his own words. 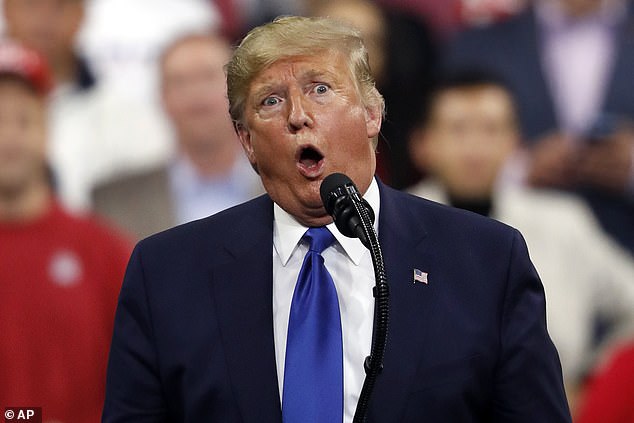 President Donald Trump mocked Tom Steyer for quoting him, after a video emerged that was edited to make it seem like Steyer’s opinion 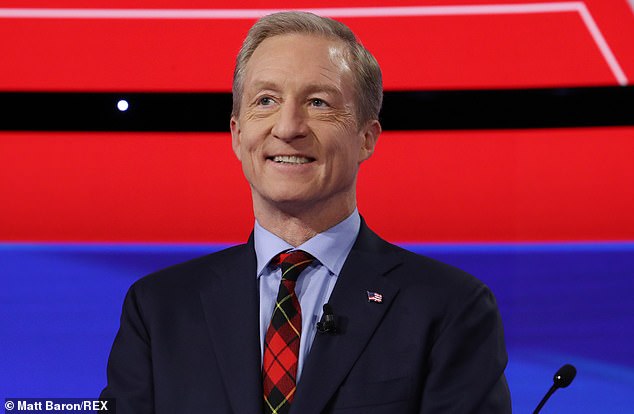 Steyer quoted Trump saying that if a Democrat won the White House the U.S. economy would tank in 15 minutes 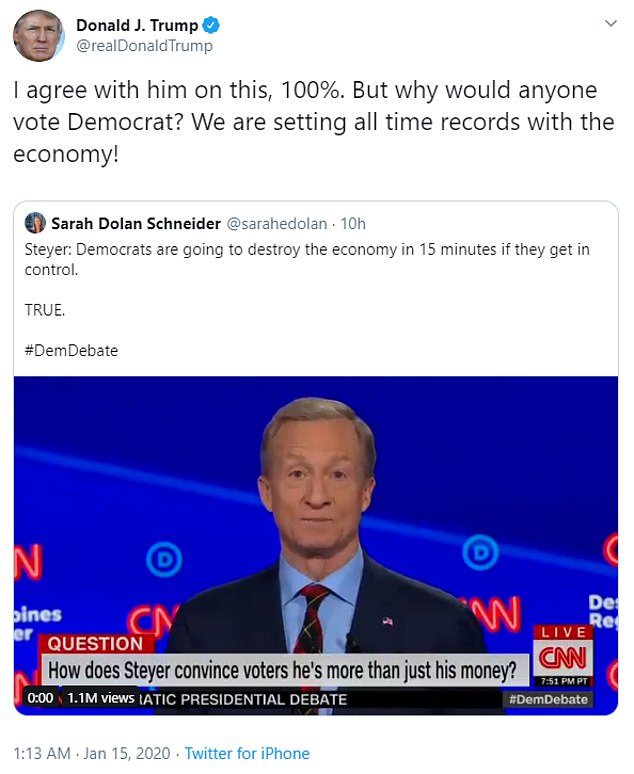 The leader of a conservative, pro-Trump PAC deceptively edited he video to make Steyer out to be an anti-Democrat economy skeptic

Steyer fired back from Des Moines: ‘Read the transcript. It’s actually perfect.’ That’s a reference to Trump’s frequent insistence that a now-famous phone call with Ukrain’e’s president included nothing impeachable.

‘I said you’re a fraud and a failure—and I’ll expose you,’ Steyer added. Now go to bed.’

America Rising, the PAC responsible for the confusion, did not respond to a request for comment.

Steyer, one of two billionaires running to replace Trump, argued Tuesady night that his outside-the-Beltway resume would be a plus in the Oval Office. 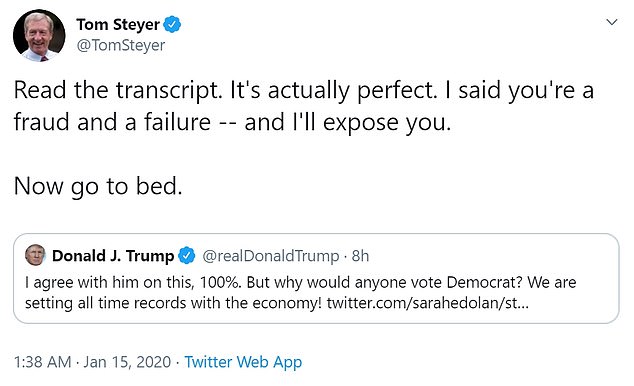 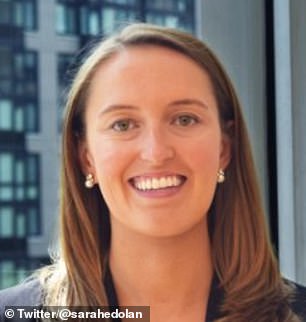 ‘What we are hearing is 20 years of mistakes by the American government in the Middle East,’ Steyer said. ‘It´s time for someone from the outside having a strategic view on what we´re trying to do.’

Steyer is near the top fo America’s wealth scale but appears to own only a few plaid neckties. He has evolved from a cutthroat investor to a single-issue environmental activist.

He has used his money to fund ads in early states that raised his profile enough to clear the debate’s polling and donation thresholds. He has largely been a background presence in previous faceoffs, but Tuesday night he stood out by occupying an unusual niche—the anti-corporate tycoon.

Later, he said his children didn’t deserve a free college education paid for by taxpayers. He also insisted that he has been advocating for a wealth tax longer than the other primary contenders, including the far-left Massachusetts Sen. Elizabeth Warren, who has made it her keystone proposal.

‘The redistribution of wealth to the richest Americans from everybody else has to end,’ he said.