A judge blocked the Environmental Protection Agency from appealing a key ruling in a long-running lawsuit claiming negligence by the federal government in Flint’s lead-contaminated water in 2014-15.

U.S. District Judge Judith Levy ruled in 2020 that Flint residents could sue the EPA. Now, two years later, she said she won’t put the case on hold to allow the government to appeal that decision to a higher court.

Levy said more work must be done by lawyers to develop the case.

“The United States characterizes this complex case as one of merely a series of discrete, clean legal questions — questions it says are all independently controlling, wrongly decided, and subject to reasonable disagreement,” the judge said. “But this is far from the case.”

An appeal in the middle of things fits “only where the quick resolution of a clean question of law could meaningfully speed up the litigation,” Levy said Wednesday.

Starting in April 2014, Flint pulled water from the Flint River for 18 months without treating it to reduce corrosion. The water caused lead to be released from old pipes and into kitchen taps, bathrooms and water heaters. 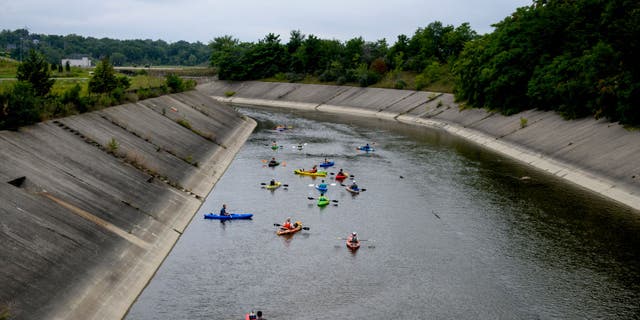 Kayakers journey along the Flint River as part of programming with the Flint River Watershed Coalitions Kayak Flint program on Aug. 7, 2021. Flint, Michigan, has had an ongoing trial regarding lead-contaminated water since April 2014. (Brittany Greeson for The Washington Post via Getty Images)

Much of the blame rested with regulators in Gov. Rick Snyder’s administration who didn’t require corrosion control. The state agreed to pay much of a $626 million settlement with Flint residents, mostly children, who were exposed to the water.

But residents are also suing the EPA, which was aware of complaints about the water and had authority to aggressively intervene. The EPA’s inspector general found that a regional office failed to establish clear roles and responsibilities.

FLINT WATER TRIAL: JUDGE DECLARES MISTRIAL AFTER VERDICT COULD NOT BE REACHED

A federal agency has defenses to negligence claims in court, but Levy so far has rejected them. A separate but similar lawsuit against the EPA is being heard by U.S. District Judge Linda Parker.