Speaking to the press before Saturday’s Cubs-White Sox game in Chicago, La Russa provided his take on remarks made by Kapler Friday, which saw the manager assert that members of the Bay Area ball club would no longer take the field during the anthem.

‘I think he’s exactly right to be concerned… with what’s happening in our country,’ La Russa, 77, said Saturday, adding, ‘He’s right there.’

He went on: ‘There’s a lot of problems in this country that need to be addressed.’

‘Where I disagree is the flag and the anthem are not appropriate places to try to voice your objections.’

The comments come days after nineteen students and two teachers were gunned down by an 18-year-old in Uvalde, sending shockwaves through the country.

Scroll down for video: 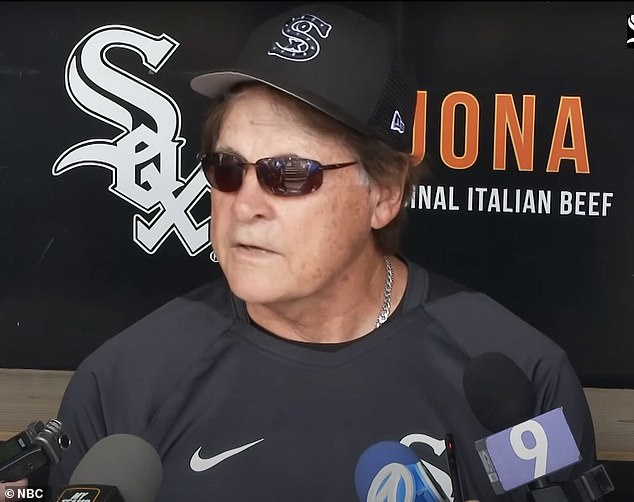 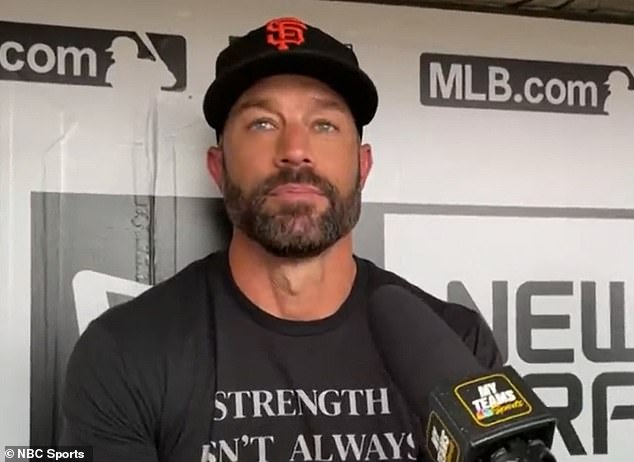 The worst in a surge of shootings seen in US schools over the past decade, the massacre has inspired new debate on gun reform, as the shooter, now-deceased  Salvador Ramos, bought a gun used in the attack days after turning 18.

A slew of celebrities and left-leaning politicians have since come out to express their ire over conservatives’ hesitance to tighten up state gun laws.

On Friday, Kapler, 46, who has coached the Giants since 2019, announced that he will skip the anthem ‘until I feel better about the direction of our country.’

‘I don’t plan on coming out for the anthem going forward until I feel better about the direction of our country,’ Kapler said, wearing a t-shirt that read ‘Strength Isn’t Always Physical.’

‘I don’t expect it to move the needle necessarily, it’s just something I feel strongly about to take that step.’

Kapler – the reigning National League Manager of the Year – went on to double down on those comments later that night, posting a written statement to his website sharing his thoughts on the shooting.

The highly critical op-ed saw the coach – who played on the Houston Texans for several years as a professional before his managing career – question whether the country’s leadership is committed to representing its citizens’ best interests.

He also challenged the widely uttered sentiment that the US is ‘the land of the free and the home of the brave.’

‘When I was the same age as the children in Uvalde,’ Kapler wrote, ‘my father taught me to stand for the pledge of allegiance when I believed my country was representing its people well or to protest and stay seated when it wasn’t.’

He went on to declare: ‘I don’t believe it is representing us well right now.’

“I don’t plan on coming out for the anthem going forward until I feel better about the direction of our country” – Gabe Kapler pic.twitter.com/J1MdlVL3XI

Kapler proceeded to recount details from the shooting, and panned school police officers for mishandling the incident.

‘This particular time, an 18 year old walked into a store, bought multiple assault rifles and hundreds of rounds of ammunition, walked into a school with an armed resource officer and its own police district and was able to murder children for nearly an hour.

‘Parents begged and pleaded with police officers to do something, police officers who had weapons and who receive nearly 40% of the city’s funding, as their children were being murdered.’

Kapler continued: ‘We elect our politicians to represent our interests. Immediately following this shooting, we were told we needed locked doors and armed teachers.

‘We were given thoughts and prayers. We were told it could have been worse, and we just need love.

‘But we weren’t given bravery, and we aren’t free. The police on the scene put a mother in handcuffs as she begged them to go in and save her children.

‘They blocked parents trying to organize to charge in to stop the shooter, including a father who learned his daughter was murdered while he argued with the cops,’ Kapler said.

‘We aren’t free when politicians decide that the lobbyist and gun industries are more important than our children’s freedom to go to school without needing bulletproof backpacks and active shooter drills.’

The Giants boss went on to hone in on the long-held tradition of airing the Star-Spangled Banner at the start of each game, and questioned whether the meaning of the historical song was lost on MLB brass, players, and fans following the shooting.

‘I’m often struck before our games by the lack of delivery of the promise of what our national anthem represents,’ he wrote.

‘We stand in honor of a country where we elect representatives to serve us, to thoughtfully consider and enact legislation that protects the interests of all the people in this country and to move this country forward towards the vision of the “shining city on the hill.”

‘But instead, we thoughtlessly link our moment of silence and grief with the equally thoughtless display of celebration for a country that refuses to take up the concept of controlling the sale of weapons used nearly exclusively for the mass slaughter of human beings.

‘We have our moment (over and over), and then we move on without demanding real change from the people we empower to make these changes. We stand, we bow our heads, and the people in power leave on recess, celebrating their own patriotism at every turn.’

The coach continued: ‘Every time I place my hand over my heart and remove my hat, I’m participating in a self congratulatory glorification of the ONLY country where these mass shootings take place.’

Kapler then proceeded to discuss how the day after the tragedy, ahead of his team’s away game against the Mets Wednesday, he considered kneeling during the anthem – a common method of protest popularized by former NFL player Colin Kaepernick – but decided against it, slamming himself as a ‘coward’ as a result.

‘On Wednesday, I walked out onto the field, I listened to the announcement as we honored the victims in Uvalde. I bowed my head. I stood for the national anthem. Metallica riffed on City Connect guitars,’ he recalled.

‘My brain said drop to a knee; my body didn’t listen. I wanted to walk back inside; instead I froze. I felt like a coward. I didn’t want to call attention to myself. I didn’t want to take away from the victims or their families.

‘There was a baseball game, a rock band, the lights, the pageantry. I knew that thousands of people were using this game to escape the horrors of the world for just a little bit. I knew that thousands more wouldn’t understand the gesture and would take it as an offense to the military, to veterans, to themselves.’

He then declared: ‘I am not okay with the state of this country. I wish I hadn’t let my discomfort compromise my integrity. I wish that I could have demonstrated what I learned from my dad, that when you’re dissatisfied with your country, you let it be known through protest. The home of the brave should encourage this.’

On Saturday, La Russa – formerly the manager of the St. Louis Cardinals and Oakland A’s – asserted the anthem is not something that should be protested, citing the sacrifice’s of America’s military personnel.

‘Talk to any serviceman that put their life on the line,’ La Russa said. ‘When they’re out and around, some of their courage comes from what the flag means to them and when they hear the anthem.

‘To me, it isn’t the flag and the anthem that you want to point out and say “I’m not gonna…I’m going to draw attention by not…” I think it’s a mistake.’

He added: ‘With Gabe, I think it makes more sense to figure out which of those issues and speak about the ones he doesn’t like and what he’ll do about it.

‘I’ll say it, I have great respect for him. I like him, and I think he’s right. But it’s not the flag and it’s not the anthem.’

The Giants’ skipper is no stranger to protest, having knelt for the Star-Spangled Banner during the 2020 season in protest of police brutality.

His actions drew the ire of former President Donald Trump at least once. Kapler said at the time that he wanted to make his players ‘feel safe speaking up.’

‘Looking forward to live sports, but any time I witness a player kneeling during the National Anthem, a sign of great disrespect for our Country and our Flag, the game is over for me!’ Trump tweeted the day after Kapler knelt.

Beginning in September of 2017, when Trump first seized upon the issue at a rally in Alabama, the President has repeatedly voiced his objection to athletes kneeling in protest. Over that time he has mentioned the word ‘anthem’ in no fewer than 30 tweets.

Trump’s tweet came after Kapler’s decision to kneel during the anthem before a July 2020 exhibition against the Oakland Athletics. 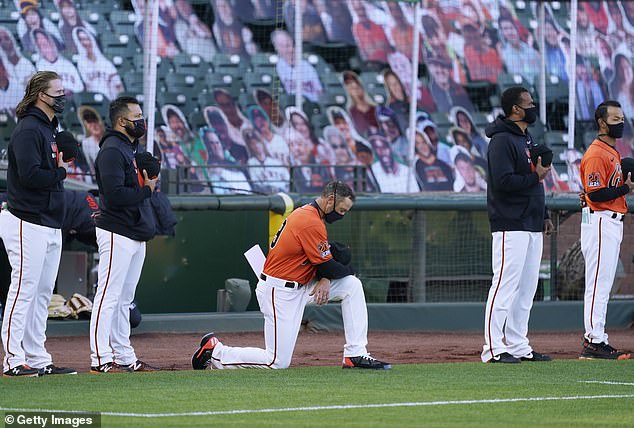 The Giants’ skipper is no stranger to protest, having knelt for the Star-Spangled Banner during the 2020 season in protest of police brutality and appearing to draw the ire of former President Donald Trump at least once 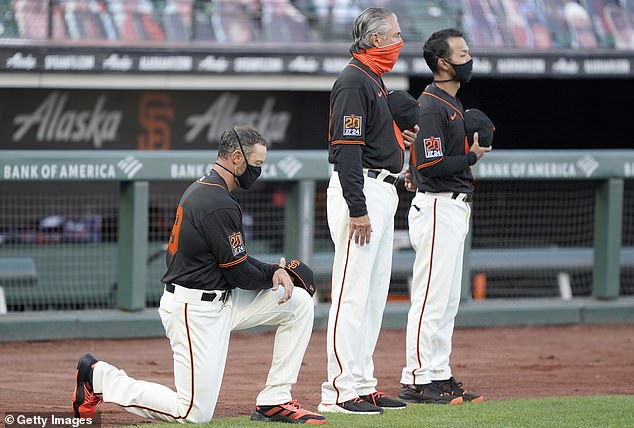 Beginning in September of 2017, when Donald Trump first seized upon the issue, the President has objected to players protesting during the anthem in no fewer than 30 tweets

Kapler, who won the World Series with the Boston Red Sox in 2004 and was previously an MLB analyst for Fox Sports, shares a city with Golden State Warriors coach Steve Kerr, himself outspoken on political issues.

Kerr lost his temper as he demanded background checks for guns in the wake of Tuesday’s massacre at a Texas school that killed 19 children.

The Golden State warriors coach – whose father was shot dead by terrorists in 1984 – spoke at a press conference ahead of his side’s fourth game against the Dallas Mavericks in the NBA Western Conference Final. He was so angry he banged his fist on a table for all to see.

‘We’re not going to talk about basketball,’ Kerr said at the beginning of his team’s press conference. ‘Nothing’s happened with our team in the last six hours. We’re going to start the same way tonight. Any basketball questions don’t matter.’

‘Since we left shoot around 14 children were killed 400 miles from here, and a teacher, and in the last ten days, we’ve had elderly black people killed in a supermarket in buffalo,’ the basketball coach added.

‘We had Asian churchgoers killed in southern California. Now we have children murdered at school. When are we going to do something? I’m tired. I’m so tired of getting up here and offering condolences to the devastated families that are out there. I’m so tired of the – I’m sorry. I’m tired of the moments of silence. Enough.’

Kerr has personal experience of losing a loved one to gun violence. His father, Professor Malcolm Kerr, was shot and killed in a targeted attack while working at the American University of Beirut in 1984. 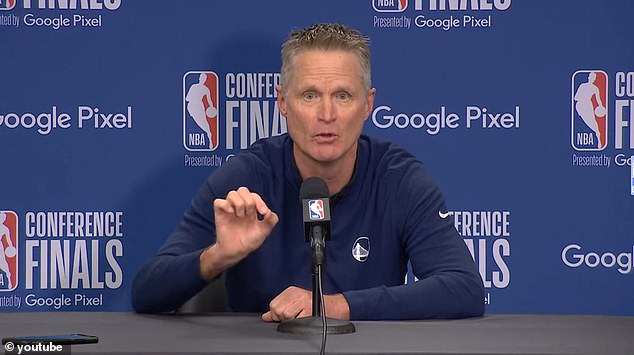 Golden State Warriors head coach Steve Kerr, 56, slammed Congress for not taking enough action on passing stricter background checks on gun registration and purchases at a press conference ahead of his team’s Game 4 encounter against the Dallas Mavericks in the NBA Western Conference Finals