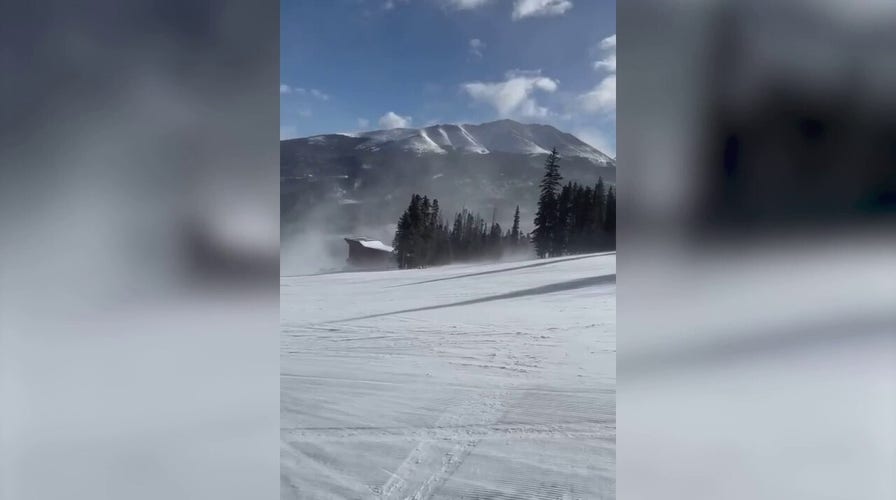 A massive winter storm moving east across the United States is bringing bitter cold and life-threatening temperatures to dozens of states heading into Christmas weekend. A widespread flash freeze is forecast in the Midwest, East and South as heavy rain is accompanied by below freezing temperatures all the way to Florida.

Dangerous wind chills and accumulating snow are expected across a large swath of the U.S., leading to various warnings and cold weather alerts for over 150 million Americans, Fox Weather reported.

As of early Friday morning, Blizzard Warnings are in effect for more than 11 million people in the northern Plains, Upper Midwest and Great Lakes, including Bismarck in North Dakota, Sioux Falls in South Dakota, Rochester in Minnesota, Des Moines in Iowa, South Bend in Indiana, Grand Rapids in Michigan and Buffalo in New York.

Winter Storm Warnings and Winter Weather Advisories have also been issued from the central and northern Plains eastward to the Midwest, Great Lakes, mid-South, central Appalachians and interior Northeast, including the cities of Chicago, Cleveland, Detroit, Indianapolis, Kansas City in Missouri, Milwaukee, Minneapolis-St. Paul and Memphis and Nashville in Tennessee.

‘BOMB CYCLONE’ TO IMPACT HOLIDAY TRAVEL WITH BLIZZARDS, COLD TEMPERATURES ACROSS THE NATION 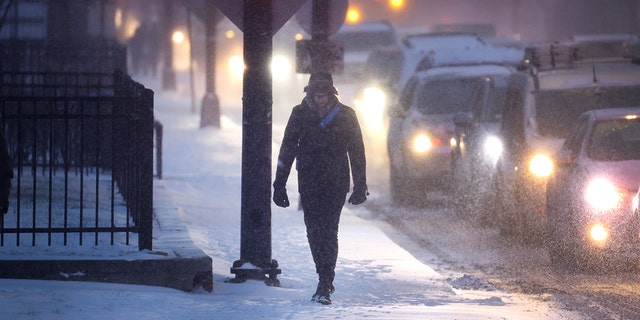 A pedestrian navigates a snow-covered sidewalk as temperatures hang in the single-digits on Dec. 22, 2022 in Chicago, Illinois.
(Scott Olson/Getty Images)

The FOX Forecast Center reports the highest snowfall totals associated with the storm will likely be in the western Great Lakes region. More than a foot of snow could pile up in the Upper Peninsula of Michigan, western Lower Michigan and far northern Wisconsin.

Light accumulations of snow may also be seen as far south as northern Oklahoma, northern Arkansas and portions of Tennessee as an arctic cold front sweeps all the way to the Gulf Coast.

Heavy snowfall of up to 8 inches in less than 24 hours was already reported in Minneapolis-St.Paul Wednesday night, while the Denver metropolitan area recorded between 3 and 6 inches of snow.

A combination of snow and high wind gusts over 50 mph also caused near-whiteout conditions in parts of Colorado and Wyoming on Wednesday. In addition to the snowfall, FOX weather said weather observation sites in the Plains reported temperature drops of more than 30 degrees in under an hour as the arctic front moves east.

According to the FOX Forecast Center, high winds between 40 and 80 mph will likely knock out power to thousands of people across the Great Lakes and Northeast, potentially causing a life-threatening situation.

CHRISTMAS BLIZZARD, ICE STORM COULD LEAVE THOUSANDS ACROSS US WITHOUT POWER AMID BITTER COLD

President Biden confirmed Thursday the White House reached out to at least 26 governors in affected states and is prepared to provide federal assistance.

The president told reporters the storm is “not like a snow day” and those planning to travel for Christmas should leave early before a meeting with the Federal Emergency Management Agency (FEMA) and the National Weather Service (NWS). 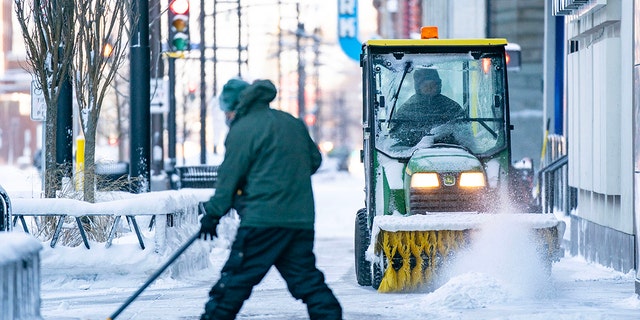 A man shovels the sidewalk while another one clears the snow with a power sweeper Thursday, Dec. 22, 2022 in downtown Minneapolis.
(Alex Kormann/Star Tribune via Getty Images)

The cold air will also surge south and east on Friday, sending record-breaking temperatures as far south as Florida into the holiday weekend.

Friday’s morning low temperatures are expected to be in the teens and single digits in Oklahoma, Arkansas, Tennessee, Texas, Alabama and Georgia leading to Hard Freeze alerts for much of the South. Several other locations across the South may not get out of the teens or 20s on Friday, setting records for lowest maximum temperatures.

The freezing temperatures will likely be some of the coldest in at least five years for many areas east of the Mississippi River, and Wind Chill Advisories extended into the Gulf Coast. For parts of North Texas and Oklahoma, the Wind Chill alerts are the first issued in the area in 11 years.

“Areas like Oklahoma, Arkansas, northern Texas and northern Louisiana, and the Mississippi Delta – you have to be prepared for the cold as well as potential power outages as the wind gusts will be quite strong along with the potential for a freeze,” said FOX Meteorologist Steve Bender.

FOX Weather reported Dallas Fort Worth International Airport may dip below 10 degrees Friday – likely its coldest December temperature since 1989. Nashville’s expected low of around 10 degrees would be its coldest December reading since 2010. Houston will drop to around 17 degrees Friday morning and struggle to reach the freezing mark during the day.

FOX meteorologists said the arctic air will continue on throughout the weekend – even reaching into Florida on Saturday, where low temperatures will drop to near-freezing as far south as Orlandoby Christmas morning.